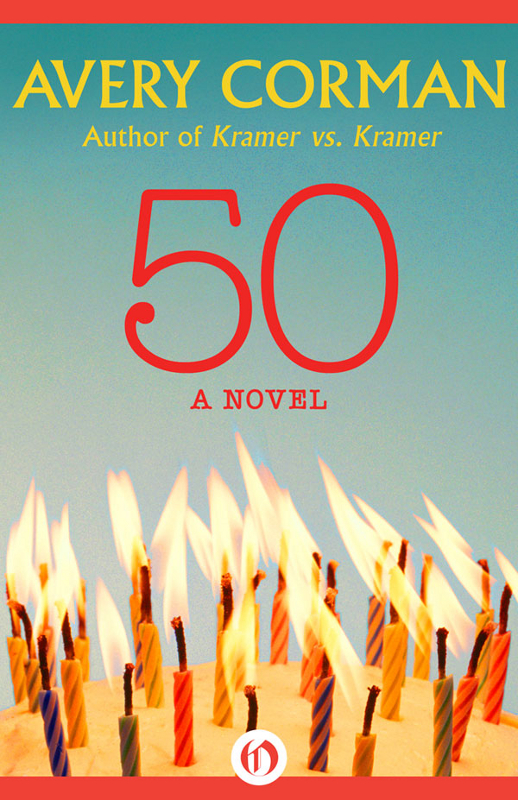 A Biography of Avery Corman

A
FTER THE EYE EXAMINATION
Doug Gardner sat across from Dr. Jeffrey Weiss in an office so dark with its heavy leather furniture, murky brown wallpaper and dim lighting, the only good light a desk lamp on the doctor’s desk, he thought it might have been a psychological ploy. Everyone leaves here thinking he’s going blind and is, therefore, in desperate need of Dr. Weiss’s ophthalmology. Weiss was trim, about six feet tall, with a full head of blond hair. He was probably one of those people who regularly passed Doug on the jogging track in Central Park while Doug slogged along. Everyone passed him. Doug loathed jogging and did it because of the articles, all that evidence about cardiovascular benefits that would keep you alive longer. Nobody gave you an actual number, though. Will one thousand miles of tedious jogging give you an extra six days, six weeks? And when do you get your jogger’s bonus, he wondered. Now, when you’re still able to eat a pastrami sandwich, or at the end when you’re already on a life-support system?

“When was your last eye examination?” Dr. Weiss asked in a sharp tone.

Doug judged this dour man to be in his late 30s. The problem, suddenly, was not the headaches from eye strain or that he was holding his reading matter so far away he was running out of arm length—it was that he was getting older than the doctors.

“About five years ago,” Doug said.

Dr. Weiss did not smile at Doug’s remark. What does this mean? Does he have dire information on his pad?

“You have a typical diminution of focusing abilities for your age group,” the doctor said charmlessly. “Middle-age eyes, I call it. You need reading glasses.”

“Yes. But I’d like to make a suggestion. If you engage in any sports involving a ball, racquetball, tennis, buy yourself a shatterproof eye guard. You’d be surprised at how many men your age I see with serious eye injuries. Let’s face it, your eye-hand coordination starts to go, too.”

“This is turning out to be more than I want to know on the subject.”

“I’ll write you a prescription for the glasses. I suggest you make an appointment to come back in six months.”

Did he have to add the part about eye-hand coordination? Doug had good eyes once, the Eddie Stanky of his day, with an ability to wait patiently and foul off pitches for walks. As he headed along crowded Forty-second Street in Manhattan, another of the people with poor posture, their faces drawn with New York tension, he conceded that getting bases on balls was no longer a marketable skill for him. He hadn’t prided himself on not wearing glasses, the idea of glasses never occurred to him one way or the other. Now that he had to wear them and would continue to have headaches if he did not, he felt as if he were starting to creak, a tin man needing oil. The left shoulder was stiff as well. “Adhesive capsulitis,” the orthopedist had told him. Doug awoke one morning and couldn’t put his left arm in his shirtsleeve. “It’s a mystery sometimes how it gets started. Think of it as similar to tendonitis.” He gave Doug arm exercises to do. Stiff shoulder. Fading vision. Am I becoming a hypochondriac? Or am I beginning to break down? And, frankly, is there any difference?

He entered Vision Opticians on Madison Avenue and was approached by an attractive Hispanic-looking woman in her 20s, almond-shaped eyes behind glasses lightly tinted blue, a wedding band on her finger.

“My first pair of glasses. I have a prescription.”

“We have a thousand frames.”

“I must be in there somewhere.”

She guided him to a seat at a small table with a stand-up mirror and he looked at himself in the first glasses she suggested.

“This is very popular. The Urbanite” she said, showing him a frame that was similar to those of aviator glasses.

He looked in the mirror, barely noticing the glasses, scrutinizing himself. Doug Gardner had a sharp, angular face, as if he had been chipped out of wood by a primitive craftsman in a hurry, a wide nose broken several times in sports as a youth, brown eyes and receding brown hair. Five feet ten, slightly built, his weight was usually in the 150s. He had taken to weighing himself daily of late. Am I good-looking? Would this Hispanic lovely, married, who sees men in this place all day, go home with me? Of course not. But would it be her fantasy, too? I’d settle for that, for it to be her fleeting fantasy.

He appraised himself in the glasses. “These look like aviator glasses,” he said.

“No, this is the Aviator.” She produced a more extreme version of the first.

“Do you have the Bertolt Brecht, the Franz Kafka?”

“We don’t carry that line.”

“Glasses that say this is an intelligent man of character.” She was confused. “Simple, round glasses with a thin wire frame,” he explained.

“Oh, the Librarian!” she said triumphantly.

She found the glasses and he tried them on.

“You look very nice in those.”

Doug checked himself against her salesmanship.

“I’ll take them,” he said, making a final appraisal in the mirror. He had considered himself passable-looking when he was single. Married to Susan, he had felt his best-looking. He loved to walk into public places with her. She was so pretty to him, slender, with large brown eyes, straight black hair, and dimples when she smiled, that is, when she was still smiling.

Doug Gardner lived on West Seventy-eighth Street in Manhattan in an old elevator building, three bedrooms, a living room and an eat-in kitchen. All the furniture had been purchased at Conran’s on one frantic Saturday, a wild dash through the store for beds, a couch, chairs, end tables, dishes, glassware, so that he could create an instant environment. The wall hangings were purchased that same day from the Poster Gallery. He was not going to mope around like some recently divorced men, living in barren rooms out of cardboard boxes and mooning over their wives, the custodians of their personal taste. The children were with him that day to choose the pieces they wanted for their bedrooms. They could barely keep up with him as he raced through the store. When he moved in he had no illusions about the decor—not an antique on the premises, nothing with any depth. But it was done. He didn’t need Susan and her eye. I can do this on my own, thank you. Susan had remained in their original apartment on West End Avenue. She had the furniture of the marriage. He theorized that he could have qualified for an article in the home furnishings section of
The New York Times,
“How I Expunged Any Trace of My Former Life and Former Mate in Just a Few Hours.”

Sexual mores had changed since the first time he passed through as a single man. Under the new ground rules if the woman didn’t want to go to bed with you by the second or third date she wasn’t interested, or you shouldn’t be, and if she did, that still didn’t mean she was interested, or that you were. In the two years since the divorce, his longest relationship was three months with an advertising copywriter who announced one night she was leaving New York to become a creative director at an agency in Chicago. Nothing was to be negotiated between them. This was a career opportunity, she explained, he had children in New York and that was that. After the Sexual Revolution it was the woman as easily as the man who turned over first after sex and went to sleep. And now, following the Feminist Revolution, it was the woman as easily as the man who relocated.

For Doug and Susan Gardner it was as though they had a grocery store where the partners didn’t speak. Doug recalled such a relationship, J & S on Amsterdam Avenue, when he was growing up. Jimmy and Sal were brothers-in-law, separated by an ancient grievance, bound by the business. Like Jimmy and Sal, Doug and Susan dealt with the public and had little to say to each other. They kept a public face for teachers, the children’s doctors, grandparents. When they spoke to each other on the phone, usually discussions of logistics, their tone had the vitality of air-traffic controllers. On some occasions it was required of them to meet each other, such as to look over material concerning the children. They had settled on “their” place, a coffee shop on Broadway and Seventieth Street, so hectic it dictated an abrupt, unromantic encounter. They conducted their business and they left.

Doug and Susan had joint custody of the children. At two-week intervals the children arrived by themselves or were dropped off by the relinquishing parent, who buzzed up on the intercom. Doug thought Larry Hart could have made a lyric out of it if he were still alive. How love becomes buzzing up.

He was a columnist for
Sports Day,
a national daily sports newspaper with headquarters in Houston and bureaus in several cities. The New York office was located in the Chrysler Building, the staff consisting of Doug, who wrote a three-day-a-week column, an editor, a feature writer, and a secretary-receptionist. He had taken this job two years before when the newspaper began operations, leaving the
New York Post,
where he had covered sports events and had written features. Doug’s office was a madhouse of clippings, photos of athletes, souvenirs, awards, luncheonette menus. He had a television set on a table for watching sports events, and he worked on a computer, his copy traveling electronically to Houston. He was paid more than at the
Post,
an important reason for his changing jobs; Doug had discovered that divorce was more expensive than an acrimonious marriage. His colleagues were Pat Lahey, the bureau editor, who edited and expanded wire-service copy of sports events in New York, and Brian Wilkes, who covered the major events on the sports calendar in the city. Wilkes, in his 20s, had a television-age Saturday-morning cartoon style, fast-cutting, nonverbal references, “SPLAT! Winfield thwacked the ball so hard the juice was running out of it, GLUGG!” The secretary-receptionist was Sally Cole, a thin 21-year-old with blue hair, one side of her head shaved in a buzz cut, who on this day was wearing a jump suit made of camouflage material as though the
Sports Day
offices had been placed on military alert.

“I never thought of it.”

I am going on a diet immediately.

“You look about as old as Mr. Lahey and that’s what he is.”

Not so bad. Out of tension from this exchange with a 21-year-old, when the snack wagon came by he ordered a corn muffin and a hot chocolate. The diet would have to wait.

Doug was working on a column about hockey violence when Pat Lahey entered his office. On Doug’s desk he placed a copy of the
Houston Chronicle
turned to the business section. Lahey had marked a paragraph of an article on National Communications, the Houston-based conglomerate that owned
Sports Day.
The chairman of the company was asked about the performance of the newspaper and said he was pleased, but was entertaining several offers for purchase, including one from a Houston group and another from a European syndicate.

The Viceroy's Daughters by Anne de Courcy
Muffled Drum by Erastes
Sirens of the Zombie Apocalypse (Book 2): Siren Songs by Isherwood, E.E.
The Pepper In The Gumbo: A Cane River Romance by Hathaway, Mary Jane
Taking the Heat by Sylvia Day
Death in the Desert by J. R. Roberts
Angelfire by Courtney Allison Moulton
Hope House by Tracy L Carbone
A Blaze of Glory by Shaara, Jeff
Roping The Virgin (Cowboys & Virgins #2) by Riley,Alexa