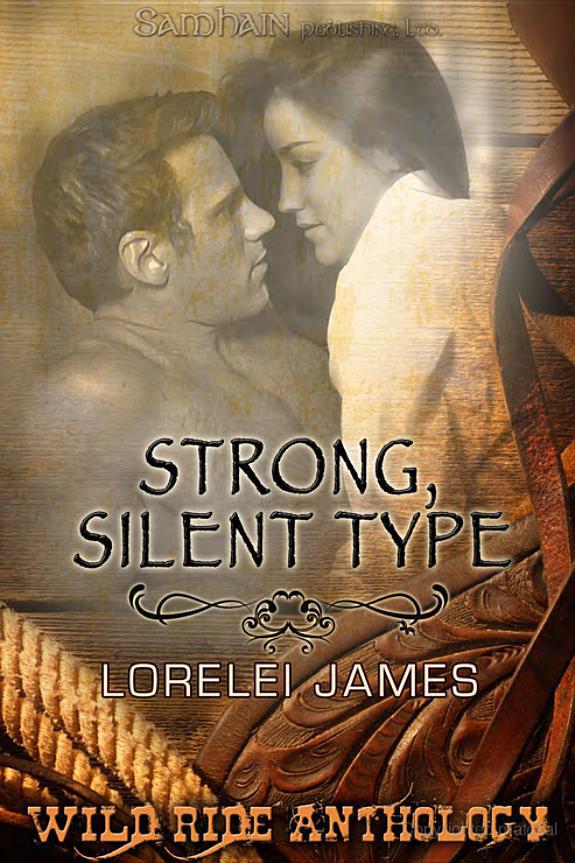 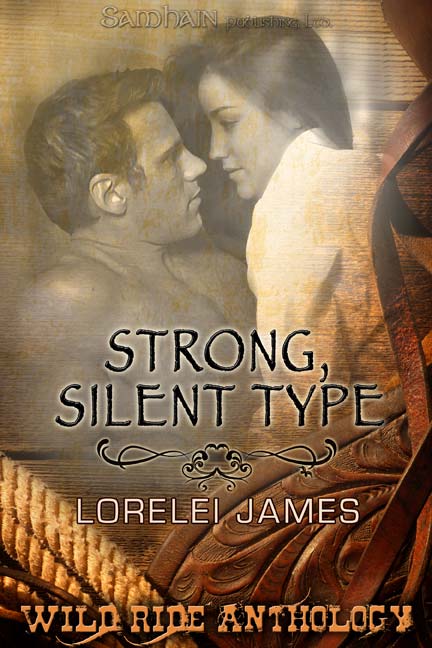 Tough. Taciturn. And a fool for letting her go…

Wyoming rancher Quinn McKay thought he’d only have to bide time until his levelheaded wife came to her senses and called a halt to this “trial separation”. He never believed the marital rough patch would drag on for a coon’s age.

Libby McKay knew when she married the gruff, laid-back cowboy that he wasn’t prone to blathering about his feelings. But three months have passed and her stubborn-as-a-mule husband is still living by himself in the horse trailer. It seems he’d rather hold onto his pride than hold onto her.

Quinn realizes Libby is determined to move on if he doesn’t loosen his tongue and he’ll lose the only woman he’s ever loved. In a last-ditch effort to keep her in his life, he offers her one weekend of uninterrupted sexual decadence.

Reigniting the passion is easy. The hard part comes after the sheets have cooled and they find out if what remains is strong enough to survive past mistakes.

“Get your goddamn hands off my wife.”

Quinn McKay was in a rage. A red rage. An aneurysm-inducing rage. A going-postal rage.

And the worst part? His wife, his helpmate, his lover, his partner, his…everything—goddammit, Libby
was
his everything—didn’t give two shits about his foul mood.

Which enraged him further.

“Walk it off, Quinn,” Libby McKay tossed over her shoulder, letting the young buck lead her deeper into the crowd on the dance floor. The last thing Quinn saw was the sassy head shake of her sassy new hairdo.

“I’m gonna fuckin’ kill him. See how goddamn happy his hands are after I break ’em off at the wrists.”

“Jesus, Q, will you sit the hell down? People are starin’ at you.”

His brother Ben hissed, “Screw that. Get your dumb ass back to the table or I’m leavin’ and you can hoof it home.”

“Be worth it to punch that sonuvabitch in the face.”

“I ain’t bailin’ you outta jail neither.”

Quinn scowled, reluctantly following Ben back to the booth. He drained his cup of beer and poured another from the pitcher. Mostly foam. Didn’t it just figure even the beer wasn’t cooperating with him tonight?

“Oh, you mean quit comin’ to Ziggy’s to watch my wife dance with every good-for-nuthin’ loser in this place?”

“Fuck that.” Quinn slammed his empty cup down. “It’s a free country. I live in this goddamned county. I got just as much right to be here as she does.”

Ben jerked the pitcher away before Quinn dispensed a refill. “It’s been three months since you and Libby separated, Q. Face it. Maybe it’s time you moved on. Looks like she has.”

“Wrong. If Libby is so all fired up to ‘move on’ then why the hell hasn’t she hired a lawyer and filed for divorce?”

“Probably waitin’ ’til school gets out and she has more time.”

His answer resembled a growl.

“I don’t know why you’re so surprised.” Ben poured himself a cup of foam. “You guys’ve been headed down this road for a while.”

“You tellin’ me you were just rollin’ along, mindin’ your own business and wham! Her demand of ‘I want a trial separation’ came from left field?”

Quinn hated—
hated
—talking about this kind of touchy feely crap with anyone. “All married couples hit rough patches. I thought it’d blow over. It always has before.”

“It’s the first time she’s kicked me outta my own damn house.” Three fucking months he’d been living in tin, eating out of tin and sleeping alone in absolute misery.

“So you been goin’ to counseling and shit?”

Sort of. Quinn knew he and Ben weren’t talking about the same type of professional help Libby had suggested. He hedged. “Yeah.”

“Jesus. You are one stubborn sonuvabitch. I can see why Libby is tired of it and booted your ass.”

Stubborn sonuvabitch. A familiar phrase. His normally sweet-tongued wife had hurled those words at him as she’d hurled a suitcase full of his dirty clothes on the front porch. “Fuckin’ great. I’m glad you’re takin’ her side, bro.”

“Quinn, man, no offense, but you suck as a husband.”

Embarrassment flared. Libby’d said that much too. “How the hell do you know? You’ve been married what,
zero
times?”

“Don’t mean I can’t see when something ain’t workin’,” Ben countered. “Obviously your marriage ain’t doin’ so hot. I’d be more’n happy to offer you red-hot tips to fire it back up.”

“Tips from the guy whose last relationship barely passed the one month mark? This oughta be interestin’.”

“No skin off my nose if you’re too proud to accept help. But even as a single guy, I’m aware bein’ a good husband is more than bein’ a good provider.”

Yep. Quinn’s spouse had also tossed that phrase at him. But the irony was that street ran both ways.

Libby ought to realize there was more to being a good wife than having supper on the table, maintaining a spotless house, and cramming his dresser drawers with clean clothes. Not that he’d say that to her, knowing how much it’d hurt her feelings. Why hadn’t Libby realized how deeply it’d cut him when she’d carelessly flung those same words in his face? He sighed. “Go ahead, Ben, wow me with your golden marriage tips.”

“First of all, you have to stop takin’ Libby for granted.”

“Fine then. You gotta show her how much she matters to you. You gotta…woo her.”

“Woo her?” Baffled, Quinn stared at his brother. “How the hell am I supposed to do that?”

“Act like you did when you were dating. Bring her flowers, wine and dine her with candlelit dinners, take her to the movies. Spend time just makin’ out and tryin’ to cop a feel in the truck.”

Quinn leaned forward. “I’m reminding you I’ve been with Libby for fourteen years. We started dating when we were sixteen. I married her the month after she graduated from college. We’ve been man and wife for nine years. So I’m a little rusty on my
wooin’
skills.”

“Then it’s past time to brush up on ’em, Q. Because if you don’t use ’em on her, you’re gonna need to use ’em on someone else.”

And I’m about to lose her.

Quinn shook his head. “Libby’s always been practical. That’s one of the reasons I fell for her. She didn’t need any of the superficial junk other girls did. She didn’t expect me to be a rodeo star or go to trade school. She knew I’d never leave here because ranchin’ is in my blood. She was fine with that. She wanted that life…or so I thought.”

Things—no,
Libby
had changed in the last year. It had started out with small modifications. New furniture, repainting a room or two, hanging new draperies, trying out new recipes from faraway places.

Then she’d started dropping hints about them doing “couple” activities.

When Libby had returned to her job as the school librarian after summer hiatus, she went on a diet and lost twenty-five pounds. He’d always loved her curvy body, but she seemed happier thinner. She’d tossed out her old duds and bought new ones. Gone were the long denim skirts, loose shirts, bulky sweaters, baggy sweats and oversized T-shirts she’d worn for years. Ditto for neutral colors.

No, Libby—his Libby—began wearing tight, low-cut jeans. Clingy blouses that accentuated her ample chest. Short skirts in vivid colors. Just as he was wrapping his head around those changes, she’d trotted off to Denver for a professional makeover. She’d chopped her long, honey-brown hair into a short, trendy cut and added blondish-red highlights. She’d never worn much makeup, so it’d shocked Quinn to see her freckles covered, her lips glossy red and black eyeliner emphasizing her blue eyes.

At that point he’d begun to worry, wondering if she’d met a man she was trying to impress.

When Libby asked him how he liked the “new” her, Quinn replied honestly: He’d liked the old her just fine.

A day later he was living in the horse trailer.

“Dammit. You aren’t even listenin’ to me, are you?” Ben demanded.

Quinn ignored the taunt and focused on Libby sashaying off the dance floor. The smile she allotted her dance partner didn’t reach her eyes like it did whenever she danced with him. Her shoulders were bunched up to her ears. Her normally graceful body movements were forced. Unnatural. She looked as if she were merely going through the motions.

The truth hit Quinn as viciously as a horse hoof to the head. He’d gone about dealing with this misstep in their marriage the wrong way, expecting Libby to come to him.
He
had to fix it, to man up, take the bull by the horns, grab the tiger by the tail, climb on the horse that threw him, reclaim what was rightfully his. Clichéd phrases, but truisms to lead him in the right direction—the only direction—straight back to her.

“Nah. I ain’t been right since she kicked me out, Ben. Dammit. I miss her something fierce.”

Ben froze. “Ah shit, Q, you ain’t gonna start with that,
I love you man
, kinda drunk talk, are you?”

“Hell no.” Quinn shoved the pitcher aside and propped his elbows on the table. “But I have been listenin’ to you yammer on, and you’re exactly right. I’ve gotta do something. And you’re gonna help me.”

“Help me come up with a plan to win my wife back.”

“Second shelf on the bottom row.”

“But you’re the librarian. You always help me.”

“This time is different, sweetie, because your teacher wants you to find the book. It’ll improve your alphabetizing skills.” Libby resisted her impulse to smooth the girl’s puckered brow.

“I wish you were my teacher, Mrs. McKay,” she announced before flouncing away.

I wish I had a little girl just like you.

Libby briefly squeezed her eyes shut.
Don’t go there
. She had enough issues and failures to deal with, thank you very much, starting with the demise of her marriage to Quinn McKay.