Read A Baby for Hannah Online

A Baby for Hannah 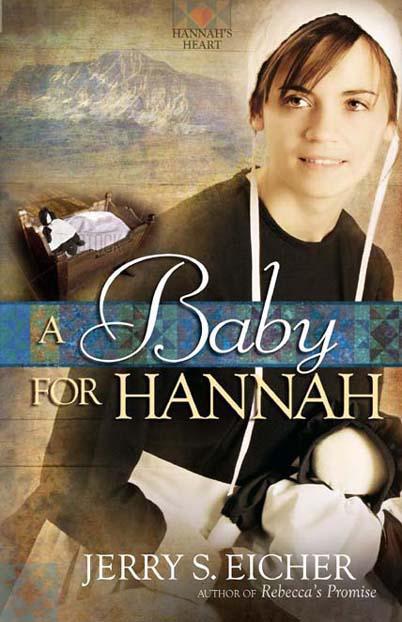 A Dream for Hannah

Having grown up in the Amish faith, author Jerry Eicher (over 220,000 copies in combined sales) treats you to his firsthand knowledge in
A Dream for Hannah.

Hannah Miller’s faith is solid, and her devotion to her family and Indiana community is unquestionable. Yet her spirit longs for adventure and romance. When troubling circumstances give her good reason to spend the summer at her aunt’s Montana ranch, Hannah discovers she has much to learn about life and love.

Her heart is awhirl with emotion as she dreams about her future. Sam, the boy Hannah has known all her life, is comfortable and predictable. Peter is the wild one, the boy who is on
rumspringa.
And Jake is unpredictable, intriguing, and living in the Montana wilderness.

Hoping for a dream come true, Hannah must decide how to fulfill her heart’s desire while staying true to her faith.

A Hope for Hannah

Hannah Miller Byler and her husband live in a small Amish community near Montana’s Cabinet Mountains, and the rough log cabin is far from everything Hannah holds dear. Anxious about her new role as wife and soon-to-be mother, Hannah understands she must learn to control her anxious heart if her marriage is to survive.

Just as they settle into their new routine, Hannah’s husband loses his timber job and answers the call to ministry. With winter pressing in and money scarce, the young couple discover hardships will either drive them apart or draw them closer. Determined to find hope despite fearful conditions, they struggle to survive in this harsh land and bear their responsibilities with grace.

All Scripture quotations are taken from the King James Version of the Bible.

This is a work of fiction. Names, characters, places, and incidents are products of the author’s imagination or are used fictitiously. Any resemblance to actual persons, living or dead, or to events or locales, is entirely coincidental.

A BABY FOR HANNAH

A baby for Hannah / Jerry Eicher.

All rights reserved.
No part of this publication may be reproduced, stored in a retrieval system, or transmitted in any form or by any means—electronic, mechanical, digital, photocopy, recording, or any other—except for brief quotations in printed reviews, without the prior permission of the publisher.

Hannah Byler walked up the graveled lane toward the cabin, her right hand clutching the mail. She glanced down briefly at the letter on top of the small stack. Her mom had written, no doubt to rejoice with her and perhaps to tell her she was praying for her.

As Hannah slowed down to catch her breath, a shadow crossed her face as the dark memories of her miscarriage ran quickly through her mind. It had been only recently that she had known she was with child again, and this time she would make it through the nine months. She
must.
Miscarrying again would be too painful. Jake hadn’t said much, but she knew he watched her in the evenings when he didn’t think she’d notice. He’d glance away when she turned toward him, shadows from the gas lantern playing on his young bearded face. He loved her, Jake did, but Jake was also a preacher now. And for that reason—in addition to all the others—she must carry this child to full term.

Careful What You Ask For by Candace Blevins
Collected Stories Of Arthur C. Clarke by C., Clarke, Arthur
Windfallen by Jojo Moyes
The Great Pony Hassle by Nancy Springer
After the Crash by Michel Bussi
Alliance by Lacy Williams as Lacy Yager, Haley Yager
When Everything Changed by Wolfe, Edward M
Love Isn't Blind 2 by Sweet and Special Books
Valley of the Moon by Bronwyn Archer
Summer of Yesterday by Gaby Triana