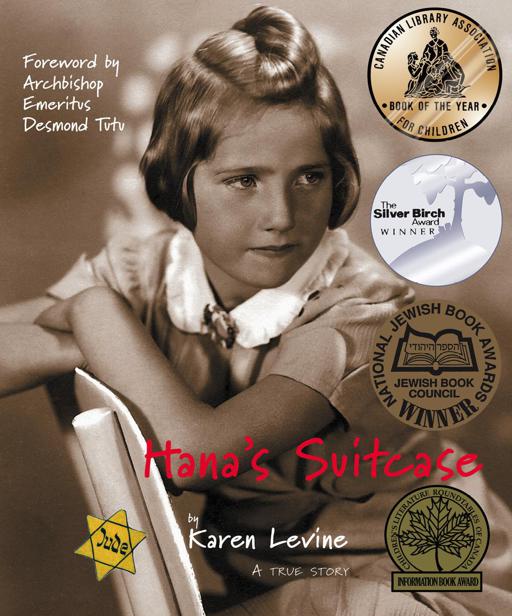 Document on page 73 from the Terezin Ghetto Museum. Reprinted with permission.
Photo of modern-day Terezin by Kathy Kacer.
Photo of Fumiko and George Brady courtesy The Chugoku Newspaper.

Second Story Press would like to thank George Brady and his family for generously allowing us to use his family photographs and documents in this book. We would also like to express our appreciation to Fumiko Ishioka and the Holocaust Education Resource Center in Tokyo for sharing their photographs and materials here as well. We are grateful to Ludmilla Chládková from the Terezin Ghetto Museum (which rarely closes) for her on-going support.

Second Story Press gratefully acknowledges the support of the Ontario Arts Council and the Canada Council for the Arts for our publishing program. We acknowledge the financial support of the Government of Canada through the Book Publishing Industry Development Program, and the Government of Ontario through the Ontario Media Development Corporation’s Ontario Book Initiative.

For my parents,
Helen and Gil Levine.

Hana’s Suitcase
is a true story that takes place on three continents over a period of almost seventy years. It brings together the experiences of a girl and her family in Czechoslovakia in the 1930s and 40s, a young woman and a group of children in Tokyo, Japan, and a man in Toronto, Canada in modern times.

Between 1939 and 1945, the world was at war. Nazi dictator Adolf Hitler wanted Germany to rule the globe. At the center of his vision was the brutal elimination of the Jewish people from the face of the earth. To get rid of his “enemies,” he set up dozens of prison camps — called concentration camps — across Europe. Jewish women, men and children from almost every country on the continent were deported; they were torn from their homes and sent to the camps, where they endured terrible suffering. Many people died of hunger and disease. Most were murdered. In these death camps and elsewhere — where Hitler’s followers carried out his terrible plan — six million Jews were killed. One-and-a-half million Jewish children were among them.

In 1945, the war ended and the entire world learned the horrors of what had gone on in the concentration camps. Since then, people have been trying to understand more about what is today known as the “Holocaust,” the worst example of mass murder — or genocide — in human history. How did it happen? How can we make sure it will never happen again?

In Japan, a country allied with Nazi Germany during the Second World War, attention to the history of the Holocaust is relatively new. An anonymous Japanese donor, who wanted to contribute to global tolerance and
understanding, decided it was important for young people in Japan to learn more about this aspect of world history. Single-handedly, this donor has endowed the Tokyo Holocaust Education Resource Center, which is dedicated to that purpose.

At a Children’s Forum on the Holocaust held in 1999, two hundred students from schools in the Tokyo area met Holocaust survivor Yaffa Eliach. She told them about how almost every Jew in her village, young and old, was
murdered by the Nazis. At the end of her talk, she reminded her audience that children have the power “to create peace in the future.” A dozen of the young Japanese people there took her challenge to heart and formed a group called “Small Wings.” Now the members of Small Wings, aged eight to eighteen, meet every month. They publish a newsletter, help run the Tokyo Holocaust Education Resource Center and work to interest other Japanese children in the history of the Holocaust. They do their work under the guidance of Fumiko Ishioka, the director of the Tokyo Holocaust Center.

The suitcase — Hana’s suitcase — is a key to the success of their mission. In it lies a story of terrible sadness and great joy, a reminder of the brutality of the past and of hope for the future.

REALLY, IT’S A VERY ORDINARY LOOKING SUITCASE.
A little tattered around the edges, but in good condition.

It’s brown. It’s big. You could fit quite a lot in it — clothes for a long trip, maybe. Books, games, treasures, toys. But there is nothing inside it now.

Every day children come to a little museum in Tokyo, Japan to see this suitcase. It sits in a glass cabinet. And through the glass you can see that there is writing on the suitcase. In white paint, across the front, there is a girl’s name: Hana Brady. A date of birth: May 16, 1931. And one other word:
Waisenkind
. That’s the German word for orphan.

The Japanese children know that the suitcase came from Auschwitz, a concentration camp where millions of people suffered and died during the Second World War between 1939 and 1945. But who was Hana Brady? Where did she come from? Where was she travelling to? What did she pack? How did she become an orphan? What kind of girl was she and what happened to her?

The children are full of questions. So is the director of the museum, a slender young woman with long black hair named Fumiko Ishioka.

Fumiko and the children gently take the suitcase out of the glass case and open it. They search the side pockets. Maybe Hana left something that would be a clue. Nothing. They look under the polka-dot lining. There are no hints there either.

Fumiko promises the children to do everything she can to find out about the girl who owned the suitcase, to solve the mystery. And for the next year, she becomes a detective, scouring the world for clues to the story of Hana Brady.

Hana’s suitcase. Though she spelled her name with one “n,” the German spelling has two, as on the suitcase.

IN ROLLING HILLS
in the middle of what was then Czechoslovakia, in a province called Moravia, there was a town called Nové Město na Moravě. It wasn’t big, but it was famous. And in the winter, especially, it was a very busy place. People from all over the country came to cross-country ski in Nové Město na Moravě. There were races to be raced. There were trails to be blazed and there were frozen ponds for skating. In the summer, there was swimming, sailing, fishing and camping.

The town of Nové Město na Moravě and its surroundings.

Nové Město na Moravě was home to 4,000 people. Once the town was well known for making glass. But in the 1930s, people worked in the forests and in little workshops that made skis. On the main street, there was a large, two-story white building. It had a two-story attic. And in its basement, a secret passageway led to a church on the town’s main square. In olden days, when the town was under siege, it was used by soldiers to store food and supplies for the people of Nové Město na Moravě.

The town’s general store was on the ground floor. There, you could buy almost anything — buttons, jam, oil lamps and rakes, sleigh bells, stones for sharpening knives, dishes, paper and pens and candy. On the second floor lived the Brady family: father Karel, mother Marketa, Hana and her big brother George.

Father worked six days a week in the store. He was an athlete, known to almost everyone in Nové Město na Moravě for his love of soccer, skiing and gymnastics. He was also an amateur actor with a big booming voice that could be heard from one end of a playing field to the other. Because of this, Father was chosen to call the cross-country ski races over a megaphone, so that everyone could hear the action. He was a volunteer firefighter who, with other men from the town, rode the fire engine to help people in emergencies.

The Brady family opened their home to artists of all kinds — musicians, painters and poets, sculptors and actors. When they were hungry, they could always find a hot meal, produced by Boshka, the family housekeeper and cook. And their artistic talents found an eager audience, which, of course, included two impish children — Hana and George. Sometimes George was called upon to play his violin. Hana was more than willing to demonstrate her skill on the piano to anyone who would listen. And in the middle of the living room, there was a record player that was cranked up by hand. Hana played her favorite song — “I Have Nine Canaries” — over and over again.

Hana in costume for a school play.