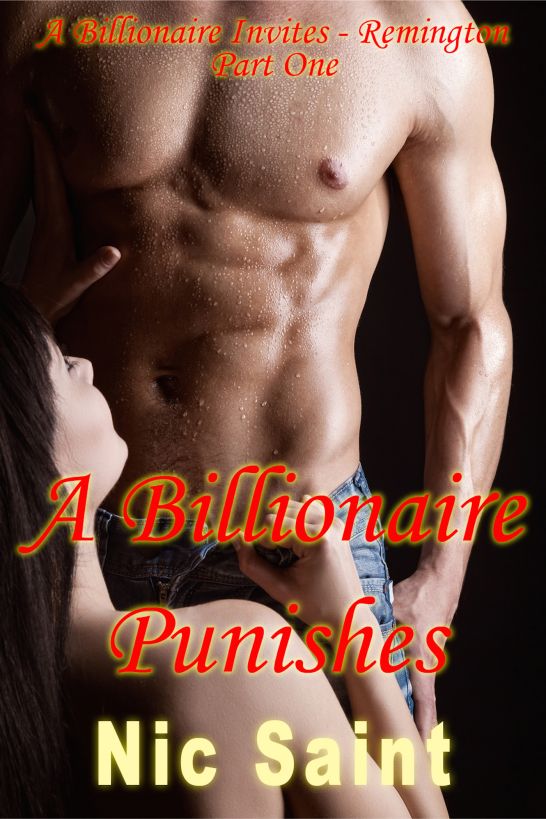 Description
: Erin Gould works as a
customer service agent for Flowers For You, an online flower
delivery business run by ruthless businesswoman Celeste Carter.
When a competitor launches Hearts & Flowers and starts nibbling
away market share, Celeste arranges for Erin to get hired by the
newcomer and steal their innovative web design. The moment Erin
meets Remington Carswell, the handsome billionaire owner of Hearts
& Flowers, an instant and unexpected attraction between them
ruins whatever plans she had. But when Remington finds out Erin’s
secret mission, he sets up a punishment that will either break her,
or give her so much pleasure, she just might have to beg him never
to stop.

Length
: This is the first part in the 3-part A Billionaire Punishes
serial, about secretary Erin Gould and her unexpected romantic
entanglement with her billionaire boss Remington Carswell. 15,110
words. Two more parts follow this first part, and the three parts
will also be bundled into a novel.

The first novel in this series (also
serialized) is A Billionaire Invites - Templeton, about Remington’s
older brother. More stories in the Carswell family saga will
follow.

This book is a work of
fiction. Names, characters, places and incidents are either
products of the author’s imagination or used fictitiously. Any
resemblance to actual events, locales, or persons, living or dead,
is entirely coincidental. All rights reserved. No part of this
publication can be reproduced or transmitted in any form or by any
means, electronic or mechanical, without permission in writing from
the author or publisher.

The voice belonged to Tamara, my co-worker
and best friend, and intruded on a perfectly good daydream I’d been
entertaining about my online cupcake store. Not that I had an
online cupcake store. But God willing, one day I would have. I
hoped. I guess that’s why they call it a daydream, right?

I dragged myself over to Tamara’s cubicle
and followed her pointing finger. All I could see on the screen
were flowers. Lots of them. And since flowers were all I saw all
day anyway, I groaned.

She fixed me with those shiny eyes of hers.
“But this is not our site. This is the new kid in town. And he’s
kicking ass.”

She pointed again, and I squinted at the
URL. “Um, heartsandflowers dot com. So? Everybody and their
mother-in-law have a flower site these days.”

“Only this one is going through the roof.
They just started three months ago and already their business has
quintupled. Or sextupled. Or whatever. They’re selling more flowers
than we do now.”

“Great,” I said, not interested. “At least
when Celeste goes belly-up, we know where to send our résumés.”

“They say it’s run by one of the Carswells,”
Tamara continued, still sounding like an excited puppy.

I frowned. “The Carswells? Who are those?
Some new band?”

She punched me playfully on the arm. It
hurt. Tamara is a big woman compared to me—well, that isn’t saying
much, of course, since I’m pretty much a midget.

“You’ve never heard of the Carswells?”

“No,” I said defensively, rubbing the sore
spot. “Should I?”

“Yes, you should,” she said emphatically.
“They’re only one of richest families in the country.”

“So?” I still wasn’t interested. So what if
they were rich? Didn’t make much difference to me. I was still dirt
poor.

“So? So imagine what happens if a Carswell
goes into the flower business. All the other competitors can pretty
much pack it in. Remember what happened to bookstores once Amazon
got up to speed?”

“I still don’t see why I should care,” I
said. “So a new online flower retailer starts up. So he’s going
gangbusters. Yay for him. Or her. What do we care? We’ll still be
working our asses off listening to unreasonable customers ranting
and raging and giving us shit morning, noon and night.”

Tamara leaned in, her eyes scanning left and
right for eavesdroppers. I gave her an eyeroll but leaned in
anyway, deciding to humor the poor sap.

“I know someone who knows someone who works
for one of their suppliers,” she whispered. “She tells me Hearts
& Flowers treat their staff like royalty. Bigger paycheck,
better working hours, and their website and distribution are all
top of the line so practically no disgruntled customers.”

“Sounds like a dream,” I said, thinking of
the way Celeste was running Flowers For You, the company we were
working for.

“Doesn’t it?” she said brightly. “That’s why
I’ve applied for a job there.”

“No,” she added, her voice dropping to a
whisper once more. “I’ve applied for the both of us. Isn’t that
neat?” And she gave a little squeal of excitement.

“I did too! And I suggest we make a pact
right now that it’s either the both of us or neither. Like a
package deal, you know what I mean?”

I was still too busy staring at her,
stunned, to think of a reply.

“I knew you would be thrilled,” she said.
“Of course, since I just sent the message last night, don’t expect
an answer immediately.”

“I’m speechless,” I said, plunking my bony
tush down on her desk. “You just put me up for a job without even
asking?”

She shrugged. “I know you hate it here as
much as I do, so it was a no-brainer, really. Now when we’re
invited for our job interviews, I think it’s important we give them
the same story. Let’s meet at Marcy’s so we can discuss.”

“But, Tamara!” I cried—but just then her
phone hummed and she quickly tapped her headset.

“Flowers For You this is Tamara Dunkle
speaking how can I help you?” she rambled off, giving me a cheeky
wink.

I returned to my seat and saw that I’d
missed two calls while I was chatting with my friend. Celeste would
definitely chew my ass off. Every dropped call showed up on the
daily stats and had to be justified. Oh, hell. Perhaps Tamara was
right. Time to get out of this hell hole and land ourselves another
job. Flowers For You was pretty much the worst employer I’d ever
had, so any job was probably an improvement.

Then my phone dinged and I sighed, before
putting on my cheeriest voice and singing, “Flowers For You good
afternoon this is Erin speaking how can I help you?”

“My office. Now,” a voice barked into the
headset, then disconnected, and I felt an instant adrenaline rush
coursing through my veins. Celeste. Yikes, what had I screwed up
now?

Ten seconds later I entered the big boss’s
lair at the end of the hall, my heart in my throat and my voice
reduced to a squeak. Celeste always had that effect on me.

“You called me?” I squeaked.

I took a seat in front of her, nervously
wringing my hands. It’s one thing to dream of landing another job,
but quite a different one to be given the boot, which was I’d come
to expect every single time I was called into her office like this.
I had no idea what I’d done wrong, but I was sure I was about to
find out in the worst possible way.

“Erin,” she said, glaring at me. “I was
checking your résumé just now.”

Oh, Lord, this was it. She was going to kick
me out.

“I noticed that you used to work as a
secretary for…” She checked something on her screen. “Lupus
International.”

I nodded vigorously. “Shoes,” I squeaked. “I
worked for one of the managers.”

“Were you any good?” she said.

“Erm… Sure,” I said, wondering where this
was going.

She grunted what I interpreted as an
approval. “I’ve got a job for you,” she said, swiveling a bit in
her office chair, then adjusting her dress, revealing a bit more
cleavage. Damn those boobs. I wondered for the umpteenth time if
she’d had them worked on; no woman has boobs like that. At least
not if she’s human. Perhaps Celeste came from another planet?

“We have a new competitor.” She tapped her
keyboard, then turned her computer screen to me, showing me the
exact same home page Tamara had been gushing over. “Hearts &
flowers. Opened up three months ago and already they’ve swallowed
up thirty percent of our market share. Thirty fucking percent!”

“That’s not good,” I mumbled, though
inwardly I cheered for those pesky H&F people. Go, Carswell,
whoever you are.

“Damned right it’s not good. They’ve got the
most innovative site design in the business. Must have cost them a
fortune in R&D.”

She tapped her long nails on her blotter,
studying me closely. I wilted under her scrutiny, like a delicate
flower in the hot sun.

“How do you feel about corporate espionage,
Erin?” she suddenly said, her eyes narrowing.

“Illegal shmegal,” she scoffed. “Look, this
Carswell character is dishonest. You can’t just come in and wreck
established businesses like that. He’s not playing it fair and
square. He’s thrown his family’s billions at this new hobby of his
and it’s costing us customers. Every. Goddamned. Day.” She hammered
her desk with her fist to emphasize these words, and I shrank a bit
more with every smack.

“That’s why I’ve managed for you to go over
there and find out as much as you can about his business, more
particularly his website.”

“Tomorrow morning you’re starting as
Remington Carswell’s new private secretary. A little birdie told me
the old one left her post and he urgently needs a new slave. I
pulled some strings and bam! You’re it.”

“I’m… the slave…” I repeated, dazed and
confused.

She fixed me with a glare, wagging a long
black-nailed fingernail in my face. “If you breathe a word about
this to anyone, I’m coming after you with all that I’ve got,
understood?”

“Good girl. I knew I could rely on you. Now
let’s talk details.”

For at least an hour, she explained to me
all the intricacies of her devious plan to steal the secret success
formula that lay at the core of Hearts & Flowers, so she could
implement it at Flowers For You and drive Carswell, “and the
friggin’ horse he rode in on”, out of business so fast he’d never
knew what hit him. Well, I knew what was going to hit him.
Apparently I was.

“While you’re over there, put in a good word
for me, will you?” said Tamara, a little breathless. “Or better
yet. You can probably access their personnel files. Give mine a
makeover so that I come out as the top candidate. That way we’ll be
working at the same company!”

“We won’t be working at the same company,
Tamara,” I said. “Because I’ll be in jail and you’ll get canned
when Celeste is forced to declare bankruptcy!”

We were convening at Marcy’s, a coffee shop
that doubles as our after-work whine and dine hangout—lately more
whining than dining I must confess, for neither Tamara or I were
very happy with our work situation.

“As always you’re just being negative,” she
said with a dismissive wave of the hand.

A waitress came over, wrongly interpreting
Tamara’s gesture as a sign we were ready to order. It was the same
perky emo girl with the black hair, black make-up, black clothes
and three nose piercings who was always on duty around this time of
day.

“What can I get you girls?” she said,
chewing away at a piece of gum.

“A double whisky. On the rocks,” I said,
holding my head in both heads to prevent it from exploding.