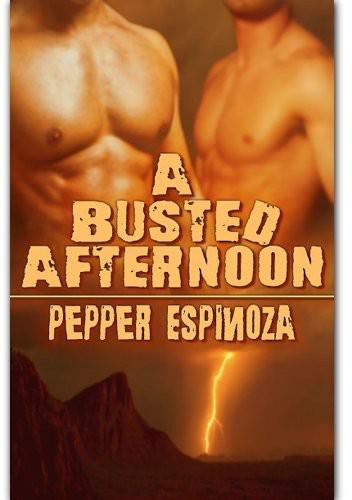 A Busted Afternoon
An Amber Quill Press Book
This book is a work of fiction. All
names, characters, locations, and incidents are products of the
author’s imagination, or have been used fictitiously.
Any resemblance to actual persons living or dead, locales, or events is entirely coincidental.
Amber Quill Press, LLC
http://www.AmberQuill.com
http://www.AmberHeat.com
http://www.AmberAllure.com
All rights reserved.
No portion of this book may be transmitted or
reproduced in any form, or by any means, without permission in writing
from the publisher, with the exception of brief excerpts used for the
purposes of review.
Copyright © 2009 by Pepper Espinoza
ISBN 978-1-60272-558-4
Cover Art © 2009 Trace Edward Zaber
Layout and Formatting
Provided by: Elemental Alchemy
Published in the United States of America
Also by Pepper Espinoza
…And To Hold
Elected
A Farewell To Angels
Four O’Clock
Fumble Recovery
(Just Like) Starting Over
Making Waves
Maybe I’m Amazed
My Only Home
The Obsolete Man
Peanut Butter Kisses
The Prince Who Never Smiled
Quarterback Sneak
The Streets Of Florence
Surrender’s Edge
To Bend
Chapter 1

When it started to rain, Sammy Neff
laughed. A full-throated, resonant sound. One that came from deep in
his body and erupted from him in a sort of orgasm of joy. Only, to Ed
Sorenson’s ears, Sammy didn’t sound very amused. There was a sort of
tinny, annoyed quality to the laughter. One that betrayed Sammy’s
undeniable frustration as the sky opened in an angry torrent. The
entire drive from Evanston had been uneventful, the two of them
enjoying a companionable silence for most of the journey. Just an hour
before, they had been humming along with “All the Young Dudes” and the
sky had been clear across the salt flats.

“Get in the car!” Ed shouted, sticking his head out the window, becoming drenched in an instant.

“You’ll get sick if you stay out in the
rain.” And the last thing either of them needed was to catch pneumonia.
Ed didn’t want to die on their first trip away from home, and all the
warnings from his mother echoed through the years. She would have a
heart attack if she saw Sammy standing without a coat in the rain. On
the other hand, it was probably bad enough that her eighteen-year-old
son, her only boy, had decided to take off without more than a day’s
warning.

“Just get in the damned car before you
catch your death. If anything happens to you, I’m going to be stranded
out here. Probably ‘til I die.”

Sammy looked around the lifted hood, and
now he had a genuine smile. His blond hair hung in his face, and he
looked distinctly like a wet puppy. If he had a tail, he would be
wagging it. “You’re not going to die out here.”

“I will if you’re not here to help me!”
Ed was forced to shout over the roar of the water. He wouldn’t be
surprised if there were flash flood warnings in the area. He thought
about making a crack about needing an ark, but the jokes could wait
until Sammy wasn’t being bombarded by the rain. Ed hadn’t even thought
to pack a slicker. He wouldn’t need it where he was going, and the last
thing he had expected was to be stranded on the side of the road, in a
flash flood, in the desert.

“You’ve got a point.” Sammy slammed the hood down and trotted over to the passenger side.

His thin T-shirt was already soaked
through, the material clinging to his shoulders and his chiseled chest.
His nipples were hard peaks from the cold water, and Ed knew he
shouldn’t be staring at them, but he couldn’t help himself. Especially
when his mouth watered to taste the rain on that hard flesh.

“So…do you know what’s wrong?” Ed asked, once Sammy settled in the car.

His clothes dripped on the leather seat,
but Ed wasn’t worried about him harming the old station wagon. He had
picked it up for a few hundred dollars, and there were several good
reasons Mr. Henderson was so willing to part with it for hardly
anything. Ed found himself almost painfully distracted by the way the
stray drops of rain still rolled down the curve of Sammy’s ear.

“I have a pretty good idea.”

“Is that a bad thing?” As soon as he asked
the question, Ed knew the answer. Old Man Henderson had fucked him
over. The old bastard had probably thought it was a hilarious joke.
Send the stupid kid off with the piece of shit car nobody else would
pay to buy. He had probably figured it wouldn’t make much of a
difference anyway, since Ed’s number had been so high in the lottery.
Ed wouldn’t need the old station wagon in Vietnam.

Sammy snorted. “Pretty bad. And not the sort of thing people usually have a spare for in the trunk.”

Ed dragged his gaze from Sammy and looked out to the sheets of rain. “What are we going to do?”

“There’s a garage back a few miles back.”

Ed frowned. “You mean Wendover? That’s more than a few miles. And we can’t walk that in this rain.”

“Maybe, but I haven’t seen anybody on this
road for the past hour.” Ed hit his head against the steering wheel.
“This was a really bad idea. I’m sorry I got you sucked into this.”

Sammy chuckled good-naturedly. “No, man,
it’s cool. I wanted to get the hell out of Evanston, didn’t I? You’re
doing me a favor.”

Ed glanced up from the corner of his eye,
feeling miserable. “This is a favor? Really? Getting you stranded in
the middle of the godforsaken desert is a favor?”

“It’s better than being stranded in the godforsaken wasteland that is Evanston.”

Ed couldn’t help but smile at that. A
small, tired smile. The decision to run away to California hadn’t
actually been a spur-of-the-moment, spontaneous thing. Ed had spent
most of the past year scrimping and saving his pennies, putting away
everything he could, working every odd job he could find in a
twenty-mile radius. His body had hardened over the previous year, his
skin turning rough, his face taking on a permanent reddish hue. He had
been almost as pleased with that as he had been with the money he kept
hidden in a jar behind the barn. But the decision to invite Sammy Neff
had been completely spontaneous and more than a little desperate.

“I didn’t know you hated it there so much.”

“You didn’t?” Sammy brushed his hair away
from his face, sending a tiny shower of water over Ed’s shoulder. “I
thought that’s why you asked me to come with you.”

“No. I asked because I heard you were a good mechanic, and I was hoping to get some free labor out of you.”

“If you had told me that, I would have
grabbed a few parts from the garage before we took off. Hey, you mind
if I turn on the radio?”

“No.” Though Ed didn’t think that Sammy would be able to find any signal. “I have a few 8-tracks, too.”

The clouds around them were almost purple
in their fury. They stretched down to the ground in long fingers, as
though the weight of the water was so great, it could pull the very sky
down. A bolt of lightning struck so close, and so hard, that for a
moment, the entire world was nothing but white light. Ed reared back,
away from the window, blinking rapidly to clear his vision.

“You’ve got a death grip on the wheel.”

“Oh.” Ed took a deep breath and forced
himself to loosen his hold. His knuckles were already turning white,
and his armpits were damp. It was either nerves, or the humidity in the
air. A humidity that only got worse with each second. “I didn’t think
it was supposed to rain like this in the desert.”

“I think my old man told me once that there was always the danger of flash floods in the desert.”

“That would have been good information to have.”

Sammy smiled. “Yeah, it would have been. Sorry about that.”

As far as Ed was concerned, there was
nothing as delightful as Sammy’s smile. It was so easy. Sammy had
always been a good-natured boy, bestowing smiles on the world
regardless of what was happening around him. When they were eight,
Sammy had crashed face-first into a wall during a pick-up game of
football. His face had been covered in blood, his eyes already starting
to swell, and every kid on the playground stopped to stare in horrified
fascination. Two teachers rushed over, as flustered as wet hens,
prepared to drive him the forty-two miles to the nearest big hospital.
And in all the chaos and confusion, Sammy had smiled at them. Missing
teeth and all. Ed had been quite close to the point of the accident—he
had been sitting against the wall reading when Sammy slammed into the
bricks—and he never forgot that moment.

Now, thinking about it again, he wondered
if maybe Sammy had seen him there and threw his body at an awkward
angle in a bid to avoid trampling the smaller boy? Ed was consumed with
curiosity, but he couldn’t think of a graceful way to introduce the
topic. Or even explain why he was still thinking about it.

“What do you think you’ll do in California?” Sammy asked.

“That’s your big plan? You’re dragging us all the way out to California to see the beach?”

“I’ve never seen it before. Have you?”

Sammy paused a beat. “No. Not too many of those in Wyoming.”

“But you’ve got to have a plan after that. A guy like you.”

Ed dropped his head back and stared up at
the ceiling. It was covered in unknown stains. He was pretty sure that
a Coke can left out in his car was the source of most of the stains. He
wanted to believe that it was a simple accident, and not his brother
trying to destroy the one thing Ed owned in the world. He wanted to
believe that, but he didn’t.

“I never said that.”

“I think it’s what you were implying.”

“Maybe, but I always liked that about you.”

“Really? Until two days ago, I didn’t even think you knew I existed.”

“I knew.” Sammy pulled at his shirt,
separating the wet material from his skin. “We did have just about
every class together in high school, after all.”

“Yeah, but we never saw each other outside of class.”

Ed tilted his head. “When?”

“When you came up and worked for my dad
last summer. That’s when I noticed you weren’t exactly the nerd I
thought you were. You did a pretty good job of lifting those bales of
hay.”

Something sizzled down Ed’s spine—it
might have been pleasure. A secret, low sort of pleasure. Sammy had
noticed him working in the barn? Had Sammy stared at him? No, probably
not. That seemed like just a little too much to hope for. On the other
hand, Ed had spent so much time watching Sammy, he was surprised he
hadn’t noticed the other boy looking at him.