Read A Captive of Chance Online 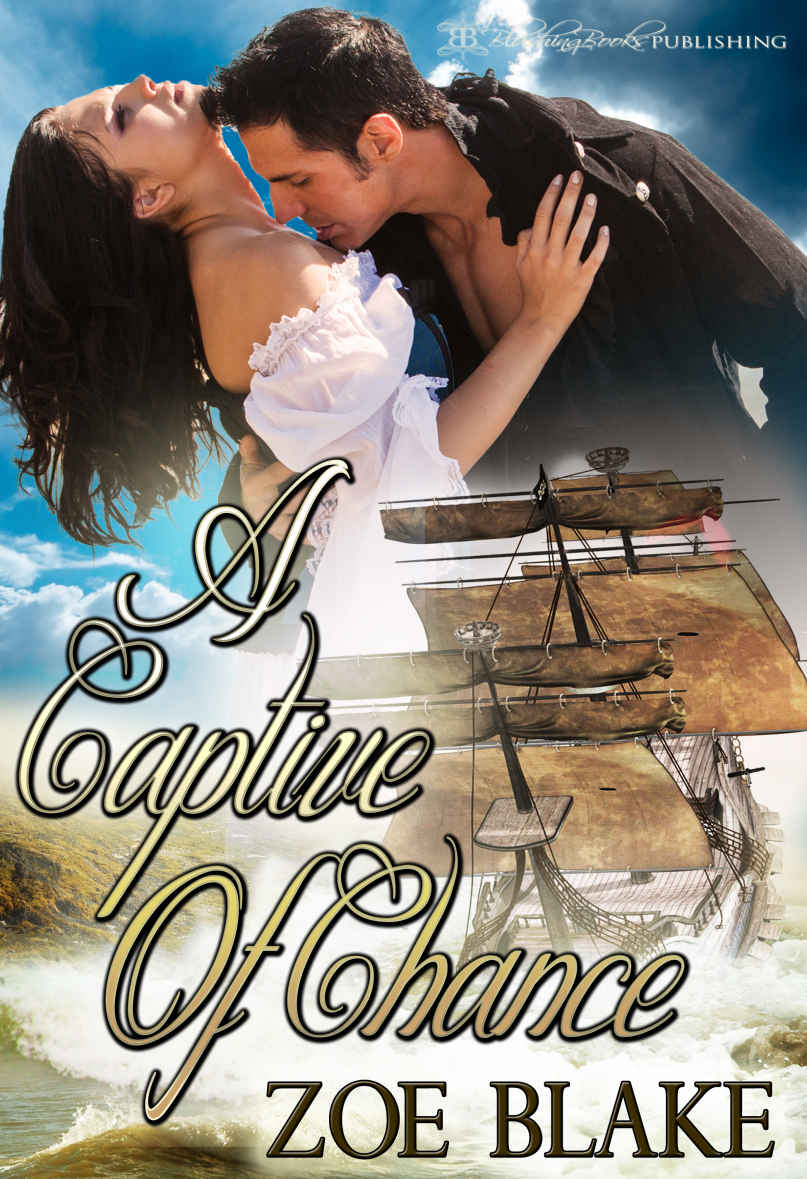 This book is intended for
adults only
. Spanking and other sexual activities represented in this book are fantasies only, intended for adults. Nothing in this book should be interpreted as Blushing Books' or the Author's advocating any non-consensual spanking activity or the spanking of minors.

We have our own store, but we know many of you prefer to buy from Amazon, and now we’re making it much easier for you.   We’ve started a new newsletter, aimed at just our Amazon customers.

We’ll be sending out one newsletter per week, letting you know about our most recent releases.  In addition, everyone on this newsletter is guaranteed TWO free stories per month, and to sweeten the deal, we’ll be giving one person on the list

every week
.   Nothing to buy... just stay on our list and you’re eligible for the drawing.

OR use this
link
.

WOULD YOU LIKE FREE STORIES ON YOUR KINDLE EVERY MONTH?

That's right.  FREE.   And we're not talking about some short “throw-away.”   Every month, Blushing Books gives our customers two novel or novella-length stories (typically at least 15,000 words) completely free.   You can always download our current month's stories at our website, located at
http://www.blushingbooks.com
.

But we're offering an additional service for Kindle customers - we'll send the monthly free stories directly to your Kindle device.  They will also come automatically if you’re using a Kindle app on your smart phone or tablet.  You don't need to do anything, pay anything or remember anything.  Every month, free stuff will just magically appear.

1.  Email us at
[email protected]
, and put FREE KINDLE STORY in the subject line of your email.  The email address you mail FROM will not be kept or mailed in any way unless you also sign up for our newsletter with that address.

2.  In the body of your email, you will need to provide your KINDLE's email address.  Your Kindle email will end with @kindle.com.   If you do not know your Kindle email, you need to log on to your Amazon account and find it under "manage my Kindle."

3. You’ll also need to add
[email protected]
to your permitted email list on Amazon (otherwise your Kindle will not accept email from us.)   If you don’t do this step, you will not get the story.  This is also found under the "manage my Kindle" section of your Amazon account.

Once we get an email from you, you'll be added to our free monthly story list.  You'll receive two free stories per month.    And remember, if you prefer, you can always get the free material at
www.blushingbooks.com
.

Chapter One: His Captive

Chapter Four: Two on One

Chapter Five: His to Claim

Chapter Seven: Batten Down the Hatches

Chapter Twelve: A Change of Fate

The alarm bell startled the two women out of a deep, if not restful, sleep. Sitting up in their cots, they looked about the small cramped cabin in confusion.

“I haven’t the faintest idea, but there is only one way to find out.”

Isabelle grabbed her dressing gown from the end of the cot and swung it over her shoulders as she approached the cabin door. She felt a tug on her nightgown and looked to see her companion, Marina, holding tight.

“Don’t do it, miss. Let’s just stay here till the captain comes.”

Pulling the fabric free, Isabelle continued to the door. “Posh! If there is something truly going on, we cannot wait for that old blowhard to come and let us know!”

Isabelle, well to be correct, Esmerelda Leonor Isabelle Catalina de Recalde el Rojo, did not cower easily. Perhaps it was her father’s Spanish blood or even her mother’s English courage. One thing was certain, she did not possess the gentile temperament of the typical female or the patience, for that matter.

Releasing the latch, she threw open the door to a chaotic scene.

Seaman were scrambling about in various states of undress while the cabin boy, who had been bringing them their meals during the long voyage, vigorously rang the sleep depriving bell.

“All hands! All hands on deck! Captain’s orders!” he shouted over and over again.

“You there. Boy! Boy!” shouted Isabelle. “Yes, you!” she clarified when he gave her a confused look as if surprised to see a partially dressed woman addressing him. “What is going on?”

“Pirates! There are pirates! We’re about to be attacked! Best get back inside and bar the door,” said the boy impatiently as he went back to his duty.

Isabelle quickly shut the door, threw the latch and turned and braced her back against it for good measure.

“Oh lord! Oh lord! Oh lord!” wailed Marina. She had signed on as companion to the fancy lady for a bit of adventure and fun. True she was hoping to catch the eye of some strapping young seaman because what was adventure without a lusty man by your side, but she did not sign up for pirates!

“Stop that nonsense, Marina! I need to think,” groused Isabelle. Then feeling poorly for shouting at her frightened companion, she crossed the cabin and gave her a quick hug.

“We cannot panic. The captain may be a slovenly man, but he runs a good merchant ship. I’m sure they are prepared and have fought off, well, hundreds of pirate attacks with great success.” Isabelle said with a false sense of confidence.

“Do you really think so, miss?” asked Marina, her eyes filled with hope and fear.

No.
“Why of course, I think so!” she said with authority. “Now help me out of my nightgown and into my corset and dress. If we are to be attacked, I don’t want them finding me in my skivy!”

Marina went to do as she was bid while Isabelle was left to ponder for a moment the real possibility of being taken captive by pirates. Her father was a wealthy Spanish noble. Ransom would not be an issue. She could provide the pirates with plenty of gold and jewels, but was that all they would ask of her? She shuddered at the thought.

How bitterly ironic, Isabelle thought. When she set out on this journey, her every thought was how very much she did not want to reach her destination. Fate was cruel. Isabelle had been forced by her parents to leave her beloved warm and sunny Azores islands to travel to cold and dank England to become the betrothed of some stodgy, old English lord. Even the painted miniature he had sent with his marriage proposal showed a thin hairline and at least two chins. One had to assume the painter was being judiciously kind, and in actuality her betrothed had even
less
hair and probably one or two additional chins!

She had begged, pleaded, stormed and stomped but to no avail. Her parents were stalwart. She would marry the English lord and secure an English title for the family. Her parents also felt Isabelle’s upbringing on the somewhat remote colony island was leading to “unladylike” behavior as her mother put it. They were sending her back to the continent not a moment too soon in their minds.

So it was Isabelle, who found herself alone with only a hired companion for company on a merchant vessel bound for England. In the hold were trunks of silks, jewels and gold. Her dowry. Her father had chosen the well-armed vessel to carry his precious cargo. The galleon had at least fifteen guns. But would it be a match for a pirate ship?

“Not that one, Marina,” said Isabelle when a satin walking dress was pulled out of their trunks. “The heavy worsted wool one.”

“The worsted wool one!” shouted Isabelle.

The noise and clamor all around them was getting louder. Above their heads they could hear the pounding of boots and the screeching scrape of wood on metal as the thirty-six pound long guns were rolled towards the gun ports. Indistinct shouts and curses filtered through the wooden beamed ceiling of their cabin. Even without hearing the words, both women could tell from the excited tenor of the shouts, the seamen were scared.

When both women were dressed in their warmest gowns, they sat on the cot and waited and listened. All the harried activity had suddenly stopped. There was a strange, tense calm.

The women screamed and held their hands over their ears as the whole ship shook and rattled as each long gun was fired. Dust and debris were shaken loose from the ceiling and fell down on them like rain. Marina clutched desperately at the lapels of Isabelle’s dress. Isabelle held the frightened woman tightly to her side. Rubbing a soothing hand down her back, she said, “The sound of the guns is a good thing. I’ll bet they are sending those nasty pirates scattering away.”

Marina raised her head off Isabelle’s shoulder and gave her a look filled with doubt. Isabelle’s attempt to soothe and calm had fallen short. Unfortunately, even she didn’t believe her words anymore.

Her inherent lack of patience came to the fore. Isabelle jumped up and grabbed Marina’s hand. “Come. We cannot stay here like two geese for the slaughter!”

“But where are we to go? It must be safer in the cabin!” complained Marina.

“If they take the ship, they will search the cabins and the hold for treasure. We must find a place to hide where they will not think to look. Hopefully, none of the seamen will betray there are women on board. Now come on!” shouted Isabelle as she forcibly dragged a trembling Marina out the cabin door.

The passageway was strangely quiet compared to the chaos moments before. All the men were above deck fighting off the attack. Isabelle continued to drag Marina down the passageway where they came to a steep wooden ladder leading down to the hold. “This way. Mind your skirts,” ordered Isabelle as she awkwardly descended the ladder. Reaching the wooden floor beneath, she helped Marina on the last few rungs. Taking a look around the dimly lit interior, Isabelle saw the entire space stacked with crates, provisions for the voyage, and trunks. Somewhere in this mess was her dowry trunk, she thought queerly.

“This should be a good hiding place,” offered Marina as she took in all the dark nooks and crannies.