Read A Chamber of Delights Online

A Chamber of Delights 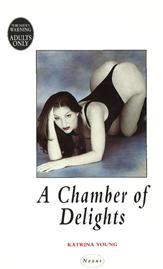 Todd bit Sophie’s neck and skimmed her buttocks with his fingers. Sophie began to quiver and set her legs apart to give him unrestricted access. Now he raked her body with his fingers, drawing them down her flanks, from the hollows of her armpits to her thighs.

‘Beg,’ he whispered. ‘Beg and I’ll give you this.’ He stroked his shaft, making it swell. ‘You know how much you want it.’

4 Giving His Mistress a Hand

9 A Change of Gear

18 Standing Up for Her

20 In the Maiden at Last

21 A Judge of Sensuality

A CHALICE OF DELIGHTS

A Chamber of Delights
Katrina Young

AS A CONSORT
to an English earl, Gael led a life of luxury and ease. Her duties, apart from pandering to the Earl of Grymwell’s lascivious demands, were to host weekends of debauchery and lust at Grymwell Hall. But the earl tired of playing with her and sent her upon a mission to deliver a valuable antique – the chalice of delights – to a millionaire collector in the south of France.

The story begins with Gael wondering what she will do with her life away from the luxury and sophistication of Grymwell Hall.

STANDING ON THE
balcony with her legs set wide apart, Gael delighted at the caress of a balmy breeze upon her breasts. Then she closed her eyes and sighed as she felt a different kind of heat upon her back.

As a long, black hand eased between her legs, she murmured with the pleasure that it brought her. A thumb slipped up inside her, widened her and searched her. It pressed against her G-spot. It sent a wave of pleasure through her belly to her breasts, and then withdrew.

The hum of Paris came up on the sultry air. Streamers of bright car lights stretched along the avenues and wound around the floodlit Arc de Triomphe.

As the hand explored the inside of Gael’s thigh, she sighed again. ‘My God, Melindi, you’re a devil with your fingers. Please don’t tease. I want to feel your tongue.’

Melindi thrust out her breasts against Gael’s back. Full and firm, the nipples pressed against naked skin. She held her head up regally and smiled.

‘And you, my little pink morsel, are very naughty, standing here stark naked for all the world to see. I’m going to have to spank you hard. Bend down.’

On the benches in the park below, lovers kissed and petted, too intent upon their touching to glance up.
They didn’t see the black-haired young Englishwoman silhouetted against the glow of the plush apartment’s lamps. They didn’t see her grip the balustrade and thrust herself out needfully to the Nubian princess. And neither did they hear her gasp with pleasure as the elegant hand struck her bottom, making her body jolt, bringing her secret lips tingling into life.

Gael’s nipples burgeoned swiftly. Her prominent labia swelled as she thrust them out for more. The long hand struck her smartly, building up a rhythm. Then, deep inside her body, she began to sense that fluid warmth which a spanking always brought.

Melindi knelt. She licked Gael’s thigh. She snaked her hand between Gael’s legs once more. She plunged her thumb into Gael’s cleft and massaged at her nub.

Gael whispered, ‘My God, Melindi, I love it but I need it harder. Please.’

The black girl’s frotting action became more urgent still. Beads of perspiration welled up on Gael’s forehead and ran down to her cheeks as she widened her stance to stretch herself as tautly as she could.

Melindi sank her teeth into Gael’s buttock and raked her thigh with scarlet nails.

Gael yelped. Then she pushed back on to the intruding thumb, desperate for fulfilment, delighting in the sheer abandonment of the act.

It had been a strange few weeks.

Melindi had been her saviour when she had arrived in Paris with only a few francs in the pocket of her kneed-out jeans. After they had last made love in England, Gael had never imagined that she would see the Parisian model again. Now here she was, free of men and free of domination. She had exchanged all that for the gentle caresses and intelligent tongue of a woman – a svelte-skinned, nubile creature whom she loved to lick and suck.

The fingers stroked her nubbin, sensitised and needing to be sucked. When the walls of her vagina began to quiver with pre-orgasmic tension, Gael bit her lip and drew a long, deep breath. Why wouldn’t a man do this to her? Men had always wanted to spread her out and take her hard – to fill her and to sate themselves inside her. In the future she might need just that, but now it was the furthest thing from her mind.

Then her climax came. She loosed a deep moan which echoed off the stone façade and over leaded rooftops. She rotated herself upon the phallic thumb, seeking even greater satisfaction.

As Gael stretched herself and turned, her lips met Melindi’s succulent, red bows as the model stood. Their nipples touched and kissed as well when Melindi held her close.

‘You’re a temptress, but I love you, Melindi Mocambo,’ Gael whispered as she kissed the slender neck and ran her palm down the sleek back. ‘What am I going to do without you?’

Melindi pulled away and brushed Gael’s brow. ‘Don’t worry, Pinky, my sweet. I’ll see you when I come to England. With my house near London as your base, you’ll have your new career to occupy your time.’

Gael smiled thinly. ‘Do you think I’ll be a good facilitator?’

Melindi set her head back and laughed. ‘What a lovely word for it. Yes – I think you’ll be marvellous at it, darling. What better way to spend your time than making people’s wildest dreams come true. And think of all the “presents” you’ll attract.’

That was all Gael had thought of for weeks. ‘But I’ll need capital, Mel.’

Melindi shrugged. ‘So – hock those expensive baubles I smuggled out of Grymwell Hall for you before the earl chucked you out.’

Gael had resigned herself to using her jewellery as security for loans. The diamonds and rubies and gold were all she had in the world. She shivered. She’d thought herself secure at Grymwell Hall. Accustomed to the soft life as the consort to an earl, she had now to make her own way in the world.

Melindi lifted her chin and kissed her lips. ‘Bunny Grymwell was a bastard, darling. You’re well rid of him.’

‘You loved the way he tied you up and spanked you before he teased you with that enormous cock of his. It never seemed to tire.’

‘How do you know about that?’

Melindi grinned. ‘You weren’t the only recipient of its ministrations, sweetie. He kept it up for hours. I must have come a hundred times, at least.’

Gael pushed her shoulder playfully. ‘He never made me come like that. He always kept me on the edge.’

‘But you were his slave.’ Melindi pushed her tongue into Gael’s mouth, toyed with Gael’s tongue then withdrew.

Gael threw her head back. ‘I could have left him if I’d wanted to.’

‘Bunny only let me have them so he could watch them strip me bare and have me in a dozen different ways.’

‘But you loved every second of it, darling. You loved the way they chased you and ripped your knickers off before they pinned you to the bed. You told me so yourself.’ Melindi sent her tongue into Gael’s ear, whispering, ‘And what about the women?’

Gael snuggled up to Melindi’s neck. ‘You were my first.’

‘And am I still your only girlfriend?’

‘Of course you are.’

‘Then come into my boudoir, you wicked creature. I want to feel your tongue between my legs.’

Melindi took Gael’s hands and drew her to the bedroom. ‘And don’t worry. You’ll be a huge success. You were a marvellous hostess at the Hall. At least Bunny Grymwell trained you well for that.’ As Melindi sat on the edge of the bed, she pulled Gael to herself, setting her lips to Gael’s nipple and closing her eyes as she sucked.

Gael also closed her eyes as the nipple came alive and sent little tingles down to her clitoris. ‘I shall only take money for organising parties, Mel. What people do there will be entirely their own affair.’

‘But I take it you will participate freely if they insist, my little marshmallow.’ Melindi lapped at Gael’s soft, pink breast. ‘I can’t imagine those devils being unable to keep their great horns out of here.’ She ran the flat of her hand between Gael’s legs. ‘You won’t deny yourself the opportunity to have that kind of fun, will you?’

Melindi lay on her back. She pulled her legs right up. As Gael knelt and put her head between them, the vista made her tremble. Melindi was the most sensuous of
women, her full breasts tight, her figure sleek. Between her strong, taut legs nestled a purse of flesh so large and so succulent that Gael wondered how it felt as the woman strode the catwalks. She was successful because she was so sexy. She was sexy because she could feel herself all the time. Whatever the situation, Melindi was always ready – always randy.

‘And don’t forget,’ Melindi continued as she placed a pillow under her hips to raise herself for Gael, ‘you’re very well connected. Think of the rich and famous people you know. And with my list of clients from the fashion houses, you’ve got it made, girl. The idle rich are always lusting to fill their lives with excitement in some way.’ Now she widened her legs, opening her vulva, the sinews of her loins taut, their hollows stretched.

Gael ran her tongue through the hollows and looked up. ‘Don’t you think Bunny Grymwell will be mad at me if I poach his cronies?’ She ran her finger over the tight little black curls of Melindi’s pubis, and down the fringes of the open vulva. She worked the clitoral nub in circles until it rose from its protective hood.

Melindi wriggled and sighed. ‘Sod Grymwell, darling. Anyway, you should have left him sooner.’

‘I know,’ Gael said dreamily as she toyed at Melindi’s clitoris with the warm tip of her tongue. ‘But he excited me.’

‘He excited you beyond all reason, sometimes.’

‘I suppose he did.’ Gael eased her tongue through the leaves of distended flesh between Melindi’s legs. ‘I hated him at times.’

Seductress by Betsy Prioleau
The Big Ask by Shane Maloney
The Lights by Starks, M.
Donor by Ken McClure
Cinderella Six Feet Under by Maia Chance
Codes of Betrayal by Uhnak, Dorothy
GirlNextDoor by Lyra Marlowe
A Covert War by Parker, Michael
Collected by Shawntelle Madison
Nella Larsen by Passing