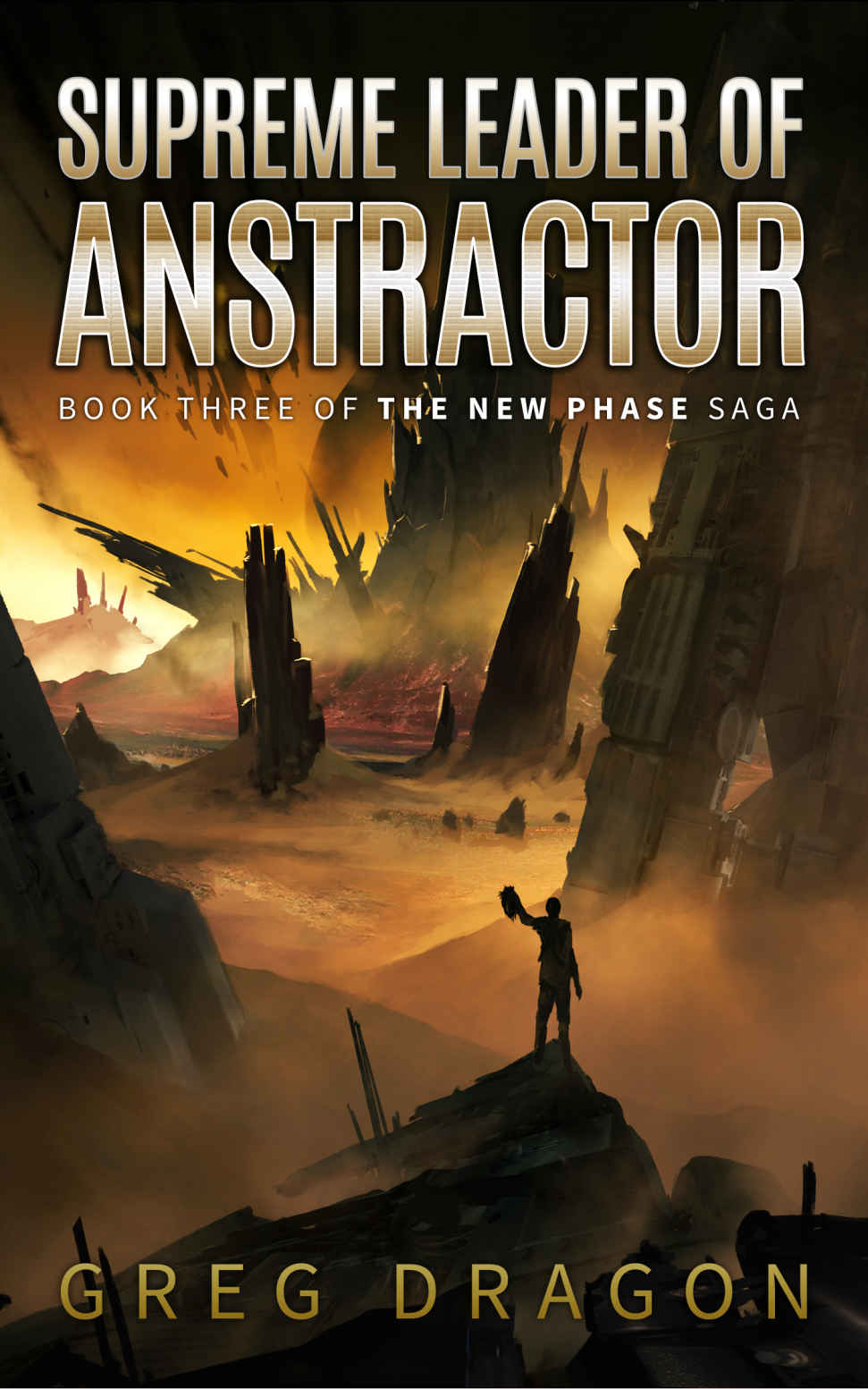 No part of this book may be reproduced, or stored in retrieval systems, or transmitted by any means, electronic, mechanical, photocopying, recorded or otherwise, without written permission of the publisher.

For more books by the author

For more information on Anstractor – the world

T
HE SLEEK, cylindrical ship drifted silently over the trees of Geral as it deployed what looked like a mass of black orbs. These orbs were soldiers, balled up when shot from the hatch, but once out they spread their wings and drifted down to the planet like a shower of thick soot.

There were over a thousand of these drop ships, and the Louines that flew them were some of the best pilots in the galaxy. On the other side of the planet a number of Meluvian zip-ships flew into the atmosphere and engaged the Geralos’ defense. More drop ships flew past them to deploy Meluvia’s finest warriors. Almost every planet sent soldiers to invade Geral this day, and the Vestalian Army was with them.

The Louines—Anstractor’s leaders in technology—wore uniforms that looked and functioned like 3B suits. Their masks hid their faces, black, smooth shells that seemed aerodynamic in their design. To the citizens of Geral they looked like shadows as they ran into the cities shooting at anyone that was armed or aggressive.

The Geralos lizards saw all manner of soldiers coming at them, from the well-trained Louine elite to the colorful but deadly Casanian fencers. Before this night they had only dealt with humans and Meluvians, but now they saw Casanians, Genesians, Traxians and, surprisingly, the Louines!

On Meluvia, the Crak-Ti had been stopped, but the few remaining fought back against the marines like demons. Rafian and the Phasers pressed on them from all angles with devastating results, but the Geralos would not give up, and quite a few recruits went down from the hot edge of their las-swords.

It was on the third day of fighting when Commander Tayden Lark received a message from Dott Toga that the skies above Zallus—their Vestalian city—showed signs of an invasion. Tayden was hunkered down behind a fallen structure when she read it and upon realizing that they would lose everything, sprinted over to Rafian VCA to tell him.

“We have to go Commander!” she screamed. “Zallus is in trouble. Dott says that this is the real thing. The lizards have found our base!”

Rafian looked at his hands and at the hilt of his las-sword as he sorted through who should go and who would remain to continue fighting the Crak-Ti.

“You and the Phaser agents stay with the marines to finish this off,” he said to her, but then he saw disappointment reflected in her eyes. He shook his head, then looked over at the situation between his Phasers and the Crak-Ti. The Alliance marines were firing into them but the Geralos had erected force fields to render their shots worthless.

“We need to flank them,” he said. He turned to Tayden and touched her shoulder. “Go, Tay, go and defend our home. Take Yuth, Marian, and the Phaser agents and I will lead the recruits to victory here.”

“I am sorry for being so indecisive, Rafian, but what you propose sounds like suicide. It’s just you and—”

“That’s the plan, Tayden. Drop a crystal and get back there immediately.”

“Yes, Commander, I will see it done,” she said. “Listen, Raf, don’t be a hero, okay? You’ve done enough for us as it is and we cannot afford to lose our Supreme Leader.”

“I appreciate that Tay, but we need to move—”

He was interrupted by his wife, Marian, who had marched over to stand in front of him. “I stay with you, Rafian,” she announced. He considered arguing against it but instead motioned for her to return to the line. She complied silently and he turned towards Tayden and saluted. She returned the gesture but stepped in to him, taking his head between her hands.

“This
thyping
act is getting on my nerves, Rafian. You could die today and I would never be able to live with myself if you did. Just say you forgive me and let’s move on from this
schtill
. Okay?”

“I forgive you, Tay; you know that I love you. Now quit your stalling and go give those lizards hell.”

She stepped back and called the names of Phasers that she wanted at her side. When they joined her she dropped a crystal and stepped through the portal to return to Zallus.

“Marian!” Rafian shouted and she ran over to join him. “They have eyes on me. They know that I lead this company but they don’t know you and what you are able to do.” He made a gesture with his hands, indicating that he wanted her to flank them. She nodded with understanding and he placed an orb inside of her palm before breaking away to join the marines.

A few Geralos broke through the force field and one threw his sword into the throat of a marine. As the soldier went down the lizard jumped over another and landed, crushing the face of a Phaser recruit. He continued his onslaught and waded into their midst, throwing elbow strikes and kicks with deadly precision.

He was too much for them and the firing slowed, which opened up a lane for more Crak-Ti to rush in. The Phasers answered in kind by clashing sword against sword. The little push had become a full-on surge and Rafian ran over to assist them.

When the marines saw Rafian their resolve improved and he spun, whipping his las-sword free and cutting the first Geralos in the abdomen and then his neck. He cut the big lizard a few more times, then kicked the corpse into the rest of his fellows and screamed at the marines to resume their firing.

While this was going on Marian had come out of her invisibility cloak, sprinting. She raced down the empty street and onto an adjoining road that took her to the rear of where the Crak-Ti were pushing. She slipped into an alley and made to cloak again but was suddenly dropped by a blow to the face.

Marian’s nose felt broken and she slammed her eyes shut against the pain. She rolled on the ground, temporarily blind and holding her face. The Crak-Ti that hit her came out of the shadows and walked over to where she lay.

Marian sprung up swinging while powering on her las-sword but her slash went wide and the Geralos stopped in his tracks. “
Thype
this,” she whispered. She turned off the sword, then pulled out a pair of black knives. Using her sleeve to wipe the blood from her face, she stared down the Geralos with hate in her eyes. “I don’t need your filthy tech,
cruta
, you don’t scare me.”

The Geralos rushed in while swinging his own sword but Marian’s acrobatic skills were second to none. She dodged his attacks before rolling under a swipe that was meant to take her head off. Her roll took her past him and she popped up on his flank. He spun with his las-sword, hoping to catch her, but she was already on top of him.

Black blood gushed from his neck, revealing the poison from the knives as she delivered the death blow and somersaulted off. She picked up her run while scanning the alleyways to make sure there were no more surprises, then touched her face to assess the damage.

As she came up on a large mass of Crak-Ti, Marian took out the orb Rafian had given her. A myriad of blue lights began to dance along its surface and she threw it into their midst before ducking behind the nearest building.

The bomb was so devastating that it left a large crater where it struck, and over forty Crak-Ti were either killed, or burned and maimed in its aftermath. The force field generator took damage from the blast; it began to malfunction and allowed the marines to rush in on the Geralos.

“Rhee, to me!” Rafian yelled at Marian. He ran towards her and took her hand, then turned towards the center of the city. The Phasers followed close behind, and so were the remaining marines. There were so many Crak-Ti convening on their position that the fight looked hopeless for the first time.

“What happened to your face, babe?” Rafian asked as they hurried to safety. He brushed her hair back to get a better look at it.

“No, just swollen and bruised. I assume the
schtill
that did this is no longer with us, right?”

He nodded in response and then stopped their run when they reached the large park in the center of the city. “Hold here, warriors, and take a breather,” he commanded. He then tapped his comm into the city’s PSA system and proceeded to instruct the survivors to make their way towards the central park. “WE WILL PROTECT YOU WITH OUR LIVES!” he promised, and after some time they began to see civilians pouring in from all over.

The Phasers and marines formed a large circle with the civilians in the center where the Crak-Ti couldn’t get to them. As they rushed in at the Alliance, Rafian’s army pushed back, and this went on for a time, with the Geralos suffering most of the losses. It was not an easy task for the Crak-Ti to overcome them, and before long the marines had powered on their own force field generator.

“Listen up everybody!” Rafian shouted. “Reinforcements are coming. Just stay with me and hold these
crutas
off. I know that you are tired, worn out, and in pain. Some of you are thinking that you will die, here, on this alien planet. I am with you, marines, you need not be afraid. If we can hold them off for a few more hours I promise you that we will win the day. They’ve already lost but they don’t know it. As of 0500 Vestalian time, one million troops from the Alliance corps landed on the lizard planet.”

Upon hearing this, the soldiers whooped and hollered, and it breathed new life into the weary. Rafian looked at his wife standing next to him, and he was proud of her for being who she was.

Marian caught him staring and covered her bruise self-consciously. “Will you stop
thyping
looking at it, please?” she cursed.

“Then what are you looking at?”

“I’m looking at the woman I chose to spend an eternity with. I am thinking that if Tayden fails and the cloner gets fried, we will die, permanently, but I can die a happy man.”

“Thanks babe, I needed to hear that. Now, let’s meet them and show the galaxy that when we say we finish the mission, we
thyping
mean it, man.”