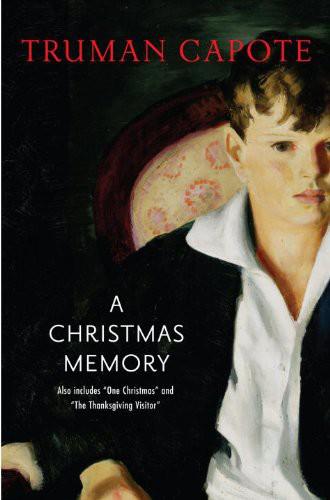 All rights reserved under International and Pan-American
Copyright Conventions. Published in the United States by Random House, Inc., New York, and simultaneously in Canada by Random House of Canada Limited, Toronto.

I
magine a morning in late November. A coming of winter morning more than twenty years ago. Consider the kitchen of a spreading old house in a country town. A great black stove is its main feature; but there is also a big round table and a fireplace with two rocking chairs placed in front of it. Just today the fireplace commenced its seasonal roar.

A woman with shorn white hair is standing at the kitchen window. She is wearing tennis shoes and a shapeless gray sweater over a summery calico dress. She is small and sprightly, like a bantam hen; but, due to a long youthful illness, her shoulders are pitifully hunched. Her face is remarkable—not unlike Lincoln’s, craggy like that, and tinted by sun and wind; but it is delicate too, finely boned, and her eyes are sherry-colored and timid. “Oh my,” she exclaims, her breath smoking the windowpane, “it’s fruitcake weather!”

The person to whom she is speaking is myself. I am seven; she is sixty-something. We are cousins, very distant ones, and we have lived together—well, as long as I can remember. Other people inhabit the house, relatives; and though they have power over us, and frequently make us cry, we are not, on the whole, too much aware of them. We are each other’s best friend. She calls me Buddy, in memory of a boy who was formerly her best friend. The other Buddy died in the 1880’s, when she was still a child. She is still a child.

“I knew it before I got out of bed,” she says, turning away from the window with a purposeful excitement in her eyes. “The courthouse bell sounded so cold and clear. And there were no birds singing; they’ve gone to warmer country, yes indeed. Oh, Buddy, stop stuffing biscuit and fetch our buggy. Help me find my hat. We’ve thirty cakes to bake.”

Its always the same: a morning arrives in November, and my friend, as though officially inaugurating the Christmas time of year that exhilarates her imagination and fuels the blaze of her heart, announces: “It’s fruitcake weather! Fetch our buggy. Help me find my hat.”

The hat is found, a straw cartwheel corsaged with velvet roses out-of-doors has faded: it once belonged to a more fashionable relative. Together, we guide our buggy, a dilapidated baby carriage, out to the garden and into a grove of pecan trees. The buggy is mine; that is, it was bought for me when I was born. It is made of wicker, rather unraveled, and the wheels wobble like a drunkard’s legs. But it is a faithful object; springtimes, we take it to the woods and fill it with flowers, herbs, wild fern for our porch pots; in the summer, we pile it with picnic paraphernalia and sugar-cane fishing poles and roll it down to the edge of a creek; it has its winter uses, too: as a truck for hauling firewood from the yard to the kitchen, as a warm bed for Queenie, our tough little orange and white rat terrier who has survived distemper and two rattlesnake bites. Queenie is trotting beside it now.

Three hours later we are back in the kitchen hulling a heaping buggyload of windfall pecans. Our backs hurt from gathering them: how hard they were to find (the main crop having been shaken off the trees and sold by the orchards owners, who are not us) among the concealing leaves, the frosted, deceiving grass. Caarackle! A cheery crunch, scraps of miniature thunder sound as the shells collapse and the golden mound of sweet oily ivory meat mounts in the milk-glass bowl. Queenie begs to taste, and now and again my friend sneaks her a mite, though insisting we deprive ourselves. “We mustn’t, Buddy. If we start, we won’t stop. And there’s scarcely enough as there is. For thirty cakes.” The kitchen is growing dark. Dusk turns the window into a mirror: our reflections mingle with the rising moon as we work by the fireside in the firelight. At last, when the moon is quite high, we toss the final hull into the fire and, with joined sighs, watch it catch flame. The buggy is empty, the bowl is brimful.

We eat our supper (cold biscuits, bacon, blackberry jam) and discuss tomorrow. Tomorrow the kind of work I like best begins: buying. Cherries and citron, ginger and vanilla and canned Hawaiian pineapple, rinds and raisins and walnuts and whiskey and oh, so much flour, butter, so many eggs, spices, flavorings: why, we’ll need a pony to pull the buggy home.

But before these purchases can be made, there is the question of money. Neither of us has any. Except for skinflint sums persons in the house occasionally provide (a dime is considered very big money); or what we earn ourselves from various activities: holding rummage sales, selling buckets of hand-picked blackberries, jars of homemade jam and apple jelly and peach preserves, rounding up flowers for funerals and weddings. Once we won seventy-ninth prize, five dollars, in a national football contest. Not that we know a fool thing about football. It’s just that we enter any contest we hear about: at the moment our hopes are centered on the fifty-thousand-dollar Grand Prize being offered to name a new brand of coffee (we suggested “
A.M.;
” and, after some hesitation, for my friend thought it perhaps sacrilegious, the slogan “
A.M.
! Amen!”). To tell the truth, our only
really
profitable enterprise was the Fun and Freak Museum we conducted in a back-yard woodshed two summers ago. The Fun was a stereopticon with slide views of Washington and New York lent us by a relative who had been to those places (she was furious when she discovered why we’d borrowed it); the Freak was a three-legged biddy chicken hatched by one of our own hens. Everybody hereabouts wanted to see that biddy: we charged grownups a nickel, kids two cents. And took in a good twenty dollars before the museum shut down due to the decease of the main attraction.

But one way and another we do each year accumulate Christmas savings, a Fruitcake Fund. These moneys we keep hidden in an ancient bead purse under a loose board under the floor under a chamber pot under my friend’s bed. The purse is seldom removed from this safe location except to make a deposit, or, as happens every Saturday, a withdrawal; for on Saturdays I am allowed ten cents to go to the picture show. My friend has never been to a picture show, nor does she intend to: “I’d rather hear you tell the story, Buddy. That way I can imagine it more. Besides, a person my age shouldn’t squander their eyes. When the Lord comes, let me see him clear.” In addition to never having seen a movie, she has never: eaten in a restaurant, traveled more than five miles from home, received or sent a telegram, read anything except funny papers and the Bible, worn cosmetics, cursed, wished someone harm, told a lie on purpose, let a hungry dog go hungry. Here are a few things she has done, does do: killed with a hoe the biggest rattlesnake ever seen in this county (sixteen rattles), dip snuff (secretly), tame hummingbirds (just try it) till they balance on her finger, tell ghost stories (we both believe in ghosts) so tingling they chill you in July, talk to herself, take walks in the rain, grow the prettiest japonicas in town, know the recipe for every sort of old-time Indian cure, including a magical wart-remover.

Now, with supper finished, we retire to the room in a faraway part of the house where my friend sleeps in a scrap-quilt-covered iron bed painted rose pink, her favorite color. Silently, wallowing in the pleasures of conspiracy, we take the bead purse from its secret place and spill its contents on the scrap quilt. Dollar bills, tightly rolled and green as May buds. Somber fifty-cent pieces, heavy enough to weight a dead man’s eyes. Lovely dimes, the liveliest coin, the one that really jingles. Nickels and quarters, worn smooth as creek pebbles. But mostly a hateful heap of bitter-odored pennies. Last summer others in the house contracted to pay us a penny for every twenty-five flies we killed. Oh, the carnage of August: the flies that flew to heaven! Yet it was not work in which we took pride. And, as we sit counting pennies, it is as though we were back tabulating dead flies. Neither of us had a head for figures; we count slowly, lose track, start again. According to her calculations, we have $12.73. According to mine, exactly $13. “I do hope you’re wrong, Buddy. We can’t mess around with thirteen. The cakes will fall. Or put somebody in the cemetery. Why, I wouldn’t dream of getting out of bed on the thirteenth.” This is true: she always spends thirteenths in bed. So, to be on the safe side, we subtract a penny and toss it out the window.

O
f the ingredients that go into our fruitcakes, whiskey is the most expensive, as well as the hardest to obtain: State laws forbid its sale. But everybody knows you can buy a bottle from Mr. Haha Jones. And the next day, having completed our more prosaic shopping, we set out for Mr. Haha’s business address, a “sinful” (to quote public opinion) fish-fry and dancing café down by the river. We’ve been there before, and on the same errand; but in previous years our dealings have been with Haha’s wife, an iodine-dark Indian woman with brassy peroxided hair and a dead-tired disposition. Actually, we’ve never laid eyes on her husband, though we’ve heard that he’s an Indian too. A giant with razor scars across his cheeks. They call him Haha because he’s so gloomy, a man who never laughs. As we approach his café (a large log cabin festooned inside and out with chains of garish-gay naked light bulbs and standing by the river’s muddy edge under the shade of river trees where moss drifts through the branches like gray mist) our steps slow down. Even Queenie stops prancing and sticks close by. People have been murdered in Haha’s café. Cut to pieces. Hit on the head. There’s a case coming up in court next month. Naturally these goings-on happen at night when the colored lights cast crazy patterns and the victrola wails. In the daytime Haha’s is shabby and deserted. I knock at the door, Queenie barks, my friend calls: “Mrs. Haha, ma’am? Anyone to home?”

True Love Lost (An FBI Romance Thriller (book 3)) by Kelley, Morgan
Seven Sorcerers by Caro King
Cool Water by Dianne Warren
Hooked by Catherine Greenman
3 Lies by Hanson, Helen
Better Than Friends by Lane Hayes
Summer of the Wolves by Polly Carlson-Voiles
The Crimson Rooms by Katharine McMahon
I Knew You Were Trouble: A Texas Kings Novel by Soraya Lane
The Sweetest Dark by Shana Abe