Read A Code of Love (The Code Breakers 1) Online

A Code of Love (The Code Breakers 1) 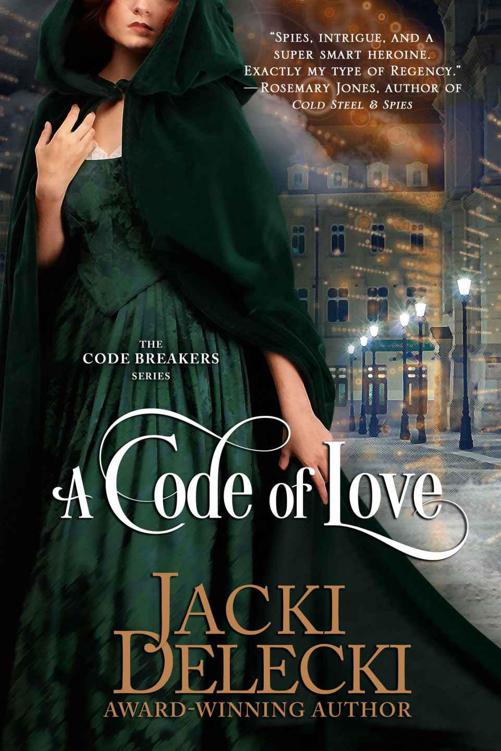 A Code of Love

A Code of Love

Excerpt from
An Inner Fire

Incidents are a product of the author’s imagination or are used fictitiously, and any resemblance to actual persons, living or dead, events, locales, is entirely coincidental.

All rights reserved. No part of this publication may be reproduced, stored in a retrieval system, or transmitted, in any form or by any means, electronic, mechanical, photocopying, recording, or otherwise, without the prior permission of the publisher.

Cover Art by The Killion Group

To the two people who never stopped believing in this book. My love and deep gratitude to my husband, and to my dear friend, Cynthia Garlough.

Lord Michael Ormond Harcourt crept along the darkened passageway. He had earned his reputation as a brilliant code breaker, but never before had he ventured into the realm of housebreaker. Henrietta was going to be furious not to be part of tonight’s exciting intrigue.

He strained to listen for the sounds of the house in the wee hours of the morning. He heard nothing but his heartbeat pounding in his ears. Reassured he was the only one about, he allowed himself to release the breath he had been holding since he sneaked into Gaston Le Chiffre’s house. He moved down the narrow corridor to his French colleague’s office.

He had only been in Paris a fortnight when he developed suspicions about Gaston—a series of sensations, hushed silences when he walked into a room, the papers on his desk seeming to have been moved, and the persistent feeling he was being followed.

The final impetus to search Gaston’s office came yesterday with the arrival of an anonymous note: “Something’s afoot.”

He gingerly opened the office door, inspecting the darkened corners before he entered. The dying fire cast shadows on the book-lined walls. A log shifted. The small crash startled him, causing his heart to thump against his chest.

He closed the door and moved to the center of the room, lit a taper, and placed it in the holder on the desk, then shuffled through the neat stacks of papers. He opened drawers, searching the contents.

He ran his hand across the smooth mahogany surface of the desk then passed his fingers along the rough underside. There he found a slightly recessed area in the far corner. His fingers returned to the uneven surface. Applying pressure, there was a sudden give, followed by a compartment popping open on the top of the desk.

The secret compartment contained a leather book. He scanned the room before he removed the worn volume. He had never seen a code quite like this one: French scrawl preceded by endless rows of numbers. This French puzzle was better than a wrapped Christmas present. He stuffed the incredible find into his waistband. He would crack the code in the safety of his room, then return the book to its hiding place, all before Gaston awoke.

He blew out the taper and left the office. He backtracked through Gaston’s garden. Carefully closing the garden gate, he entered the alley. The mixture of fog and smoke from the city’s coal fires blanketed the city. He could see no more than a few feet ahead. The cloying darkness muffled the distant voices, the clatter of carriage wheels, and horses’ hooves.

Approaching the street, he slowed his pace. Hanging lanterns illuminated the walkway where he emerged from the unlit alley.

He turned and walked toward his house. In the thick fog, the sound of his footsteps resonated, booming with each step.

The hairs on his neck prickled when he heard another set of footsteps shuffling behind him. With only a few yards to reach home, he ran, never pausing to look back.

With his right hand, he reached into his greatcoat for his pistol; with his left, he lunged for the doorknob.

The report of a pistol echoed down the street. An intense heat penetrated his awareness. He stumbled forward.

The door opened from the inside. The lights around Denby, his manservant, gave him an angelic halo.

Abandoning all manner of propriety, Lady Henrietta Harcourt broke into a dead run. With her muslin dress bunched in her hand, she ran toward Edward’s alarmed plea. Following the sound of her younger brother’s panicked voice and the insistent barking of Gus, she darted along the rocky path to the edge of the Serpentine.

Edward bobbed in the dark water of the lake with his dog circling and barking. Tremors of terror spread through her body, making it hard to breathe, hard to think. How could things have gone so terribly wrong in the few minutes those two had rushed ahead of her?

The hysterical youth flailed his arms in the air.

“Edward!” Her voice thundered over the still water.

“My leg…tangled,” he sputtered, coughed, swallowing water in his distress. His fear pierced straight through her. Blood rushed and thundered in her chest.

She tore off her bonnet and pelisse and plunged into the frigid spring water. She walked knee deep in the icy water toward her brother, trying hard to project calm as shock spread through her body. “Edward, I’m almost there.”

The dog whined but had stopped barking.

“Hold on to Gus if you are tired.”

The boy and his dog were ten feet from the shore, but the water deepened quickly. She couldn’t touch the bottom after a few feet. Her dress floated around her, weighing her down. Kicking hard against her skirt, she fought to get closer to her brother.

“Edward, which foot is tangled? Can you move it at all?”

He squealed in a high-pitched voice, “I’m stuck.”

Her brother’s panic was palpable. She couldn’t breathe, as if the glacial water were blocks of ice compressing her chest.

“Edward, give your leg a great pull. Heave as hard as you can.”

She moved closer and stretched across the water, reaching for his arm.

He nodded with a whisper, “All right.”

She held firm to his arm. Edward jerked his leg once, twice. “I got it, Hen…I got it.” He was free.

“Good work, Edward. Now let’s get out of this blasted cold water.”

Edward started to laugh, either giddy from his close encounter or her blasphemy.

“Do you want to hold on to Gus? Or can you get back on your own?”

“I’m fine now. Come on, Gus.” The boy and dog paddled across the water as if nothing unusual had occurred.

Relieved to see her brother making his way to dry ground, she started toward the shore. The effort of saving Edward and the freezing spring water had taken its toll. Her leaden arms and legs flailed in futile strokes, her movements uncoordinated. The weight of her dress dragged her down into the black water. She kicked and kicked harder. She tried to tread water but her arms wouldn’t move. The feelings of relief over Edward’s rescue turned swiftly to a need to survive.

She searched the shore for someone other than Edward to help her. No one was about on the wet, cold day.

“Henrietta, come on. I’m freezing and Gus is all wet,” Edward shouted.

She considered the idea of Edward pulling her out of the water but, even from a distance, she could see him shaking from the cold. She couldn’t risk his life. She suppressed the alarm darting in and out of her frozen brain.

Fighting against the ponderous dress, she struggled not to sink. Her movements became frenzied, clumsy and ineffective. Her chest ached and her breaths became short. She gulped, trying not to swallow the water when she went under for the second time. She heard a muffled shout but couldn’t answer.

An overwhelming lethargy seeped into her, pulling her into a safe cocoon of heat. She drifted into the warm sensation. The enveloping heat was heavenly. Heavenly? Was she drowning?

She struggled against the hot steel vise closing around her. She couldn’t allow herself to drown. What would happen to Uncle Charles and Edward?

Freeing her arms, she began to punch, fighting for her life. With one wild swing, her hand thudded against a hard wall.

Strong arms lifted her from the cold. “Henrietta, stop or we’ll both be under water.”

She looked up into the intense blue eyes of Lord Rathbourne—the man she detested. The man who made a mockery of all women’s sensibilities.

He pushed her wet hair away from her eyes then pulled her closer to his chest. He caressed her back as he moved effortlessly to the shore. “You’re safe. We’re going to get you and your brother home and out of these wet clothes.”

“Edward? Where’s Edward?” She shifted her weight in his muscular arms.

She couldn’t comprehend what Edward had said. It was as if her brain had frozen with the rest of her body. She couldn’t stop her teeth from chattering or her body from shaking.

“My coat, Ash. We’ve got to get her home.” Lord Rathbourne directed the man who stood with Edward.

Lord Rathbourne’s companion retrieved the coat that had been thrown to the ground. Though aware of the motion around her, she couldn’t focus. Edward was safe, and they were on their way home.

Warm hands rubbed her arms and legs, and then she was wrapped, bundled, and held securely on Lord Rathbourne’s horse.

She nestled into the heat of London’s most notorious rake.

With her hands planted on her generous hips and her feet apart, the housekeeper stood at the top of the Kendal house’s steps. Mrs. Brompton’s shrill voice shattered Henrietta’s torpor. “What’s happened, Lady Henrietta?”

Lord Rathbourne answered before Henrietta could frame a response. “Both Harcourts have taken a plunge in the Serpentine. We must get them out of their wet clothes and into a hot bath.”

BOMAW 1-3 by Mercedes Keyes
Cowboy Come Home by Kenny, Janette
Big Apple Dreams by Solomon, Kamery
A Loving Spirit by Amanda McCabe
The Legend Thief by Unknown
When Gods Bleed by Anthony, Njedeh
Lost to You by A. L. Jackson
Memory of Flames by Armand Cabasson, Isabel Reid (Translator)
Treacherous (The Wolf Pack Series) by Smith, Maureen
When Alice Met Danny by T A Williams