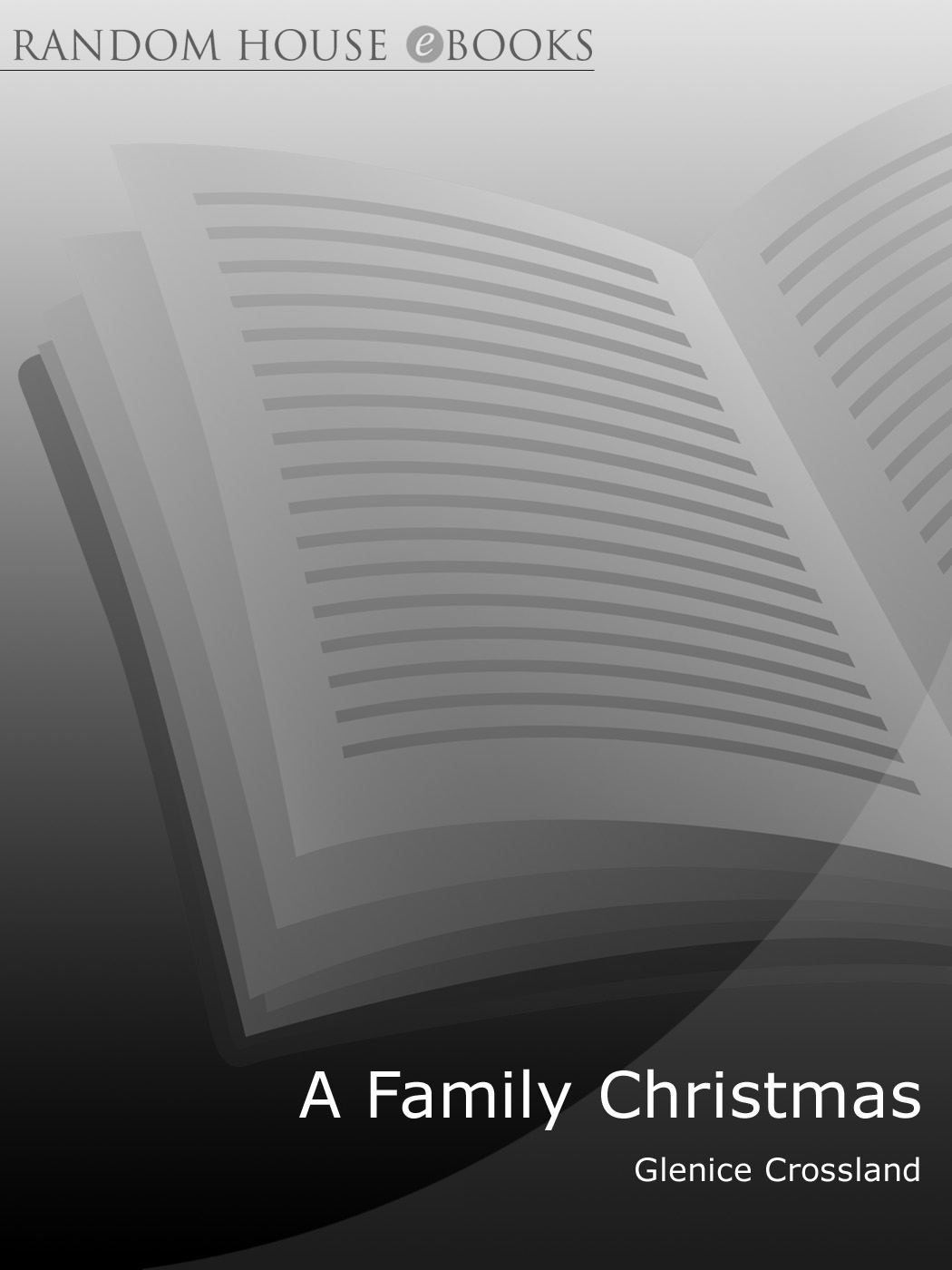 Lucy Gabbitas has just left school and is excited about joining her sisters at the local umbrella factory. But then her beloved father dies of lung disease leaving Lucy and her brothers and sisters broken-hearted. With barely enough to make ends meet, the family receive no sympathy from their tyrannical mother, Annie, and their first Christmas without him holds little comfort and joy.

Things seem to be looking brighter for Lucy when she meets John Grey and falls in love. That is until Annie becomes seriously ill and dies, and Lucy is forced to put her family first. But despite their continued hardship and despair, Lucy resolves to turn their home into a happy one for her brothers and sisters, and for the family of her own she dearly hopes for. And she is determined to make Christmas a joyous occasion for them all once more…

Glenice Crossland lives in Sheffield. She has loved writing from an early age, only taking it seriously after early retirement from her job in a leisure centre. She has read one of her poems on BBC2, had several read on Radio Sheffield and more published in various anthologies. She is well known locally for her watercolours of churches and local traditions. Married with one son and grandchildren she still lives a few hundred yards from the house in which she was born. She is also the author of
The Stanford Lasses, Christmas Past
and
The Ever Open Door
.

The Ever Open Door

For my husband and family,

with love, as always.

With thanks once again to Georgina Hawtrey-Woore and everyone at Arrow for all their hard work on my behalf. Also to Magna Books. Thanks also to the creators of the beautiful book cover designs which I am sure go a long way towards selling my books. Also to my late mother and her sister for sharing with me their memories of the days they worked as umbrella girls. Thanks to my husband and family for their encouragement and to the staff of Stocksbridge Library for their support. Most of all, thanks to all the readers who continue to buy my books. Your enjoyment is my pleasure.

Lucy opened her eyes and peered into the darkness. She could just make out the stockings hanging over the brass knobs on the iron bed. She slid out onto the cold lino and ran to open the curtains. Jack Frost had been in the night and left pretty patterns on the window pane but she hadn’t time to stay and admire them this morning. ‘Wake up, Jane. Father Christmas has been.’ Lucy lifted down the bulky stocking and hurried on bare feet across the landing to her parents’ room. She climbed up onto the bed and scrambled over her dad until she could snuggle down between them.

‘Well I never. I wonder what he’s brought.’ Annie helped the five-year-old to empty her stocking. She loved the excitement of Christmas almost as much as her children.

‘Just a minute, little lass. Let’s have some light.’ Bill Gabbitas reached for the matches and lit a bedside candle, sending shadows dancing on the wall, and setting himself off in a fit of coughing. Jane was the next to crawl up the bed. Annie pulled her down between the blankets and warmed her cold feet between her hands.

The toys didn’t amount to much: a couple of skipping ropes and yoyos, knitted teddy bears which Annie had stuffed with bits cut from an old vest. Annie noticed that one ear had been stuffed more than the others but neither Lucy nor Jane seemed to notice. There were brightly coloured scarves and caps, too. Both little girls decided to wear them. In the toes of the stockings were shiny new pennies and a sugar mouse.

‘Can we come in, Mam?’ Nine-year-old Nellie and Mary, the eldest, perched on the bottom of the bed and opened their stockings, keeping up the pretence of Santa Claus for the benefit of their little sisters.

Ben came clattering down the attic stairs. ‘Thanks, Mam. Thanks, Dad.’ He shoved in between his sisters until he was up on the bed. Ben had a cricket bat – lovingly made by Bill – in his hand and Annie protected her heavily pregnant belly from her boisterous son. Laughing, she reached over and took hold of her husband’s hand.

‘Looks like we shall need a bigger bed next year, Bill love.’

‘Aye lass. It’ll be grand with a new bairn in the house, and perhaps it’ll be a little lad.’

MRS RAWLINGS TOLD
the two girls to sit at the table and she cut two wedges of chocolate sponge. Then she poured two glasses of lemonade. Whilst they were partaking of the refreshment she counted out the money for the bread and popped it in the basket.

‘Our William’ll be coming after today,’ Lucy said. ‘I’m starting work on Monday.’

‘I am, on April the nineteenth my birthday was.’

‘Well! Why ever didn’t yer mention it? Here, let me find you a few coppers then.’ The woman searched in a huge leather purse and gave Lucy a sixpence.

‘It’s all right,’ Lucy blushed, ‘I didn’t tell you so you’d give me something.’

‘Course yer didn’t, love, but yer a good lass, so take it. And I hope yer enjoy yer work. If your William’s as reliable as you he’ll do me fine.’

‘Oh he is, Mrs Rawlings, you can depend on that.’ Bill Gabbitas had brought all his six children up to be reliable and dependable.

On Monday morning Jane and Lucy set off to work with Kitty nervously following in their wake.
Mary
had been gone a good half hour ago. Mary was saving up for her wedding and working all the hours she was offered. The girls hurried up three flights of steps and then Lucy began to panic when Jane instructed them to wait here for Mr Blackmore to set them on, before hurrying away and leaving them there. What if she and Kitty were separated too and she didn’t know anybody?

Kitty’s face was as white as the cloth in which her bread and cheese were wrapped. ‘Look at all them machines,’ she whispered. ‘I’ll never know what to do wi’ ’em.’

‘I expect they’ll show us what to do,’ Lucy murmured.

‘So there you are.’ Mr Blackmore looked at Kitty. ‘By gum, you’re a little ’un, aren’t yer? We’ll ’ave to find a box or summat for yer to stand on. Come on then, let’s get on.’ Twenty pairs of eyes followed the girls along the shop floor. Lucy recognised one or two of them from their school days and began to feel a bit better. Mr Blackmore called to one of them and told her to fix the two girls up with aprons, then Kitty was taken further along the bench and Lucy was shown what to do.

‘Put on the apron and then this pad on top,’ the girl told Lucy. ‘Your job is to straighten these ribs by knocking ’em on this pad, like this. Sometimes if the metal’s too soft they bend and you ’ave to straighten ’em with yer hands, so you ’ave to wear these little leather caps to protect yer finger and
thumb
.’ The girl showed Lucy how to do it. ‘When we finish at end of shift yer’ve got to sort ’em out into two bundles, twenty-one-inch and twenty-four. Yer’ll ’ave to do it yerself now or I shan’t earn any bonus.’ The girl left Lucy to get on with it and then came back. ‘Oh I forgot, because yer a new lass yer’ve got to keep that bucket filled so we can wash our ’ands.’

‘On’t next floor, and don’t slop it all over’t floor when yer fetch it, else somebody might slip and break their neck.’

Lucy started on the umbrella ribs, thinking she would never remember everything she had been told and wondering what Kitty was doing. The girl next to her was working so fast Lucy could hardly see her hands moving. She would never be able to do that. Perhaps Mr Blackmore wouldn’t keep them on if they couldn’t keep up with the others. Then what would happen? She’d be in for a beating from her mam, that’s what.

Lewis Marshall came up to her carrying a huge bundle of ribs. She was relieved to hear a friendly voice but she hoped he wouldn’t become too friendly and want to kiss her like he usually did. She daren’t take her eyes off what she was doing. ‘I’ll never keep up with the others,’ Lucy told him.

Lewis laughed. ‘Of course yer will. Everybody’s slow on’t first day. I’ll tell yer what, I’ll keep bucket full, just for today and then you can concentrate on yer job.’

‘I know, I’ve done it for yer, don’t let on to old Blackmore, though,’ Lewis laughed. ‘I’ll expect a kiss in return.’

Lucy blushed, hoping nobody had heard him, but the girl next to her was giggling. Lucy was relieved when the buzzer went, signalling dinner time. At least half a shift was over and it hadn’t been too bad, even if Lewis Marshall did come pestering whilst she was eating her bread and cheese. ‘I’ll tell our Ben if yer don’t go away,’ she told him when yet again he leaned over trying to kiss her. He had fancied her for months.

‘I’m not scared of ’im,’ Lewis said, but she noticed he moved away. Everyone was in awe of nineteen-year-old Ben Gabbitas. At six foot two Ben only had to scowl at someone for them to make themselves scarce. If they had known Ben as well as Lucy did they’d have known he was one of the gentlest people in Millington and no troublemaker.

When Lewis had left, Kitty moved over to where Lucy was finishing her lunch. ‘Don’t take any notice of ’im,’ Kitty said. ‘Ee’s a pest.’

‘Well I wish he’d behave ’imself, embarrassing me like that.’

‘Nobody would think owt; everybody knows what ee’s like, they’re all used to ’im.’

Even so, word had reached the ears of Jane Gabbitas by the end of the working day.

‘What was Lewis Marshall saying to you at dinner time?’ Jane enquired when they set off up the hill.

‘Don’t let him touch you, or you might have a baby.’ Jane was fourteen and knew lots of things that Lucy didn’t.