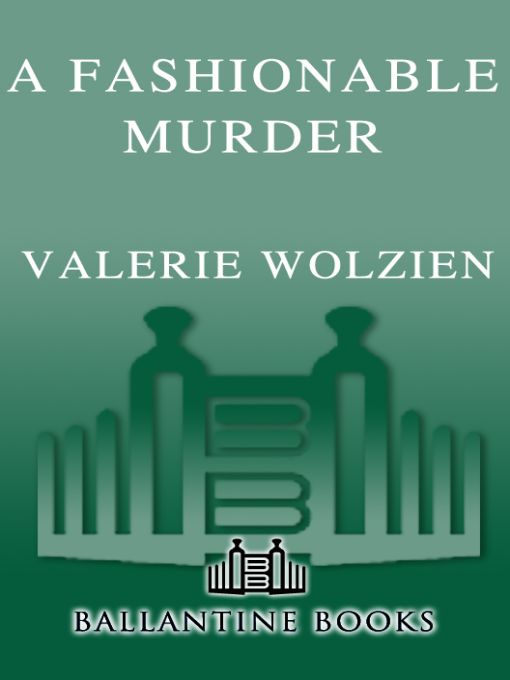 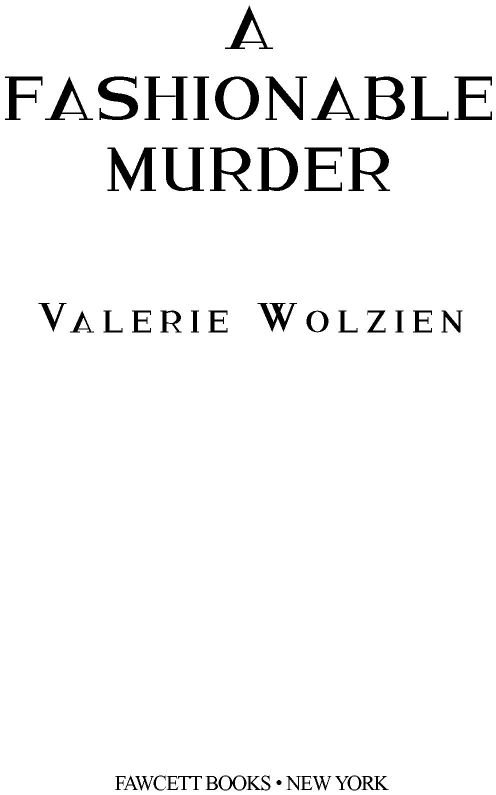 Praise for Valerie Wolzien
and her novels

“Valerie Wolzien is a consummate crime writer. Her heroines sparkle as they sift through clues and stir up evidence in the darker, deadly side of suburbia.”

“Wit is Wolzien’s strong suit. . . . Her portrayal of small-town life will prompt those of us in similar situations to agree that we too have been there and done that.”

This is my twentieth mystery novel. Sometime during the writing of each book, I have been absolutely convinced that I would never finish. I have walked around the house muttering to myself, ignoring my family, eating junk food, and being what my father has always called “an all-around pain in the butt.” So I dedicate this one to my husband, Tom, and my son, Trevor, who have lived through it with me. I could never have done it without their support and encouragement.

THERE ARE PEOPLE who save all year long for a vacation in New York City. They can be spotted on Fifth Avenue in the summer, nervously clutching their fanny packs, convinced the guy with the nose ring will snatch their traveler’s checks the moment they gaze up at the glass skyscrapers. They delay buses as they ask drivers for directions to museums less than a fifteen-minute walk away. They fill the seats of long-running Broadway shows. They eat—and complain—about the overpriced hamburgers in local restaurants. They discover that hours pounding the hot pavement can cause blisters to form in even the most broken-in shoes. They buy cheap T-shirts that will shrink the first time they’re washed. They have a wonderful time.

Others tour the city during the holidays. They go to Radio City Music Hall and see the Christmas Spectacular. They visit the tree at Rockefeller Center along with thousands of others, watching the skaters and munching on glazed nuts bought at a corner stand. They shop for presents for family and friends at FAO Schwarz, happily paying twice what they would at the local Toys R Us back home. They take bitterly cold boat rides around Manhattan. They find it impossible to get cabs and walk the streets for hours, lost and freezing. They have a wonderful time.

But this was February. The snow, which had made the city so enchanting in December, had become filthy slush overflowing clogged gutters. City dwellers who couldn’t afford trips to warm beaches were either inside hard at work or striding purposefully down the sidewalks ignoring the resort clothing displayed in store windows. Panhandlers, discouraged by the cold, leaned against frozen buildings, not bothering to shake stained coffee cups with a few coins dusting the bottom.

One couple, mother and son, were walking up Madison Avenue, heads butting into the wind. Josie Pigeon was miserable, her shoulders hunched, her normally cheerful face bent into a frown; her unruly long red hair had escaped from her scratchy wool scarf and flew around her shoulders. Tyler, her teenage son, striding by her side, was beaming. “Mom, this is great! I can’t believe we’re finally here! It’s so cool!”

Josie didn’t agree. “This isn’t cool. It’s cold. And wet. Look at this!” She lifted one foot and displayed a soaking wet suede pump. “These are my best shoes!”

Josie glanced toward the window he had indicated. A single shoe was displayed in a space her professional expertise judged to be at least six yards square. Hidden halogen lights caused the burnished Italian leather to gleam from pointy toe to three-inch stiletto heel. “Those shoes probably cost more than I made last month.”

“I didn’t mean those exact shoes. You’d look really dumb in those shoes.”

Josie smiled. “They are pretty stupid looking, aren’t they?”

“No way! They’re cool. But they’re not . . . you know . . . for women like you.” Tyler, smart enough to be on the honor roll at one of the most prestigious prep schools in the country, was also smart enough to realize that it was time to shut his mouth.

“I suppose they are about as far from steel toe work boots as it is possible to get,” Josie agreed, sighing and looking around at their fellow pedestrians. Many of the women wore shoes similar to those being offered for sale nearby. These women were striding down the concrete, leaping gracefully over icy puddles, long fur coats covering thin stockings and strappy high heels. As she watched, an elegant blond woman hiked a monstrous, bulgy briefcase over her shoulder, and dashed after a speeding taxi. “Beautiful and tough,” she added to herself.

“How far is it to Sam’s place?” Tyler asked, glancing down at his watch.

Josie knew what he was thinking. “Just a few more blocks north, then we turn right. His building is just east of Park Avenue. Don’t worry, we should be on time.”

“I hope so. Tony says his dad’s on a tight schedule and doesn’t like to waste time hanging around.”

“I don’t think waiting a few extra minutes to meet a houseguest is a waste of time,” Josie said grimly. “Tyler, are you sure these people really want you to be with them? You could always spend your vacation with Sam and me. We’d be glad to have you. We could go to museums, shows, the Hard Rock Café. . . .”

“Mom, Tony and I have plans. We’re going to be busy working on our extra credit project. We won’t have time to hang out at places tourists go! I told you—we’re going to spend the next two weeks in the editing room.”

“We’re gonna have a blast. And this could be my big break. Tony’s dad’s a very important person in the film industry.”

“Yeah, it’s easier to break into films if you know someone. You know I want to produce.”

Josie, who had been under the impression that Tyler’s plans for the future centered on a career in architecture, was surprised to hear this. And wise enough not to comment. Her multitalented son had many options. And, if Josie had anything to say about it, he would do lots of things before settling into a serious career track. Her own abrupt entrance into adulthood as a single parent without an education or any marketable skills caused her to value his freedom and education more than she might have done under other circumstances. “That would be very interesting” was all she said.

Tyler suddenly seemed quite interested in a store window they were passing. “Tony said his dad might be too busy to meet us this morning,” he mumbled.

“No, you don’t understand. You are not going to spend your vacation with a man who is too busy to bother to meet me for a few minutes—especially since he assured me that he’d be here when I spoke to him on the phone last week.”

“I won’t be alone. I’ll be with Tony. Besides, I’m seventeen years old. Lots of my friends from school live in the city. They’re alone here all the time.”

“You mean they can tell a mugger from a stockbroker,” Tyler said, sounding disgusted.

“I mean they know what to look out for,” Josie repeated in what she thought of as her “no-nonsense, I am the mother here” voice.

Apparently it wasn’t carrying across the less than a foot from her mouth to her son’s ear. “Mom, I know how to take care of myself ! Believe me, I’ve done much more dangerous things than being alone in Manhattan.”

“Tyler, you are not making me feel better.”

“Tyler, if Tony and his father aren’t—”

“Hey . . . yeah, Mom, whatever. Look. That’s him. That’s Tony and his father’s that man with him—the one on the cell phone.” Tyler waved his arms in the air, almost slugging an elegant matron swaddled, from ankle to earlobes, in thick amber fur. “Tony! Tony!”

Josie took a deep breath and turned to see whom her son was waving to. Tony was the new suitemate in Tyler’s dorm at school and, while she had never met him, she had heard a lot about him since his arrival in September. Tony, she knew, had his pilot’s license and took off for his mother’s vacation home on the Outer Banks of North Carolina or his father’s place on the dunes in Montauk as often as classes and the required participation in sports would permit. Tony had lived in many countries and was fluent in so many languages that the school had been forced to drop its language requirement for him. Tony’s father was a film producer and his mother was an editor at
Vogue
magazine. Josie had lost track of the many stepmothers and stepfathers that seemed to flow through the young man’s life. Tyler had hoped to visit Tony in New York City on his way home over Christmas break, but family commitments forced the young man to spend the holiday in a suite at the Hotel Plaza Athenee in Paris. Josie, up to her neck in work, had found it easy to resist feeling sorry for the young man.

Putting together all the stories, Josie had expected Tony to be a blasé, world-weary young man, but the adorable blond boy hurrying toward them, a bright smile on his face, could have modeled as a choirboy on a Christmas card. Josie immediately felt better.

The young man proved his upbringing, smiling politely and offering his hand. “It’s very nice to meet you, Ms. Pigeon. Tyler talks about you a lot.”

“My father is back there . . . on the phone. He’s always on the phone. But he should be finished in just a minute.” As if to prove him correct, Tony’s father hung up and looked around for his son. “Dad! Dad! We’re here.”