Read A Gathering of Memories Online

A Gathering of Memories 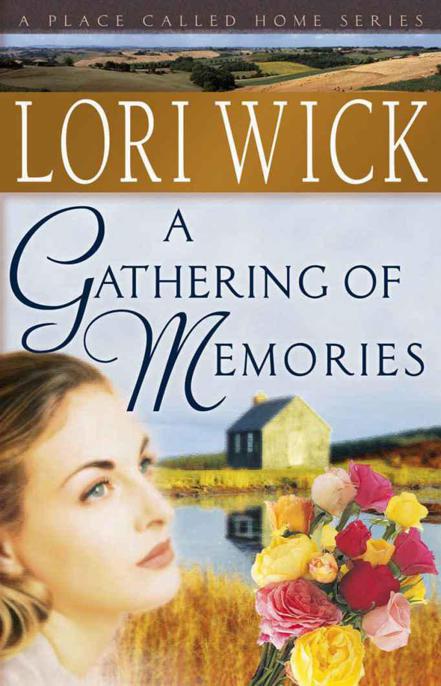 All Scripture quotations in this book are taken from the King James Version of the Bible.

Except for certain well-established place names, all names of persons and places mentioned in this novel are fictional.

Music and lyrics for “Song for the Other Mary” by Timothy Barsness and Lori Wick. Used by permission.

A GATHERING OF MEMORIES

A gathering of memories / Lori Wick.

Sequel to: The long road home.

All rights reserved
. No part of this publication may be reproduced, stored in a retrieval system, or transmitted in any form or by any means—electronic, mechanical, digital, photocopy, recording, or any other—except for brief quotations in printed reviews, without the prior permission of the publisher.

This book is dedicated
to my loved ones, both near and far, whom
I would never have known
were it not for the system of adoption.

Other books by the Author

A June sun was setting over the grass-covered bluffs that curved around the south side of Baxter, Wisconsin. At the edge of that small town perched a rundown shack that took on an orange glow in the strange evening light.

To the casual observer the shack appeared empty, with no movement or lamps lit in the continuing dusk. But the shack was inhabited, if not lively.

If a visitor were to pass beneath the low door and into the first of two rooms, he would encounter a bed against one wall, low, and not very wide, but made up neatly with no sign of anyone sitting or lying there recently. A large stove, every inch of it black, dominated one wall and made a tight squeeze for anyone attempting to pass the small wooden table with its assortment of mismatched chairs.

A visitor would instantly see that the room was empty of life, and in order to find anyone, would have to walk through this bedraggled little room to the equally small bedroom, where a lamp burned so dimly it did not show from without.

In the bedroom, from a cot, four pair of solemn eyes watched the bed in the corner where a form lay motionless. The owners of those eyes had been in that position for most of the day. The bed’s occupant, the center of attention, had been breathing loudly—a raspy sound that could be heard through the house. But nothing emanated from that corner now.

No one spoke, but all eyes shifted as another child, the oldest, rose from her kneeling position beside the bed. They watched, one too young to comprehend, as she lifted the blanket to cover the face of their dead mother.

Again the oldest took the initiative. Without a word the children were ushered out to what was referred to as the kitchen, where they took chairs at the table.

The question came from the youngest, and even though she received no answer, she was silent as conversation began around the table.

Within a few minutes everyone had been assigned a job. The oldest worked near the youngest with supper preparations, making an attempt to explain about their mother. Another child set the table and still another hauled water, while the oldest boy headed into town for the preacher.

The preacher wasn’t really someone they knew or had a reason to trust, but no one could think of anyone else who would care to come. For that matter they weren’t sure he would, but it was worth a try.

The oldest boy was back at the house before the preacher arrived and they were all at the table when his carriage was heard in the yard. Eyes met in mutual uncertainty before anyone rose to let the man enter. For the first time in the lives of these five children, they wished their father were home.