Read A Heartbeat Away: Quilts of Love Series Online

A Heartbeat Away: Quilts of Love Series 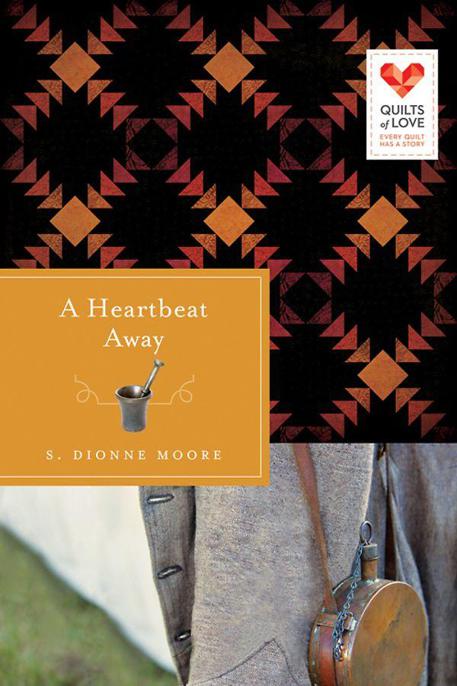 “I thought
A Heartbeat Away
was very well-written and was very effective in the portrayal of the personal side of war. Although the story is based on fictional characters, it tells a story that was very real to many during that time period. Moore’s style is an easy and enjoyable read.”

“
A Heartbeat Away
is a poignant tale as deep and varied as the backdrop upon which it’s set. Remarkable characters facing extraordinary circumstance, amidst the turmoil of the Civil War, make this story lasting and memorable. A MUST read!”

“S. Dionne Moore is a master storyteller whose way with words takes her readers deep into her story world. In
A Heartbeat Away
, she has outdone herself with the word pictures she paints of Civil War–time Maryland and a heroine torn between both sides of the conflict. Beth Bumgartner carries wounds of another kind than the Confederate soldier she nurses, wounds that are healed through her working an unfinished quilt her mother has given her. This is a story that needs to be read and savored.”

—Pamela S. Meyers, author of
Thyme for Love
and
Love Finds You in Lake Geneva, Wisconsin

Other books in the Quilts of Love Series

For Love of Eli

Pieces of the Heart

A Sky Without Stars

A H
EARTBEAT
A
WAY

No part of this publication may be reproduced in any form, stored in any retrieval system, posted on any website, or transmitted in any form or by any means—digital, electronic, scanning, photocopying, recording, or otherwise—without written permission from the publisher, except for brief quotations in printed reviews and articles.

The persons and events portrayed in this work of fiction are the creations of the author, and any resemblance to persons living or dead is purely coincidental.

The Scripture quotation on
page 110
is from The Authorized (King James) Version. Rights in the Authorized Version in the United Kingdom are vested in the Crown. Reproduced by permission of the Crown’s patentee, Cambridge University Press.

Library of Congress Cataloging-in-Publication Data has been requested.

For my beautiful daughter
.

Love you to the hundredth power. So there!

Tip of the hat to RCM History Tours owner Bob Murphy for all the information he shared and the time he took to give me a private tour of the battlefield. He filled my head with the voices that became these characters.

Joe opened his eyes to darkness. A shadow moved against the semiblackness of a window and his senses screamed the warning. He jerked, gasped at the jolt of pain, and fell back. His heart pounded with fear at his weakness as his mind struggled to place where he was. Ben? Where was he? They had stayed close to each other. Too close. Ben had blamed himself when Joe had taken the minié ball in his shoulder. Joe heard his own voice as if from a great distance; his explanation to ease Ben’s guilt: “We’re in a war, what do you expect?”

He blinked as a vision of Ben flashed through his pounding head. He massaged his forehead, felt a hand on his shoulder, and swung to his left, rolling to avoid the contact. He fell into nothingness, slammed onto the floor. Pain took his breath.

Through the waves of nausea he realized one thing—the voice was soft. Feminine. When the hands touched his shoulder, his face, he felt the softness in the fingertips, reminding him of home and gentler times.

“You’re in a springhouse on our farm,” the voice rushed to explain. “You were injured.”

He gritted his teeth against the effort of even sitting up. Her hands left his arm, though he could hear the swish of her skirts. A flicker of light, then a touch to raise the wick and brighter light.

“Can you stand?” She went to the bed and yanked the covers back up that had twisted with him to the floor. “I’ll try to help you.”

“No.” He spat out the word, and rocked to his knees, fighting for consciousness through every move. Why was there such searing pain? The minié ball injury? “I’ll get up.”

She guided him down onto the thin mattress and covered him with a quilt. He felt like a child being put down for a nap. Her fingers swiped hair from his brow, and he swallowed against a new tightness in his throat. How long had it been since he’d felt a gentle touch?

“I’ll get my grandmother. Perhaps she can—”

“Stay.” He exhaled hard, wanting nothing more than to feel her touch against his face again. To hear the softness of her voice.

She’d made as if to rise but settled back in the chair and into the circle of light. “Do you know who you are and what happened?”

Such a lot of words. Too many for him to make sense of them all. Golden light shimmered against her dark hair and revealed a flash of darkness along her cheek. A dimple? He blinked and felt the grit in his eyes.

“Go back to sleep. It truly is the best thing for you.”

“Ben . . .” He let the word linger, his mouth dry, lips stinging. He raised his hand to touch the burning spot along his
mouth, but the effort was too much. The woman’s voice was a whisper in his ear, his eyes too heavy to open, and he didn’t want to. All he wanted was to know if his brother was safe. The woman had to know something, didn’t she? Lost on a rise of pain emanating from his chest—or was it his shoulder?—the question spun away from him. Giving up the fight, he dragged air into his lungs and forced himself to relax against the waves of discomfort.

Gerta Bumgartner stood sentry over the inert form of the Confederate soldier, a position Elizabeth had seen her grandmother take many times in healing the sick and suffering. But this—this was different and they all knew it.

“His wound is bad, Grandmama,” she worried aloud as she stepped into the coolness of the springhouse.

Gerta’s sharp eyes, only now dimming with a fog that made it hard for her to focus, took in the dark interior of the room. Babbling along the floor, a spring ran up through the ground, paused to maintain a pool of water, then gurgled off beneath the wall and out into the bright September sunshine.

Another roar vibrated through the air. The two shared a look, each understanding and mirroring to the other the worry of cannons and charging brigades moving in their direction. The war was edging closer to them every minute.

“The fighting is fierce. The South will prevail.”

Elizabeth should have been used to the shocking things Gerta said by now. It was part of the reason her grandmother stayed to herself and was no longer called on as much among the citizens of Sharpsburg. “How can you say that, Grandmama, knowing that your grandson fights for the Union?”

Gerta chuckled and wiped her hands on a linen cloth that lay across the wounded soldier’s chest. “I say what I think.” She shot her a mischievous grin. “Tomorrow, Bethie, I’ll root for the Yanks.”

Beth took in the soldier’s gray complexion, his dry, bleeding lips. No shoes. His feet were cracked on top, the bottoms splotched with blisters and dirt.

“A right sad lot of men, if he’s any example,” Gerta said. “Did you burn the clothes and the bedding?”

“Yes.” She couldn’t help grimacing. She’d been forced to burn the rag of a dress she’d worn while dragging the louse-infested mattress and clothes out to the fire. Her ankle and leg ached from the work.

“I stripped him down and scrubbed him hard.” Gerta pointed to a long tube hung on a leather string around his neck. “A louse trap.”

Beth raised a brow. “Another one of your remedies?”

Another cackle of glee burst from her grandmother. “Can’t take the credit for this one. It works, and there was plenty of his blood to bait the trap.”

Beth stared at the narrow tube and decided she didn’t want to know any more.

Gerta stroked the man’s forehead almost as if she feared his skin would tear with the least amount of pressure. Beth had felt that tender touch before. Felt her grandmother’s gentle pressure against the hollows of the eyebrows that helped relieve pressure in the head, or the massage that eased pain and relaxed taut muscles in the neck. “Tell me about the package,” Gerta said.

For a moment, she couldn’t fathom to what her grandmother referred; then she recalled the brown-wrapped package beside the armchair in front of the fireplace. “I haven’t opened it yet.”

“I can see that, girl, but where did it come from?”

She managed a stiff nod. “She wanted me to have something of home.”

“Yet you haven’t unwrapped it?”

Beth shrugged. “I haven’t been homesick.”

Gerta straightened and put a hand to her back, a grimace tightening her features. “I think I’ll sit a spell. We’ll need to bake more bread. As much as we can over the next few days.”

“I’ve already started.” She didn’t bother to remind her grandmother that she’d said the same thing often over the last two days, ever since word of the Confederates moving into Frederick had been received.

Elizabeth followed her grandmother’s brisk steps outside at a slower pace. Already the September air blew hot. A beautiful day, redolent with the rushes of gentle breezes and a mobcap of white clouds scudding along the blue sky. Yet, even the warm rays of the sun seemed restless as they stabbed through the clouds and then disappeared, only to reappear within seconds. She wondered, fancifully, if even God was nervous about the artificial white cloud capping South Mountain and the battle raging there.