Read Cry of the Peacock Online

Cry of the Peacock 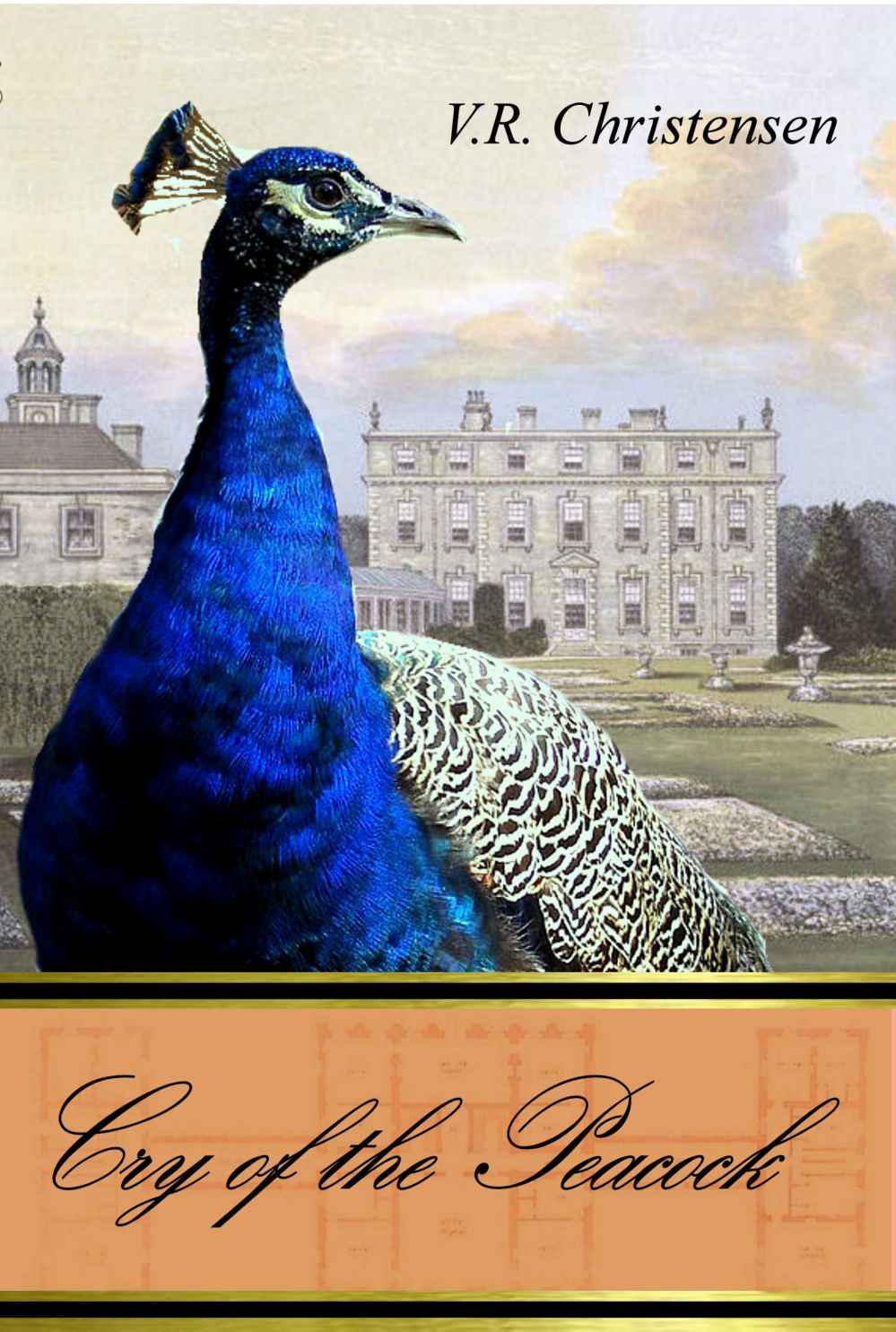 “A lovely, haunting story. The first paragraph drew me in and I could not stop. The author’s writing is superb, like a river flowing through a beautiful landscape that is sometimes light, sometimes dark and threatening. A gorgeous book!”

“What scandalous mystery, what delicately hinted corruption wrought behind closed doors! The dialogue flows effortlessly, drawing the reader into the times. Of Moths and Butterflies is masterful for its genre!”

“
Of Moths & Butterflies
reminded me of the timeless classics of Jane Austen and the Bronte sisters—a nice, long, book that truly swallows you up and makes you oblivious to the world around you. A beautiful novel!”
Historical Novel Review 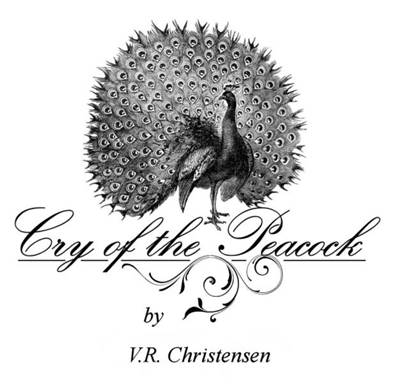 This is a work of fiction. Any similarities to persons living or dead are purely coincidental.

Cover design by V.R. Christensen and Captive Press. Please see the copyright page at the end of this book for copyright information on quotes and images used in the creating of this book.

For more information about the author, see the
About the Author
page at the back of this book.

Illustrations by B. Lloyd. For more information about her, see the
About the Artist
page at the back of this book.

A
uthor’s note to the
A
stute
R
eader

It is likely to occur to the Astute Reader that this work lends itself to comparison with a previous work by the same Author. The Author wishes the Astute Reader to know that it is not by coincidence or accident that this has occurred. In fact, it might be advisable to note that
Of Moths & Butterflies
was a direct result of the Author’s having written this work, and having written it first.

I began this book, under the title
Kentridge Hall
, in April of 2004. Upon completing it, it occurred to me that there was another side to the story. What if our heroine had made a different choice? What if, in fact, she found she had no choice at all? What if she, for reasons beyond her control, found herself at once with the inability to give herself and yet devoid of the choice not to do it?

Knowing it would be an exceedingly difficult story to write, knowing, in fact, that I had to draw from certain of my darker and deeply personal experiences, memories, and feelings, I set about to write it. That was
Moths
.
Cry of the Peacock
, as it is now called, is a much simpler story, a purer story.
Moths
was written for a particular audience. This is a book all, I think, can relate to. And, with the rise in popularity of Historical Fiction and their subsequent costume dramas, it is my hope that it will be received with great pleasure. 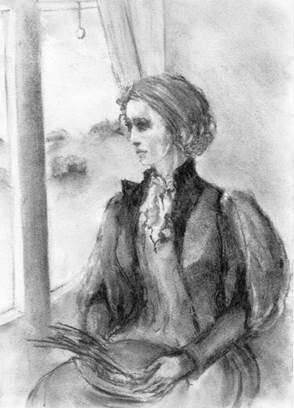 A
BBIE STARTED AWAKE as a scream split the air. She dressed as quickly as she could and made her way to the room above her own. All was tense stillness there.

Mariana sat beside the bed, tending the young woman who lay still and spent upon it.

“Let me help, Mariana. You need some rest.”

Mariana looked up, tears sliding down her cheeks. “It is over, Abbie.”

“Over?” She looked at the young woman again, bloodied, still and pale. A wave of dread spread over her. “Is she…?”

“She lives. But the child…”

He looked at her, but shook his head solemnly.

Abbie looked next to her aunt. In the haze of her waking, and the headache that lingered still from the day before, she had failed to notice that her aunt held something in her arms. An infant. Blue and lifeless.

She felt suddenly weak. The room was unbearably warm and close. The guttering jets made her head pound all the more in the pulsing light. She left the room, and as quickly as she could, made her way down the corridor and then down two flights of stairs. And she did not stop until she was standing outside. She needed air. She needed to be away. But there was no escaping her aunt’s house. This, now her parents were gone, was her home, and she must find—or make—a place within it.

In the distance she heard the cry of a peacock. Was there a park so near? The fog cleared to reveal a cab driving by. It did not pass, however, but stopped before the house adjacent, where Mr. Meredith, her aunt’s lawyer, lived and kept offices. One of his clients, perhaps.

The gentleman alit from his cab and approached the lawyer’s gate, where he examined the placard very carefully. Finding it not to be the one he wanted, he turned toward her aunt’s house. As he came closer, she saw that the look on his face betrayed how little he enjoyed his errand. He stopped at the gate, while she remained half hidden by the overgrown boxwoods.

Aunt Newhaven’s door bore no number, and so he stared for a moment, as if willing it to give up its secret. Of course it would not. He heaved a frustrated sigh and stood back to examine the façade.

It was then he saw her. His look of irritation, of disapproval even, changed to one of surprise, and then into something else entirely. He appeared to be suddenly, and sincerely, concerned.

“Are you quite all right?” he asked her.

Confused in her near delirium, and by the unexpected appearance of a stranger, she had no answer to offer him.

“Is there some way I can help you?”

Could he take her away from here? Could he take her from London and return her to the home she had left, hardly a month ago, on a sprawling estate in Hampshire? She shook her head in answer, both to his question, and to her own. “You are looking for someone?” she asked him instead.

He smiled with grey-blue eyes. He was very handsome when he smiled, and he looked, if possible, vaguely familiar, though there was certainly no reason he should. “I think I must have the wrong address. Perhaps you can help me.”

“I doubt it. I–” But how to explain her circumstances? She lived here but was a stranger to the neighborhood. She resided with her aunt, and with her sister. And with half a dozen other young women who— Oh why had she come outside!

“Miss Gray?” It was Mr. Meredith’s voice. He was just emerging from his house, and was now approaching. “What are you doing standing here in– Good day, sir. Can I help you? Are you acquainted with this young lady?”

Mr. Meredith’s speech seemed to have a curious effect on the stranger, the look of concern faded. The look of irritation, of disapproval, returned.

“Not at all,” he said, rather too emphatically, and gracing her with an actually disapproving look, as if that, after all, had been his purpose all along, he turned to walk away.

“You will at least tell me your name, sir,” Mr. Meredith called after him.

He received no reply and so followed, but the stranger was in his cab and pulling from the curb before the lawyer could catch up to him.

“Arabella!” Her aunt now. “What on earth do you think you are doing? Come inside this instant!”

And while her aunt scolded, and Mariana attempted to steady Abbie’s shaking hands in her own, and as Mr. Meredith returned with more questions—“Do you know that man?” “What did he want?” “Did you get his name?” “Are you sure you’ve never seen him before?”—Abbie felt her strength drain from her. Her vision began to blur and dim. The walls tilted and began to crush down upon her. The floor rose up to meet her.

She met it half way.

Between a Bear and a Hard Place (Alpha Werebear Romance) by Red, Lynn
Unridden: A Studs in Spurs novel by Cat Johnson
Briar Patch by Linda Sole
Deeper Water by Jessie Cole
Falcon’s Captive by Vonna Harper
In My Skin by Holden, Kate
The Not So Secret Emails Of Coco Pinchard by Bryndza, Robert
Seti's Heart by Kelly, Kiernan
B006NZAQXW EBOK by Desai, Kiran
A Crimson Dawn by Janet MacLeod Trotter