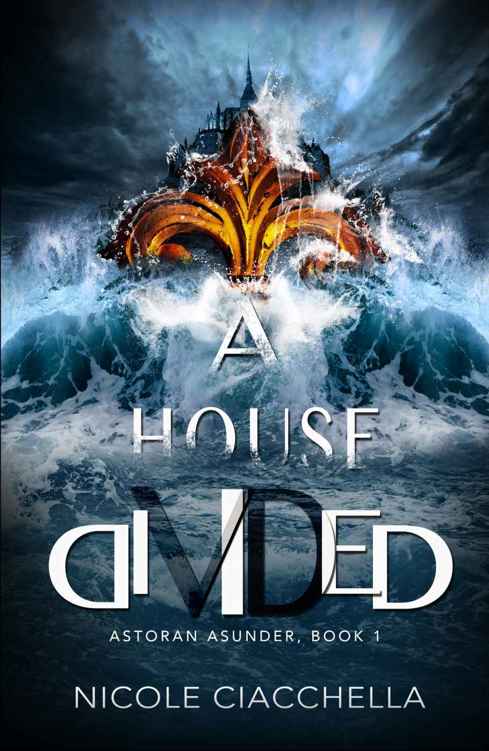 A Note from Nicole

Dystopian and Post-Apocalyptic Books by Nicole

Other Books by
Nicole Ciacchella

The Eye of the Beholder
(Beauty and the Beast retold)

From the Ashes
(a Cinderella reboot)

For my family. I love you all more than words can say.

"Begging your pardon, miss, but you have a visitor," Vivie said, entering Cianne's sitting room with her head bowed. She kept her eyes lowered in what Cianne felt was undue deference, but, then, Vivie was nothing if not proper. Perhaps Cianne ought to have been pleased that Vivie's deference was genuine, unlike the false solicitousness of most everyone else in House Staerleigh.

"I'm not expecting anyone today," Cianne said, standing and smoothing her skirts so they concealed the stiletto she'd been oiling. It wasn't the dagger Elder Borean had given her for her sixteenth birthday, the customary gift presented to all members attaining the age of majority. Blade emblazoned with the House crest of a ship tossed about by a stormy sea, the dagger was a distinctive weapon meant to mark the bearer as a member of House Staerleigh. While it wasn't unusual for House members to carry other ornamental yet functional weapons, it would have struck them as unusual for Cianne, particularly seeing as how hers were far more functional than ornamental.

"And yet someone is here all the same," said a familiar voice, much to Vivie's chagrin. The maid opened her mouth as if to protest, but then sank into a low curtsy and slipped from the room.

"Lach, you know how Vivie is," Cianne chided. Fluttering one hand in an imitation of the discomposed Vivie, Cianne concealed her other, slipping the stiletto between the cushions on her settee as she rose. She made plain the amusement behind her words. "She'll spend the next two hours berating herself for such a breach of protocol."

Cianne knew very well what effect those twinkling eyes had on most of the eligible members of House Staerleigh—and even on some of the ineligible members. Long was the House's history and proud its many illustrious members, but Lachlon was a favorite. One of the most gifted of all Seafarers in recorded history, a favorite House jest was that Lachlon wasn't so much the son of Moiria and Toran as he was the son of Cearus, Lord of Water.

Indeed, everything about Lach seemed heaven-touched. From his abundant waves of windblown chestnut hair to his burnished skin to his deep green eyes, the same shade as the mysterious depths of the sea, Lachlon's appearance struck even the most resistant of eyes. His face was chiseled in a manner that recalled classical works of sculpture, making him almost aggressively handsome. Tall and broad, his size was imposing as well, a product of time spent mostly at sea, the strenuous work providing him with a taut layer of muscle that might have been the envy of any Battle Master.

Lachlon's gleaming smile widened as Cianne studied him, and she averted her gaze. "Taking me in?" he asked in a teasing tone.

"It's been nearly three months. I wanted to be sure the salt hasn't eroded you yet," she replied, keeping her tone light. Dear though her friend was to her, her feelings for him didn't extend beyond friendship, yet it seemed she was doomed to always be provoking false hopes in him. "What are you doing here anyway? I thought you weren't due back for another fortnight."

Lowering his eyes, he gave her a sheepish smile and she smiled back.

"Sea-blessed. I should have known," she said, to which he responded with a modest shrug. Lach was well aware of the strength of his gift, but he didn't parade it about as did some of the others, which was just one of the things Cianne liked best about him. House Staerleigh—like most Houses, really—tended to be populated by the ambitious and boastful.

"I brought you something," he said, producing from behind his back a package wrapped in salt-stained brown paper.

"Another addition to my collection?" she asked, her eyes lighting up. She extended an eager hand toward the gift, but he lifted it out of her reach with a grin.

"Using your height advantage over me is hardly fair. Surely you can do better than that, Lach. You've been using that same trick since we were children," she said, planting her fists on her hips. His eyes trailed her movements and uncomfortable heat flushed through her.

"Payment, please," he said in a prim tone.

Sighing, she made a show of rolling her eyes. "Very well. Three hundred seventy-six and counting."

"As many as that already?" he asked, his surprise genuine.

"Yes, as many as that already. You've been four years at sea on your own ship now," she reminded him.

She couldn't help but be proud of him. As was standard practice in Astoran, Lach had begun his apprenticeship at the age of sixteen. Because of the promise he'd shown during his testing, he'd been assigned to Captain Riorn's ship, where he'd swiftly distinguished himself. Riorn was a gifted Seafarer, but Lach's innate skills had dwarfed his, and the boy had quickly become invaluable to his captain. When Lach's two years of apprenticeship were up, his reward had been to be named captain of his own vessel, a first in the House's history. It had been small, true, but it had been a vessel of his own, and each year he had been rewarded with a larger one. At twenty-two, he was captain of the largest ship in the Staerleigh fleet, the youngest member ever to have been awarded such an honor.

"Four years," he said, shaking his head as if he couldn't believe it, even though Cianne was certain he had vivid recollections of every last moment he'd spent at sea. She understood the subtext underlying his words. He had been patient with her, not wanting to push her, but he would expect an answer soon, and the thought filled her with dread.

He wasn't alone in expecting it. Her father had canvassed the subject many times over the years, and each time he brought it up a little more of his subtlety was lost. Daerwyn expected his daughter to marry Lach, and why wouldn't he? Even if she and Lach hadn't been bosom companions since childhood, he was inarguably the most desirable of all prospects in House Staerleigh, and if there was one thing Daerwyn prized above all else, it was the power of connections.

"May I see it now?" she asked, extending a hand with a smile that wanted to waver. She tried so hard to avoid the topic, but she knew she couldn't avoid it forever.

Everyone expected them to marry. Tongues had wagged since before Lach had all but declared his intentions by making a point of returning to Cearova expressly to attend her eighteenth birthday celebration. Their strong bond, the depths of their friendship, had become public laundry for airing and inspection. Several other families resented Cianne for the power they felt she exerted over him, something she found laughable, considering she had not the least desire to marry him. Were it possible for her to rid herself of the power she held over his heart, she would do so gladly.

Throughout their teenage years she and Lach had joked about everyone's expectations, and she had thought his feelings for her were the same as hers for him: beginning and ending at friendship. But at her eighteenth birthday celebration he had overindulged in the strong wine he had gone to Leonovia to procure for her gala, and he had confessed his love for her. All color had drained from her face, her expression telling him everything he had needed to know. He hadn't spoken a word of his feelings for her since.

She had mentioned to him more than once that she thought it might be better if she didn't marry. Devoid of any Adept abilities herself, she had nothing valuable to contribute to the House bloodlines. Wasn't that what everyone whispered behind her back, thinking her too oblivious to know? She had overheard them speaking with spiteful pity about how unfortunate it was that the gods had seen fit to grant Daerwyn and Annalith, two such gifted House members, with a daughter who wasn't gifted.

She had grown to suspect that Lach had latched onto her insecurity over her lack of Adept abilities as an explanation for why she didn't consider herself in love with him. He seemed to have misattributed her unwillingness to marry him to a highly developed sense of House devotion on her part. He hadn't acted as anything more than her friend for the past four years, but she knew he had never stopped harboring the hope that he might one day win her.

"I suppose you've proven yourself worthy," he said, depositing the package in her hand, his fingertips brushing over her palm.

Had she tried hard enough to convince him she had no feelings for him? Sometimes she doubted herself. And sometimes she found it difficult to resist the powerful allure of acquiescence. Refusing to marry him would make her life even more difficult than it already was, would likely lead to her being even more ostracized. What place could she hope to find in the House without him? She wasn't alone in lacking Adept abilities, but positions of prominence were reserved for those who were gifted. Those who weren't, like Vivie, were told they were valued by their House and could serve it in other manners, an honor that was couched in shame.

Could she live with the disdainful whispers, with the cold, unforgiving eye of her father, who let her know in all manner of ways how disappointing he found her, his only child? Why not marry Lach? She was fond of him, and there were far worse fates she could suffer. The whispers wouldn't stop, but he would shelter her, provide her with a security she could never hope to gain on her own.

Disgust curdled her stomach. How could she even contemplate something so mercenary? It would be beyond reprehensible of her to betray Lach by living such a lie, knowing that every time he spoke words of love to her she would see another's face in his place.

Years of covert practice had taught her to control her emotions, to gather them and stow them away where they could not interfere with the actions of her body. Thus, despite the troubled state of her mind, her fingers were steady as she unwrapped the gift, her smile eager with anticipation.

"Oh, Lach, how lovely," she said, her throat tightening.

She traced the glass bauble's form with a careful fingertip. At every port he visited he purchased something made out of glass for her, though she wasn't certain why he had chosen such a theme for his gifts. No matter how many times she asked him, he demurred with a secretive smile. Depending on the port, these objects were sometimes as mundane as a crude wine glass, but his latest gift was anything but mundane.