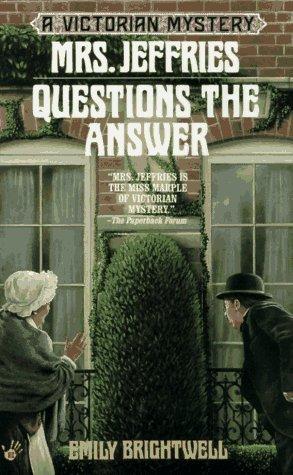 INSPECTOR WITHERSPOON ALWAYS TRIUMPHS
…HOW DOES HE DO IT?

Even the Inspector himself doesn’t know—because his secret weapon is as ladylike as she is clever. She’s Mrs Jeffries—the determined, delightful detective who stars in this unique Victorian mystery series! Be sure to read them all…

The Inspector and Mrs. Jeffries

A doctor is found dead in his own office—and Mrs Jeffries must scour the premises to find the prescription for murder!

One case is solved and another is opened when the Inspector finds a missing brooch—pinned to a dead woman’s gown. But Mrs. Jeffries never cleans a room without dusting under the bed—and never gives up on a case before every lose end is tightly tied…

The Ghost and Mrs. Jeffries

Death is unpredictable…but the murder of Mrs. Hodges was foreseen at a spooky seance. The practical-minded housekeeper may not be able to see the future—but she can look into the past and put things in order to solve this haunting crime!

A businessman has been murdered—and it could be because he cheated his stockholders. The housekeeper’s interest is piqued…and when it comes to catching killers, the smart money’s on Mrs. Jeffries!

Mrs. Jeffries On the Ball

A festive Jubilee celebration turns into a fatal affair—and Mrs. Jeffries must find the guilty party…

Mrs. Jeffries on the Trail

Why was Annie Shields out selling flowers so late on a foggy night? And more importantly, who killed her while she was doing it? It’s up to Mrs. Jeffries to sniff out the clues…

Mrs. Jeffries finds herself doing double duty: cooking for the Inspector’s household and trying to cook a killer’s goose…

Mrs. Jeffries and The Missing Alibi

When Inspector Witherspoon becomes the main suspect in a murder, Scotland Yard refuses to let him investigate. But no one said anything about Mrs. Jeffries…

When a local publican is murdered, and Inspector Witherspoon decides to listen to his own inner voice, trouble starts to brew for Mrs. Jeffries…

After a theatre critic is murdered, Mrs. Jeffries uncovers the victim’s secret past: a real-life drama more compelling than any stage play…

THE INSPECTOR AND MRS. JEFFRIES

THE GHOST AND MRS. JEFFRIES

MRS. JEFFRIES ON THE BALL

MRS. JEFFRIES ON THE TRAIL

MRS. JEFFRIES AND THE MISSING ALIBI

MRS. JEFFRIES AND THE SILENT KNIGHT

MRS. JEFFRIES AND THE FEAST OF ST. STEPHEN

MRS. JEFFRIES IN THE NICK OF TIME

MRS. JEFFRIES AND THE YULETIDE WEDDINGS

MRS. JEFFRIES AND THE MISTLETOE MIX-UP

MRS. JEFFRIES DEFENDS HER OWN

Copyright © 1997 by The Berkley Publishing Group.

This book may not be reproduced in whole or in part,
by mimeograph or any other means, without permission.

For information address: The Berkley Publishing Group, a member of
Penguin Putnam Inc.,

This Book is dedicated to Amanda Belle Arguile
The sunshine of my life.

Hannah Cameron smiled slyly as she stepped into the darkened room. Good, she thought, it’s black as sin in here. No one would be able to see a thing. That should make the surprise even better. Hannah patted the pocket of her emerald-green velvet gown, making sure the box of matches was still secure on her person. It wouldn’t do to let a small detail like forgetting the matches cause her to ruin the plan. No, she’d waited too long for this night, planned too hard to let it go awry now.

Moving cautiously, she edged further into the darkness, toward the French doors on the opposite side. Her heart pounded and her dress rustled loudly when it brushed against the settee as she eased past. She stopped, turned and looked toward the closed door through which she’d just come. It wouldn’t do for one of the servants to come snooping about now. Not when she was so close to
achieving her goal. But she heard nothing. Most of the servants should be fast asleep. That was one of the reasons the little tart felt so safe. The silly minx didn’t realize anyone was on to her tricks. But by heaven, she’d find out differently tonight.

Her eyes adjusted to the darkness and through the faint light filtering in from the balcony, she could see the outline of the lamp she’d carefully placed on the table. Next to the table was the balloon-backed chair she’d put there earlier that evening. She wanted to be comfortable while she waited. Who knew what time the little tramp would actually come home? Reaching into her pocket again, she pulled the matches out and set them down next to the lamp. Then, wanting to be certain that everything was going according to schedule, she went to the French doors and peered out into the night. Across the garden, she could see the faint glow of a gas lamp rising above the high walls. She squinted, trying to see if the lock was still disengaged as it had been earlier. But there wasn’t enough light to see. She had to be sure. Holding her breath, she eased the door open and shut it again. The door made the faintest of noises in the quiet house. But she was satisfied. It was still unlocked.

She giggled softly and then her laughter died abruptly as she heard a faint creak. She whirled around and peered through the blackness to the door leading to the hall. No sign of light there, so it must still be closed, she thought. But Hannah wasn’t taking any chances. She glanced to her left, squinting hard to make sure the only other door in the small sitting room, a door that led to a rarely
used guest room, was still closed. Nothing there either. Hannah shrugged, decided the creak she heard must have been the house settling and turned back toward the window to continue her vigil. She concentrated on staring out into the garden, watching the shadows and wondering when her quarry would arrive.

The thick carpet masked the sound of the footsteps creeping up behind her. Suddenly, she gasped and made a strangling noise deep in her throat. But the knife that had been plunged into her back had struck true and deep. Her heart stopped pumping. In an agony of pain, she couldn’t find the breath to scream for help. She wheezed and choked, her hands flailing wildly in the air until finally, her knees buckled and she collapsed upon the floor.

“I tell you, it’s just not convenient now,” Mrs. Goodge grumbled. The cook nodded her gray head emphatically, pushed her spectacles back up her nose and gazed around the table at the rest of the household of Upper Edmonton Gardens, home of Inspector Gerald Witherspoon of Scotland Yard.

“But Mrs. Goodge,” Mrs. Jeffries, the housekeeper, said softly, “I don’t think you’ve any choice in the matter. Your Aunt Elberta will be here tomorrow.” She was a plump, kindly looking woman with dark auburn hair liberally sprinkled with gray at the temples, intelligent brown eyes and a fair complexion that contrasted nicely with the bronze-colored bombazine dress she wore.

On a Beam of Light by Gene Brewer
Haunted by Tamara Thorne
Beach Winds by Greene, Grace
Jade: Earth's Last Hope Against the Undead by Kenneth W. Cain
Ritos de muerte by Alica Giménez Bartlett
Way to Go by Tom Ryan
Accession of the Stone Born: The Vigiles Urbani Chronicles by Ken Lange
Closer Than They Appear by Riley, Jess
Before by Joseph Hurka
Horror in the East: Japan and the Atrocities of World War II by Laurence Rees