Read A Step Farther Out Online

A Step Farther Out 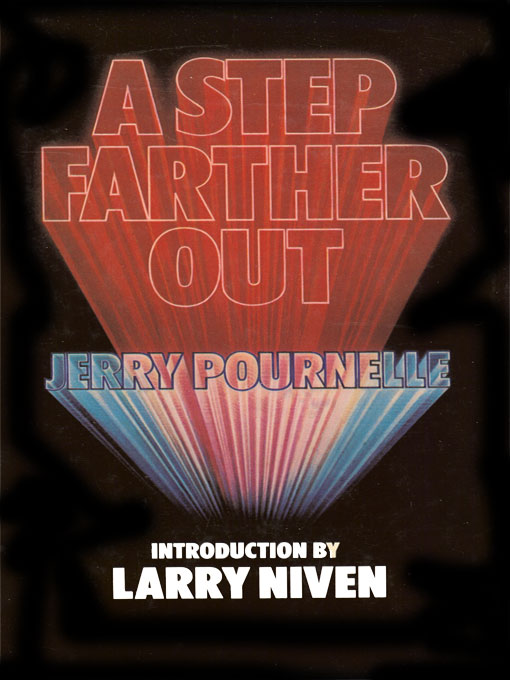 A STEP FARTHER OUT
Jerry Pournelle

Research for this book was supported in part by grants from Pepperdine University and the Vaughn Foundation, to both of whom the author gives respectful thanks. Opinions in this work are the sole responsibility of the author.

It is obviously impossible to thank all those who have significantly contributed to a work this size. However, special thanks are due to Ejlar Jakobssen, who first encouraged me to do a regular science column; to Jim Baen, his successor as editor at
Galaxy,
who became invaluable for his topic suggestions and who unarguably improved the result; to Freeman Dyson, who generously granted ideas and interviews; to Dr. Gerald Yonas and Dr. John Penitz of Sandia Corporation; Dr. Petr Beckmann; Russell Seitz; A E. van Vbgt and Robert Bloch for their encouragement; Edmund Clay; and Larry Niven. Thanks are also due the members of the Los Angeles Science Fantasy Society, Inc., who were hardy enough to listen to my readings of these essays before they saw print.

It is also traditional for an author to thank his wife for putting up with him while he went through the emotional storms so often associated with writing. In my own case the thanks are for reasons considerably more valid than tradition.

PREFACE:
THE FREEDOM OF CHOICE
by Larry Niven

Jerry Pournelle is out to
make
the whole world rich.

He's been at this for some time. Like a good many of his colleagues, Jerry was sucked into the space sciences by science fiction. He was building rockets for the government back when they had to steal the parts from other projects, and get the work done by sneaking back into the plant after clocking out. He's been building the future since I was in grade school, and he's still at it.

Of course, he would prefer to build it his way. Jerry has less of the ability to "suffer fools gladly" than anyone I know. (I'm not too good at that myself.)

His ambitions are impressive. In this book you'll find laid out for you several routes to a future in which the entire world is as wealthy as the United States is today . . . and that is as wealthy as any nation has been in human history. He does not intend that we should confine ourselves to Only One Earth.

Well, you'll get to that. Let me deal with another question. Do we
want
the whole world rich?

I happen to think we do, but I've heard other opinions.

Do you feel that your soul and body will benefit if you eat nothing but organically grown fruits and vegetables? You may well be right; but there's a reason why those scrawny carrots are so expensive. Without fertilizers and bug sprays the tomatoes, etc., might not come out of the ground. (Ours didn't!) Wealth lets you pay someone else to grow it. If you go the whole route, forming a commune, living as your ancestors did, eating only food you grow yourself without technological help . . . then wealth lets you go on eating after the crop fails.

More generally, the right to live as if you were poor is inalienable. What you stand to lose is the right to live otherwise. Through your laziness or your inattention or through listening to the wrong saviors, you may condemn all future generations to involuntary poverty.

Nobody can be forced to spend wealth. That applies to you as thoroughly as it applies to the Indian rice farmer or Brahmin mendicant. Either can simply ignore the wealth that Dr. Pournelle proposes to drop on his head.

Granted that there are problems. A wealthy world would aggravate the servant problem no end.

Remember when people could sell themselves into slavery in order to eat? There was a ready market, because machines did not yet compete with muscle power. Those halcyon days are gone. With no good reason to fear for their jobs, servants have already become arrogant enough that most people would rather let a machine do it.

Well, why not? In the past few decades we've developed ultra-dependable ovens, vacuum cleaners, dishwashers, washer-dryers, soaps and detergents and other specialized chemicals for tasks each of which was once served by elbow grease (and somebody else's elbows, with any luck). The controls on my microwave oven have a better memory than my mother's cook, and my mother's cook quits more often.

In an age of inflation, the price of computer capability is going
down.
Ten years from now, your chauffeur may well be a computer; and why not? It would take up less room in the car and
far
less room in the house.

Consider backpacking. Over the decades, what was once a test of survival has become comfortable. Roads carry you into the wilderness. There you carry freeze-dried food and a lightweight mummy bag and air mattress on a contoured pack with a hip belt. Naturally the trails grow crowded. The population increases, the wilderness decreases. Already people propose to put glittering solar power collectors all over perfectly good deserts, instead of in orbit, as God intended.

If four billion people could afford to buy Kelty packs and sleeping bags, a certain minute percentage would go backpacking. And the world's wilderness areas would be jammed! What happens to the original backpacker, the man who needs the solitude of an empty trail?

No sweat. If we follow Jerry's route, we'll be moving a lot of our industries into Earth orbit and beyond. We'll be mining the Moon and the asteroids, and using free fall to keep heart patients alive and to manufacture ball bearings and single-crystal whiskers and strange new alloys. Let's continue that process. Move
all
of Earth's industries into Earth orbit. Turn the Earth into one gigantic park. There'll be room for the backpackers.

Does the world need to be rich? Suppose the worst: suppose none of the money is yours. What does the wealth of a society do for you?

The last time I spoke on this subject, someone in the audience called me a "bourgeois" for the first time in my life. Do we bourgeoisie tend to overemphasize wealth? Maybe. Someone else pointed out that,
if we
were all to spend most of our time in meditation, in seeking out the strengths and weaknesses of our own souls, we would use very little of the world's resources.

She was right, of course. I did have to point out that one would get the same benefits from being dead; but even that isn't the point.
Choice
is what matters. You have the right to choose your profession or lack thereof, your friends, when and whether you get married, what clothes you wear, how and whether to- cut your hair and shave your face or legs, and whether you spend twenty-four hours a day meditating. But that right depends absolutely on your ability to walk out! If the pressure from your parents or neighbors is too much, hop on a bus and go. Change cities, if necessary. You don't have to resist the pressure to conform. There are people living exactly as you would like to. Find them!

What does it take to maintain these freedoms? Not much. Classified ads in newspapers, a nationwide telephone network, your car and a network of highways and gas stations, several competing airlines, a public police force—actually a fairly recent invention, that one.

Fred Pohl's biography speaks of another freedom—a freedom you will hopefully never need. Fred grew up during the Depression, in a society that could not yet afford Welfare. There was no bottom to failure in those days. You could starve in the street, just like in India. Far and few were those willing to claim it was good for their own souls.

Oh, there's one more freedom worth considering, for those of the female persuasion. Laws tend to pragmatism. Your legal right to be considered the equal of a man depends on physical strength being irrelevant; and that depends on machines. Women have been slaves in most societies throughout most of human history. Sophisticated contraceptives help too; they allow you to avoid compulsory pregnancy. Peasants don't manufacture contraceptives.

If you're my age (forty) or younger, you've been living in a wealthy world for all of your life. Perhaps you haven't noticed. It's time. The sources of our wealth are running out. Dr. Pournelle will show you where to go for more.

Foreword
by A E. van Vogt

It is hard to over-praise this collection of articles on the latest developments in science, or their author. But I'm going to try.

All of these pieces appeared originally in
Galaxy,
a major science fiction magazine. When the first one was printed in the April 1974,
Galaxy,
I was motivated to write the following letter to Jim Baen:

Dear Editor:
I was pleasantly surprised -when I finally opened your latest issue—the April—and saw Jerry Pournelle had done a science article for
Galaxy.
This is sf magazine science fact really moving up in the world. Of all the people I have met in my life, Jerry is one of the most colossally educated in science. He had advanced training in systems engineering, psychology, physics, mathematics, logic, and political science. He is the only science degree person I have ever known who was able to explain coherently the entire Velikovsky controversy, an hour later do the same for the Atlantean legend, and then, in a major talk, describe the new, dynamic, holographic view of the structure of the brain. Jerry has Isaac Asimov's memory in a younger body, and it comes out by instant association in a similar electrifying voice. Several sentences in his article referred to new developments in aerospace and energy science that were hitherto unknown to me—and I
try
to keep up. After reading that, the future already looks brighter to me. Scientifically oriented readers will now have to add
Galaxy
to their list of publications they need to keep up with what's going on.

That was published in the July 1974, issue. Now, here we are more than four years later. During the interval, Jerry has not only written a science article for every issue of
Galaxy;
he has also become a major visiting science lecturer at universities, and has gone up in the sf literary world to become—hear this!—one of the half dozen authors in the field who have received advances of more than a hundred thousand dollars. In 1973 he Avon the John W. Campbell, Jr. award as the most promising new sf writer of the year. In 1977, he and his collaborator, Larry Niven, were paid an advance of $236,500 for the paperback rights of their sf novel, LUCIFER'S HAMMER.

Patricia Dusenbury - Claire Marshall 01 - A Perfect Victim by Patricia Dusenbury
Five Have a Mystery to Solve by Enid Blyton
Worms' Ending: Book Eight (The Longsword Chronicles 8) by GJ Kelly
The Bottle Stopper by Angeline Trevena
Yayati: A Classic Tale of Lust by V S Khandekar
What Mad Pursuit by Francis Crick
Against Me (Cedar Tree Book 3) by Freya Barker
(2 Book Box Set) Loving The White Billionaire: 2 & 3 by Monica Brooks
Love From the Ashes by Cheryl Persons
Seeing Yourself Through God's Eyes by June Hunt