A Tale of Two Lovers 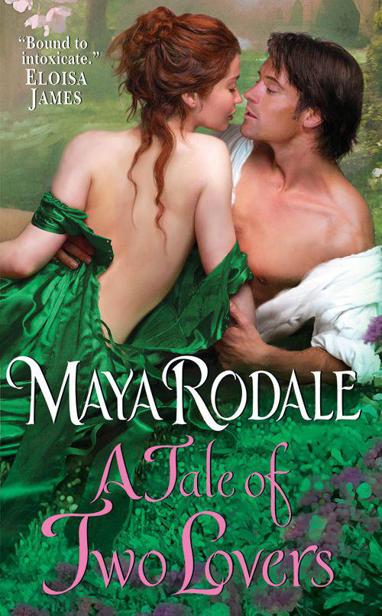 A Tale of Two Lovers

This book is dedicated to Denise,

who is also typically forthright.

even though I didn’t take your suggestion

to name all the characters Tony.

The Gentleman’s Trouble and Strife

T
he backstage of the Drury Lane playhouse was no place for ladies, but Julianna, Lady Somerset, had suffered enough of what proper women did and did not do. She adjusted the short veil slightly obscuring her face, clung to the shadows and kept her eyes wide open for scandal.

She had seen the notorious Lord Roxbury exit this way. Without a second thought, she followed him. In her experience, to rely on a man was the height of folly—unless it was to count on Lord Roxbury to get tangled up in a scandalous situation. He was a godsend to gossip columnists everywhere.

It was widely suspected but never confirmed that Julianna was the infamous Lady of Distinction, author of the column “Fashionable Intelligence” for the town’s most popular newspaper,
The London Weekly
. Since that was, in fact, the truth, she was on a perpetual quest for gossip.

Thus, if Lord Roxbury went skulking off backstage at Drury Lane, she followed.

She sought a tall man who moved with confidence and radiated charm. His hair was black and slightly tousled, as if he’d just gotten out of bed. Frankly, he probably had. Many a woman had sighed over his eyes—plain brown, in her opinion. And his mouth was another subject of intense adoration by women who either had kissed this infamous, glorious rake or longed to do so.

Julianna Somerset could not be counted among the legions of ladies who fawned over him. Her heart and body belonged to no man—not after she had survived a love match gone wretchedly wrong. Like Roxbury and his ilk, the late Lord Somerset was a charmer, a seducer, a man of many great passions, and ultimately a heartbreaker.

Julianna had tasted true love once; it had a remarkably bitter aftertaste.

But that was all in the past. Julianna no longer had to sit at home wondering where her husband was, whom he was with, and how their love had faded to nothing. Other people’s business was her focus now.

Hence the following of Lord Roxbury, backstage at Drury Lane, late at night. A man like that could only be up to no good.

Julianna turned to see Alistair Grey, her companion for the evening. He reviewed plays for the same paper and they often attended the theater together. Tonight they had seen
She Would and She Would Not
, starring their friend, the renowned actress, “Mrs.” Jocelyn Kemble.

“Have you discovered anyone in compromising positions yet?” Alistair asked in a low voice, linking his arm with hers.

“Everyone is on their best behavior this evening,” Julianna lamented softly. “But I swear that I saw Roxbury dash off this way.”

“I don’t know how you see anything with that veil in this light,” Alistair said.

“I see plenty. Certain things are hard to miss,” Julianna replied. She had a gift for eavesdropping and an eye for compromising positions and drunken antics. Dim lighting and a black mesh veil did nothing to diminish her talents.

“This hall is desolate, Julianna. Let’s go back to the dressing rooms where everyone is drinking and in various states of undress. Surely you’ll find more to write about there than in this dark and dusty corridor.”

“Yes, but I saw a couple go off this way, and the man looked just like Roxbury. You know how he is,” she persisted. That, and she didn’t particularly want to be in a crowded dressing room with a half dozen women in their underclothes and two dozen men ogling them.

“I know, but it’s probably just some prop mistress and a third son of an impoverished nobleman,” Alistair said dismissively.

“In other words, nothing remarkable,” Julianna said, heaving a sigh.

The low rumble of a man’s laugh broke the silence. In the dark, Julianna gave Alistair a pointed look that said, “I told you so.” Together they crept closer, always taking care to remain in the shadows.

There was just enough light from a sconce high on the wall to discern a couple embracing. It was not the wisest position—in a corridor, near a light—she thought, when there were certainly darker and more anonymous locations here for a little romp. But one could be overwhelmed by passion anywhere. Her own deceased husband had been overwhelmed with passion while driving his carriage, and that was the last thing he ever did. In fact, he had been overwhelmed with passion quite frequently, though never with her.

Pushing aside bitter memories of her past, Julianna stepped closer, intent upon discerning their identities. The couple might only be theater underlings but if perchance one of them was a Person of Consequence, she would certainly need to report it.

What she saw shocked even her.

As her eyes adjusted to the light overhead, she identified their position: One—tall and dark-haired—clasped the other around the waist, from behind, pulling his partner flush against him. As for the other one . . . his hands were splayed upon the wall, supporting them both, arching his back, turning his head back to accept the kiss of his mysterious
male
paramour.

This was beyond scandalous.

This was the sort of item that would cement her reputation as the very best.

It would be a serious blow to her archrival, the infamous gossip columnist at
The London Times
otherwise known as the Man About Town. He would never be able to top this!

Julianna cursed her veil and stepped forward to gain a closer look. In the process, she tripped over a broom that someone had left carelessly propped against the wall. She swore under her breath.

It clattered onto the floor. The couple jerked apart and instinctively turned in her direction. One man’s face was obscured, ducking behind the other for cover. Thanks to the light above she could see the other man’s face clearly.

Oh Lord above! Lord Roxbury!  With a man!

An earl’s only son embracing another man was
news.
In her head she began to compose her column:

Has London’s legendary rake, Lord R—so thoroughly exhausted the women of the ton that he must now move on to the stronger sex? Indeed, dear readers, you would not believe what this author has seen. . . .