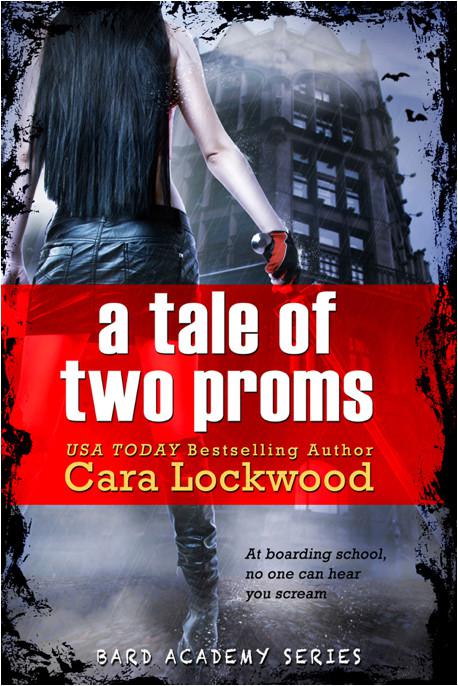 A TALE OF TWO PROMS

This is a work of fiction. All of the characters, organizations, and events portrayed in this novel are either products of the author‘s imagination or are used fictitiously.

A Tale of Two Proms

A TALE OF TWO PROMS

But, mostly, it was just the worst.

Because all I could see was the boy I loved and he was dancing with someone else.

She was wearing a killer dress—a fitted satin red—and her dark hair was swept up and knotted in an elaborate twist. She met my glance with a smug smile that told me she knew she’d won already as she curled one arm protectively around his neck and pulled him closer.

My chest felt like it had been split open, that all the best parts of me were running out onto the floor, seeping into the cracks in the tile, slipping ever father away from me. I put my hands over my heart to try to hold myself in, but I was melting, disintegrating, my whole life dribbling through my fingers and pooling in puddles on the floor.

And yet, through the shock and the pain, I thought
I should’ve seen this coming.
I had known when I met him that he was made for someone else.

This was his destiny—and mine.

Together again. Together forever.

I could hardly see anything. It was dark in the forest, darker even than usual, since the clouds were covering the moon. My feet took me down the worn path to the pond, the route I’d taken dozens, probably even hundreds, of times before. I had been down the trail so many times this year I could do it blindfolded. My hand trailed along the vines and fern branches that grew out along the path. The sky above me stretched into deep violet, the shadows lying dark and inky black on the ground. Somewhere in the distance, a bird cawed. My heart sped up as I passed the big white boulder, the one marking the entrance to the clearing. I scooted around it and came to the big pond. In the sky, the bright full moon broke free of the clouds, casting a silver glow on everything.

“Heathcliff?” It was a question, my voice barely a whisper. He said he’d be here, and he was never late. We’d been meeting here every night since the ice had thawed. Yet, the hard thump of my heart in my chest told me I was still nervous. I knew the risks he took to see me alone, and what it would mean if we were caught.

Just when my prick of worry was beginning to blossom into a gnawing jab, I felt his warm fingers wrap around my wrist. He spun me close and pulled me into the broadness of his chest. Before I could even utter his name, he’d covered my lips with his. The kiss was all Heathcliff, raw and powerful. When he kissed, he left none of himself behind.

It was Heathcliff who pulled away first. He was always the one with more self-control. I attributed it to his old-fashioned manners. That is, when he chose to use them. Often, he didn’t bother. His gaze, always so fierce, grew softer as he drank in my eyes under the full moon.

“I’ve been wanting to do that all day,” he whispered, and his voice ran like a tremor under my feet.

“Me, too,” I sighed. It was hard to pretend I didn’t love him, which I had to do all day every day at Bard. We were forbidden to date by the faculty. I would pass him in the halls or the cafeteria, my eyes cast down, pretending I didn’t notice him. That I didn’t long to touch him. That I wasn’t counting every minute until the sun went down.

At this moment, I glanced up, glad to be able to look at him as freely as I wanted for the first time that day. His nearly black hair was slightly ruffled, his dark eyes sharp. He was broad and muscular and tall. He looked like he might be twenty, but that was nowhere close to his real age, which was somewhere around a hundred and forty years old. Then again, fictional characters don’t exactly age like we do. He’d been plucked from the pages of
Wuthering Heights
nearly three years ago, emerging whole into my world, so that he could turn it upside down.

Now, he was leaning over me, his strong hands linked together, resting possessively around my lower back.

“I want to do that again,” Heathcliff said, pulling me closer.

“But what if the world ends?” I smiled. It was what the Bard faculty feared more than anything—me, a girl from the real world, and him, a boy from the fictional one, together. Never the two worlds should meet or there would be a zombie army apocalypse or we might all disappear into a black hole or all known laws of space and time would collapse. Or something equally dire and end-of-the-world like.

“I’ll risk it,” Heathcliff said and dipped his head to kiss me again. The blood rushed through my ears and my skin felt like it was tingling. Everywhere. I don’t know how long that kiss lasted. A minute? An hour? But it was me who pulled away first this time.  I felt light-headed suddenly and my knees turned to Jell-O.

Heathcliff held me fast, as if worried I might fall to the ground without a steadying hand. I was worried about the same thing. Heathcliff took me by the hand and pulled me to the shores of the pond. We sat on a big flat rock there, his legs touching mine. This was good because my knees didn’t seem to want to work anymore. He pulled me close to him, and I leaned in, taking in the warmth and solidness of his body, like the contours of a chair made for me.

“Why don’t you?” Heathcliff challenged.

I laughed, because I thought he was teasing. But when Heathcliff didn’t join in, I realized he was dead serious. I turned to look at him and I saw a somber look darken his face.

“You could stay—after,” he added.

He was talking about the thing we never spoke of—graduation. It was coming in a couple of months, and there wasn’t anything either of us could do to stop it. After that, I was supposed to go back home to Chicago and Heathcliff would be sent back into the pages of
Wuthering Heights
.

“How?” We’d been down this road a hundred times before. Heathcliff was bound by magic to the island. We both knew he couldn’t leave. And then there was the other problem—the one he didn’t know about. I’d been accepted to Penn. I had the letter in my pocket even now.
Congratulations, Miranda! We’re happy to welcome you to the University of Pennsylvania one of the oldest schools in the Ivy League…

It had been my first pick school. They had a Writer’s House and I knew I could pursue creative writing there. I hadn’t believed it at first when I’d gotten the thick acceptance packet in the mail. The irony was that I had picked schools I thought were too competitive, the ones that would never accept me. I never actually thought I’d get in. It would’ve been an easy out.
Hey, Mom and Dad, I tried to get into college, but looks like no one will take me! Guess I should stay another year at Bard!

But my plan had backfired. Now I had an acceptance letter and no idea what to do with it.  The letter was in my pocket, burning a hole there. I’d just gotten it this morning and I had to tell Heathcliff, but I wasn’t quite sure how. Plus, I didn’t know
what
to tell him. It’s not like I’d decided anything.

“You could stay,” Heathcliff said as if he’d been reading my mind. “We could be together.”

“Stay how?” My voice sounded too harsh. I tried to soften it. “Where?”

“The faculty would never allow it.” If Heathcliff refused to go back into
Wuthering Heights,
the Bard faculty would never stop hunting him. So far, they’d allowed him to stay only because in
Wuthering Heights
he disappears for three years from the story. No one knows where he went, as it’s never fully explained in the novel. He simply returns a wealthy man three years after running away. The fact he’d now spent two and three quarters of that time with me at Bard didn’t affect his storyline.

But it would if he decided not to go back.

Eventually, he’d have to return to
Wuthering Heights
, to fulfill his destiny as a heartbroken and bitter man who would stop at nothing to get revenge against the people he blamed for his true love’s death.

If he refused to return, he wouldn’t be safe. Not anywhere. The faculty would find him. They had ways.

“They would never have to know,” he pressed.

“They know everything,” I said.

“I could persuade them.” There was a hard edge to his voice and I felt his arm tense, even as he held me. Heathcliff was never one to back down from a fight. But the faculty didn’t respond well to threats. For one thing, they were already dead. Ghosts wouldn’t care if you threatened to do them bodily harm. All of them had once been alive, back when they’d been famous writers. But they’d died before their time, and now they were stuck here, on this strange island, where the characters from their own books could come to life. Did you ever wonder what really happened to Hemingway after he died? Yeah, well, he’s my English Lit teacher. Welcome to Purgatory, Bard Academy style.

“We could make it work.”  If Heathcliff had one fault it was being a little bit too cocky. He honestly felt like he would win—no matter what. Most of the time I was glad he was so confident. It was one of the reasons we’d all survived this long together. We’d faced down some powerful enemies on Shipwreck Island. And every times the odds were against us.

“I don’t know about that,” I said. “I just don’t see how it’s possible.” Wow. When did I become such a pessimist? I realized how gloomy I was sounding. Had I always been that negative? Or was this a new senior-year development? Apparently, instead of senioritis, I was coming down with a heavy dose of cynicism.

Wave of Memories: The Sons of the Zodiac by Addison Fox
Queen: The Complete Works by Georg Purvis
Boy Who Said No : An Escape to Freedom (9781608090815) by Sheehy, Patti
Icon by Frederick Forsyth
The Scottish Lord’s Secret Bride by Raven McAllan
What You Wish For by Winchester, Catherine
The Thief's Daughter by Jeff Wheeler
Days of Ignorance by Laila Aljohani
Cowboy Undercover by Alice Sharpe
Dark Fire by C. J. Sansom