Read A Thousand Rooms of Dream and Fear Online

A Thousand Rooms of Dream and Fear 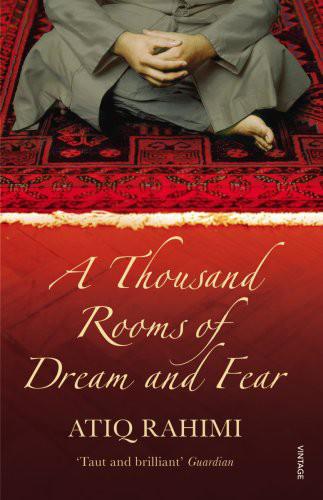 This book is sold subject to the condition that it shall not, by way of trade or otherwise, be lent, resold, hired out, or otherwise circulated without the publisher's prior consent in any form of binding or cover other than
that in
which it is published and without a similar condition, including this condition, being

Addresses for companies within The Random House Group Limited can be found at:

Yes, I have died and I've been buried too. I've been buried in the family vault. Perhaps, who knows, I've been buried next to my grandfather. Or perhaps next to a child and his mother. Da Mullah Saed Mustafa used to say to my grandfather that when the deceased is interred in the grave, he first meets those people buried next to him, then the relatives who died shortly before him. Who knows? Maybe my grandfather will come to see me. He will come. He's bound to come and say, 'So
now
you believe everything Da Mullah Saed Mustafa said! Didn't I warn you about the terrifying black-faced angels Da Mullah Saed Mustafa said descend upon the depraved alcoholic when he dies? And the words of the angel of death who commands the deceased: "You cursed soul, leave this body and flee to your wrathful God!"? This angel then pierces the soul with a spear that, since the beginning of time, has been tempered in fire and brimstone, making the soul skitter about like a drop of mercury. But nothing can escape the angel of death. The other angels arrive to haul the soul up to heaven. God orders them to write the sinner's name in the list of the damned. Then He sends the soul back down to earth to rejoin its corpse. After that, the two interrogating angels, Nakir and Munkar, visit the grave to question the sinner's soul: "Tell us the name of your God? What is your religion? Who is Mohammed?" The corrupt soul replies "I do not know" to each of these questions. So God tells his angels: "My creature lies. Light the flames of hellfire beneath him, and prop the gates of hell wide open so that the fearsome heat will burn him!" And then the gravestone he lies beneath begins to press down on his chest so his ribs are all crushed together . . .'

against the light. But I opened them quick at the sound of his voice. 'Name!
'

No, I am not dreaming. I am not trapped in a nightmare. I am not lost in Barzakh. I am alive and I am awake! Look, I can take the glass from the woman and drink this water
...
I can feel the water coursing through my body. I can feel my burning throat, my aching bones
...
No. This is not a dream. I can clearly make out the slim face of this woman, the dark hair veiling her profile . . .

The child strokes my forehead. I can see him. He's smiling at me. And suddenly, I want to laugh too - laugh at how helpless I am, laugh at the angels
...
at the djinn . . . 'Yahya, come inside!'

Where have I been? Perhaps I've lost my memory! It's not unknown for someone to suffer from amnesia after an accident and to have no idea of who he is or where he comes from. To completely forget his wife, his children and his home
...
his mind a blank sheet, wiped clean of any familiar names or identifying details . . .

I wish that Mahnaz - for all her extraordinary kindness and generosity - were merely a dream. I wish that when I open my eyes, I'd find myself in my room at home, watching dawn break on my mother's lined face as she whispers a prayer above my head, while she wafts the fresh morning air over me
...
I wish she were holding me tight . . .

I trawl the blank white walls of the room searching for a photograph of his father. On the windowsill, next to the candle-stub, are two large books with gold inlaid covers. I take down both of them. One is
Haft Paikar
and the other
Khosraw el Sheerin.
I put them back on the windowsill.

The child has caught me in his dream. I am a dream-creature. I am an imaginary father, an imaginary husband
...
So why bother going back to my life?

'I have no idea! I keep asking myself that, too. All night I've been thinking about everything I've done in the past couple of days - and nothing can explain it. I'm no rebel; I've got no connection to the resistance, to Jihad, or to revolution
...
I was hanging out with a friend who was having to get out of Kabul. After we parted I was simply walking back home. Sure, it was late, well after curfew, and the night patrol caught me. But it was nothing, nothing serious . . . The only thing I can think of is that I made the mistake of calling an ordinary officer "Commander" - and that he thought maybe I was making a fool of him . . .'

I'd gone to the university library to take out the
Book of Shams,
but the librarian told me someone else was reading it. So I borrowed another book and, having given it a quick glance, sat down. At the far end of the table was a young man wearing a pair of dark glasses. His head was buried in a book and he looked as though he wanted to devour every word. Since it happened to be the one I was after, I sidled up to him and coughed, so politely that even I could barely hear myself.

The same day, in the university cafe, I found the scribe of the
Book of Shams.
We chatted together over a cup of tea. His name was Enayat.

At the mention of my name, as always, Safdar's brother stops kneading the dough, and his sweet voice calls from the far end of the bakery,
'
Last night the sound of Farhad's chisel never reached us from Mount Beysitoun . . . It's into the dreams of Sheerin that Farhad now has gone . . .'

If Enayat's brother hadn't killed himself, maybe he'd have turned out like Yahya's uncle. A young man with no youth. With no soul. A body suspended between two arches. I do not want to see what Enayat's brother and Yahya's uncle have seen. No! I do not want my mother to put her breast in my dry mouth for me to suck her blood; or like Enayat's mother, to cry over her own son's empty grave
...
I want to stay alive. 'My mother's here!'

'One day grandmother said that you had died in Pul-e-Charkhi
...
but she can't say that any more, can she, if she sees you're alive?'

'And now my husband's family want me to marry my brother-in-law . . . But that's not what I want
...
I keep telling them I don't feel as though I'm really a widow. No one has seen my husband's body . . . since, in prison, they bury the dead in unmarked, communal graves . . .'

She takes another step away. Her whole body is shaking under her veil. She moves into the corridor. She searches for her shoes. I stand there, lost, like a button dropped on the black and red patterns of the carpet. Yahya and Mahanz come out of Moheb's room. My legs won't move. Without a look, without a smile, my mother says to Mahnaz, 'God be with you
...
May God reward

'But where are
your
family?' I ask her.

My sweating face trapped inside the carpet heightens its smell. Such a familiar smell. The smell of our front room. Parwaneh used to play marbles on the black patterns of this carpet. Farid used to race his matchbox cars along its black lines
...
It was the best carpet in the house -my mother's dowry, given by her father to take to her new husband's house.

Want by Stephanie Lawton
Is Everyone Hanging Out Without Me? (And Other Concerns) by Mindy Kaling
Freakn' Cougar by Eve Langlais
In the Shade of the Monkey Puzzle Tree by Sara Alexi
Captivate her: Laws of Seduction Book 1 by Ava Hayworth
My Alpha Ex Brother in Law Bound by Jeans, Jenny
New World, New Love by Rosalind Laker
Taken by Storm: A Raised by Wolves Novel by Barnes, Jennifer Lynn
Twisted Asphalt (Asphalt Outlaw Series Book 1) by Blue Remy
Daughter of the King by Lansky, Sandra