Read A Time for Change Online

A Time for Change 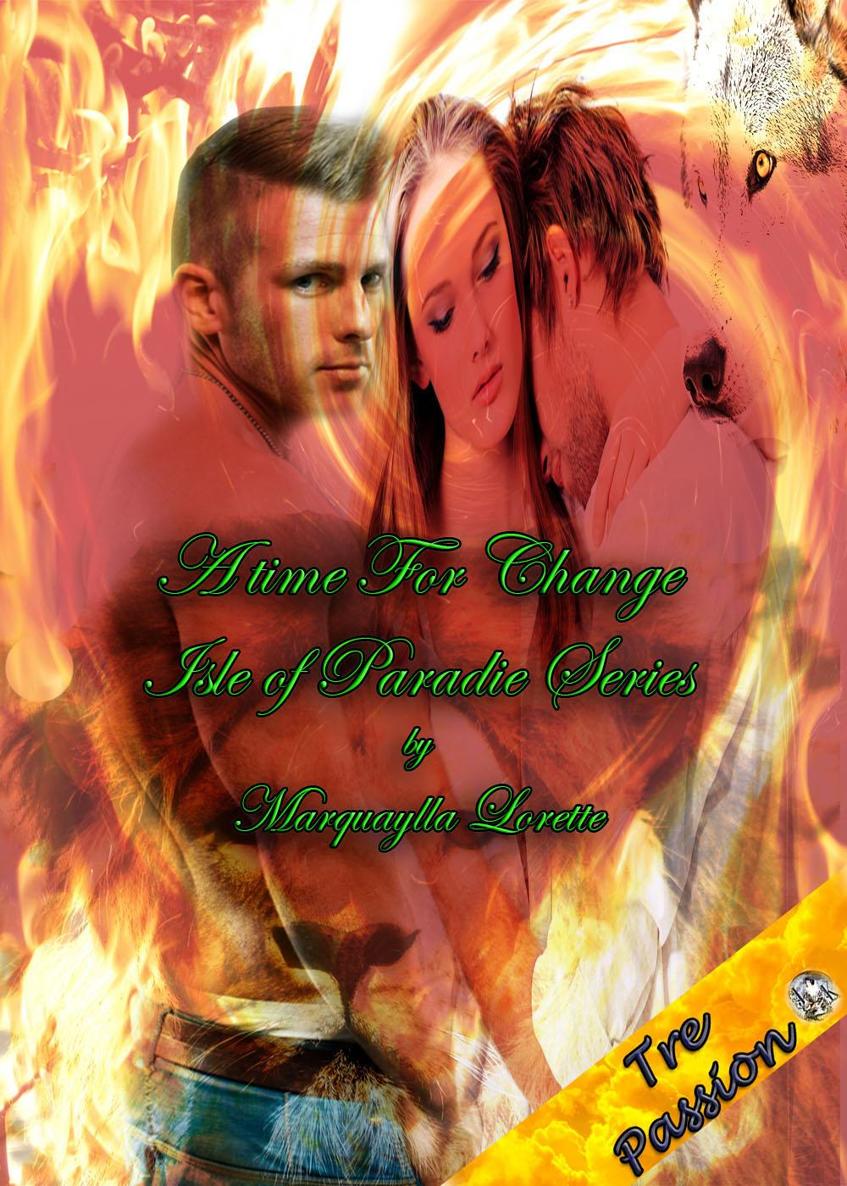 A Time for Change

In Book Two of The Isle of Paradise series: James is a mixed shifter living on the human side of the world since his parents had to flee
the
Isle
of
Paradise thirty years ago.  Back then, many shifters weren’t thrilled with having a mixed shifter couple on the Isle.  After receiving death threats, and countless attempts on their lives, they finally left to protect their unborn child.

Thirty years later, James’s parents are killed, and James flees back to the Isle of Paradise with his sister, Charity, after barely escaping the clutches of their parents’ killers.  To the one person he knows that can help him and his sister, his best friend, Eli.  There he discovers his mates and a life he only dreamed of, but there are some questions he has to get answers to before it is too late.

Chelsea and Ace have been dreaming of finding their mate for years now.  When their mate arrives, they are in the middle of The Beta Battle and building an unsegregated school for the different shifters on the Isle. But there are those out there who don’t want to see them succeed.

Can they finally bring the Isle together, let go of the past to accept their future, and be able to win the Beta Battle?

A time For Change

This eBook is licensed for your personal enjoyment only. This eBook may not be re-sold or given away to other people. If you would like to share this book with another person, please purchase an additional copy for each recipient. If you are reading this book and did not purchase it or it was not purchased for your use only, then, please return to Smashwords.com, and purchase your own copy.

This is a work of fiction. Names, places, characters and incidents either are the product of the author’s imagination or are used fictitiously and any resemblance to any actual persons, living or dead, organizations, events or locales are entirely coincidental.

All cover art and logo © Copyright 2013 by JK Publishing INC

I would like to dedicate this in the memory of my papa Cornelius Savage Sr.

The memories we shared will be cherished for a lifetime. No one had a bigger personality than you did, without even having to say anything your presence was known. I will always see that smile in my mind that could light up a room and the kindness you showed everyone around you.

I would like to dedicate this book to my cousin Dorjon as well. Happy Eleventh Birthday, Djo.

A special thanks to my JK Publishing family, especially my editor, Caroline.

~
Excerpt from The Trinity

~
Excerpt from The Beast at the Gate

Katarina and Zuri woke with a start from the sound of glass shattering in their home.

“What the hell was that, Zuri?” Katarina asked her mate as she sat up in bed.

Just as Zuri was about to answer his mate, an unfamiliar voice could be heard as it shouted cruel words at them from the front of their yard.

“Zuri, Katarina, you are a disgrace to every type of shifter. It is unnatural for a cat and wolf shifter to be mates. Let Ursula perform the un-mating spell on you and we will leave you alone, but only if you stay away from each other and let us help you find a mate. They will not be your true mates but at least they will be of your own kind,” a voice from Zuri and Katarina’s front yard shouted.

Katarina and Zuri were the first shifters to be true mates
with a different type of shifter species. Zuri was a cat shifter while Katarina was a wolf shifter. Their lives had been put through hell from different shifters ever since they learned they were mates on Katarina’s eighteenth birthday seven years ago.

“Come on, Katarina, I have to get you to the bathroom before one of those bricks hits you,” Zuri said before he covered Katarina’s body with his and carried her to the bathroom.

Zuri sat Katarina inside the bathtub and climbed to the window in the bathroom.
He could see shifters of different species on their front lawn with bricks and shotguns in their hands. Zuri was shocked to see some of his and Katarina’s family members in the front of the line leading the pack. This pissed Zuri off.
He felt as though family should stand by you, no matter what the situation was, not lead a pack of vultures to their house with bricks and shotguns in their hands.

Zuri jumped down from the window and shifted into a huge lion, he was going out there to give the Isle of Paradise a piece of his mind. Bullets began flying through their house before Zuri could make it to the bathroom door. He leaped into the air and landed on top of Katarina, who was still in the bathtub. Zuri was careful not to
crush the pup in Katarina’s stomach as he landed on top of her.

Katarina pushed Zuri off her and roared as she shifted when the bullets stopped. She couldn’t believe they tried to kill them, and now she was going out there and killing as many of them as she could.

Zuri,
still in his lion form,
leaped over Katarina and blocked the bathroom door. He roared out in a language only he and Katarina could understand.
‘Katarina, NO!
Think about James, he could be harmed if you go out there,’ Zuri said.

Just before they went to bed a few hours ago, Zuri was able to sniff out the sex of their pup. They agreed to name him James, before drifting off to what they thought was a peaceful sleep.

The mention of James’s name stopped Katarina in her tracks. She had let her anger overpower her commonsense, causing Katarina to act before she thought it through. She had to release her anger somehow or it would fester inside of her until it was uncontrollable and finally exploded. Katarina growled as loud as she could, releasing her anger in the process. The vibrations from her growl shook the ground beneath them. Her energy quickly depleted, causing her to shift back, with Zuri not too far behind her.

“We have to make it to Alpha Baron’s house somehow,” Zuri said as he opened the bathroom door and crawled into their room, just in case the shifters outside had something else to throw or shoot into their home.

As they were crawling into their room, the only Gypsy
alive appeared in front of them.
Zuri was shocked.
He didn’t know whether Aishe, the wolf shifter, was on their side or not, so he dove on top of Katarina to protect her.

“Get off me, Zuri, it is fine.
Aishe is Baron’s first Beta’s mother. She is here to help,” Katarina said as she struggled to get Zuri off her.

“Zuri, Katarina is right. I am here to help you both,” Aishe said as she watched Zuri stand.

“How are you going to help us?” Zuri asked, as he looked up at the woman that he had been scared of when he was a child.

“I am going to get you two off the Isle, somewhere where you’ll be safe,” Aishe answered.

Katarina and Zuri looked at each other in confusion because neither of them had ever been off the Isle.

“We cannot live amongst the humans, remember what happened the last time a shifter or magical being tried that,” Katarina stated with a worried looked on her face.

“If you stay here, your child, as well as you both, will be killed before the Alpha or anyone else can arrive to help. You will be fine living with the humans as long as neither you,
nor your children, accidently shift in front of them or tell them our secrets,” Aishe said as she reached into her pockets for her secret potion.

“Wait a minute, you said children, we are only having one child, a boy,
who we will name James,” Zuri said as he looked up at Aishe.

“We will leave the Isle if only to give our children a fighting chance,” Zuri said to Aishe as he accepted the potions for both him and Katarina.

“I already have a home and clothes on the human side for you. There will
be a job waiting for you, Zuri, working with my parents’ human best friends. Do not worry, they know
who my parents really were before they were discovered by the other humans. If you need anything, do not be afraid to ask them.

“I need for you both to take the blue potion and pour it over your clothes and body. So the shifters outside will not be able to track you. Now drink the red potion.
It will make you both invisible and make sure no one is able to sense your presence on the plane.

“I am going to teleport you both to the plane. My parents’ friends will be at the airport on the human side in a black sedan waiting for you to arrive. There will be a sign in their car window with your son’s name on it. They are the only two who will be able to sense your presence,” Aishe said with an urgency in her voice.

Zuri and Katarina poured the blue potion over each other before drinking the red potion.

BeyondAddiction by Desiree Holt
Dreams of Leaving by Rupert Thomson
In the Hands of a Chef by Jody Adams
Saving Sky by Diane Stanley
Grave Doubts by Elizabeth Corley
The Firm by John Grisham
And Then You Kiss (Crested Butte Cowboys Series Book 3) by Heather A Buchman
Gone With a Handsomer Man by Michael Lee West
Dangerous Promises by Roberta Kray
Good Girls Do It Well (A Bad Boy Billionaire Romance) by Michelle, Aubrey