Read My Sister's Boyfriend (The Trouble With Twins 1) Online

My Sister's Boyfriend (The Trouble With Twins 1) 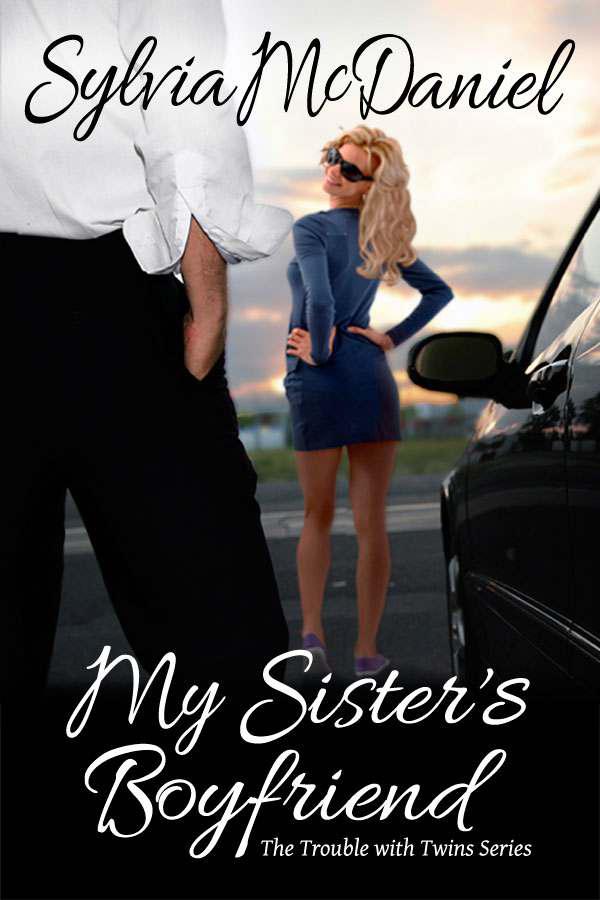 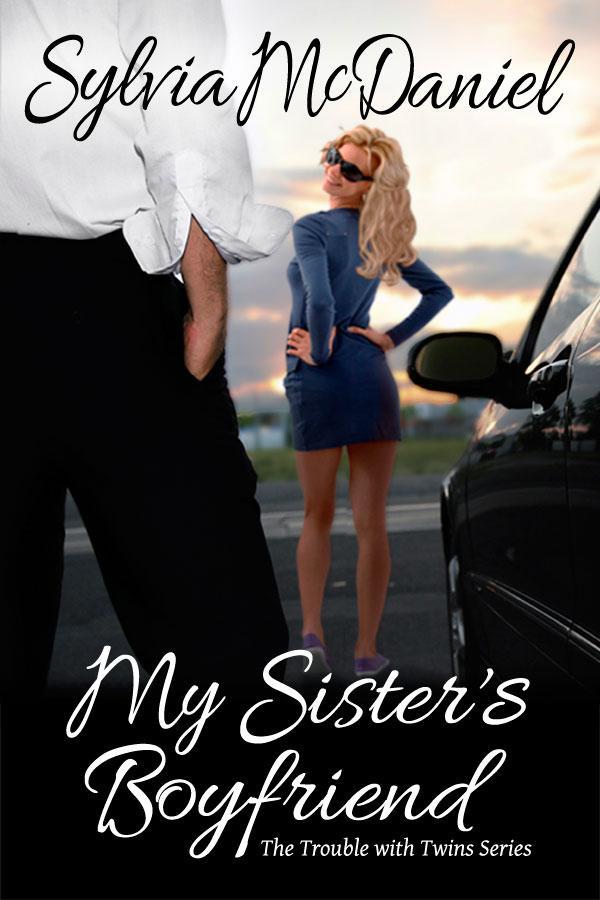 No part of this book may be reproduced, downloaded, transmitted, decompiled, reverse engineered, stored in or introduced to any information storage and retrieval system, in any form, whether electronic or mechanical without the author’s written permission. Scanning, uploading or distribution of this book via the Internet or any other means without permission is prohibited.

"Never again," Jennifer Riley vowed as she stepped into the black-paneled wooden coffin outside the entrance to the Hilton Hotel in downtown Tyler, Texas. Traffic whizzed by on Main Street, some cars slowing at the sight of a woman climbing into a coffin.

Jennifer tugged at her filmy black chiffon dress, trying to cover as much of her exposed cleavage as possible. "No matter how busy Julia gets or how much she pleads, I refuse to do this again. I didn't come back to Tyler to dress up as an over-the-hill sex queen."

Jennifer took a deep breath, dreading the darkness that would engulf her. "Yes, make it quick. I hate lying inside this creepy box."

Jennifer watched the coffin lid come down, shutting out the noise and headlights from the traffic.

"You all right?" Paul asked.

"Hurry!” Her breath sounded harsh in the darkness. She felt the pallbearers lift the coffin onto the cart and roll it along the sidewalk into the hotel.

After tonight, Julia, her twin sister, would have to find someone else to jump out of coffins and sing seductively when she needed help with her business. No ifs, ands, or buts!

As the new Development Director at County General Hospital, Jennifer would be way too busy to fill in at her sister's fledgling singing telegram company. Not to mention that popping out of coffins could be damaging to her career.

The cart jostled along the hallway of the hotel until she heard wolf whistles and loud, boisterous, voices cheering, and she knew they'd arrived at the party.

Paul rapped on the coffin lid. "Are you ready?"

Jennifer cleared her throat and searched for the button that would pop open the door. Whatever happened to women jumping out of cakes? What nut case thought coffins were funny?

The coffin lifted. She gripped the sides, trying to find her balance as the pallbearers slid the casket off the cart until the box stood upright. She landed with a jarring thunk on the floor. Why couldn't you get good pallbearers these days?

Paul tapped on the side of the coffin to let her know it was show time.

"In honor of your birthday, your friends and family have given you a gift from the other side. The other side of the hill, that is," Paul announced as the noise from the crowd swelled.

Music started to play, and Jennifer hit the button on the inside of the wooden box. The lid sprang open and she slinked out, her chiffon dress clinging like a second skin that left little to the imagination.

"Happy Birthday," she sang in her alto voice, her eyes blinded by the lights. She blinked rapidly, hoping her eyesight would adjust to the brightness of the room. When her vision finally cleared, she found herself staring into the face of the one man she'd hoped never to see again.

There before her, wearing a stunned expression on his face and a Marvin the Martian child's birthday hat on his head, sat Brent Moulton.

"Well, I'll be damned," said the captain of her old high school football team, the person voted most handsome and most likely to succeed.

Jennifer's voice cracked as she gazed into the emerald eyes of the boy who'd once been the object of her teenage dreams. A lock of dark hair lay across his high forehead. His full lips smiled as she stumbled over the words to the song she'd sung countless times.

I should never have agreed to do this tonight!

Dancing for a man who, almost fifteen years ago, hadn't known the difference between her and Julia was anything but special, but the show had to go on.

She slinked around him, her heart beating in her throat as she ran her hands along the hard, contoured muscles of his shoulders. Brent must have existed on nothing but Wheaties, because his physique resembled a professional football player's rather than that of a high school kid.

Of course, he would never remember her. She had portrayed Julia that night so long ago when they'd pulled a switch on him. Nevertheless, deep down inside, the foolish young girl Jennifer had been back then had convinced herself that he’d known which twin he was with. Yes, they looked alike, but when someone really knew the two of them, their differences were obvious.

With a coo that she hoped resembled Christina Aguilera’s crooning, she ran her fingers down his cheek as she began the last chorus of the song, the place in the act where she was supposed to lean forward and placed a chaste kiss on his cheek. She gazed at his lips, full and inviting, and remembered the feel of them against her own that moonlit night when he believed he was kissing Julia's lips.

As the song ended, Brent reached up and unexpectedly pulled her onto his lap, wrapping her in his muscular arms. A full-blown explosion of magnetism rushed at Jennifer like a Eurail locomotive as she gazed into his laughing emerald eyes, catching her completely off guard.

Fifteen years had passed since that night, and still he'd tag teamed her libido and brought back all those annoying yearnings she thought she’d buried long ago.

Sprawled across Brent's lap, her bottom rested against his legs, and her head lay against his muscular arm. The memory of his kiss had her heart beating a sharp rhythm against her chest. Hopefully he'd forgotten his date with
Julia
the night before they left for college.

He ran his hand down her arm, leaving a trail of goose bumps beneath the black chiffon sleeve of her dress. "Hi," he said as his gaze swept down the length of her, his voice deeper, sexier than she remembered.

"Hi," she managed as a shiver ran down her spine and her lungs tightened beneath the unyielding black dress.

“It’s been a long time.” The corner of his lips turned up in a cocky grin. "Shouldn't I get some kind of official birthday kiss?"

Determined to control the situation, she placed her hands on his jaw and brought his face close to her lips. She placed a quick, chaste kiss on his cheek. "Happy birthday!"

Immediately she tried to jump off his lap, but his arms tightened around her. "Oh no!"

He flashed the smile that had won him
Most Handsome,
and she swallowed, nervous in his arms.

"That's not exactly what I had in mind," he said, loosening his grip but still holding onto her. "I want a kiss that will make me wish we were eighteen and parked out at Lookout Point again.” He leaned in and whispered in her ear. "You remember the kind we shared in high school…"

Oh God! She was in so much trouble. How could she forget the night he'd permanently imprinted his kiss on her? For the last fifteen years, she'd been searching for an antidote.

The music from the portable player pounded out a tune while the pallbearers who escorted her stood ready to take control of the situation at her signal. But Jennifer stared into green eyes that seemed to reach inside her and heat her insides into molten liquid, leaving her limbs limp as wet noodles. Foolishly, she'd agreed to help Julia tonight. Foolishly, fifteen years ago she'd traded places with her sister and gone out with Brent.

No, she wasn't proud of what she'd done, but she'd never expected her fantasy to come true that night. She had deceived herself into believing that Brent knew who she was, only to realize later that he never comprehended the switch.

Now she feared the feel of his lips on hers would bring disaster, but she couldn't resist the temptation to explore them one more time and end her fifteen years of wondering and searching for what she'd felt that night. Surely this time the fantasy would end and she would be free from his spell.

She wanted to run, but instead her mouth met his halfway. As she breathed in Brent’s scent, his lips covered hers. She dissolved inside, his big hands holding her in his arms while her pheromones did a naked, sexual dance.

The jolt of his lips stroking hers roused her sleeping body from its sexual deprivation and sent her hormones skyrocketing to levels that left her dangerously vulnerable. Just like she was seventeen again.

She sank into his body, needing to feel closer as her mind replayed the memory of that night at Lookout Point on Lake Palestine. The frenzied touches of two awkward kids experiencing desire for the first time, learning about sex.

Cheers broke through the drugging sensation of his lips, and she pushed her hands between her chest and his, breaking them apart. Her breathing sounded ragged to her own ears, and she could feel the heat radiating from her face.

People surrounded them, yet she'd lost herself in the cocoon of his embrace, her mind engrossed in the remembrance of their first kiss.

He smiled, the gesture crooked and endearing. "That was better than I remembered from high school, Julia."

The flames of sexual heat that held her in its grip were doused. She'd become so enraptured by his kiss that she'd let herself get caught up in his embrace, forgetting their history, breaking her promise to herself. After that night she’d sworn to never again impersonate her sister. Only Brent still didn't know that he'd dated Jennifer, not Julia.

She extricated herself from his arms and slid off his lap, feeling the need to escape.

"Hey, where are you going?" he asked, his eyes widening in surprise. "The party is young yet. Stay and have a few drinks with me. We could catch up. Talk about old times."

Jennifer glanced around the room filled with beer-guzzling men who ogled her like a Playboy centerfold. She shuddered. Not her scene.

"I don't think so.” She grabbed the CD player, wanting to put as much distance between her and Brent Moulton as she possibly could. Lord, she was a coward. "Have a great Birthday, Brent."

She turned to leave, but knew she'd regret her cowardly actions later. She wasn’t the same wimpy high school kid any longer. Determined not to let the past eclipse her return to Tyler or live in her sister's shadow a moment longer, she wheeled around to face Brent.