Read A Time of Shadows (Out of Time #8) Online 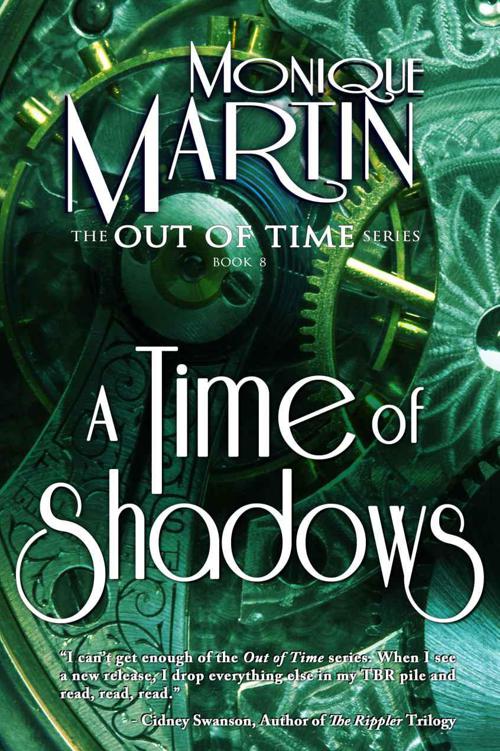 Other Books & About the Author

A Time of Shadows

It's been a few months since Simon and Elizabeth returned from their adventure in 1888 London. Jack is back with them and all is as it should be, until a knock on the door changes that. A visitor from the future turns their world upside-down.

Unable to return her to her time, they go to the Council for help, only to discover there are bigger problems afoot. All of the watches have been shut down until a dangerous and secret weapon--a watch that can change any point in time--can be found. Too powerful for anyone to possess, it was hidden. But now the secret's out, and the mysterious Shadow Council will do anything to get their hands on it.

Simon, Elizabeth and Jack race to find it before the Shadow Council does or it will be the end of...everything.

This book is a work of fiction. Names, characters, places and incidents either are the product of the author's imagination or are used fictitiously. Any resemblance to actual persons, living or dead, is entirely coincidental.

All rights reserved. No part of this publication may be reproduced or transmitted in any form or by any means, electronic or mechanical, without written permission.

This book would not have been possible without the help of many people. I’d like to thank Robin for going above and beyond and then back again, my mom and George, my dad and Anne, Michael, Eddie and Carole, and Cidney, Cynthia, Laura, Sarah and The Diaspora.

S
IMON
LEANED
BACK
IN
his chair and enjoyed the view. His wife had lost a shoe and was presently crawling around the bedroom floor looking for it.

Elizabeth lifted the bed skirt and stuck her head under the bed. “Are you sure you haven’t seen it?”

“Are you asking me or the monster beneath the bed?”

She pulled her head back and shot him a narrow-eyed glance before continuing her search. “Considering what we’ve seen, that’s not all that funny.”

“The shoe. You were the one who kicked it off like a Rockette last night. Nearly took out the lamp,” he said as he watched her backside wiggle. He stretched his neck for a better view. “I like that lamp.”

She
humphed
and wriggled a little further under the bed and then cried out in victory. All the movements reversed and she reappeared, auburn curls disheveled but her expression triumphant. “Veni, vidi, vici.”

Then she turned her attention to the heel she held in her right hand. “You’ll have to do better than that,” she scolded it before sitting on the bed and slipping it on.

Simon smiled. All was right with the world. He and Elizabeth had returned from their adventure in 1888 London two months ago battered and bruised, but the wounds had faded, and the timeline seemed secure again. Jack Wells had returned to the present, confused but unharmed and had been waiting for them at Council headquarters when they’d returned. Currently, Victor Renaud was off chasing after Jack the Ripper, and Simon had no doubt he would find him. Eventually. But not soon enough for his taste.

As quickly as the sense of contentment had arrived, it was replaced with the uneasiness he had come to believe was his natural state. Not that he didn’t have reason. Jack the Ripper knew who they were and was out there, somewhere. That would give anyone pause. He had faith in Renaud though, despite his being French, and that was some comfort. His disquiet wasn’t because of any of that, however. The source was, sadly, not difficult to pinpoint.

His discomfort came from the simple fact that he felt content. The universe had a way of pulling the carpet out from under his feet on a regular basis. He was hardly superstitious, but he had a strange sensation that the next troubling event was coming soon.

Simon shook his head and stood. She knew him so well. “Nothing. Is that a new dress?” he asked, knowing it was.

She smiled and stood to give him a better view. “It is. Do you like it?”

Closing the distance between them, he pulled her into his arms. He gazed down at her and let himself relax. She was by far the best tonic ever invented.

He leaned down and kissed her. When they broke apart she smiled up at him and wiped away the lipstick she’d left behind. He grasped her hand and kissed her palm.

The way she smiled at him made his chest tight.

“Is it too late to call Wells and reschedule?” he asked, not wanting to share her tonight.

“Tempting,” she said, and Simon felt his hopes begin to deflate. “But,” she added as she slipped from his embrace, “I think we should go. Something’s going on with him.”

Simon tried to remember the latest in a long line of conquests. “Melanie?”

Simon paused. “We are talking about Jack Wells?”

Elizabeth ignored his jibe and dug into her jewelry box and pulled out a pair of earrings. “I’m serious. I get the feeling he’s got something he wants to ask us.”

Elizabeth cocked her head to the side and stopped fiddling with her earring. “I don’t know.”

“If it’s money,” Simon said, “he doesn’t need to fall down on bended knee. Just find out what he needs and I’ll have it transferred.”

He knew Jack was bothered that he’d occasionally had to borrow money to make ends meet. For a man whose skills were seventy years out of date, he was doing remarkably well, actually.

Elizabeth nodded thoughtfully and then gazed at herself in the vanity mirror. She made a face and took off the earrings she’d just put on. “I hope it’s that, but I thought he was doing pretty well with the off-the-books PI stuff.”

Simon’s reply was interrupted by the doorbell. “I suppose we’ll find out sooner rather than later.”

“Would you…?” Elizabeth asked, waving her hand in the general direction of the door.

He checked his watch as he hit the bottom step. Twenty minutes early. That wasn’t like Wells. He was always precisely on time. It was perhaps his best feature.

Simon opened the door, about say so, but Wells wasn’t there. No one was, or at least that’s what Simon thought for a fleeting moment until his eyes drifted downward and he saw a pretty, young girl standing there staring up at him. Her small face was pinched and her eyes were large.

They both seemed surprised, although he had no idea why she would be. Before he could ask, she threw herself into him, wrapping her arms around his waist.

Simon staggered back half a step in shock and stood in stunned silence for a moment.

He looked down, but all he could see was a pile of brown curls.

“What’s wrong?” he asked as he tried to peel her arms away.

But the girl simply sobbed into his shirt.

Good God, what was happening? There weren’t any new families in the neighborhood. He wasn’t exactly chummy with his neighbors, but Elizabeth knew them well enough to know what was happening in the community. And as far as he knew, nothing had.

He tried once more to separate her from him, but she held on. Tighter if that was possible.

When she didn’t answer, he scanned the darkening and empty street again. He didn’t see anything or anyone that was out of place.

“Is someone trying to hurt you?”

She sniffled loudly against him and mumbled something he couldn’t understand. He stood there like a complete idiot for a moment longer before doing the only thing he could think of.

Whatever Elizabeth had been expecting to see when she came downstairs, Simon trying to pry a child from him wasn’t one of them.

“What on earth?” she said as she hurried to his side.

He looked at her helplessly.

Elizabeth bent down so she was close to the girl’s height. The poor little thing was shaking in Simon’s arms, clearly frightened.

She couldn’t have been more than nine or ten years old, and while it wasn’t terribly odd that a child her age might be out alone, their street wasn’t exactly crawling with children. Maybe a neighbor had a grandchild visiting? Elizabeth looked up at Simon for an explanation he didn’t have. He shook his head and spread his arms.

Or was it something far more nefarious than that? Things were seldom simple in her life anymore. Elizabeth suddenly felt a little exposed standing there with the door open.

She put a hand gently on the girl’s back and felt her trembling. “Let’s get you inside, all right?”

The girl lifted her face from its place buried in Simon’s waist and looked at her. Her green eyes went wide with surprise and some emotion Elizabeth couldn’t decipher.

The girl sniffed once and then nodded.

“Good,” Elizabeth said and led her inside, casting a worried glance over her shoulder at Simon. He shrugged, clearly at as much a loss as she was. Behind them, Simon closed the door and she heard the deadbolt slide into place.

The girl hesitated at the edge of the living room. She looked around it carefully, before casting a worried look at Elizabeth.

The girl’s chin wobbled, but she pressed her lips together and nodded.

Elizabeth led her over to the sofa and they sat down. Simon strode toward the passthrough into the kitchen to grab the phone.

The girl looked almost surprised at the question, then she nodded. Her little forehead creased in thought for a moment before she looked at Elizabeth again.

A
STRANGE
SENSATION
bubbled up inside Elizabeth’s stomach and then her heart lurched forward as the name sank in.

Elizabeth swallowed the knot in her throat and tried not to lose the plot. Charlotte was a popular enough name. There were thousands of girls who had it. It was a strange coincidence, but only that. Nothing more.

But that certainty wasn’t really a certainty at all and it evaporated as Charlotte lifted her left hand from her lap and turned it over so Elizabeth could see gold etching peeking out between the tight clench of her fingers. Despite herself, Elizabeth leaned slightly away.

“Simon,” she said. She could hear him swearing at the phone as he was put on hold at the police station. But she was unable to pull her gaze away from what she feared was in the girl’s grip.

Slowly, Charlotte uncurled her fingers and in the palm of her hand rested an antique pocket watch.

After a moment’s shock, Elizabeth gingerly lifted it from Charlotte’s hand and put it in her own. The familiar weight and sensation sent a chill down her spine. She turned the watch over.

“Simon, hang up the phone.”

“God forbid someone should need actual help,” Simon said to no one in particular.

“Simon!” Elizabeth said, urgently this time and getting Simon’s attention. She held up the watch.