Read A Trick of the Light Online

A Trick of the Light 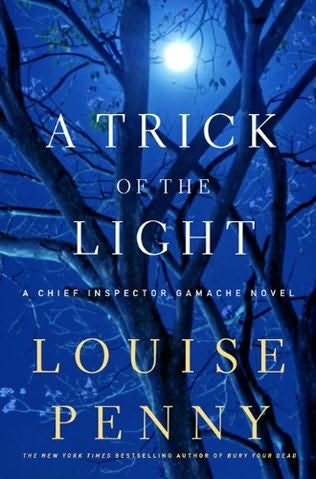 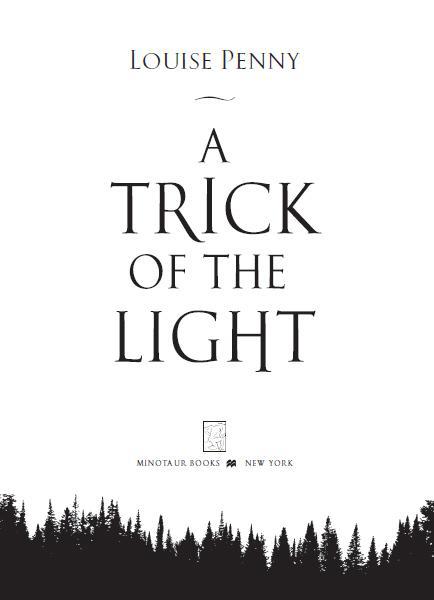 For Sharon, Margaret, Louise and all the wonderful women who helped me find a quiet place in the bright sunshine

Many people were whispering in my ear as I wrote
A Trick of the Light.
Some still in my life, some now gone but always remembered.

I won’t go on at length, except to say I’m deeply grateful I got a chance to write this book. But much more than that, I’m deeply grateful, after many years as a resister, I now completely believe that sometimes drowning men (and women) are saved. And, when coughed back, might even find some measure of peace in a small village. In the sunshine.

Thank you to my husband and partner and soulmate, Michael. For also believing those things. And believing in me. As I believe in him.

Thank you to Hope Dellon, my brilliant editor at Minotaur Books, who is perfectly named. Her remarkable gifts as an editor are only surpassed by her gifts as a person. For Dan Mallory, my dazzling editor at Little, Brown, who has jets on his heels and has taken me along on a giddy and thrilling ride with one of the bright lights of publishing. I have him in my death-grip.

Thank you to Teresa Chris, my amazing agent, who has crossed that border and become a friend. For guiding this book, and my career, with such a sure and gracious hand.

One thing that has surprised me about a writing career is the mountain of detail involved. Permissions, mailings, accounting, ordering supplies, and simply organizing everything so important things, like the tour schedule, don’t get lost. I’m frankly terrible at those sorts of things. Happily the fabulous Lise Desrosiers is as disciplined and organized as I am slothful. In looking after those elements of my life Lise has freed me up to write. We make a great team and I want to thank Lise deeply not only for her hard work but her unfailing optimism and good humor.

I hope you enjoy reading
A Trick of the Light.
It took several lifetimes to write.

Oh, no, no, no,
thought Clara Morrow as she walked toward the closed doors.

She could see shadows, shapes, like wraiths moving back and forth, back and forth across the frosted glass. Appearing and disappearing. Distorted, but still human.

Still the dead one lay moaning.

The words had been going through her head all day, appearing and disappearing. A poem, half remembered. Words floating to the surface, then going under. The body of the poem beyond her grasp.

What was the rest of it?

The blurred figures at the far end of the long corridor seemed almost liquid, or smoke. There, but insubstantial. Fleeting. Fleeing.

As she wished she could.

This was it. The end of the journey. Not just that day’s journey as she and her husband, Peter, had driven from their little Québec village into the Musée d’Art Contemporain in Montréal, a place they knew well. Intimately. How often had they come to the MAC to marvel at some new exhibition? To support a friend, a fellow artist? Or to just sit quietly in the middle of the sleek gallery, in the middle of a weekday, when the rest of the city was at work?

Art was their work. But it was more than that. It had to be. Otherwise, why put up with all those years of solitude? Of failure? Of silence from a baffled and even bemused art world?

She and Peter had worked away, every day, in their small studios in their small village, leading their tiny lives. Happy. But still yearning for more.

This was the “more.” Through those doors. Finally. The end point of everything she’d worked toward, walked toward, all her life.

Her first dream as a child, her last dream that morning, almost fifty years later, was at the far end of the hard white hallway.

They’d both expected Peter would be the first through those doors. He was by far the more successful artist, with his exquisite studies of life in close-up. So detailed, and so close that a piece of the natural world appeared distorted and abstract. Unrecognizable. Peter took what was natural and made it appear unnatural.

People ate it up. Thank God. It kept food on the table and the wolves, while constantly circling their little home in Three Pines, were kept from the door. Thanks to Peter and his art.

Clara glanced at him walking slightly ahead of her, a smile on his handsome face. She knew most people, on first meeting them, never took her for his wife. Instead they assumed some slim executive with a white wine in her elegant hand was his mate. An example of natural selection. Of like moving to like.

The distinguished artist with the head of graying hair and noble features could not possibly have chosen the woman with the beer in her boxing glove hands. And the pâté in her frizzy hair. And the studio full of sculptures made out of old tractor parts and paintings of cabbages with wings.

No. Peter Morrow could not have chosen her. That would have been unnatural.

And yet he had.

And she had chosen him.

Clara would have smiled had she not been fairly certain she was about to throw up.

Oh, no no no,
she thought again as she watched Peter march purposefully toward the closed door and the art wraiths waiting to pass judgment. On her.

Clara’s hands grew cold and numb as she moved slowly forward, propelled by an undeniable force, a rude mix of excitement and terror. She wanted to rush toward the doors, yank them open and yell, “Here I am!”

But mostly she wanted to turn and flee, to hide.

She’d given the wrong answer. She’d said yes. And this is where it led.

Someone had lied. Or hadn’t told the whole truth. In her dream, her only dream, played over and over since childhood, she had a solo show at the Musée d’Art Contemporain. She walked down this corridor. Composed and collected. Beautiful and slim. Witty and popular.

Into the waiting arms of an adoring world.

There was no terror. No nausea. No creatures glimpsed through the frosted glass, waiting to devour her. Dissect her. Diminish her, and her creations.

Someone had lied. Had not told her something else might be waiting.

Oh, no no no,
thought Clara.
Still the dead one lay moaning.

What was the rest of the poem? Why did it elude her?

Now, within feet of the end of her journey all she wanted to do was run away home to Three Pines. To open the wooden gate. To race up the path lined with apple trees in spring bloom. To slam their front door shut behind her. To lean against it. To lock it. To press her body against it, and keep the world out.

Now, too late, she knew who’d lied to her.

Clara’s heart threw itself against her ribs, like something caged and terrified and desperate to escape. She realized she was holding her breath and wondered for how long. To make up for it she started breathing rapidly.

Peter was talking but his voice was muffled, far away. Drowned out by the shrieking in her head, and the pounding in her chest.

And the noise building behind the doors. As they got closer.

“This’s going to be fun,” said Peter, with a reassuring smile.

Clara opened her hand and dropped her purse. It fell with a plop to the floor, since it was all but empty, containing simply a breath mint and the tiny paint brush from the first paint-by-number set her grandmother had given her.

Clara dropped to her knees, pretending to gather up invisible items and stuff them into her clutch. She lowered her head, trying to catch her breath, and wondered if she was about to pass out.

Clara stared from the purse on the gleaming marble floor to the man crouched across from her.

Instead, she saw her friend and neighbor from Three Pines, Olivier Brulé. He was kneeling beside her, watching, his kind eyes life preservers thrown to a drowning woman. She held them.

She took a deep breath in.

“I don’t think I can do it.” Clara leaned forward, feeling faint. She could feel the walls closing in, and see Peter’s polished black leather shoes on the floor ahead. Where he’d finally stopped. Not missing her right away. Not noticing his wife was kneeling on the floor.

“I know,” whispered Olivier. “But I also know you. Whether it’s on your knees or on your feet, you’re going through that door.” He nodded toward the end of the hall, his eyes never leaving hers. “It might as well be on your feet.”

“But it’s not too late.” Clara searched his face. Seeing his silky blond hair, and the lines only visible very close up. More lines than a thirty-eight-year-old man should have. “I could leave. Go back home.”

Olivier’s kindly face disappeared and she saw again her garden, as she’d seen it that morning, the mist not yet burned off. The dew heavy under her rubber boots. The early roses and late peonies damp and fragrant. She’d sat on the wooden bench in their backyard, with her morning coffee, and she’d thought about the day ahead.

Not once had she imagined herself collapsed on the floor. In terror. Longing to leave. To go back to the garden.

But Olivier was right. She wouldn’t return. Not yet.

Oh, no no no.
She’d have to go through those doors. They were the only way home now.

“Deep breath out,” Olivier whispered, with a smile.

“What’re you two doing down there?” Gabri asked as he watched Clara and his partner. “I know what Olivier usually does in that position and I hope that isn’t it.” He turned to Peter. “Though that might explain the laughter.”

“Ready?” Olivier handed Clara her purse and they got to their feet.