A Weird Case of Super-Goo 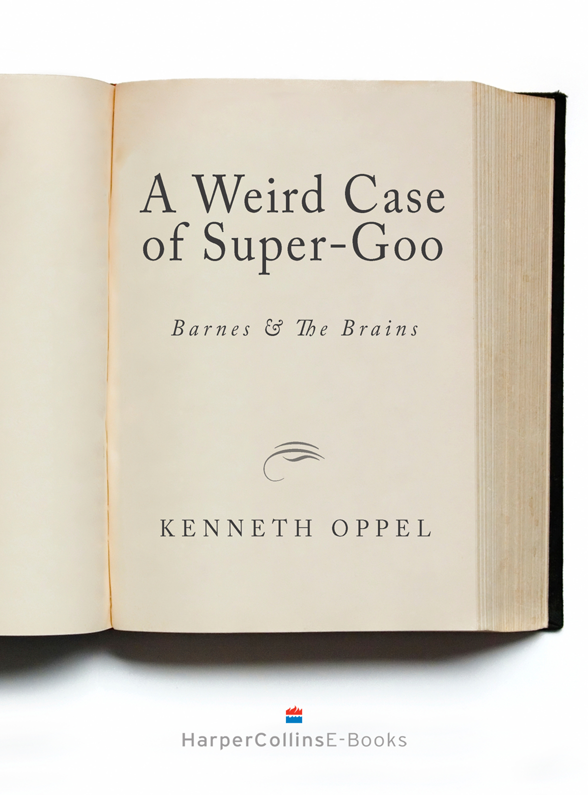 A Weird Case of Super-Goo
Barnes & The Brains
Kenneth Oppel

Have you read all of the Barnes & the Brains adventures?

“Now, Barnes,” said Tina, “there’s no need to get so worked up. It’s just a small glitch.”

“Look at my hair!
Look
at it! It’s bright orange! That’s not what I would call a small glitch!”

Giles turned back to the mirror and stared at himself in horror. How stupid, he thought angrily. Why had he volunteered to test Tina’s latest invention? He glared at the smoking metal helmet which, until a few seconds ago, had been fastened to his head. Tina called it the Brain Drainer. The helmet bristled with all sorts of lights and dials, and sprouted bundles of wires which trailed across the basement floor to a small radio.

But it didn’t work out like that. In fact, it didn’t work at all. Giles had sat in a chair for over half an hour, concentrating so hard he got a headache and a crick in his neck. The radio sat, silent, at the other end of the workshop.

“I’m trying, I’m trying!” said Giles through gritted teeth. The helmet on his head was starting to overheat.

“No thank you, Kevin. At least Barnes
has
a brain.”

When the helmet began to buzz and smoke, Giles angrily snatched it off his head.

“That’s it! See, it doesn’t work. Nothing happened!”

But something
had
happened.

His hair had turned bright orange.

“It’s not so bad, Barnes—really,” said Kevin, who was trying very hard not to laugh. “I mean, orange is a great colour. Lots of kids at school would love to have orange hair.”

Suddenly both Kevin and Tina were laughing uncontrollably, eyes screwed shut, doubled over.

“I just quit the genius business,” Giles shouted as he walked into his house, slamming the door behind him. “Mom? Dad?”

“In here,” came his father’s voice from the living room.

Giles turned down the hall and stopped in the doorway, waiting for his parents to notice his hair. Mr and Mrs Barnes were sitting side by side on the sofa. They looked like they’d been sitting there for quite some time. Mrs
Barnes cradled a mug of tea in her hands and was staring blankly out the window.

Giles frowned in amazement. “Haven’t you noticed anything unusual about me?” he said. “Anything different about…my hair, maybe?”

Giles knew that something must be wrong.

“Is everything okay?” he said worriedly. “Is someone sick?”

“No, no,” said Mr Barnes. “Your mother’s had a bit of a shock. She just got a call from your Aunt Lillian. She’s coming to stay.”

Aunt Lillian was a supernatural specialist. She told fortunes, read palms, interpreted tarot cards, and made astrological predictions. She was an expert on ghosts, goblins, and ghouls.

She was Mrs Barnes’s younger sister—and no matter what his Mom said about Aunt Lillian, Giles liked her. He liked the way she dressed, with scarves and headbands and too much makeup on her cheeks and eyes. He liked the ghost stories she always told. He liked the dramatic way she talked and did things, like reciting old poetry and flambéing vegetables for dinner. The only thing he didn’t like about Aunt Lillian was her smoking. She smoked the stinkiest cigarettes he’d ever smelled.

“How long is she staying?” Giles asked, trying not to seem too enthusiastic.

“About two w-w-weeks,” his mother stuttered. She turned to Giles’s father. “I don’t know if I’m going to make it.”

“It’ll be fine, Elizabeth,” said Mr Barnes. “You’ll be working at the university most days, and in the evenings we’ll all be here to help you cope with her.”

Mrs Barnes nodded silently, taking quick, desperate sips of her tea. Giles knew that Aunt Lillian drove her crazy. It went way back to when they were kids. Mom said she always had to take care of Lillian, clean up after her, and get her out of trouble. Whenever she did something messy or bad—which was almost every day, and sometimes twice—Giles’s Mom usually ended up taking the blame. According to her, she had been the most overworked babysitter in the world.

Giles had heard all sorts of fabulous stories about Aunt Lillian’s crimes—from almost setting fire to the cats, to painting her whole body pink. When she was
older she had sleep-over parties where she held séances and talked to the spirits of long-dead gangsters, scaring some of the girls so badly that their parents had to come in the middle of the night and take them home.

“I didn’t quite catch the reason,” said Mr Barnes. “Something about her apartment needing spraying, I think.”

Giles was glad Aunt Lillian was coming—so glad that he’d almost forgotten his orange hair. Those rotten Quarks! Well, with his aunt here, he wouldn’t even notice that Tina and Kevin were gone from his life. Who needed them?

A car pulled up outside the house with a fanfare of honking.

“I hate it when she does that,” said Mrs Barnes through clenched teeth.

“Try to stay calm,” Mr Barnes told his wife. “It’ll be much easier if you stay calm.”

“All right,” she said, getting up and walking to the door like a zombie.

Giles’s Mom smiled, and Giles could practically hear her mouth cracking as she stretched it into a big, friendly, fake smile. She looked like a demented clown.

Before Mom could even put her hand on the knob, the front door flew open, and Aunt Lillian burst in.

Giles was swept up into her arms and smothered with her perfume. Both of his cheeks were smacked with kisses, and then Aunt Lillian held him at arm’s length and looked him over.

“It was an accident.”

“Oh, yes. Orange hair suits you. It goes with your skin tone. And your astrological sign, of course. Scorpio, right?”

“Why don’t you come in and have a cup of tea, Lillian,” said Mrs Barnes. “Giles and Matt will get your luggage.”

They all went out to the car, which was crammed with suitcases and cardboard boxes.

“What is all that?” exclaimed Mrs Barnes.

“What’s in all those boxes, Lillian?”

“Herbs, spices, roots, and berries—oh, I’d better take that one,” she said to Giles, as he reached for a small wooden box. “It’s a bit fragile—full of glassware, you know.”

Giles caught a glimpse of several bottles—one filled with brightly-coloured liquid, the other with green and purple powders, and a third with what looked like tiny eyeballs.

After they’d unloaded the car and taken all of Aunt Lillian’s things up to the spare bedroom, they sat around the living room, talking.

“This is really so nice of you,” she said. “There was just no way around it, though. My apartment had to be sprayed.”

“No, no,” she laughed. “Not bugs. Spirits. Ghouls. The odd demon or two. They’re everywhere. I’ve called in the supernatural exterminator. He should have them cleared out in no time.”

“But where did they come from?” Giles asked.

“Oh, you know, the usual places. A few probably followed me home from the occult bookstore. Others might have jumped out of a graveyard or some dusty old magic book.” She threw her hands up into the air. “These things happen.”

“Well, we had ghosts once,” Giles pointed out.

“Yes, well, that had nothing to do with us,” said Mrs Barnes indignantly. She did not like to be reminded of the ghost incident. “The house was haunted when we moved in, that’s all. We were never told about it.”

“Really?” said Aunt Lillian, her face all lit up. “Oh, I’d love to hear all about it.” She looked at Giles. “Maybe you can fill me in later.”

“Well, it’s been a little slow…To be honest, I’m out of work. There’s not as much demand for horoscopes as there used to be. Everyone’s into crystals and aromatherapy these days. But—” and her face broke into a mysterious smile—“I have been working on a little something of my own, on the side.”

“A new wrinkle cream,” she said. “I’m just putting the finishing touches on the recipe.”

“You invented it yourself?” Giles said.

“Well, I’ve taken bits from here and there. I brought my equipment with me so I wouldn’t lose any time. That’s why I have so much luggage. I thought maybe you could lend me a hand, if you had some free time after school.”

“Um, Lillian,” said Mrs Barnes warily, “there’s no weird hocus pocus involved in this new wrinkle cream of yours, is there?”