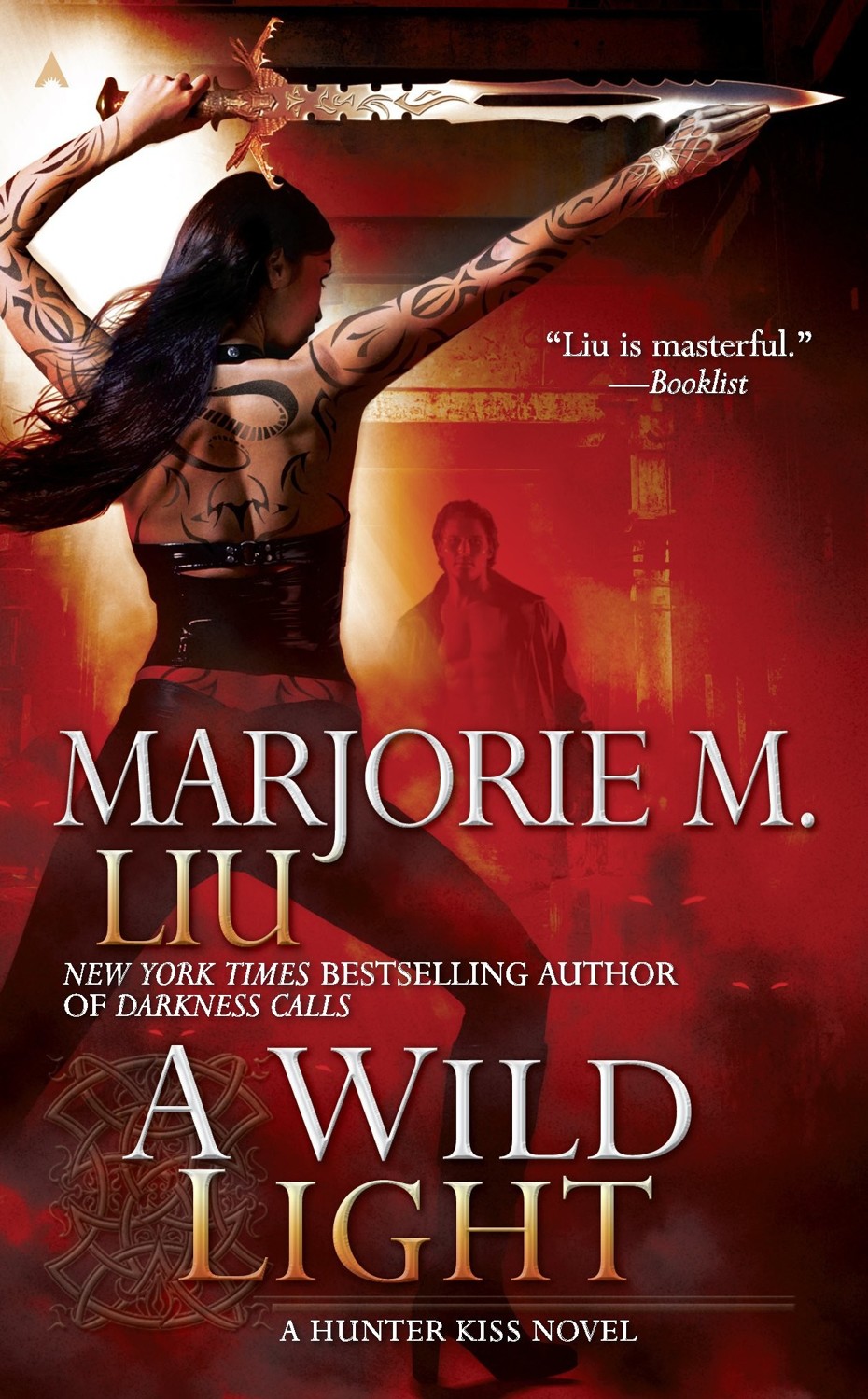 Table of Contents
Title Page
Copyright Page
Dedication
Acknowledgements
Epigraph
CHAPTER 1
CHAPTER 2
CHAPTER 3
CHAPTER 4
CHAPTER 5
CHAPTER 6
CHAPTER 7
CHAPTER 8
CHAPTER 9
CHAPTER 10
CHAPTER 11
CHAPTER 12
CHAPTER 13
CHAPTER 14
CHAPTER 15
CHAPTER 16
CHAPTER 17
CHAPTER 18
CHAPTER 19
CHAPTER 20
CHAPTER 21
PRAISE FOR THE HUNTER KISS NOVELS BY “RED-HOT LIU”
1
DARKNESS CALLS
“[Liu’s] ability to deliver kick-butt action and characters whose humanity resonates, even when they’re anything but human, is a testament to her outstanding storytelling skills. Liu’s imagination is an amazing place to visit.”
—Romantic Times
(Top Pick)
“
Darkness Calls
is one riveting book, and Marjorie Liu is one great writer. The desperation Maxine feels as she deals with her past and unknown future is one that will keep you reading and anxious for the next terror Maxine will have to endure.”
—Fresh Fiction
“Liu has done an excellent job of developing and expanding the mythos she created in
The Iron Hunt
. . . I look forward to reading the further adventures of Maxine Kiss.”
—SFRevu
THE IRON HUNT
“I adore the Hunter Kiss series! Marjorie Liu’s writing is both lyrical and action packed, which is a very rare combination. Heroine Maxine Kiss and her demon friends are wonderful characters who are as likable as they are fierce. You’ll want to read this series over and over.”
—Angela Knight,
New York Times
bestselling author
“Liu is one of the best new voices in paranormal fiction.”
—Publishers Weekly
“Marjorie M. Liu writes a gripping supernatural thriller.”
—The Best Reviews
“From the imagination of one of today’s most talented authors comes a mesmerizing, darkly disturbing world on the brink of apocalypse. With her new Hunter Kiss series, Liu has created a uniquely tough yet vulnerable heroine in Maxine Kiss . . . Through Maxine’s eyes, readers take a heart-stopping ride where buried secrets could change the fate of the world.”
—Romantic Times
“Readers who love urban fantasies like those of Charlaine Harris or Kim Harrison will relish Marjorie M. Liu’s excellent adventure. This is the superb start of a dynamic-looking saga.”
—Midwest Book Review
“Ms. Liu does a lovely job in . . . preparing us for the highspeed action in her demon- filled adventure. A creative and well-written story line provides a strong backbone for this new urban fantasy series, and the unique characters in
The Iron Hunt
will charm, tempt, and surprise readers into coming back for more.”
—Darque Reviews
“A stunning new series . . . The mythology is fascinating, the characters complicated, the story lines original. I’m a big fan of Liu’s Dirk & Steele series, but this one surpasses even it.”
—Fresh Fiction
“An incredibly complex, engrossing story that will stretch your imagination and broaden your ideas of what is and what could be.”
—Romance Junkies
“Marjorie Liu seems to have an endless imagination for creating new and interesting characters and stories. I can’t wait to see how this story develops and the world of Maxine Kiss evolves. This is a character and a story that has potential to keep the reader interested for an extensive series of books.”
—Affaire de Coeur
MORE PRAISE FOR THE NOVELS OF MARJORIE M. LIU
“Raises the bar for all others competing in its league . . . Liu’s screenplay-worthy dialogue, vivid action, and gift for the punchy, unexpected metaphor rocket her tale high above the pack. Readers of early Laurell K. Hamilton, Charlaine Harris, and the best thrillers out there should try Liu now and catch a rising star.”
—Publishers Weekly
(starred review)
“The boundlessness of Liu’s imagination never ceases to amaze; her ability to translate that imagination into a lyrical work of art never ceases to impress.”
—Booklist
(starred review)
“Red-hot Liu . . . packs her stories with immensely intriguing characters, making the high-stakes plotlines even more mesmerizing.”
—Romantic Times
(Top Pick, 4½ stars)
“Nonstop adventure . . . a rich world with paranormal elements.”
—SFRevu
“A wonderful voice.”
—Romance at Heart Magazine
“Liu is masterful in merging espionage, romance, and the supernatural into fiction that goes beyond the boundaries of action-adventure romance or romantic suspense.”
—Booklist
“Fabulous romantic suspense fantasy that will hook the audience from the first note to the incredible climatic coda.”
—Midwest Book Review
Ace Books by Marjorie M. Liu
THE IRON HUNT
DARKNESS CALLS
A WILD LIGHT
eSpecials
HUNTER KISS
Anthologies
WILD THING
(with Maggie Shayne, Alyssa Day, and Meljean Brook)
NEVER AFTER
(with Laurell K. Hamilton, Yasmine Galenorn, and Sharon Shinn)
INKED
(with Karen Chance, Yasmine Galenorn, and Eileen Wilks)

To the families we love, whether born to or made
ACKNOWLEDGMENTS
Many thanks to: my lovely editor, Kate Seaver; my fantastic agent, Lucienne Diver; all the wonderful people at Berkley; and my great copy editors, Bob and Sara Schwager.
And hail their queen, fair regent of the night.
—ERASMUS DARWIN
I will vanish in the morning light;
I was only an invention of darkness.
—ANGELA CARTER
CHAPTER 1
I
T was my birthday, the anniversary of my mother’s murder, and on the way to the party, I made a special point to stop and kill a zombie.
I did it every year. My secret. Only Zee and the boys knew. Our gift to each other.
Sun had been down for only an hour, but this was Seattle, the skies were black as midnight, and the rain pounded the windshield like each drop was trying to break the glass. Cyndi Lauper played on the radio, softly, because I wanted to hear Dek and Mal sing along. “True Colors,” one of my mother’s favorites.
The little demons were coiled around my shoulders, heavy and warm, their breath hot against my ears as they hummed the song in their high, sweet voices. Aaz and Raw sat in the backseat, uncharacteristically quiet, their little legs dangling over the floor as they clutched half-eaten teddy bears against their scaled, muscular chests.
Zee crouched in the passenger seat. Razor- sharp spines of black hair flexed against his chiseled skull, and his eyes glinted red. His claws flexed, in and out, in and out, and every few minutes, he raked his arms in quiet agitation. He was difficult to see, even seated beside me. All of them were. Blending with the shadows, falling into shadows, except for the silver glint of veins and their burning eyes.
“Left,” Zee rasped. I didn’t question his instincts. I turned at the intersection. We were in the south end of Lake Union, near the park. I pulled into the lot near the armory. The boys were gone before I turned off the engine, disappearing into the shadows like ghosts. Only Dek and Mal stayed, heavy and reassuring around my throat. Little bodyguards.
The downpour did not ease. I didn’t worry about it. Less visibility was a good thing.
I only had to wait ten minutes. Zee poked his head out from beneath the dashboard. He didn’t have to say a word. I got out, hunching down, as the rain slammed me. Cold as ice. My gloves were already off. I looked down, once, at the armor hugging my right hand: organic metal, quicksilver as mercury, embedded in the skin of my fingers and wrist, connected by threads that traveled over the back of my pale hand.

Man of the World: The Further Endeavors of Bill Clinton by Joe Conason
A Storm in the Desert: Dragonlinked Chronicles Voume 3 by Adolfo Garza Jr.
Happily Ever After? (Sleeping Handsome Sequel) by Jean Haus
Daniel's Desire by Sherryl Woods, Sherryl Woods
Family Wanted (Willow's Haven Book 1) by Renee Andrews
To the Spring Equinox and Beyond by Natsume, Soseki
Fearless by O'Guinn, Chris
Room for Love by Andrea Meyer
Ten Years Later by Alexandre Dumas
The API of the Gods by Matthew Schmidt