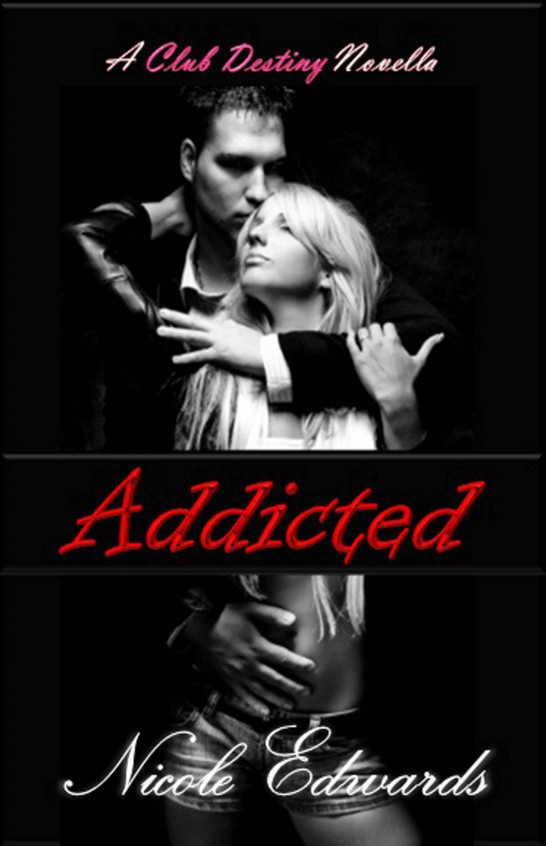 Addiction – A Club
Destiny Novella
is a work of fiction. Names,
characters, businesses, places, events and incidents are either the products of
the author’s imagination or used in a fictitious manner. Any resemblance to
actual persons, living or dead, or actual events is purely coincidental.

This book may not be resold or
redistributed without the express consent of the author.

“So
let me get this straight.” Sam trailed her fingernail down the center of
Logan’s chest, enjoying the way his breath caught when she went just past his sexy
as hell belly button. “You want to bring another man into our bed.”

Trailing
her finger back up, through the soft, dark hair spattered on his chest, she
veered to the right and let her nail scrape gently over his nipple.

“That’s
what I’m saying.” He confirmed although he didn’t sound nearly as confident as
Sam was used to.

This
was the man who had ordered her pleasure back when Logan included his twin
brother Luke in their little soirees. Since Luke had to go off and fall in
love, Sam and Logan had shared some intimate conversations about who they might
be able to invite to join them in the future, but had yet to venture past the talking
point. Tonight she’d been the one to bring it up.

“And
you’ve already selected someone?” She asked as she maneuvered her body so she
was leaning on one elbow while still teasing him with her hand.

This
time when she trailed down his chest, she dipped her finger into his navel
before exploring a little lower, her hand brushing ever so slightly against the
swollen head of his penis.

“Sam.”
Logan’s voice had lowered an octave or two in warning, but Sam didn’t mind.
This was what she lived for.

“Yes?”
She asked innocently, turning her palm against the mushroomed head and wiping
the moisture from the tip.

Sitting
up fully, Sam took it upon herself to remove the t-shirt she was wearing,
swiftly slipping it over her head and tossing it to the floor.

“You
were telling me about this man you were going to invite. Is he as hot as you
are?” She asked, not actually caring but doing her best to get her husband
worked up.

“I
couldn’t tell you that.” Logan sucked in a breath when she wrapped her hand
around his shaft, the feel of satin coated steel beneath her palm.

“Sure
you can.” She said as she glided her hand up and then down, barely gripping
him. He liked when she teased him, and more importantly, Sam liked what came
after.

It
might have taken her longer than was necessary to end up in Logan’s bed permanently,
but since the moment she said, “I do”, she’d thrown caution to the wind.
Despite the fact that they didn’t have any more rendezvous with another man,
the sex was still off the charts explosive as far as she was concerned.

Leaning
over, Sam straddled Logan’s hips, letting her bare breasts brush against the
silky hair on his chest, her nipples puckering from the sensation. Rubbing
against him had become one of her favorite pastimes, and quite frankly, she’d
begun to wonder if she was a cat in another life.

“Tell
me, Logan.” Sam encouraged as she scooted further up his body – not down like
he would have preferred – until she was straddling his chest and her breasts
were inches from his mouth.

Lowering
one sensitive tip to his lips, she locked her eyes with his, loving how the
hazel depths swirled with uncontrolled hunger. When he latched onto her breast
with his mouth, it was her turn to suck in air while her body caught fire.

“Oh
God!” It was too good. The feel of his mouth, his tongue swirling around her
nipple before sucking harder than she would have thought she liked. “So good.”

Sam
had learned all of the things her husband liked over the last few months, and
she knew how much he enjoyed when she gave him a verbal play by play of how he
made her feel.

“Suck
harder.” She encouraged him, and the flare of pain that flashed from her nipple
to her clit proved she had wandered over to the dark side in recent months.

Pulling
her breast from his mouth, Sam switched to the other side, watching as his lips
slid around her nipple before applying an equal amount of tender loving care to
it. She didn’t allow him as much time to play because honestly, she wasn’t sure
she would be able to hold out if he kept it up.

“Sam.”
His voice was rich and dark with passion, and she knew he was holding on to the
very last thread of his control.

“Yes?”
She asked again, knowing he was going to get frustrated with her any minute
now.

“Honey,”
he tried for sweet, but failed miserably, “if you don’t untie me from this
fucking bed, I’m going to break the goddamn headboard.”

Grinning,
Sam slid down his body once more, making sure he felt exactly how wet he’d made
her in the last few minutes. And yes, she wasn’t sure how it happened, but
somehow she managed to tie him to the bed. It was a wicked fantasy that was
proving to be so much hotter than she originally anticipated.

“I’m
not finished with you yet.” She hadn’t been able to convince him to let her tie
his legs to the bed, so she was able to use that to her advantage, pushing them
wider as she slid off of his body into position between his thighs.

Once
again she gripped his erection, ever so slowly sliding her hand over his
velvety shaft, enjoying the way he pulsed and throbbed beneath her touch.

“Do
you want me to do
this
?” She asked seductively as she tilted her head
down and placed a soft kiss on the engorged head.

“Baby.”
Logan growled. “I’m not playing with you anymore.”

“Well,
actually I’m the one playing.” Sam retorted before slipping her tongue across
the slit of his penis, her eyes watching him as he watched her. “Or would you
prefer that I do
this
?” She asked before sliding her lips over the
smooth head, sucking gently as she pulled him into her mouth.

For
the next few minutes, Sam focused on ravishing him with her tongue, using her
teeth on occasion to gently scrape the underside which once again had him
trying to break free of his bonds.

Sam
chuckled, keeping his cock in her mouth, letting the vibrations wash over him. Oh,
she knew she was pushing him too far this time, but if the past was anything to
go by, she was going to thoroughly enjoy her punishment.

Logan
jerked against the bonds on his wrists, and Sam knew they would give at any
moment, so she returned her attention to his cock, using her hand to hold him
still while running her tongue down the sensitive underside until she reached
his balls.

“Be
still. I’m not done.” She told him before sucking and licking and torturing him
more than she knew he was willing.

“Oh,
honey. You’re more than done.” Logan growled before ripping the scarves that
tied his hands and launching himself up from the bed, sending Sam into a fit of
giggles before he had her flat on her back.

Logan
wasn’t quite sure how his wife convinced him to let her tie him down. The gleam
in her eye had been so full of promise, and she certainly hadn’t disappointed.
The problem was he wasn’t willing to come until he made her come first. That
had become a hard and fast rule that he rarely broke.

When
Sam tried to pull away from him, laughing, he gripped her ankle and pulled her
closer until he had reversed their roles and he was kneeling between her
splayed legs.

“Damn
that’s pretty.” Logan told her as he held her open with both hands, staring
down at the soft, pink folds spread before him. “Your pussy’s wet, baby.”

Knowing
she liked when he teased slow and easy, Logan decided to give her a taste of
her own medicine. He buried his face between her thighs, using his tongue to
delve deep inside of her in one quick thrust before emerging and sliding back
and forth over her slit, not lingering to torture her clit the way he knew she
wanted.

The
sound of his wife begging was music to his ears. He once again thrust his
tongue into her silky hot depths, pushing deep and retreating, over and over as
she began to moan and writhe on the bed.

“Yes
baby?” He asked, mimicking the sweet innocence she’d doused him with earlier.
“Tell me, Sam. Tell me what you want me to do to you.”

She’d
gotten confident in the past few months, Sam had. And it turned him on like
nothing else. Doing exactly as she instructed, Logan wrapped his tongue around
her clit, flicking back and forth over the sensitive bundle of nerves, using
his hands to hold her legs apart when she would have tried to trap his head
between them.

He
might know what she liked, but that didn’t mean he was going to give in to the
little minx. He had payback on his mind, and at the moment, he wanted nothing
more than to bury himself inside her warm, willing body.

“Turn
over.” He demanded, easily flipping her onto her stomach before she had a
chance to argue.

That’s
another thing he’d learned about his wife in the last two months. She’d gotten
bold, thinking she had the upper hand when it came to dominating the bedroom.
What she didn’t know was Logan would never relinquish full control, and since
his brother had ceased to participate in their sexcapades, Logan had been
seeking out another man to join them.

Since
this was Sam, his wife, and he cherished her more than his own life, he’d been taking
his time in determining exactly the right person to join them. What she didn’t
know… he’d found the man who would soon get the luxury of experiencing heaven
as only Logan knew it.

With
Sam on her stomach, Logan lifted her hips and aligned himself with her until he
was inching his cock into her sweet pussy inch by inch, slow and steady.

“Logan,
please!” Sam screamed as she tried to push back against him. “Fuck me, please!”

He
definitely loved to torture her, but he never could tell the woman no.

Bracing
his knees on the mattress and lifting her hips slightly, Logan began to sink
inside of her, the velvety soft walls of her pussy clamping down on him,
milking him until he was barely a breath away from exploding.

With
one hand, he reached around her hip and found her clit. Applying just enough
pressure, he pinched between his index finger and thumb as he thrust once…
twice… three times before she exploded, his name reverberating through the
room.