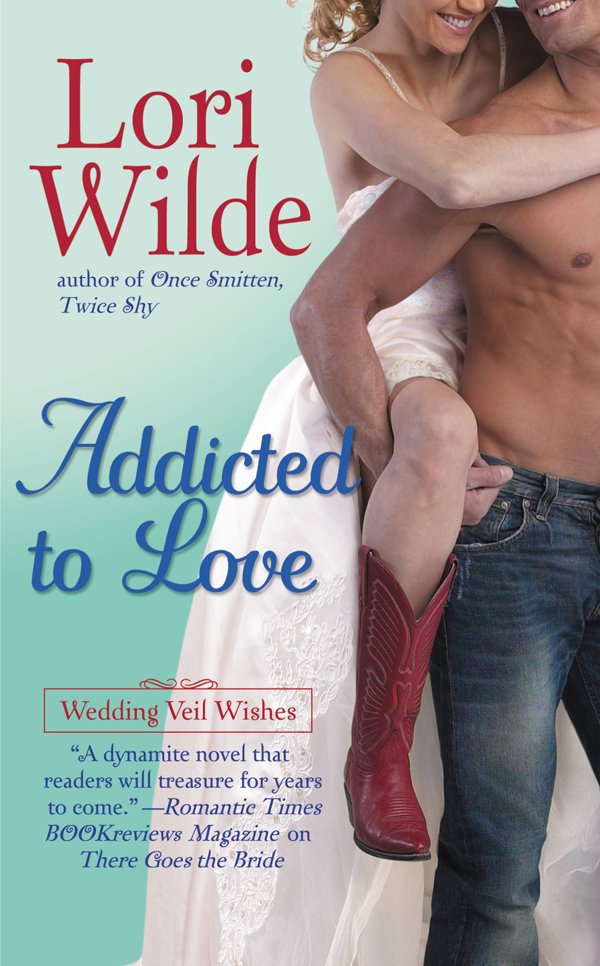 The Forever name and logo is a trademark of Hachette Book Group, Inc.

“You must think I’m crazy.”

A Preview of Jillian’s Story

“You must think I’m crazy.”

“When I look at you, crazy is not the word that comes to mind.” The suggestive innuendo in his voice took Brody by surprise.

“No? What word comes to mind?”

“Caring, expressive, a little overly passionate, maybe, but that’s not a bad thing.”

“No.” He didn’t know why, or what he intended on doing when he got there, but Brody took a step toward Rachael.

Her breathing quickened. He couldn’t help noticing the rapid rise and fall of her breasts beneath the T-shirt.

His gut was telling him something else now. Something he needed to ignore no matter how much he ached to act on it.

Without meaning to, Brody propped one forearm against the doorframe above her, leaned in, and lowered his head. The sexual tension was so electric he could almost hear it snapping. He dipped his mouth lower . . .

“Lori Wilde at her best . . . The magic and romance that Ms. Wilde began in her first book in the series,
There Goes the Bride
, continues in this novel . . . I really loved this story. The writing is wonderful and the plot grabbed my attention from the first page. I fell in love with the characters and couldn’t wait to see how they worked everything out.”

“A definite crowd pleaser . . . Lori Wilde can write very engaging and quirky romances and
Once Smitten, Twice Shy
is one of them . . . [A] good read with some suspense to boot.”

“A wild ride on an emotional roller coaster.”

THERE GOES THE BRIDE

“I adored this book! I even kept it in my purse in the hopes that I would have a few minutes in which to squeeze in a paragraph or two . . . I can’t wait to read the next in this wonderful new series . . . Superb!”

“The passion in
There Goes the Bride
is enjoyable . . . another solid romance from Lori Wilde.”

“
There Goes the Bride
is a [Lori] Wilde madcap contemporary romance.”

“FOUR HEARTS! Ms. Wilde conquers a whole new part of the romance genre . . . lots of funny elements and a great cast of characters. Make some space on your keeper shelf. You will need it.”

YOU ONLY LOVE TWICE

“Part thriller, part adventure, and always humorous, Wilde’s latest is just what the doctor ordered to chase away the blues. This author proves that she does humor right.”

“Fast-paced adventure, sexy situations, and lots of suspense will make Wilde’s book appeal to a wide spectrum of readers.”

“Readers will be . . . laughing at the shenanigans.”

“Super fun romantic suspense . . .
You Only Love Twice
[is] a . . . humorous contemporary thriller worth reading.”

“4 Stars! This novel has a nice balance of humor, sexy romance, and a large splash of danger.”

“Fun, romantic . . . humorous and fast-paced . . . Fans who appreciate a breezy, lighthearted romantic suspense . . . will enjoy reading the adventures of the wilder Cooper twin.”

“Witty . . . the chemistry between David and Maddie is hot enough to satisfy those looking for light summer reading.”

“Quite the exciting romp. Fans will be charmed.”

“Lovable . . . Wilde has a unique voice that will soar her to publishing heights.”

“With a sassy, in-your-face style reminiscent of Janet Evanovich, Wilde has created an unforgettable heroine.”

“Hot and funny and at the same time sweet . . . will have you turning the pages long after the lights should be out.”

“Sexy . . . Wilde dishes up a delicacy that really hits the spot.”

“Great fun . . . A wild ride! Her characters are so alive and the plot is outstanding. I loved every word.”

You Only Love Twice

There Goes the Bride

In memory of Frederick Shawn Blalock

Be at peace, my brother.

W
hile Valentine, Texas, is a real place, the town of Valentine depicted in the pages of this book is completely fictional. I’ve taken literary license for story purposes.

T
he last thing Sheriff Brody Carlton expected to find when he wheeled his state-issued white-and-black Crown Victoria patrol cruiser past the welcome to valentine, texas, romance capital of the usa billboard was a woman in a sequined wedding dress dangling from the town’s mascot — a pair of the most garish, oversized, scarlet puckered-up-for-a-kiss lips ever poured in fiberglass.

She swayed forty feet off the ground in the early Sunday morning summer breeze, one arm wrapped around the sensuous curve of the full bottom lip, her other arm wielding a paintbrush dipped in black paint, her white satin ballet-slippered toes skimming the billboard’s weathered wooden platform.

The billboard had been vandalized before, but never, to Brody’s knowledge, by a disgruntled bride. He contemplated hitting the siren to warn her off, but feared she’d startle and end up breaking her silly neck. Instead, he whipped over onto the shoulder of the road, rolled down the passenger-side window, slid his Maui Jim sunglasses to the end of his nose, and craned his neck for a better look.

The delinquent bride had her bottom lip tucked up between her teeth. She was concentrating on desecrating the billboard. It had been a staple in Valentine’s history for as long as Brody could remember. Her blonde hair, done up in one of those twisty braided hairdos, was partially obscured by the intricate lace of a floor-length wedding veil. When the sunlight hit the veil’s lace just right it shimmered a phosphorescent pattern of white butterflies that looked as if they were about to rise up and flutter away.

She was oblivious to anything except splashing angry black brushstrokes across the hot, sexy mouth.

Brody exhaled an irritated snort, threw the Crown Vic into park, stuck the Maui Jims in his front shirt pocket, and climbed out. Warily, he eyed the gravel. Loose rocks. His sworn enemy. Then he remembered his new bionic Power Knee and relaxed. He’d worn the innovative prosthetic for only six weeks, but it had already changed his life. Because of the greater ease of movement and balance the computerized leg afforded, it was almost impossible for the casual observer to guess he was an amputee.

He walked directly underneath the sign, cocked his tan Stetson back on his head, and looked up.

As far as he knew — and he knew most everything that went on in Valentine, population 1,987 — there’d been no weddings scheduled in town that weekend. So where had the bride come from?

She went right on painting.

He cleared his throat again, louder this time.

Dots of black paint spattered the sand around him. She’d almost obliterated the left-hand corner of the upper lip, transforming the Marilyn Monroe sexpot pout into Marilyn Manson gothic rot.

The cynic inside him grinned. Brody had always hated those tacky red lips. Still, it was a Valentine icon and he was sworn to uphold the law.

He glanced around and spied the lollipop pink VW Bug parked between two old abandoned railway cars rusting alongside the train tracks that ran parallel to the highway. He could see a red-and-pink beaded heart necklace dangling from the rearview mirror, and a sticker on the chrome bumper proclaimed i heart romance.

“If you don’t cease and desist, I’ll have to arrest you,” he explained.

She stopped long enough to balance the brush on the paint can and glower down at him. “On what charges?”

“Destruction of private property. The billboard is on Kelvin Wentworth’s land.”

“I’m doing this town a much-needed community service,” she growled.

“This,” she said, sweeping a hand at the billboard, “is false advertising. It perpetuates a dangerous myth. I’m getting rid of it before it can suck in more impressionable young girls.”

“What myth is that?”

“That there’s such things as true love and romance, magic and soul mates. Rubbish. All those fairy tales are complete and utter rubbish and I fell for it, hook, line, and sinker.”

“Truth in advertising
is
an oxymoron.”

“Exactly. And I’m pulling the plug.”

You’ll get no argument from me,
he thought, but vandalism was vandalism and he was the sheriff, even if he agreed with her in theory. In practice, he was the law. “Wanna talk about it?”

She glared. “To a man? You’ve gotta be kidding me.”

“Judging from your unorthodox attire and your displeasure with the billboard in particular and men in general, I’m gonna go out on a limb here and guess that you were jilted at the altar.”

She didn’t respond immediately and he was about to repeat the question when she muttered, “The Chicago Bears.”

Brody sank his hands onto his hips. “The guy jilted you over football?”

“Bastard.” She was back at it again, slinging paint.

Brody shrugged. “Is that supposed to mean something?”

“Hallelujah,” the bride-that-wasn’t said. “I’ve found the one man in Texas who’s not ate up with football.”