After Dawn (Book 3 of the Into the Shadows Trilogy)

BOOK: After Dawn (Book 3 of the Into the Shadows Trilogy)
>>DOWNLOAD HERE >>READ ONLINE NOW
ads 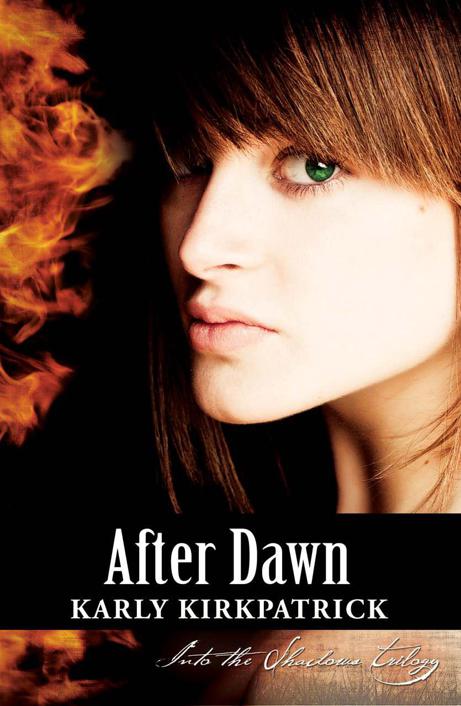 Into the Shadows Trilogy

This book is a work of fiction. Names, characters, places and incidents are either products of the author’s imagination or used fictitiously. Any resemblance to actual events, locales, or persons, living or dead, is entirely coincidental. All rights reserved. No part of this publication can be reproduced or transmitted in any form or by any means, electronic or mechanical, without permission in writing from the author or publisher.

Giant beads of sweat rolled down his forehead, his gray hair disheveled. President Stevens rubbed his hand over his face, willing her image away. But she was with him always. He couldn’t seem to shake her. The first night he’d seen her, floating above his bed, he’d assumed she was a bad dream.

He convinced himself that she was nothing more than the result of some spicy Chinese food.

But she had returned.

Her emerald eyes pierced his very soul, shredding it like jagged daggers. Though she wore the clothes of an EOS prisoner, he was unable to make out the number tattooed on her neck.

And now he saw her everywhere. Her face haunted him, so much so he was convinced he saw her during the day as well, not just in his dreams. He was sure she was waiting just around the corner—just outside the door.

She didn’t often speak. Just hovered, or sat in the corner, or stood over him as he lay in bed. He feared her voice. She would come for him. He knew it.

And whom could he tell?

Martin? No. Even Martin would think he was crazy. Gentle Martin, one of the few he’d spared from the Enemy of the State camp. But Stevens needed the protection. He was the president, after all. He could use someone on his side, someone he trusted to keep an eye on those around him.

Martin had told him that General Kobayashi had doubts. He saw them floating in his mind, he said. He already eliminated a problem earlier in the year. Deshaun Haley. But he had to be careful. See if Kobayashi’s doubt was going to affect his plans to eradicate those filthy EOS refugees from the northern hemisphere. He couldn’t just go around killing everyone. Or could he? No, no, he had to get his mind straight. He had a briefing on the Mexican offensive in a half an hour.

A knock at the door echoed through his bedroom and he jumped. He threw the shades open hours ago, hoping the morning light would chase her away.

“Good morning, sir. Here’s your suit for the briefing.” Martin breezed into the room and draped it over a blue brocade chair in the corner.

She
sat there sometimes. The thought of her sent a shiver down President Stevens’ spine.

Martin peered curiously at President Stevens. “Sir? Are you feeling quite all right? You’re looking a little under the weather.”

“I’m fine.” He injected more strength into his voice than he felt and rose to his feet. “Let’s get this over with.”

Paivi hoisted a hot stone onto a pile. Her muscles screamed, stretched to their limit in the blistering sun. She had only arrived in the camp two weeks ago with Molly on a crowded cattle car. The Anti-Terrorist Coalition guards had wasted no time putting her and the other new EOS prisoners to work.

Paivi reached into Molly’s mind with her own and snatched glimpses of words.

Are they seriously making us do this?
Molly thought.

Ugh, right? My hands are shredded.
Paivi pushed back, sending her thoughts straight into Molly’s mind.

In Tibet, Master Gendun had told Paivi she was now awakened. That was the understatement of the year. Since she had arrived at the camp, Paivi discovered so many more talents and skills. She could now read minds and send her thoughts to others. It wasn’t safe to practice much in public. But mind reading and sharing thoughts with Molly was harmless. Most everything else they practiced in the darkest hours of night in the corner of the barrack.

She probed the minds of the guards enough to know that President Stevens had kept his word. Every guard at the camp was nothing more than a mundane ATC guard.

What a fool, she thought after the discovery. He was clearly not as bright at the Chinese, who sought to harness the untold energy and talents of their people. The same Chinese who were plotting the demise of the United States with their weapons. She wondered if Stevens had any inkling of what they had in store for him once the war with Mexico began. She doubted it.

President Stevens was perfectly content, if not giddy, about destroying every last bit of magic in his population. And everyone else’s, if he had his way.

Paivi regretted not getting a full night’s sleep. She hauled another rock from the heap and added it to the growing pile on the back of a truck. Her ears rang each time a rock landed with a clang. The mountain that seemed so far from them at the camp hovered threateningly over their little group.

No one spoke about what was in the mountain. Paivi had heard stories of EOS prisoners going in and never coming out. But that was it. Since no one returned, they could only guess as to what was really going on inside.

Day after day, they moved the rocks dumped at the entrance of the mountain. ATC guards manned the trucks and it appeared civilians were doing the heavy digging inside. They looked healthier and cleaner than the EOS and had all their hair. Plus, they had no tattoos emblazoned across their necks. She guessed they couldn’t trust the EOS to do the work. Or didn’t want them telling anyone what they saw.

The camp floated off in the distance, like a mirage in the midday heat. The burly woman in charge of them, who they were ordered to call Agent Dean, jumped out of an air-conditioned cab and blew her whistle.

A small sigh of relief passed through the group as they dropped their rocks with a thud. They shuffled toward the back of the guard’s truck to the coolers that held their lunches.

Molly climbed up alongside two other women from Barrack 54. They flipped open the coolers, handing around bottles of water and sandwiches to each EOS prisoner. Their barrack had joined with two others for the day and there were easily a hundred women huddled around the truck.

Paivi waited patiently for her turn and gladly accepted the bottle of water and sandwich. Not that the sandwich would do much for her, but the water—it was heaven in a bottle. She clutched the cool bottle to her neck, wishing she could absorb it to her very core, but it never seemed enough.

She had spent the entire time in Canada and Nepal longing for heat, for the warmth of the sun. Now it’s all she had. Day in and day out. She imagined hell couldn’t be hotter than this.

Cool water splashed down her throat and reminded her of just how thirsty she was. She swung around the opposite side of the truck to see if she could scrounge up a place for her and Molly to sit out of the sun.

No such luck. The small bit of shade was crowded with hot, sweaty bodies. Despite the size of the group, their voices were nothing more than a quiet murmur.

She plopped down on the edge of the shade and adjusted the scarf that covered her head. Her hair had started growing back and was incredibly uncomfortable. She ran her fingers through it and scratched her scalp, reveling in the small bit of relief it provided.

She wasn’t quite sure why the ATC insisted on cutting it in the first place, only to let it grow back. Paivi hadn’t been able to see her reflection in a mirror since arriving, but her mom told her it was growing back darker, a light brown instead of blond.

Her blond hair was truly gone forever. Not that she minded. She had parted with that phase of her life when she left St. Andrew months ago. Blond Paivi, Paivi who loved high school, enjoyed playing sports and hanging out with friends, she was dead. She was no longer on any plane of existence that Master Song had taught her about.

New Paivi was wiser and stronger, her skin a dark reddish-brown from the desert sun. Her hands were covered in scratches and blisters and a tattoo of her EOS number, PA150778, on the side of her neck—a permanent reminder to her and others that she was less than human.

Paivi sat back, observing the entrance of the mountain as another truck squeaked to a stop and dumped a pile of rocks on the ground.

Paivi took a bite of the sandwich. It didn’t taste much different than the landscape around them. Dry. But food was food and she ate everything in order to keep her strength up. She knew the time would come soon when she would have to take a walk. A long walk to the Mexican border. She was still hoping that they would be able to commandeer some vehicles to make the trip easier.

I really want to know what they’re doing in there.
Paivi pushed the thought over to Molly.

Molly took a swig of water.
Think you can find some way? With all your powers, there has got to be something you could do.

I tried reading Dean’s mind. She doesn’t know anything. I’ve got a couple more ideas. Maybe I’ll try tonight.
Paivi polished off the last bites of her sandwich and washed it down with a swig of water. She eyed the black hole in the mountain, vowing to figure something out just as soon as she spoke with Torsten after lights out. It might be another sleepless night, but she wasn’t here for a vacation.

Molly nudged her arm and nodded back to the pile of rocks. The group rose silently from their short lunch break.

“Back to work, you pieces of shit,” the guard shouted out of the truck cab window. Her fat face was shiny with sweat, even in the air-conditioned cab. Paivi and the other women knew better than to give her any reason to exit the truck. She had a bullwhip at the ready, happy to introduce it to anyone unwilling or unable to do the work.

Paivi’s hand brushed against her EOS-issued shirt. It was already frayed and filthy. Once a week the guards allowed them to wash their clothes in a well at the far end of the barracks. But dunking clothes in cold water and letting them dry was hardly what Paivi would classify as washing. Considering she’d been there only a few weeks, it was no wonder the long-term residents were draped in nothing more than rags.

Borrowing Trouble by Mae Wood
Unwanted by Kristina Ohlsson
How Do I Love Thee? by Valerie Parv (ed)
Winter Garden by Hannah, Kristin
The Bluffing Game by Verona Vale
The Lost Sun by Tessa Gratton
Pixie The Lion Tamer (Shifters, Inc.) by St. Clair, Georgette
The Wells Bequest by Polly Shulman
Revenge Is Mine by Asia Hill
Involuntary Witness by Gianrico Carofiglio