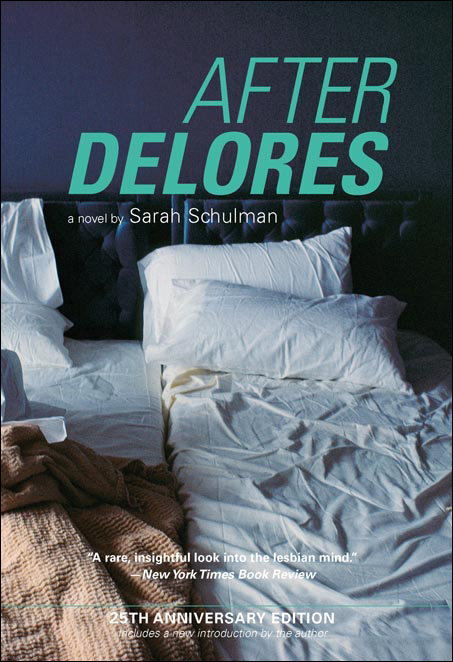 All rights reserved. No part of this book may be reproduced in any part by any meansâgraphic, electronic, or mechanicalâwithout the prior written permission of the publisher, except by a reviewer, who may use brief excerpts in a review, or in the case of photocopying in Canada, a license from Access Copyright.

This is a work of fiction. Any resemblance of characters to persons either living or deceased is purely coincidental.

Here and Yet, Not There

After Delores
came out of a vibrant, intense underground of gay women who, in the 1970s and 80s, had been rejected by their families and contexts but refused to give up their homosexuality. There were all kinds of prices one paid for refusing to be subdued; they included poverty, marginalization, and a raw danger that comes into focus when all protections are withheld. There was a physical danger from living without visible ownership by men. Walking down the street alone or with other women, having women coming in and out of each other's apartments, not having access to men's money and prestigeâall of these anti-social actions telegraphed a vulnerability to exploitation, violence, and derision. Punishment from the outside world, whether active degradation or passive indifference, became combined with abandonment by family: the absence of familial love, understanding, interest, support, and material and emotional structure. This produced a kind of desperation, a desire to exist when one was not supposed to, especially on her own terms. There was desperation for money, for a sense of safety that could never be accomplished, for a place of rest that was not possible. And the only moment when recognition held a glimmer was with each otherâequally deprived and equally determined. The women who had the integrity to be out enough to live their sexuality paid a price in every other realm of their lives.

I now see how that produced a kind of emotional anarchy. If no one cared about what happened to you, then no one cared about how you acted. There was no one more demeaned in your universe than the other gay girls around you, and so replicating the violations she already experienced from her family, from the movies, from her job, was normalizing somehow. Being unaccountable to another lesbian was perhaps the only dominant culture behavior available. So everyone just stood by and let it happen. They simply didn't believe that lesbians should be accountable for their actions. It's the flip side of exile: anonymity. Families were back in Michigan or Jamaica or the Bronx or Scarsdale, no one who knew you was watching, and the only ones who were didn't matter. And yet queer people always needed each other for love and for sex, and for someone to talk to while everybody else in the world was back home for the holidays. I remember Thanksgiving as the busiest day of the year for gay bars. The level of undeserved emotional punishment experienced by queers created an intensity around existence that the protected could never comprehend. It was from this reality that I wrote
After Delores
.

“A rare and insightful look into the lesbian mind.”

After Delores
was the first modern lesbian novel to have a rave review in The New York Times, written by Kinky Friedman, a singer with a band called The Texas Jewboys, who also wrote detective novels. The review was titled “She Considered Boys For About Five Minutes,” and he compared me to Kafka. With this observation, he simultaneously recognized the quality of the writing while acknowledging how new and unusual the novel's point of view was. This, in 1988, was considered to be a good thing. It was very exciting. For the first time in a long time, lesbian readers learned about a book through mainstream media, and our novels were given a capital L â¦ for literature. There was a rise in stature, opportunity, respect, and therefore, possibility. The book's recognition inspired the publication of other novels with lesbian protagonists over the next four years, thus expanding American literature's range of character, experience, and perspective.
After Delores
was translated into eight languages and was widely read and shared around the world.

But by 1992, this new open-minded environment for lesbian fiction had come to an end, contained by the vagaries of niche marketing. Rarely again would an authentic lesbian novel be reviewed at such a high level by a straight man; it provided too much legitimacy and was too normalizing. Huge retail chains like Barnes & Noble took books with lesbian protagonists off the fiction shelves and stuffed them away in the “Gay” section. Unspoken quotas were imposed by mainstream media outlets on how many lesbian books could be reviewed, forcing such books to compete against each other instead of being evaluated on their literary and intellectual merits. All of this resulted in an unpredictable paradigm readjustment where writers were suddenly allowed to be out of the closet personally and still achieve recognition, but only so long as their books did not have lesbian protagonists. And soon novels with lesbian protagonists disappeared from the mainstream, while lesbian authors who did not represent themselves in their books were allowed to thrive. This, of course, produced a chilling effect, in which talented fiction writers became fearful of writing lesbian novels that they saw as unpublishable, and a plethora of MFA programs that quickly became necessary to having a serious writing career were unable to provide lesbian students with support and knowledge to write and publish novels based in universes where the author, herself, could also exist. Today, very few novels with lesbian protagonists are written and only a handful are published by mainstream presses, yet it is much, much easier for lesbians and queer women to be out as editors, publishers, and critics, as long as they don't support lesbian fiction. While lesbian characters exist with more frequency in mainstream books by straight authors, I often do not recognize these characters. We became representable by others, and invisible to ourselves.

Just a word on form. My first novel,
The Sophie Horowitz Story
(1984), was the third lesbian detective story to be published. The first was
Angel Dance
(1977) by MF Beal (a pseudonym, I suppose), followed by Barbara Wilson's
Murder in the Collective
(1984). Our lives were a mystery anyway, so the attraction by early lesbian writers made sense. But the choice of genre reflected a desire to be part of popular culture without giving up the authenticity of suspense and threat and romance and pursuit with which we all co-existed. The prototype, of course, is Patricia Highsmith, in particular her book
The Price of Salt
, the best-selling lesbian novel of all time, published under the pseudonym Claire Morgan. In Highsmith's books (
Strangers on a Train, The Boy Who Followed Ripley
, etc.) she told us “who did it” right away; the story lay in the perpetrator's guilt. By the time I got to
After Delores
, the detective format was dark. Not only was I also in the urban world of “noir,” but I'd gotten there by escaping from the tyranny of positive images that had started to dominate grassroots feminist publishing at the time. Ironically, it was the mainstream that was allowing the pain and contradiction to show, even more ironically because it confirmed their pre-existing prejudices of lesbians as sinister. So truthful, more complex representations were briefly possible in the mainstream because they misinterpreted our contradictions as signs of pathology and not oppression. Even more “ironically,” as lesbian content got pushed out of the mainstream, the field overflowed with lesbian detective novels to the point of banality, because weâever internalizing how we are viewed in dominant culturânow believed that we did not deserve literature and allowed ourselves to be contained within a genre that has always been considered second-rate.