Read After the Winter (The Silent Earth, Book 1) Online

After the Winter (The Silent Earth, Book 1) 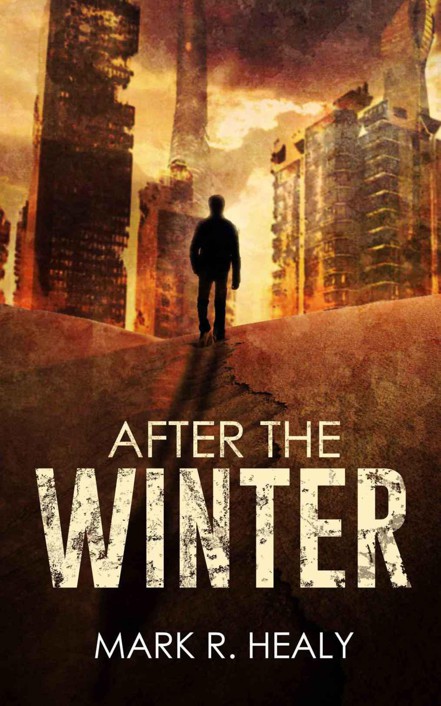 This book is a work of fiction. Any similarity between the characters and situations within its pages and places or persons, living or dead, is unintentional and co-incidental.

At the crest of a rise I stopped to survey the desert, trying to gather my bearings. The city below me sat baking in the afternoon sun, its spires parched and brittle like stalks of dead grass. The sky pressed in, a smouldering dark orangey-red that served as a reminder that the Winter had not long passed.

Once it might have been a gleaming hub of humanity cradled in a picturesque valley, but now the city was just a dustbowl collecting detritus that blew in from the plains.

I couldn't be sure if I’d been here before. Out in the wasteland, these ruined metropolises all began to look the same. Empty and abandoned to the whim of the elements, their once noisy, bustling streets now found voice only through the scraping of wind across the ruin of steel and concrete and glass.

Behind me, a set of footprints trailed into the distance as far as I could see. They were transient, soon to be scuffed away by the shifting sands with not a trace to be found.

That was a good thing, for it helped to camouflage my passage from those who hunted me. But it was not enough to hide me forever. They were resourceful, and tenacious, and full of hate. They would keep coming.

I looked wistfully toward home, somewhere out there in the west. I thought of everything I’d left behind, everything I’d given up, and of how I’d protected it the only way I could: by forsaking it, by leading the menace away.

The same menace that, now, I couldn’t escape.

On the horizon a dark smudge was looming, a sight that was all too familiar and yet still filled me with a sense of dread.

And it was moving fast.

I slung the tattered cloth satchel from my back and bent to rummage urgently through its contents. The satchel was wearing thin and falling apart at the seams. Inside, a few sparse items jangled about. A compass, a blunted knife in its sheath, a small metal file, a hard-bristled brush, a lighter and a pair of cracked binoculars. My hand fell on the item I sought, a grimy, grease-stained linen cloth, and I pulled it out, wrapping it around my face and then shouldering the satchel. I got moving.

Time was running out, and I had to find a path down to that city.

The rocky outcropping below me was not an avenue I would normally negotiate. It was a long way down to the bottom where rough-edged boulders protruded from the earth, waiting to pulverise anything unfortunate enough to fall upon them. Given more time, I’d have found a way around it, but right now I had no choice. I had to tackle it head on.

I scraped and slithered down the section that seemed most likely to offer handholds.  The wind was beginning to pick up, and it toyed with my attempts to remain surefooted on the rock wall.  Striving to increase my pace, my foot knocked away some loose rock.  I overbalanced, my hands clutching in vain at thin air, and I was sent spiralling to the ground below.  My landing was noisy, ungraceful, and jarringly painful. The ground was hard and unyielding, but as luck would have it, I landed narrowly between two boulders.  It could have been so much worse.  As it was, I lay stunned as the world spun around me, tiny pebbles cascading down the rock wall in my wake.

The contents of the satchel lay scattered about the place. Clambering shakily to my feet, I shuffled the disparate items back inside. The compass was smashed beyond repair. I dropped it inside the satchel anyway.

I cantered down the slope toward the city. As I neared, its towers reached toward the heavens at dizzying heights like great teetering gravestones. Ghosts of this long dead metropolis.

As uninviting as they looked, right now they were the only place in which I could hide.

The wind was agitated, whipping back and forth, one minute thrusting at my back and pushing me forward, and the next pummelling into my face and stinging my eyes with sand. I clamped the blackened cloth I had tied as a mask more tightly around my nose and mouth, but no matter what I did, the sand still got in.

Turning, I saw the sandstorm looming, black and monstrous.  It was bearing down on me now, gaining with every second.  I quickened my pace.  The boot on my right foot was disintegrating, the sole flapping madly and tripping me every second or third step.  I spent a precious few seconds ripping it off and then flung it limply at the encroaching storm, a futile act of defiance.  I half ran, half hobbled, my desperation growing, dipping a finger into my back pocket as I strode forward.  The photograph was still there.  I couldn’t lose that.  Not
that
. I’d rather be taken by the sandstorm than go on without it.

On the outskirts of the city, long abandoned houses, broken and leached of colour, wilted at the touch of the remorseless wasteland. They made meek promises of shelter, but I couldn’t bring myself to trust their rickety, gaping exteriors. They were like tottering old men on walking sticks offering protection from a blood-curdling giant. I pushed on.

Almost upon me, this swirling vortex of sand and wind was unlike anything I’d seen in all my time in the desert. It was now difficult to stay on my feet, and I could see only a short distance in front of me. If I didn’t find shelter soon, I’d have to take my chances with whatever I could get.

Like a godsend, the bulk of something black and rectangular loomed out of the murk. It was most likely an old apartment block from what I could tell, and at the very least it appeared to be more robust than anything else I had seen so far. I struggled onward as the sandstorm struck in earnest. I had to awkwardly scale a wrought iron fence, but once past it I was quickly inside through the broken wooden doorway.

I made my way up the staircase and secured myself inside the first apartment I came to. There was no furniture within, and the place was filthy, but it was enough to protect me from the maelstrom outside.

Slumping against the wall, I slid to the bare concrete floor, pulling off my remaining boot and dumping out a few handfuls of sand. With that done, I tossed it across the room in consternation, swatting at my hair and at my clothes. The sand spilled away in rivulets and scattered across the floor.

I pulled the photograph gently from my back pocket and looked upon it. Faded and torn at the edges, it was my only gateway out of this place, my ticket to another world. Rejuvenation for my spirit. Until the day came that I’d be heading home again, I was reliant on this, my one keepsake, to keep me going.

Outside, the sand and wind slammed at the windows and slowly darkness fell.

The next morning the storm had cleared out.  Looking through the filthy, dirt-smeared apartment window, it was like a different city out there.  I stood as sunlight streamed in around me, the sky a radiant deep blue and the buildings softly gilt-edged in the glow of the morning sun.

I’d made it deeper into the city than I’d realised, and the skyscrapers were close enough for me to make out a few details. In places, chunks of their exteriors had been ripped out, their steel skeletons jutting out at all angles, bits of reinforced concrete dangling precariously from great heights. I could see the glint of glass windows here and there, but for the most part they had been shattered long ago. One of the taller structures had keeled over to one side and lay half toppled on another beside it.