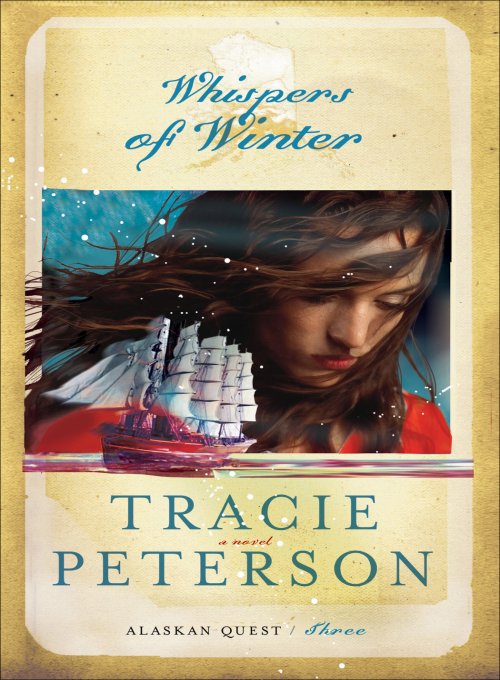 All rights reserved.
No part of this publication may be reproduced, stored in a retrieval system, or
transmitted in any form or by any means—electronic, mechanical, photocopying,
recording, or otherwise—without the prior written permission of the publisher.
The only exception is brief quotations in printed reviews.

To Sarah Long for all you do;
the books are better because of you.

Thank you for being a blessing to me.

A
yoona is dead.”

Leah Barringer Kincaid looked into the face of Oopick and saw there was no exaggeration in her statement.

“Dead?” The word stuck in her throat.

Ayoona’s daughter-in-law nodded. “She went to sleep last night and …” Tears began to flow down the brown weathered cheeks of the Inupiat woman. “John stayed with her but told me to come let you know.”

Leah shook her head. The news was unexpected; no doubt it had shocked John to have his mother suddenly taken from them. Ayoona was old to be sure, but she’d been so full of life, so capable just the day before. An emptiness settled over Leah. It wasn’t that she didn’t know where Ayoona would spend eternity—the old woman had believed in Jesus since attending a missionary school as a youngster and had often been a great source of encouragement when Leah’s own faith had seemed weak. But this loss, coupled with the burden and grief she carried for her missing husband and brother, had Leah feeling overwhelmed.

Last year her husband, Jayce Kincaid, and brother, Jacob Barringer, had journeyed north on a ship called
Regina
. The captain bore the world a grudge for the death of his wife. Still, he had an interest in the Arctic, though perhaps he had hopes of losing himself there. At best he seemed to presume the frozen north could make him forget his woes. Instead, his carelessness or forgetfulness had caused the ship to get caught in early winter ice floes, which took the ship hostage and locked them in tight. Whalers returning south for the season had shared of seeing the
Regina
trapped in ice and headed in a westerly current toward the Russian boundaries. But no one seemed to know exactly where the ship was now or if its crew and passengers had survived.

“I’ll miss her so much,” Leah said, forcing her thoughts back to Ayoona. “Just two days ago we were making plans to sew seal skins for a new
umiak
.” The small skin boats were a tremendous asset to the Inupiat people, who sought much of their sustenance from the Bering Sea.

“We will sew the skins and remember her,” Oopick said, wiping her tears. “We will tell stories of her life and be happy for her.”

Leah hugged her friend close. Oopick was probably fifteen years her senior, but Leah loved her like a sister. “We will do just that. You let me know when to come, and we will sew the skins for Ayoona.”

Just then one of Leah’s twins began to cry. Leah released her hold on Oopick. “I’ll come help with the body as soon as

Helaina returns to watch the children.”

Oopick nodded. “I need to tell Emma and Bjorn.”

Leah knew the missionaries would be devastated to learn of Ayoona’s passing. The old woman was greatly loved by the people of the village, and her loss would be sorely felt for years to come. Oopick departed as Wills joined his sister, Merry, in crying for attention.

“Poor babies,” Leah said, walking to the homemade crib her children shared. Both were soaking wet and in need of a warm bath and fresh diapers. Leah already had hot water on the stove and, despite her children’s miserable howls, went in pursuit of the copper bathtub and towels.

She knew she was more fortunate than most in the area. The new house she and her husband had ordered from the States had arrived in pieces last year. When Jacob and Jayce failed to return from their summer mission to explore the Arctic coast and islands, Bjorn Kjellmann had organized men to build the house in Jayce’s absence. The Swedish man of God knew no lack of enthusiasm for helping his fellowman, and because Leah and Jacob were much loved in the community, help was readily available to see Leah and her children properly housed for the winter.

It was Bjorn, in fact, who had helped them to figure a way to assemble the foundation on a system of stilt-like supports to keep the permafrost from melting and sinking the house. The house had settled some, but Bjorn assured Leah it would be fairly easy to remedy each year by adding or subtracting wedges under the house. All of this would hopefully keep the structure of the new home stable.

Once completed, their house brought the natives visiting in throngs. Everyone wanted to experience the store-bought house. They laughed at the way it sat up off the ground. Their
innes
were built into the earth in order to provide insulation and protection from the wind. The fact that they flooded out each summer seemed insignificant; they were a nomadic people during the warm season anyway. It was the one thing Leah had never quite gotten used to in all her years on the Seward Peninsula. She longed for stability, consistency, and a sense of permanency. None of that could be had when a person constantly traveled.

Leah poured hot water into the tub, then added a measure of cold water until the temperature felt just right. With this accomplished, she threw a few more pieces of driftwood into the stove. Although it was finally May and spring breakup had begun, the air outside could be quite cold and could chill the house. She wanted nothing to threaten the health of her children and therefore kept the dwelling as warm as possible to afford them every benefit. The north was not kind to those who were weaker—children and the elderly often suffered the most.

Leah thought again of Ayoona. How strange it would be not to have her around to talk to. Ayoona had taught Leah so many things. Things that no doubt had kept her alive over the years.

With the water ready, Leah went to the twins’ bedroom and noted that their tears had stopped. They were now quite caught up in playing with the sheet on their homemade mattress.

The twins eagerly pulled themselves up and balanced their walks by holding on to the railing of the crib. Leah could hardly wait until they could toddle on their own, yet she also feared that time. One baby would be hard enough to keep up with; she feared two would be nearly impossible.

She lifted her children in unison and made her way back to the kitchen, where the copper tub waited. Placing them on the table, Leah talked and cooed while undressing first one and then the other. The children seemed captivated by her voice, and it never failed to thrill Leah to realize they were her own flesh and blood. Of course, in the back of her mind she still felt haunted by the uncertainty about their parentage. Her husband was always good to assure her that such things didn’t matter, but to Leah it was an ominous rain cloud that hung over her otherwise perfect party.