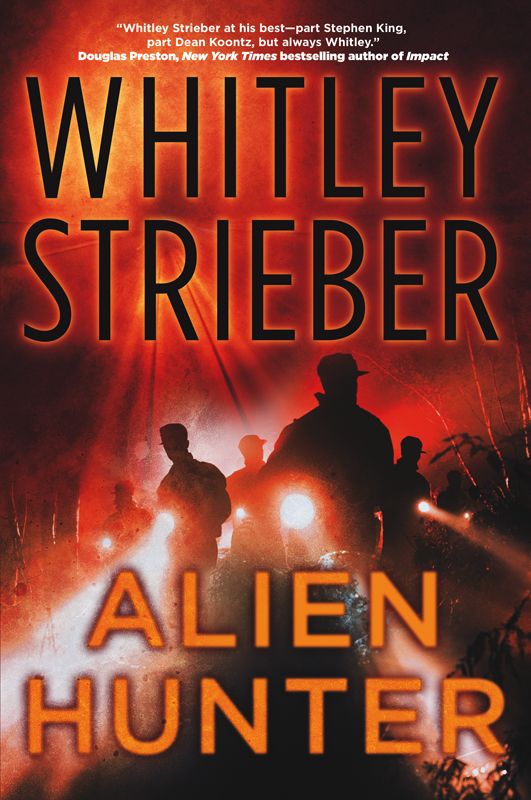 This book, and the Alien Hunter series, are dedicated to the people who work behind the scenes to keep our world safe.

I would like to thank Anne Strieber, who always insisted; my editor, Robert Gleason, who always understood; and Eliani Torres, whose attention to detail extracted my story from my prose.

Beware the bearers of false gifts and their broken promises. Much pain but still time. There is good out there. We oppose deception.

—message in a crop formation found on a farm in the United Kingdom, August 2002

Flynn reached for her and she wasn’t there. Her side of the bed was cold and he was a detective, so he came immediately awake.

He rolled out of bed, slid his feet into his slippers, and set off into the midnight house. It was November 16, 2002, the time was twelve-forty, the house was cool but not cold, there was no obvious sign of foul play.

Hurrying now, he went downstairs, turning on lights as he passed the switches. By the time he reached the kitchen, he knew that she wasn’t in the house and that there was no point of entry that would suggest a forcible kidnapping. In any case, he couldn’t imagine why she would be kidnapped or by whom. But he’d been a cop for six years, a detective for two. In that time, he’d made a couple of hundred very bad people very mad, and some of them were people who might do just about anything.

Going back over his cases in his mind, though, he couldn’t see a revenge kidnapper, at least, not one that was presently at large.

Just to be thorough, he checked the basement. They were in the process of finishing it, and it was full of boxes of ceiling tiles and Pergo flooring.

All doors were locked, all windows were locked. The alarm system was armed. So nobody could’ve come in here, not without all hell breaking loose.

She’d gone out. Had to have.

He called her cell—and heard it ringing upstairs. He went up. It was on the dresser but not in its usual place in her purse. Her purse was gone.

The first cold tremble of fear passed through him. Something was obviously very wrong here. Abby didn’t get up in the middle of the night and go out. Never, not without telling him.

Following the rules, he dialed 911. “This is Detective Errol Carroll. I’d like to report my wife, Abigail Carroll, missing. Probable foul play.”

The 911 operator responded, “We have a car moving, Flynn.”

Next he called his boss, Captain Edward Parker. “Eddie, it’s me, I’m sorry about the time. Abby’s gone missing.”

As the reality set in, a terrible, frantic urgency swept him.

“The alarm system is still on. Nobody broke in.”

Silence. Flynn could practically hear Eddie thinking. They’d known each other since they were kids and they’d both known Abby almost as long. Both had dated her. Flynn had won.

“You guys doin’ okay?” Eddie asked. It was his way of broaching the question that was going to be on everybody’s mind.

“Eddie, this isn’t a marital thing. Somebody got Abby.” He knew that every word had to be measured tonight, because if he wasn’t careful, this would get knocked down to an adult missing person real fast. “Look, I can’t stay in here. I gotta roll.”

He didn’t much like Tom and Tom didn’t much like him. But Tom did his job. Sort of. “Okay, I’m gonna back him up, though. He’s not gonna drop this down to an MPA because it’s not an MPA, Eddie.”

There came a knock at the front door. Decisive, loud, the way cops knock.

Where are you, baby?

He disarmed the alarm system and let the uniforms in. It was Willy Ford and a deputy sheriff he didn’t know, name of Menchaca. “Hey guys, thanks for doing it so fast. I got a missing wife. Almost certainly a kidnap.”

“Jeez, Flynn, Abby’s been kidnapped?” Willy had flirted with Abby at the Memorial Day barbecue last year. Lots of laughs.

“Is there a point of entry?” Menchaca asked.

A car pulled up and Eddie got out. He hurried up the walk, his belly bouncing, his gray hair fluttering in the night wind. His fly was down. You could see pajamas in there. Flynn had a damn good friend in Eddie.

“Anything?” he asked as he came in.

“We need prints out here,” Flynn said. He shuddered. He was freezing cold on a hot night. “Look, I can’t stay here. I’m gonna drive.”

“No you aren’t. I got the troops moving. Every car’s on, everybody’s looking.”

Eddie was right. Flynn’s going off into the night wasn’t going to help anything.

“Who comes in through an alarm system?” Eddie asked.

“You drop time on any professionals? Time that they may have served?”

Cops were routinely informed when their collars were released from prison. “Nobody.”

“You know my collar history.”

“Yeah, you got a fair number, buddy. Some bad’uns.”

“Nobody special, Eddie. Nobody—” He gestured toward the emptiness of the house. Another wave of fear was hitting him. He imagined Abby being tortured, buried alive, raped.

He wanted to run through the streets calling her name. He wanted to drive and drive, searching every crack house, every flop, every crib he knew. She was out there right now. Abby was out there and suffering
right now
.

Detective Charlie Mullin came in. “Where are we?”

“Doing an APB,” Eddie replied. “Get me a picture.”

Flynn strode across the living room and grabbed the photograph that stood on the mantel. It was a studio portrait taken two years ago, for her father while he was dying in St. Vincent de Sales, choking out his lungs, poor damn guy with his cigarettes and his unfortunate opinion that the dangers were overblown.

Eddie put the picture down under a lamp and took a few shots of it with his cell phone. He then took a verbal description from Flynn and inside of three minutes the all-points bulletin was appearing on police computer networks all across the state.

Flynn knew the statistics. Every hour that passed, it was less likely that she would be found.

“You have any idea when this happened?”

“I might.” He went to the side table in the hall and dug out the alarm system’s instruction book. “The system might tell us the last time it was disarmed and rearmed.” He glanced at Eddie and Mullen. “He had the code. Had to have.”

“Who had it?” Mullin asked.

Flynn shook his head. “Me and her, far as I know.”

“No brothers and sisters. My mom and her folks have passed. My dad doesn’t have it.”

“Unless she gave it to somebody, which I very much doubt.”

“She didn’t,” Eddie said. “She was way too smart and too careful.”

Flynn input his code, then followed the instructions. In a moment, the answer appeared on the system’s LED screen. “Three thirty-two,” he said. Then the next figure flashed, the time it had been re-armed. One minute later. “This can’t be right,” he said.

“Within the minute. Three thirty-three.”

There was a silence. Then Mullin said, “We need an inventory, Flynn.”

“Somebody came in here and took her in under a minute? Who would that be?”

Eddie held out his hands, palms up. “Hey, I got the county choppers up. I’m goin’ all out, Flynn.”

This was a small police force in a small city, with a compliment of just thirty personnel. They liked to think that they were good, but at the same time, there were a limited number of challenges. A murder every six weeks or so, a meth lab or crack house a week on the south side, a thin but steady stream of family disturbances, assaults, burglaries and robberies.

“I gotta admit, I can’t remember the last time we had a kidnapping,” Eddie said.

“Nineteen ninety-six. Kid named Angela Dugan, fifteen years old. Turned out to be her boyfriend. They were brought back from Tijuana—married.”

He didn’t. “Let’s canvas,” he said. “Before people take off for work.”

It was cool and still outside, the silence broken only by the busy clatter of lightbars left running. The morning star hung low in a blood-red eastern sky. Up and down the street, lights were coming on. Across the street, Sarah Robinson stood on her front porch in her robe, her arms crossed on her chest.

Flynn gazed across at her. “She and Abby are planning to have their babies together.”

He started across the street. “She hadn’t said anything.”

In times of extreme stress, details come crowding in, the crisp scent of the air, the soft crunch of grass under your sneakers, the distant pumping clatter of one of the county choppers patrolling above the silent streets.

“Are you guys okay?” Sarah asked, her voice constricted, her smile choked back into her face.

“Did you see or hear anything?”

She shook her head. “The cars woke me up. Let me get Kev.”

“I’m here,” Kevin said, coming out from behind her. “Same story from me. Nothing.”

They did the Monteleones, got nothing but sadness from this gentle, elderly couple.

“The next house is Al Dennis,” Flynn said. “He’s often up at this hour. I’ve seen his lights on when I come in off night duty.”

This time, though, Al had been sound asleep, and he came to the door bleary and blinking, pulling a terry-cloth robe on over his pajama bottoms.

“Al, Abby’s missing. She’s been kidnapped. We’re trying to find out if anybody noticed anything unusual during the night.”

“Lights, voices, a vehicle passing the house more than once, anything like that.”

Flynn saw him look into himself, a sign that detectives come to know, that somebody is genuinely searching their memory.

“Lights about three. A car out there.” He gazed at Flynn. “I thought it was you, Flynn.”

“I just assumed it was you coming off duty. I guess it was like, you know, the car stopped there. At your place. I didn’t hear your garage opening, though. I do remember that.”

“Did you see the car?” Eddie asked.

Dennis shook his head. “Sorry. I just—a car came up and stopped.”

“Did you hear it pull away?”

Again, he shook his head. “I got the impression the lights had gone out. Like I said, you coming home. That’s what I thought.”

“After three. In there.”

He’d heard the car but hadn’t seen it. “Do you remember anything about the engine noise? A large car, maybe? A truck? Could you tell?”

The Dark Design by Philip José Farmer
"There Are Things I Want You to Know" About Stieg Larsson and Me by Gabrielsson, Eva
I Am The Alpha by A.J. Downey, Ryan Kells
The Grub-And-Stakers Pinch a Poke by Alisa Craig, Charlotte MacLeod
Wolf Creek Father (Wolf Creek, Arkansas Book 3) by Penny Richards
Lawful Escort by Tina Folsom
Robin in the Hood (Robbin' Hearts Series Book 1) by Diane J. Reed
Laney by Joann I. Martin Sowles
The Journey to the East by Hermann Hesse
The Pleasure of My Company by Steve Martin