Read The Death of Promises Online

The Death of Promises 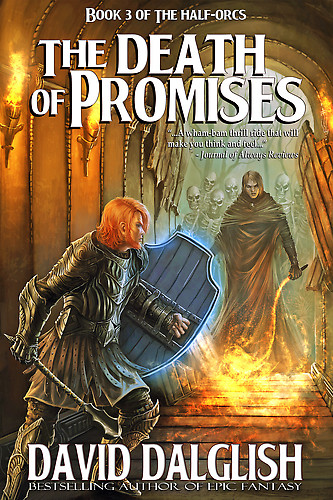 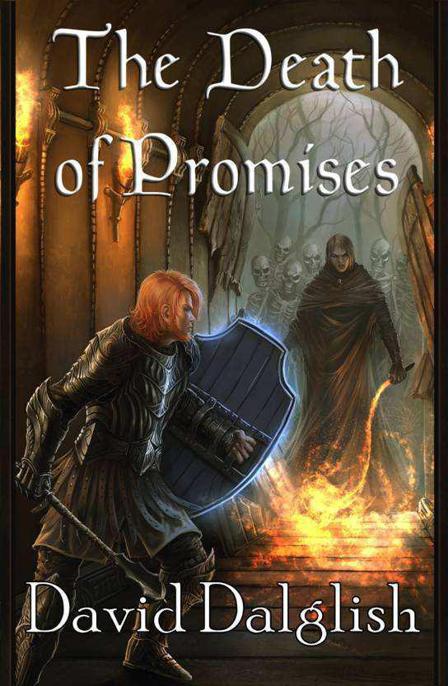 Mira dreamt of a field of roses, the vibrant red petals swaying in a soft breeze. A small patch of grass in the center was her bed. The sky was clear. Everything was at peace.

It’s waiting for you,
she heard a voice say.
Everything is well. The mirror must be shattered, Mira.

She saw a dagger appear, floating above her breast in the hands of an unseen assailant. It twirled and then plunged into her heart. She felt no pain. Peace, pure peace, flooded her.

A shadow fell across the land. Heavy rain clouds covered the blue sky as the roses wilted and died. She heard their cries, a swan song of crimson petals. A hand shimmered into view, still clutching the dagger. Crawling upward, the shimmer revealed more and more of her attacker. Mira saw a shadow twin of herself holding the dagger. She remembered the mind she had touched, the chaotic being that had heard her psychic pleas.

“Tessanna,” she said, her voice a whisper. Thunder rolled through the clouds.

“Shattered,” said the other girl. With a gruesome cry, she twisted the dagger and tore it through flesh.

The Weight of Blood

The Cost of Betrayal

The Death of Promises

The Shadows of Grace (coming soon)

P
atient devil, aren’t you?” Jerico whispered as he knelt by a shallow stream running through the rocky terrain. He scooped handfuls of water and drank, doing his best to forget that the orcs often urinated along the banks. The last tribe he had seen was downstream but the gray scoundrels bred like rabbits in the Vile Wedge. Most likely hundreds of orcs had relieved themselves into that very same water far upstream…

He spat out what little he had not swallowed.

“Well, now I’m thirsty, sick, and still annoyed as the abyss,” he said. He shifted his left shoulder, adjusting the leather straps wrapped around his forearm. A thick rectangular shield hung across his back, emblazoned with the emblem of the golden mountain. That shield, protecting nearly every vital part of his body, kept him calm enough to keep his back turned to his unknown stalker.

He looked past his broken reflection in the water. For two days he had felt a gentle voice of warning in his mind. It was the voice of Ashhur, his beloved deity, the one he served in full devotion despite what had happened. Despite the fall of the Citadel. Despite believing himself the last paladin of Ashhur. He had survived longer than the others had because Ashhur’s voice was strong in his ear and he never doubted it. This time it screamed that death followed him like a shadow.

“You’re no orc,” he said aloud, his patience tiring. He hadn’t slept in nearly two days. “You’re too patient for an orc. So stop hiding. If you want to kill me, come and try. You want to talk, come and talk. If it’s neither, then please go with Ashhur’s blessing and leave me be.”

“I do not think Ashhur would ever grant me his blessing,” came the reply from behind him. “For I have killed too many of his failed, faithless children.”

The paladin stood. The voice was too far away to be within striking distance…yet.

“Another dog of Karak, I assume?” he asked.

“My name is Krelln, worm. I’ve killed three just like you. Weak in faith. Afraid. Did you think you could flee to the Wedge and hide amidst the orcs and the ogres? You don’t much look like a goblin, failed paladin.”

Jerico turned and faced his mocker. A young man, even younger than he. Such a shame to see souls corrupted so early, Jerico thought. He wore heavy platemail akin to Jerico’s, except Krelln’s armor was black and charred as if it had come from the bowels of the abyss.

“Failed paladin?” Jerico asked, scanning the young man’s face. Scars lined every inch of it. “A bold claim considering you’ve never met me before. What did I fail?”

“Twice I have seen you grab your mace and not once has it glowed. Your faith in Ashhur is nothing.” He drew his blade and held it with both hands. It was enormous, with a serrated edge and a carved lion head as a hilt. Black flame rolled up and down the length of steel. “As you can see, my faith remains strong.”

Jerico laughed, shifting his left hand in the straps that held his shield tight across his back. One pull and it’d be at the ready.

“Do you plan on killing me, dark paladin?” he asked.

“Your head will be a grand gift to his majesty. Keep still your weapon and I will be merciful.”

Krelln charged across the yellow grass. He swung his blade with all his strength. Jerico took two steps back, drew his mace in his right hand, and smoothly parried the curved tip of Krelln’s sword. A grin crossed his face.

“Should save your strength,” he told the younger man. The second swing came straight down, trying to cleave the paladin in half. Jerico took a single step to the side and let the attack smash a deep indent in the ground. The black flame charred the grass around it.

Jerico twirled his mace in his hand, his shield still carefully tucked across his back.

“You don’t have the faith to fight me,” Krelln snarled.

“And you don’t have the skill to fight me. Go back to where you came. No one has to know you found me.”

The dark paladin spat onto his blade. The saliva sizzled in the flame.

“Confidence is nothing. Faith is everything.”

“Is that so? Let’s find out.” Jerico hooked his mace to his belt and stood unarmed. “Try to strike me down. I won’t draw my weapon. Your sword will falter.”

Krelln glanced about, suddenly nervous. He suspected a trick but didn’t know what.

The dark paladin licked his lips. His hands shifted their grip on the sword hilt. Jerico watched it all, waiting. Waiting.

Jerico yanked with his left hand, freeing his shield. He took a step closer, thrusting his shield into the path of the blade. Right before the blow connected, the metal of Jerico’s shield burst with brilliant white light. Krelln cried out as his eyes burned. When the sword struck, he felt his arms jolt in pain. A loud crack echoed in the valley. It was as if he hit a stone wall. Jerico shoved aside the blade and approached, still unarmed. Krelln thrust, only to have it blocked. The contact jarred his arms and shoulders. He felt his heart skip and his lungs quiver. The black flames on his sword dwindled to a shadow of their former size.

“Your faith is untested,” Jerico said, lunging forward, his shield leading. Krelln swiped upwards, a desperate defense. The paladin met it with the bottom edge of his shield. A soft cry of pain escaped Krelln’s lips. Sparks showered the ground. “Untested, and built on anger and ignorance. You say you’ve killed three of my brethren; I’ve killed nine of yours, Krelln.”

The young man tried to lift his blade but his arms refused to move. Jerico kicked it from his hands. Krelln staggered back, terrified of making contact with the awful glowing shield.

“The others will find you,” he said, his voice growing hoarse with fear. “Once Krieger finds out Lathaar isn’t the last, he’ll hunt you down and make a necklace from your guts.”

Jerico halted where he stood.

“Who is Lathaar?” he asked. Krelln tried to flee. Before he could take a step, Jerico slammed his shield deep into his back. The dark paladin screamed as his cursed armor melted. He collapsed, his face smashing hard on the dirt. Smoke sizzled as the melted metal burned his flesh. He felt a foot press atop his back amidst the pain and the heat.

“Tell me, who is Lathaar?” Jerico asked again.

“I don’t know,” Krelln gasped. “He’s…he’s just another paladin. We thought he was the last.”

“Another paladin of Ashhur,” Jerico whispered. “Lord be praised…another lives.”

He lifted his foot. The man squirmed to a stand and glared. Blood ran down his face from a broken nose. His hair was disheveled, and he weakly sucked in air while clutching his numb arms to his chest. Jerico waved him away.

“Bastard,” Krelln spat before turning to run. Jerico watched him for a few seconds before unhooking his mace.

“Three good men died to his hand,” he whispered to it. “Fly true, Bonebreaker.”

He flung the mace end over end through the air. It struck Krelln in the back. The powerful magic within the weapon activated. White light flared, and then Krelln’s spine shattered to pieces. He fell limp, making only a soft, confused cry before death took him. Jerico slowly walked over and retrieved his mace.

“Karak take you in his arms,” he said while kneeling beside the body. “And after an eternity may Ashhur forgive you and save you from that fate.”

He buckled the mace and his shield and then prepared to dig. He would leave no man, not even a dark paladin, to be feasted on by the carrion creatures. Besides, he needed time to think. Things had changed. After all the years, the nightmares of the Citadel falling and the brutal battles with dark paladins that sought total victory against his kind, he suddenly knew he was not alone.

“Lathaar,” he said, repeating the name Krelln had spoken. “Where are you now, Lathaar? How have you lasted when all others have fallen?”

Well, not all others,
he thought. He had survived, and there was nothing special about him.

“I guess that’s not true,” he chuckled, patting his shield before digging with his hands.

It took the rest of the day to bury the corpse. It was hard work, but he was used to such things. At the setting of the sun, he decided it was time to leave the Vile Wedge.

“Forgive me, Ashhur, if I endanger your priests,” he told the last sliver of light falling behind the horizon. “But I must go to the Sanctuary. I must find him.”

As darkness came, he felt the gentle touch of Ashhur on his heart and knew the path he had chosen was the correct one. That didn’t mean it would be easy, or guaranteed to succeed. But it was the right path, and he held faith in Ashhur’s guidance. In the end, that was what truly mattered.