Read All Balls and Glitter Online

All Balls and Glitter 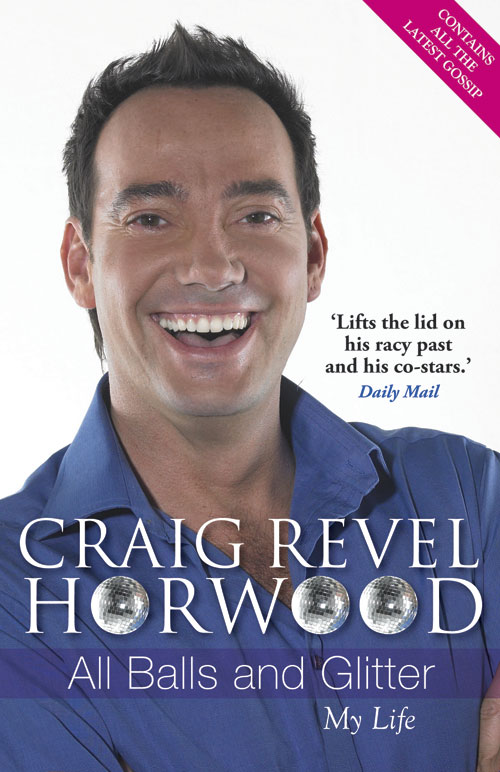 Praise for
All Balls and Glitter

‘Reading Craig’s bizarre but heartbreaking life story, he’s
more stiletto in the glitter than stig in the mud.’

‘Craig Revel Horwood is always more than happy to tell it
like it is – and he’s done just that in his autobiography.’ 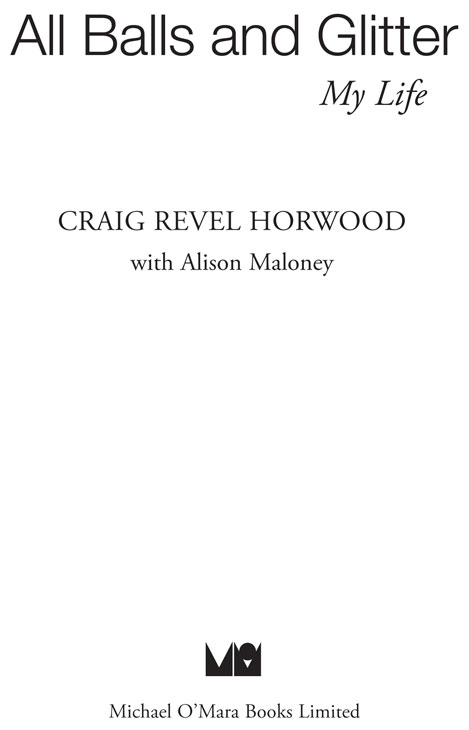 First published in paperback in Great Britain in 2009 by

The right of Craig Revel Horwood to be identified as the author of this work has been asserted by him in accordance with the Copyright, Designs and Patents Act 1988.

All pictures courtesy of Craig Revel Horwood, and reproduced with his kind permission.

Every reasonable effort has been made to acknowledge all copyright holders. Any errors or omissions that may have occurred are inadvertent, and anyone with any copyright queries is invited to write to the publishers, so that a full acknowledgement may be included in subsequent editions of this work.

Designed and typeset by E-Type

Jacaranda and the Heartbreak Hotel

The Greatest Love of All

I’d really like to thank my family for being brave and supporting me in the content of this book. I know how hard it must have been to relive some of the experiences we have shared, both good and bad. The fact that there were incidents of which we were not all aware and have learned only through reading the book cannot have been easy.

I have not written
All Balls and Glitter
to offend anyone, but simply to explain how each and every person can touch your life, no matter how large or small the involvement or part they play in it.

I believe that you meet certain people at certain times for a reason – and that’s to learn something more about yourself, so you can gain a better understanding, not only personally, but socially; how to respect the views and opinions of others to make the world in which we live a better place.

I’m grateful to everyone who has helped me to see me as I am. I pray that my honesty continues throughout my life – and doesn’t get me into too much trouble!

Alison, without you, this book would be illiterate. Thank you for your organization skills.

To all the beautiful people I have mentioned in this tome, my sincere apologies, and thanks for making my life so special and rewarding. Life, it seems, really is what you make it and we continue to learn and grow every day.

A special thank you to Grant, the man I love: the poor bugger has been thrown in at the deep end!

L
avish stood on the stage at the Comedy Club in Adelaide, exhausted but exhilarated. She’d been working at the theatre all day and gone on to the club afterwards, but her act had been amazing. The crowd had loved the tap, the trumpet and the fabulous voice, and had roared as the dancing diva went into ‘Greatest Love of All’. Now they were screaming for more.

The gigs were getting increasingly frequent and the stage managers were willing to pay top whack for more songs, but somehow it wasn’t enough. As she faced an adoring audience and delivered her finale, she lapped up the applause and smiled her most engaging smile. And all the time she was plotting her own demise.

Like many of the beautiful and talented, Lavish was always destined to die young. That moment had come. It was Craig’s turn to shine.

By the time I decided to kill off Lavish, my glamorous alter ego, we had been together for two years.

As an aspiring and hugely ambitious twenty-year-old dancer, I soon got sick of being stuck in the chorus line where I felt my true potential was being missed. I was always the understudy to the leading characters, but I never got to play them straight off. I wanted to be different.

I had already seen myself in drag when I’d dressed up for the Miss Alternate pageant in Melbourne in 1982. I’d looked pretty
hot. Never being one to set my sights too low, I now thought, ‘Maybe I could be a drag pop princess or an androgynous singer like David Bowie.’

It was the eighties and Culture Club were huge, so being in drag didn’t seem a big deal. I saw an interview on the telly with Boy George and he was so honest and open: a great inspiration. Unlike most people in the public eye, who appeared fake to me, he stood up for what he believed in and said, ‘Yes, I like wearing lipstick. Yes, I look good.’

I decided to go for it. At the time, I was dancing every night in high heels in
La Cage aux Folles
, so I was halfway to being a drag act anyway. Creating an alter ego would be a fitting way of exposing my other talents. Lavish was born.

It was Danny La Rue who had nicknamed me Lavish when I was touring with him (which he and all my other friends frequently shortened to ‘Lav’). That, naturally, became my drag name. The character was simple too. She was a glamour puss who couldn’t stop singing and dancing, and she loved doing cover versions of Whitney Houston songs. I was never going to sing like Whitney, and I certainly couldn’t look like her, so I had to develop my own style.

For the image, I didn’t need to go far. This was the
Dynasty
era, so I set about recreating that Joan Collins allure: sparkle and extravagant fashion were a must. I copied Joan’s make-up and found myself an emerald-green dress with the perfect design: long sleeves to cover my hairy arms, and massive eighties shoulder pads. I finished the look with open-toed courts complete with six-inch stiletto heels – fabulous! What a dazzling, talented creature I had created. She was nearly seven feet tall in those shoes, with wild auburn hair, and was extremely popular on the drag circuits.

Lavish didn’t need much patter because she had a belter of a singing voice and always performed live. Drag queens were all the rage in Australia at the time, but they were all miming – it was
like
The Adventures of Priscilla, Queen of the Desert
– so Lavish’s version of ‘Greatest Love of All’ was legendary. Other favourites were ‘I Am Woman’,
the Helen Reddy classic, and ‘You Gotta Have a Gimmick’, which is usually performed by three women, but Lavish did all the parts: playing the trumpet, tap-dancing and ending with a sprinkling of ballet into the splits. She would execute a series of dramatic
fouetté
turns and then, with a big bang, slide into the splits on the cymbal crash.

The act went down a storm and the clubs were clamouring to book her, for more money each time. At the end of every gig, they’d ask for more songs for more cash too, so, for a while, it was all going to plan.

By the time she really took off I was in a show called
Sugar Babies
in Perth, Western Australia. I’d perform until about 10.30 p.m., then I’d get dressed and leave the theatre as a woman, lugging my trumpet, my backing tracks, microphones and cables. I was dragging myself around in more ways than one!

Eventually, Lavish’s popularity became the bane of my life. It was good experience, but she was so successful on the drag circuit that people only wanted me as her. The whole thing was becoming a chore.

Then came the clincher. After the act one night, an audience member came and knocked on my dressing-room door. I let him in.

‘I saw you in
Sugar Babies
and I think you’re wasting your time doing the drag thing,’ he said bluntly. ‘You were fantastic. You should be singing as a man, not a woman.’

I’d fallen in love with the adoration of the crowds and all the screaming, and had not really been contemplating what I was doing. This guy made me stop and think. Whoever you were, thank you – you were right. Lavish had to go.

Deep down inside, I had probably known for a long time that I couldn’t keep trawling round these tragic clubs. I suppose I could have taken the character further, but I would have ended up doing
it for a living, like Barry Humphries or Danny La Rue, having to put on all this clobber every time I wanted to perform.

As soon as my run in
Sugar Babies
finished, Lavish and I said goodbye. She was last seen at 7 a.m. on 1 November 1988, after an all-night Halloween bash, walking up the Champs-Elysées in Paris with her heels off and getting on the number 31 bus with Tina Turner (not the real one, of course). She ended up at
la Tour Eiffel
and was never seen again.

I miss her, from time to time, but Lavish was never destined to be old. I suppose I miss her youth and beauty most of all. If you paint your face, the canvas changes and moves with age and you can’t achieve the same look, so she would have been a sad state now.

Years later, when I was in
Miss Saigon
in London
,
Lavish was invited to a birthday party, but I really didn’t want to revive her. Instead, I went as Lavish’s heroin-addict sister. She had beard growth, a messy blonde wig, the same green dress and hairy legs with no tights. The make-up was big dark circles round the eyes and smeared lipstick. She was rough as guts.

As the drugged-up sibling, I announced Lavish’s untimely death to the gathered throng and so she was finally laid to rest.

The real roots of Lavish can probably be traced back to the small town of Ballarat, Victoria, in Australia, where I was born and where, after much moving about, my family finally settled.

In our dress-up box at home we had a synthetic platinum-blonde wig, which was actually not a wig at all, but one of those swimming caps for women with hair on it. I used to put that on all the time, along with various absurd outfits, and then I’d do a little show for everyone. There were frosted-glass, double sliding doors in our living room that created a perfect central entrance for me because I could start my act behind them, then dramatically slide them open for a tantalizing reveal.