Read All the Gates of Hell Online

All the Gates of Hell 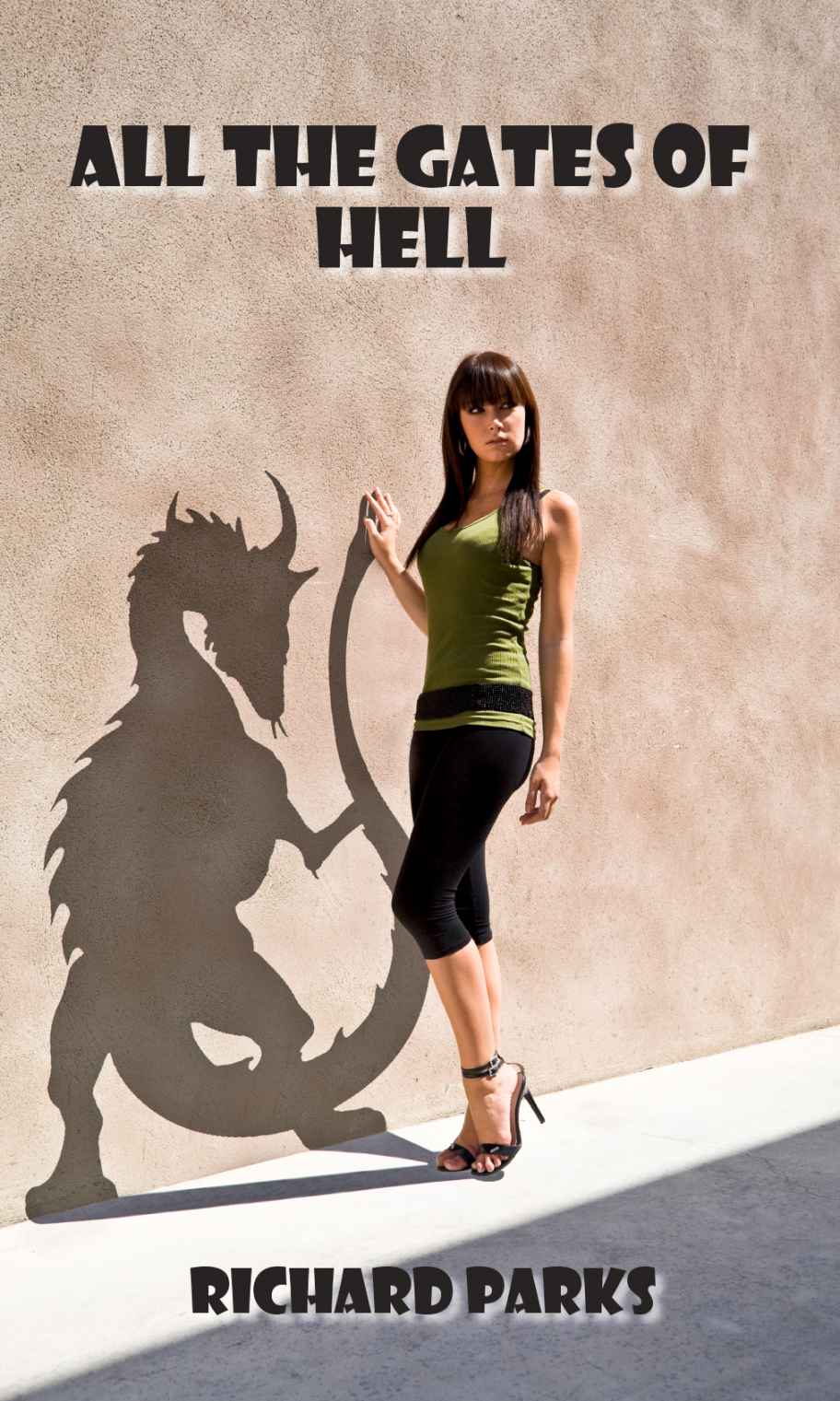 All the Gates of Hell

On the morning of Jin Lee Hannigan's apotheosis she sat in her cubicle looking over one more in a seemingly endless stack of client's eviction notices when her boss, Joyce Masters, peered out the window for the third time in as many minutes.

"Your stalker is back," she said.

Jin didn't even glance up from the forms. "You mean Teacher?"

Jin yawned and stretched. She brushed her hair out of her eyes and glanced toward the window. She saw Teacher Johnson standing on the corner by the florist shop. There was a young man in a leather jacket just beyond that, leaning in the entrance to an alley. "That's Teacher, Joyce. You know him," she said. "But who's that other guy looking this way?"

Jin looked, but the young man was gone. She shrugged. "Don't see him now. Anyway, we're talking about Teacher here. He's harmless. Been hanging around downtown for years. You know that."

"That's why I'm worried--I've noticed something different about him lately. He's
watching
you. He never did that before."

"Have you taken a good look at the poor guy? I could break him in half if he tried anything."

Joyce glanced toward heaven. "Oh, to be young and ignorant and have that 'never gonna die' feeling again. Just be careful, ok? I'd consider it a personal favor."

"So. You going to see Jeff tonight?"

Jin sighed. "Not tonight or any other night. We broke up."

Jin just shrugged. "He wanted to sleep with me. I wanted him to not want that. Neither of our needs was being met."

Joyce just shook her head. "For someone who is both straight and as cute as a china doll, you got some strange attitudes about men. Or maybe you're just having a streak of bad luck. Jeff was...what? The third one this year?"

"Yes, and thanks so much for reminding me of the sorry state of my love life," Jin smiled wistfully as she turned her attention back to the eviction notices. Later that afternoon she checked her email to find this note from her mother:

SUBJECT: THE FORCES OF EVIL

I'm going to India for a week with my new boyfriend. Or maybe a year. We're going to stop the violence, or try to. And, by the way, you were too good for Jeff in the first place. Even if he was a cutie.

At first Jin could only think, what new boyfriend? She finally sighed. There had never been much point in worrying about her mother, Kathleen Margaret Hannigan. Just because there was no point to worrying didn't mean Jin wouldn't, of course, but there really was no point -- her mom did what she was going to do, always had, and always would so long as she drew breath.

Joyce started to say something, but finally just shook her head, looking mildly annoyed. The waiting room was full up today and there wasn't much time, apparently, for nagging. Jin was almost grateful, but not quite. She glanced at her inbox and sighed gustily. The mountain never seemed to get any smaller. When she looked up again Joyce was standing at her desk and it was almost half past six.

"Sorry we were so late today. I've got a meeting of my tenant association in fifteen minutes. Can you lock up?"

Just before she disappeared out the door, Joyce frowned. "He's still not there."

Jin didn't have to ask who she meant. She took a moment to glance out the door herself before she went to wash out her coffee cup and fetch her jacket. The curb by the florist's shop was empty, and the florist shop itself was already closed. This late in the day, most of Pepper street would already be shut down for the night.

Jin couldn't get the thought out of her mind -- Teacher Johnson was supposed to be on that corner from around four-thirty to seven o'clock. You could almost set your watch by it; he was always there when he was supposed to be there. Only now he wasn't. It was simply wrong; there was a rhythm, an ebb and flow to life on Pepper Street. Jin had come to think of the area downtown as home, and something in her home wasn't right. She had a sudden image of Teacher lying broken and bleeding in some dark place, and she shivered.

"It's nothing," she said aloud, and to no one in particular. The evening was getting chilly; fall was in the air. Jin shut the door of the Legal Aid office behind her and listened for the click of the lock. Then she stuck her hands in the pockets of her jacket and started up Pepper Street. Every now and then she heard a faint whisper, like the multitude of whispers she'd imagined hearing for the last few days. But this one was different.

Jin stopped. This sound wasn't just in her head; it was an actual sound and it came out of the alley by the florist. "Teacher, is that you?"

Jin looked into the darkness of the alley. "In there? How stupid do you think I am?"

There was no answer. Jin reached for her cell phone before she remembered that it was at home, recharging in its cradle, right where she left it. She looked around. No one was about. The door to the Legal Aid office locked when she closed it, and Jin's key was on the same ring as her car keys, likewise at home because she didn't need them. The one pay phone was three blocks away and didn't work anyway.

The safe, smart and logical thing to do would be to head for home and call for help from there. Only doing the smart thing could mean that Teacher bled to death before anyone got there. Assuming, of course, that he was telling the truth. Jin groaned. "Ohhhh...how stupid am I?"

She went to the entrance to the alley and looked more closely, but still could see nothing. "Teacher, I swear if this is some trick I'll break your scrawny neck!"

Teacher's voice was weaker; she could barely hear him. Jin just shook her head. "I'm this stupid, obviously."

Jin entered the alley. The sun had already set and the buildings blocked most of what light remained. Jin waited a few moments for her eyes to adjust to the gloom before she went any farther.

Either Teacher was barely alive or he was further away than Jin thought at first. Fortunately there weren't any cubbyholes for an attacker to hide in. There was a side door to the florist's shop but it was padlocked and reinforced with steel; no one was hiding there. Jin slowly moved down the alley but, even after her eyes adjusted, there was little more than gloom for a while. Then ahead of her the passage began to lighten a bit. It was a strange, flickering sort of light, like torches. Jin stopped. Something was definitely wrong. She turned around and faced a stone wall.

The alley going back to Pepper Street was totally blocked by a wall of large granite blocks, more appropriate to a moldering castle or ancient city wall than an alleyway. When Jin looked carefully to either side there was no brick visible, just more plain stone blocks, up to a height of about ten feet. Above that, spaced at regular intervals for the short distance she could see, there were niches carved into the stone. A figure was carved into each niche in bas relief. In the poor light Jin couldn't quite make out their features and, the harder she tried, the more she realized that, perhaps, she really didn't want to. She got an impression of weapons, distorted bodies, fangs and fire.

Jin knew she had seen something like it before, and it took her a few moments to realize that the carvings had at least a passing resemblance to a type she had seen carved into a Buddhist temple she had once visited with her mother, when Kathleen was going on one of her periodic "try this other religion for a while now" phases. Yet Jin was pretty sure there had been no temple down that alley when she'd passed it that morning. It simply wasn't possible that this place was here now. Yet here it was, and here she was and, apparently, wasn't leaving the way she came. She reached out and touched the stone. It felt cold and hard beneath her fingers, and very real.

There was no answer, no more faint voice calling out to her. There was just cold stone, and darkness, with that one flickering promise of light ahead. Jin headed in that direction.

It occurred to Jin as she walked that she was taking the strangeness of the situation with remarkable calm. She wondered if this was a good thing, or a sign that she was simply numb with shock and the hysterics and collapse would soon follow. She shrugged. She didn't feel particularly hysterical, or wobbly in the knees, or anything that suggested a crash was imminent. Rather, there was a sense of
inevitability
about being trapped in a strange stone passage in what had appeared, in all the years she had known the place, simply a back alley off Pepper Street in the city of Medias, Mississippi. She couldn't explain the feeling, but she clung to it. For all she knew, this delusion was all that was keeping hysteria at bay.

The passage ended abruptly at a thick wooden door, now slightly ajar. Jin pushed it open and, in that moment, wondered if delusion would be enough.

Jin stood at the entrance to a vast cavern, so tall she could not see the ceiling, so wide that it was hard to see clearly from one end to the other. The air in the cavern was cool, and smelled of sandalwood and smoke. Flanking the doorway on either side were two massive stone figures. One was a demonic-looking creature holding a club, the other a fierce armored figure that was possibly intended to be human, but its features and posture were so distorted that it seemed like something out of nightmare. It wielded a sword at least twenty feet long. Amazing as these figures were, they were only able to hold her attention for a moment, for beyond them she saw something even more astonishing.

In the center of the cavern was a raised dais at least sixty feet across, and in the center of that were a group of three statues. The ones on either side of the main figure were easily ten feet high, one male and one female, but it was hard to tell much else about them. Between them stood a female figure taller even than the guardians at the entrance. She stood on what Jin recognized as an open lotus blossom, similar to the one tattooed on Jin's upper arm; she bore a vessel that looked like an old-fashioned sake' bottle cradled in her left arm, and her right hand was raised in a sign of blessing. All three of the statues shone like gold, and before them smoke rose from iron braziers.

"Got it in one, Jin," someone shouted.

Teacher Johnson stood just in front of the dais between two smoking braziers taller than he was, grinning like a Cheshire cat, especially such a cat who has just eaten or is about to eat your favorite parakeet. Jin turned around only to confront a solidly closed door.