Read All The Stars In Heaven Online

All The Stars In Heaven 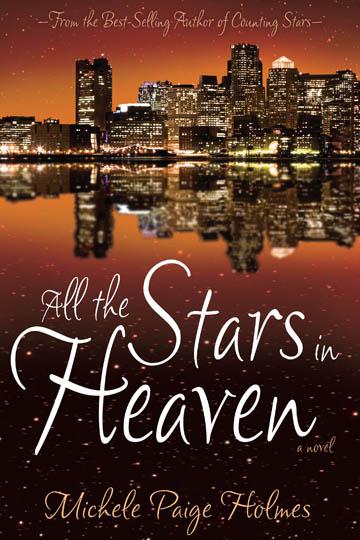 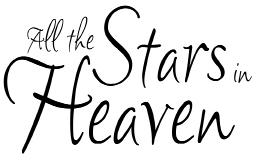 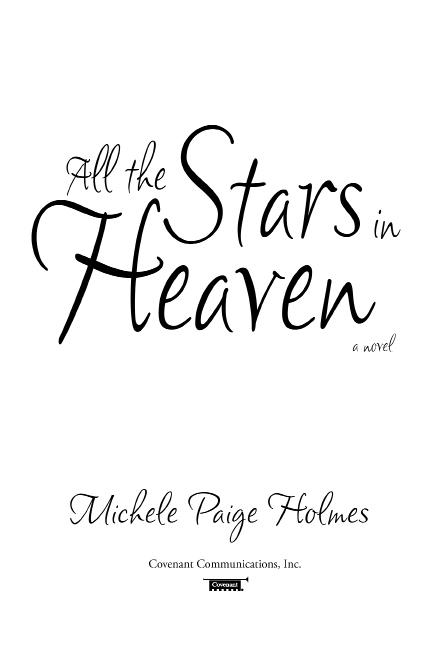 This is a work of fiction. The characters, names, incidents, places, and dialogue are products of the author’s imagination, and are not to be construed as real.

To all those who have found the strength to change and the courage to stay strong.

“Hurry up, Sarah.” Grant Morgan lifted the collar of his overcoat as wind whipped through the cemetery, causing the twenty-eight-degree temperature to feel even colder. Frowning, he looked down at the little girl standing three feet in front of him with her thin sweater, short dress, and bare legs. The child wasn’t shivering, wasn’t moving at all, despite his attempts to get her going and this over with.

He looked around uneasily, wondering if the feeling that he was being watched was ever going to leave. He tried to shrug the worry away but, like the cold, it seemed to have seeped through his coat, through the pores of his skin, into his soul.

Another gust of near-arctic air swirled past them, stirring up the late-fallen leaves at their feet. The wind ruffled the back of the child’s dress, and Grant detected the slightest movement from her—an involuntary shiver as the cold danced around her legs.

So, she is human,
he observed, feeling both relief and regret at this hint of vulnerability. He’d hated that in the few hours they’d been together he’d seen nothing of the lively toddler he’d once known and no sign she remembered him from before the divorce—no possibility of any connection between this sullen girl and himself. But he also realized that a child who displayed such little emotion would be that much easier to deal with.

A corner of the Astroturf lifted in the stiff wind, revealing the cavernous hole in the ground beneath the casket. Grant watched as Sarah leaned forward, then looked back at him, her blue eyes wide with fear and . . . questions.

“I said, hurry up.” He gave her a none-too-gentle push that sent her stumbling forward, her scuffed Mary Janes barely stopping at the edge of the grave. Knees shaking, she continued to clutch a single flower in her hands as she caught her balance. Her small fists were stacked over the slender stem, between two protruding thorns of the blood-red rose. She straightened with natural grace and then stood there with remarkable stillness for a child of only five years.

“Please get her out.” Sarah’s voice, though tiny, was calm and surprisingly full of authority for someone so small. “Roses are her favorite.”

“She’ll wake up when she smells this one.”

Grant felt a stirring of pity. A very dangerous feeling—for both of them. Stepping forward, he plucked the rose from Sarah’s hands.

“No flower is going to wake her up,” Grant said as he tossed the rose on top of the casket. “Let’s go.” He looked down at Sarah and saw the shock on her face. She held her hands open, drops of blood welling on each, where the thorns had pricked her skin. A matching pair of tears gathered in her eyes.

He turned away and walked toward the car, feeling those hurt and betrayed eyes on him the whole time.
Other eyes might be watching too,
he reminded himself as he retrieved his keys from his pocket, opened the door, and climbed inside. A quick glance out the window told him Sarah still hadn’t moved.

He started the engine, put the car in gear, and rolled down the passenger window to call to her. She didn’t come after him, and he watched with growing concern as Sarah turned away from the car and threw herself across the casket, her tiny fingers trying to pry it open.

“Sarah,” he barked. “Stop this nonsense and get in the car.”

Tears tumbled down her face as she looked at him, the imploring in her eyes reaching out across the twenty feet between them to sear his heart. The pity swelled. He fought it, taking his foot off the brake to let the car idle forward.

Sarah turned back to the casket. More anguished cries came from her throat. Grant pressed his lips into a thin line as the car nudged nearer the cemetery gates. The door to the caretaker’s shed was ajar, and Grant wondered if the man—or someone else—was inside watching him.

I can’t just leave her.

His glance strayed to the rearview mirror as he turned the dial on the stereo, pretending to be searching for a station, pretending that he didn’t care about his daughter.

The car rolled halfway through the open gate. Grant’s foot edged toward the brake. He was going to have to go back and get her. He’d be swift, stern. He’d spank her and show anger. But anyone watching would still know he cared enough not to leave her behind. Anyone watching would realize they’d found his new weak link. His hand went to the gear shift as Sarah began running toward the car. Relief washed over him.

Pasting an irritated, impatient look on his face, he put the window up and waited for her.

A second later he cringed as she slipped on the gravel and fell face-first onto the road. His hand automatically gripped the door handle, but—remembering the open door of the caretaker’s shed—an inner restraint stopped him before he could get out and go after her. Returning his fist to his lap, he clenched his teeth and silently counted the seconds it took Sarah to get off the ground and begin walking again.

When his nerves had just about worn thin, she reached the car then spent several seconds fumbling with the handle before her little hands found enough strength to pull the heavy door open. Again, Grant resisted the urge to lean across the seat and help. But when she climbed inside and he took in her bedraggled appearance, he wavered, reaching into his suit pocket for a hanky so she could wipe away some of the bloodied gravel embedded in her knees. He tossed the white cloth at her.

“Clean yourself up,” he said gruffly.

Without looking at him, she snatched the hanky and swiped it across her face. Tugging at her thin, too-short dress, she managed to cover one of her knees. Then she realized blood was also dripping from her chin, and she pressed the handkerchief to the wound. Staying well on her side of the seat, she turned away from him and looked out the window.

The car started forward, and from the corner of his eye Grant studied Sarah’s reflection in the glass. Fresh tears rolled down her cheeks, though she didn’t make so much as a whimper. Her hair was in need of a good brushing, and it hung long and wispy halfway down her back. He thought perhaps tomorrow he would take her to get it cut short; it would certainly be easier to care for. But then he thought of Rachel and reconsidered. Sarah’s golden hair, when washed and brushed, would no doubt be as beautiful as her mother’s had been. It was comforting to know there was something in her to remind him of Rachel.

Sarah shifted on the seat, tugged her dress down again, then removed the handkerchief from her chin and placed it carefully across a four-inch tear down the front of her dress. She wiped a dirty hand across her cheeks, drying the last of her tears, and turned to her father with a positively mutinous expression.

“I’ll feed you shortly, but there will be no kittens at my house.”

“I can’t sleep without her.”

“Too bad.” Grant stopped at a light and caught the driver in the car beside them looking at him.

Unnerved once more, Grant eased the car into the intersection when the light turned green. The car in the other lane moved ahead and turned three streets later. Grant headed toward the Boston University Bridge, thick now with rush hour traffic leaving the city.

Grant heard the desperation in her voice. “We can’t ever go back there,” he said with a note of finality.

“Yeah? Well, I don’t particularly want to live with you either,” Grant lied. He’d wanted nothing more for the past two years than to have his wife and daughter back in his life. Every time he and Rachel had tried to patch things up, their differences became more apparent, but he’d never stopped loving her.

And now she was dead.

“Then take me home.” Sarah’s voice was quiet now.

He glanced across the seat and saw her blue eyes filling with tears again. He suddenly felt helpless. “Listen, Sarah. We can’t go back there because the police won’t let us. They have to look at everything in the house and see if they can find out why Mommy died. How about you tell me what your kitten looked like, and we’ll see if we can find you another one.”

“No.” Sarah shook her head and turned away from him. Her shoulders lifted up and down in a dramatic sigh.

Grant thought he saw her lip quiver again, but she remained silent. His daughter had his wife’s coloring and features, but she wasn’t schooled in how to use her looks to her advantage.
And she never will be,
he vowed. Sarah need never know how beautiful she was. He would keep her away from men. He’d raise her to be strong and sensible.

What am I thinking?
The safest, most practical thing would be to ship her off to a secure boarding school—as far away from him as possible. As he drove, he mulled this over—the pros heavily outweighing the cons—and made up his mind to do just that. For the remainder of the drive he studiously ignored her, focusing instead on his recent job change to the small police department in Summerfield. It was his chance to start over. To keep things honest, simple.

Pulling into the driveway, he cut the engine and looked over at Sarah. Her eyes were closed, and she was curled up in a ball on the seat. Grant got out of the car, made a point of slamming his door, and walked to the box at the curb to retrieve his mail. He shuffled through the envelopes as he came back up the drive, then rapped his knuckles against the car window. Sarah didn’t stir.

So much for not being able to sleep without Kitty.

He stuck the mail in his coat pocket, opened the door, and carefully lifted Sarah in his arms. She stirred for a second, turning her face into his chest.

He froze, a sudden déjà vu overtaking his senses. She weighed next to nothing and still had that same little-girl smell he remembered. It seemed just yesterday he’d cradled her like this when she was a baby.

Setting his lips in a stern line, he walked toward the house, his eyes darting habitually to survey his surroundings. He opened the front door, kicked it shut behind him, and carried her to the couch. He placed a pillow beneath her head and covered her with a blanket, tucking her slender arms underneath.

Stepping back, he watched as her tiny chest rose in a shuddering breath. Her lips puckered for a brief moment, and Grant wondered if she was having a bad dream. Something much more than pity stirred deep inside him, causing his throat to constrict. Leaning forward, he placed a gentle kiss on her forehead.

“It’ll be all right, Sarah,” he whispered, praying it would because he suddenly knew he couldn’t send her away—just as he knew he already loved his little girl even more than he had once loved her mother.