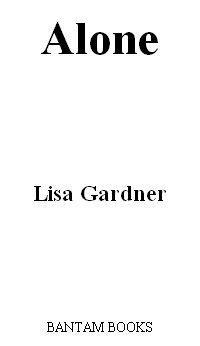 Other books by Lisa Gardner

Excerpt from Love You More

H
E
'
D PUT IN
a fifteen-hour shift the night the call came in. Too many impatient drivers on 93, leading to too much crash, bang, boom. City was like that this time of year. The trees were bare, night coming on quick and the holidays looming. It felt raw outside. After the easy camaraderie of summer barbecues, you now walked alone through city streets hearing nothing but the skeletal rattle of dry leaves skittering across cold pavement.

Lots of cops complained about the short, gray days of February, but personally, Bobby Dodge had never cared for November. Today did nothing to change his mind.

His shift started with a minor fender bender, followed by two more rear-enders from northbound gawkers. Four hours of paperwork later, he thought he'd gotten through the worst of it. Then, in early afternoon, when traffic should've been a breeze even on the notoriously jam-packed 93, came a five-car pile-up as a speeding taxi driver tried to change four lanes at once and a stressed-out ad exec in a Hummer forcefully cut him off. The Hummer took the hit like a heavyweight champ; the rusted-out cab went down for the count and took out three other cars with it. Bobby got to call four wreckers, then diagram the accident, and then arrest the ad exec when it became clear the man had mixed in a few martinis with his power lunch.

Pinching a man for driving under the influence meant more paperwork, a trip to the South Boston barracks (now in the middle of rush-hour traffic, when no one respected anyone's right-of-way, not even a trooper's), and another altercation with the rich ad exec when he balked at entering the holding cell.

The ad exec had a good fifty pounds on Bobby. Like a lot of guys confronted by a smaller opponent, he confused superior weight with superior strength and ignored the warning signs telling him otherwise. The man grabbed the doorjamb with his right hand. He swung his lumbering body backwards, expecting to bowl over his smaller escort and what? Make a run for it through a police barracks swarming with armed troopers? Bobby ducked left, stuck out his foot, and watched the overweight executive slam to the floor. The man landed with an impressive crash and a few troopers paused long enough to clap their hands at the free show.

“I'm going to fucking sue!” the drunken exec screamed. “I'm going to sue you, your commanding officer, and the whole fucking state of Massachusetts. I'll own this joint. You hear me?
I'll fucking own your ass!
”

Bobby jerked the big guy to his feet. Ad Exec screamed a fresh round of obscenities, possibly because of the way Bobby was pinching the man's thumb. Bobby shoved the man into the holding cell and slammed the door.

“If you're gonna puke, please use the toilet,” Bobby informed him, because by now the man had turned a little green. Ad Exec flipped him off. Then he doubled over and vomited on the floor.

Now it was shortly after ten p.m. Ad Exec had been bailed out by his overpriced lawyer, the holding cell was washed down, and Bobby's shift, which had started at seven a.m., was finally done. He should go home. Give Susan a buzz. Catch some sleep before his alarm went off at five and the whole joyous process started once more.

Instead, he was jittery in a way that surprised him. Too much adrenaline buzzing in his veins, when he was a man best known for being cool, calm, and collected.

Bobby didn't go home. Instead, he traded in his blues for jeans and a flannel shirt, then headed for the local bar.

At the Boston Beer Garden, fourteen other guys were sitting around the rectangular-shaped bar, smoking cigarettes and nursing draft beer while zoning out in front of plasma-screen TVs. Bobby nodded to a few familiar faces, waved his hand at the bartender, Carl, then took an empty seat a bit down from the rest. Carrie brought him his usual order of nachos. Carl hand-delivered his Coke.

“Don't let Martha hear you,” Bobby told him. “After watching your wife haul a keg, I don't want to think of what she could do with a rolling pin.”

“My Martha's also a keeper,” Carl assured him. “Mostly 'cause I fear for my life.”

Carl left Bobby alone with his Coke and nachos. Overhead, a live news bulletin was reporting on some kind of situation in Revere. A heavily armed suspect had barricaded himself in his home after taking potshots at his neighbors. Now, Boston PD had deployed their SWAT team, and “nobody was taking any chances.”

Yeah, November was a funny kind of month. Wired people up, left them with no defenses against the oncoming gloom of winter. Left even guys like Bobby doing all they could do just to hold course.

He finished his nachos. He drank his Coke. He settled his bill, and just as he convinced himself it really was a good idea to go home, the beeper suddenly activated on his belt. He read the screen one moment and was bolting out the door the next.

C
ATHERINE ROSE GAGNON
didn't like November much either, though for her, the real problem had started in October. October 22, 1980, to be exact. The air had been warm, the sun a hot kiss on her face as she walked home from school. She'd been carrying her books in her arms and wearing her favorite back-to-school outfit: knee-high brown socks, a dark brown corduroy skirt, and a long-sleeved gold top.

A car came up behind her. At first, she didn't notice, but dimly she became aware of the blue Chevy slowing to a crawl beside her. A guy's voice.
Hey, honey. Can you help me for a sec? I'm looking for a lost dog.

Later, there was pain and blood and muffled cries of protest. Her tears streaking down her cheeks. Her teeth biting her lower lip.

Then there was darkness and her tiny, hollow cry, “Is anyone out there?”

And then, for the longest time, there was nothing.

They told her it lasted twenty-eight days. Catherine had no way of knowing. There was no time in the dark, just a loneliness that went on without end. There was cold and there was silence, and there were the times when he returned. But at least that was something. It was the sheer nothingness, endless streams of nothingness, that could drive a person insane.

Hunters found her. November 18. They noticed the plywood cover, poked it with their rifles, and were startled to hear her faint cry. They rescued her triumphantly, uncovering her four-by-six earthen prison and releasing her into the crisp fall air. Later she saw newspaper photos. Her dark blue eyes enormous, her head skull-like, her body thin and curled up on itself, like a small brown bat that had been yanked harshly into the sun.

The papers dubbed Catherine the Thanksgiving Miracle. Her parents took her home. Neighbors and family paraded through the front door with exclamations of “Oh, thank heavens!” and “Just in time for the holidays” and “Oh, can you really believe . . . ?”

Catherine sat and let people talk around her. She slipped food from the overflowing trays and stored it in her pockets. Her head was down, her shoulders hunched around her ears. She was still the little bat and for reasons she couldn't explain, she was overwhelmed by the light.

More police came. She told them of the man, of the car. They showed her pictures. She pointed at one. Later, days, weeks—did it really matter?—she came to the police station, stared at a lineup, and solemnly pointed her finger once again.

And Catherine Rose returned home with her family.

She didn't eat much. She liked to take the food and slip it in her pocket, or simply hold it in the palm of her hand. She didn't sleep much. She lay in the dark, her blind bat eyes seeking something she couldn't name. Often, she held quite still to see if she could breathe without making a sound.

Sometimes her mother stood in the doorway, her pale white hands fluttering anxiously at her collarbone. Eventually, Catherine would hear her father down the hall.
Come to bed, Louise. She'll call if she needs you.

Years passed. Catherine grew up, straightening her shoulders, growing out her hair, and discovering that she possessed the kind of dark, potent beauty that stopped men in their tracks. She was all pale white skin, glossy black hair, and oversized navy eyes. Men wanted her desperately. So she used them indiscriminately. It wasn't her fault. It wasn't their fault. She simply never felt a thing.

Her mother died. 1994. Cancer. Catherine stood at the funeral and tried to cry. Her body had no moisture, and her sobs sounded papery and insincere.

She went home to her barren apartment and tried not to think of it again, though sometimes, out of the blue, she would picture her mother standing in the doorway of her room.
“Come to bed, Louise. She'll call if she needs you.”