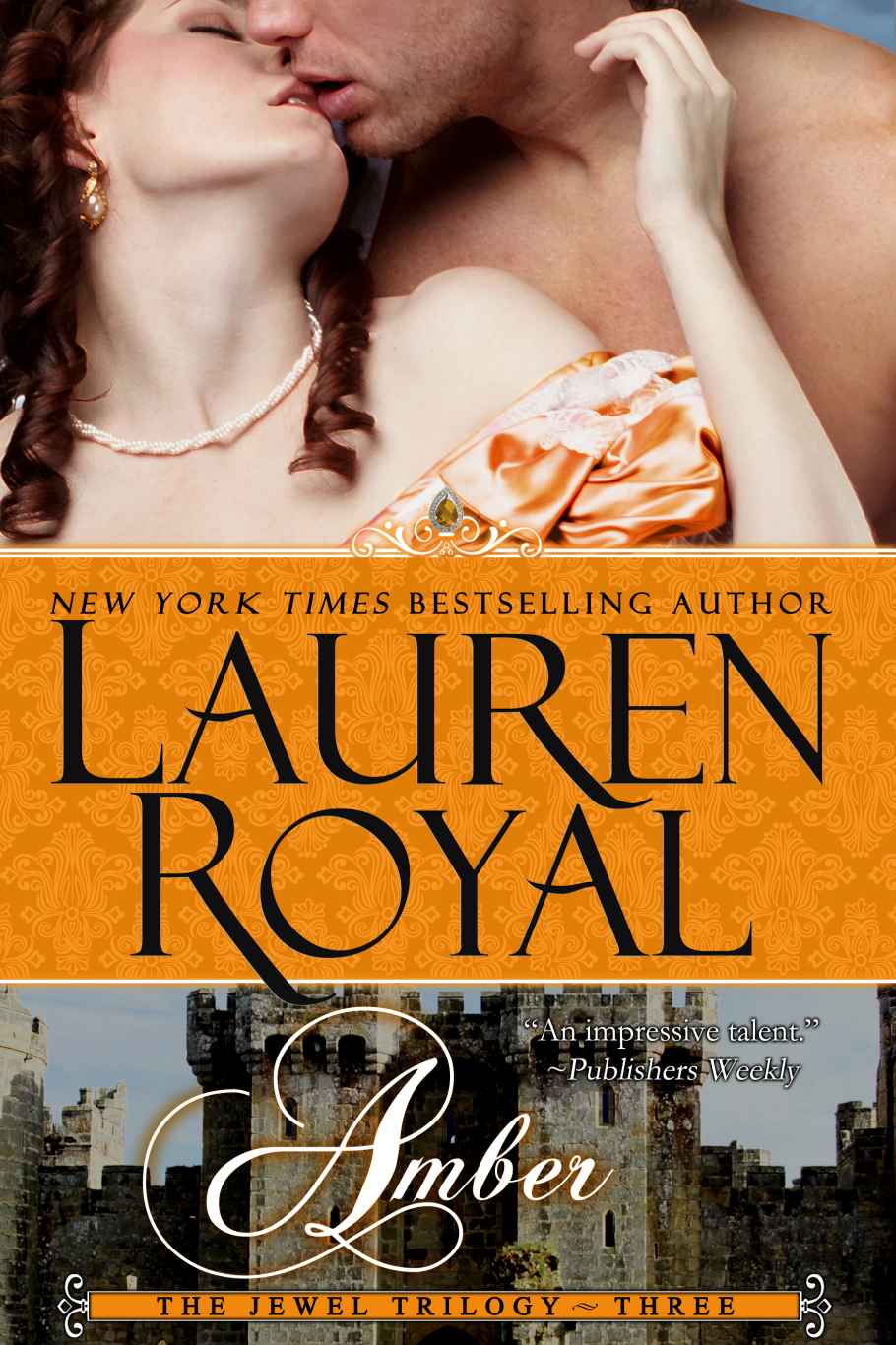 Book Design by
Typesetter For Mac

All rights reserved. No part of this publication may be used or reproduced or transmitted in any manner whatsoever, electronically, in print, or otherwise, without the prior written permission of both Lauren Royal and Novelty Books, except in the case of brief quotations embodied in critical articles and reviews.

PUBLISHER'S NOTE: This is a work of fiction. Names, characters, places, and incidents either are the product of the author's imagination or are used fictitiously. Any resemblance to actual persons, living or dead, business establishments, events, or locales is entirely coincidental.

Authors work months or years on their books and need to feed their families, just like you do.

Learn more about the author and her books at
LaurenRoyal.com
.

TABLE OF CONTENTS
INSIDE FLAP

Kendra Chase's brothers are telling her it's high time she get married. But although they've presented her with many wealthy, titled suitors, no man has caught her fancy—until her coach is held up by a dashing, mysterious highwayman. When she and the dangerous man are caught in a compromising embrace and her overprotective brothers insist they wed, Kendra cannot believe it. Are they really desperate enough to match her with an outlaw?

Patrick "Trick" Caldwell is the Duke of Amberley—and also the notorious Black Highwayman, an identity he has assumed in order to right past wrongs and serve his king. But his already complicated life becomes positively convoluted when he finds himself compelled to marry a red-headed temptress he's only just met. Caught in a web of half-truths and forced into a perilous mission, can Trick extricate himself and find love with the woman destined to steal his heart?

For my children
Brent, Blake, and Devonie,
who have eaten too many frozen pizzas
so that Mom could write

With love and thanks
for enabling me to see the world
again through a child's eyes,
and for always being there
to remind me what's really important

Kendra Chase adored her brothers, except when she wanted to kill them.

"Jason is right," Ford told her as they rattled down the road in a shabby public coach. "You're twenty-three years old, and it's high time you take a husband."

Kendra slanted a glance at the plainly dressed stranger sharing the coach with them. "Not the Duke of Lechmere," she said with an exasperated glare at her twin. "I won't be 'your graced' for the rest of my life."

Kendra's oldest brother, Jason, tried unsuccessfully to stretch his long legs. "And what, pray tell," he drawled in an annoyed tone, "would be wrong with that? I've never understood what you have against dukes." Crammed onto the bench seat between Kendra and his wife, Caithren, he sighed. "I only wish to see you live a life of comfort. Would you prefer to travel this way all the time?"

As if to drive home her brother's point, the springless vehicle lurched in and out of a rut, rattling Kendra's teeth. She gritted them. Though Jason was careful with money, he was, after all, the Marquess of Cainewood, and they did own a rather luxurious carriage. But one of its wheels had broken on their way out of London, and they'd been forced to take public transport—or else risk missing an urgent appointment back home at Cainewood Castle.

An appointment to introduce Kendra to the latest "suitable" man her brothers planned to foist upon her.

"My comfort isn't the issue here—"

"This is your last chance to make your own choice," Jason interrupted her, gathering the cards from the hand of piquet they'd just played. "If you won't marry Lechmere, you'll have to select one of the other men who have offered for you. Or
I
will do the selecting."

"The other men." Kendra tossed her head of dark red curls, not believing her brother's ultimatum for a moment. The wretched day had put him in a bad mood, but he was generally the most reasonable man she knew. "Old but well-off, or widowed and settled with children, or young but just plain
boring
. Stable, wealthy men in the good graces of King Charles, every last one of them."

Her brother's green eyes flashed. "Yes, perfectly acceptable, every last one of them."

Cait's eyes filled with sympathy and a bit of shared exasperation. She laid a hand on her husband's arm. "I've told you before, Kendra wishes to marry for love, not—"

"Stand and deliver!" a deep voice interrupted from outside.

With an unnerving suddenness, the coach ground to a halt. Stopped in mid-sentence, Cait's mouth gaped, and Kendra's stomach clenched in fear.

Ford leaned forward and pushed open the door. A man on horseback—a highwayman!—poked his head inside.

The most compelling head Kendra had ever seen.

"You?"
Jason and Ford said together.

They knew this man?

Since Kendra hadn't heard that either of her brothers had been hurt—or even robbed, come to think of it—most of her fear dissipated, and her heart lifted with excitement instead.

Looking slightly disconcerted, the highwayman dismounted. "Aye, it's me," he said slowly. Beneath the mask that concealed the upper half of his face, a grin emerged. An engaging slash of perfect white.

Well, not precisely perfect. One of his front teeth had a small chip, but she found that tiny imperfection endearing. And he was dashing, not to mention forbidden. If any of her hopeful suitors had been like this man, she'd have married him in a trice.

She wanted to say something to make him notice her. But for the first time in her memory, her mouth refused to work.

His gaze swept the coach's dim interior as though she weren't even there. "You," he said succinctly, motioning to the whey-faced businessman seated beside Ford. "Get out."

"There be five of us in here, three of them men, likely with pistols," the man said stiffly. From his haircut, plain clothes, and the short, boxy jacket beneath his cloak, Kendra knew he was a Puritan. "Perhaps thee had better think again."

"Oh, it's violence you threaten, aye?" The highwayman's voice was deep and a little husky, with, curiously, the barest hint of an accent. "Perhaps
you
had better think again. My friends," he drawled, gesturing toward the hill behind him, "would make certain you cease to exist within the minute. Get out. Now."

Kendra looked out the door and up. Sure enough, there were a dozen or so men at the top of the hill, their guns trained on the coach.

The Puritan must have recognized the threat, for he reluctantly climbed down. Kendra shifted within the coach, the better to see out.

The victim was a good foot shorter than the robber, who looked impossibly tall and elegant in a jet-black velvet surcoat. Close-faced and resigned, the Puritan emptied his pockets and handed over his money, then turned to reenter the coach.

The highwayman reached to grab the victim's sleeve. "Not so fast."

Visibly shaken, the smaller man stilled but said nothing.

The highwayman shook him a little. "Surely a...man of business, such as yourself, will be carrying more gold on his person than this. Where is it? Sewn into your cloak? Hidden in your luggage?"

Though Kendra could see the rise and fall of his agitated breathing, the Puritan turned back boldly. "Surely
thee
has no need of gold," he spat out, tugging his sleeve from the bigger man's grasp while eyeing his groomed appearance and expensive, tailored suit. "A...
gentleman
such as thyself."