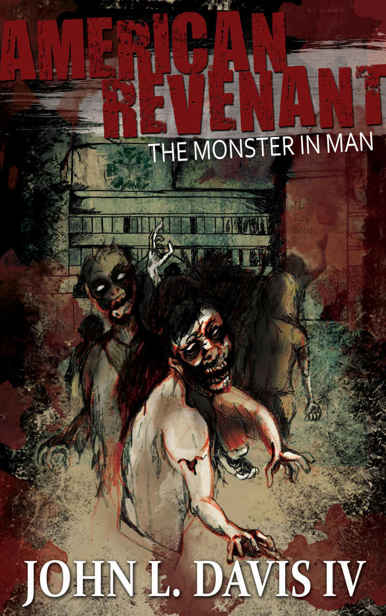 The Monster In Man

“Are you sure about this,
Gordon?  Is this really what you want to do?”

“I don’t
want
to
go back to Hannibal, Jan, but I think it’s important that we do.  We need to
check the National Guard Armory; and try to reach the hospital, see if we can’t
find you at least some of the equipment you need to begin working on the viral pathology.
The guys have already said they’re willing to go.”

“Gordon, you know that
every one of those men would follow you straight into Hell itself, if you asked
them to, right?”

Gordy rubbed his palms
over his face several times, thinking about Jan’s words.  “Yeah, I know.  I
also know that going back out there may be doing just that, going into Hell
itself.”

“You’ve gotten the
council to agree on it, but you should really take some time to plan it out.”

“I got them to agree on
it, but I still think Tam wants to take a swing at me.  I thought she was going
to chew my head clean off.”

“A lot has happened, and
she’s scared to send anyone back out there, especially Jimmy.  Tam’s terrified
that the girls are going to end up without a father, and it’s something she
thinks about every time he goes out.  Whether anyone admits it or not, we all
think it, every single time people leave the safety of the Camp.”

Gordy stood up,
stretching his back and flexing his left knee.  He took stock of the tiny
dispensary, impressed with the work that Jan and Anna had done.  The makeshift
shelves were all full and neatly labeled, allowing them to find what they
needed quickly as well as making it easier to inventory.

“Your knee hurting you?”

“Not really, it’s just a
bit stiff and achy today.”

Jan stood, refolding her
chair and slipping it between her cot and the wall.  “I’ll give you an
anti-inflammatory now, and I have some corticosteroid cream you can use in the
evening, it should help with the discomfort.”  Gordy swallowed the tablets she
gave him with a swig from his water bottle.

“I need to get up and
move around, you want to go for a walk?”

Gordy nodded and gave his
wife a quick kiss before heading out the door, turning toward the rumbling
sound of the backhoe in the distance.

Moving down the path
leading to the concrete pool, which had become long term water storage for the
camp, Gordy kept an easy pace, in no hurry to reach his destination.  He
stopped in his tracks when he heard someone shouting his name behind him.
Gordy did not realize that he had reached for the holstered Sig P227 he was
carrying until he had turned completely around to see Louis waving and calling
his name.

Waiting for the boy to
reach him, Gordy relaxed, letting his arm fall to his side.  “Hey, Louis,
what’s the hurry?” he called out.

“Hey, uh, Gordy, sir,” he
said, between drawing heaving breaths, “Dean wanted me to run up and report
something to you.”

Gordy nodded, staring at
the boy, letting him catch his breath before asking, “Well, what were you
supposed to report?”

“Oh, yeah, sorry.  Uh,
there’s been a truck drive by on 79 several times now, since you guys came back
from Frankford a few days ago.  Dean thought it was odd, that it just drives
by; slowing for a second when it passes by our road, then keeps on going.
That’s what he wanted me to tell you.”

“What kind of truck is
it, and when was the last time anyone saw it?”

“It’s an old pickup, we
saw it about half an hour ago, heading south on 79.  That was the first time
anyone saw it today.”

“Ok, thanks.  Let Dean
know that I’ll be down in about an hour to talk to him about it.  You guys keep
a sharp eye.”

“Uh, ok, Gordy, uh,
sir.”  Gordy chuckled as Louis took off at a run.  He could not figure out why,
but the boy got nervous around him now, more so than he had even a week ago.

Returning to his walk,
Gordy quickened his pace a little.  He wanted to see the progress on the wall
before he went down to talk to Dean.

He followed the deep and
slightly choppy rumble of the backhoe until the sound suddenly cut off, leaving
the woods oddly quiet for a moment.  That quiet was ruptured by shouts from the
same direction.  Gordy stepped up his pace, but didn’t start running until he
heard someone yell, “Zombies in the trees!”

The air-horn carried by
the person on top-watch began to blare loudly, and Gordy realized the shout
must have been heard back at camp.

Gordy hurried past the
concrete pool, following the rutted path left by the heavy equipment.  Even
running past, in a rush to reach the work crew, Gordy found himself impressed
with the speed the group was working.  They had put up a solid wall nearly five
hundred feet past the pool area.  At the rate they were working the entire
defensive structure could be finished before the first snowfall.

Everyone at the worksite
turned, raising their weapons at the sound of Gordy’s pounding footsteps.
Everett, who was still sitting on the tractor, lowered his pistol quickly,
while the others looked back toward Jimmy, who was impaling the last of four
zombies with a five foot long sharpened pole.

Gordy didn’t stop running
until he stood beside Lynn, who still had her Bushmaster M4 shouldered as she
continued to scan the surrounding woods.  Bending over, grasping his knees,
Gordy sucked in air, regaining his breath far faster than he would have nearly
a year ago.

“Yeah, I’m fine.  What
the hell happened out here?”

Everett slowly made his
way down from the backhoe, joining Jimmy, Rick, Garret, and Lynn as they stood
around Gordy.  Gordy held his hand up, just as Everett, Garret and Lynn began
talking at the same time.  “One at a time, guys.”

“Zombies came out of the
trees,” Rick said.  “We didn’t notice the first one until Everett shouted as he
ran it down.  It’s still under there,” Rick told him, pointing to the front of
the backhoe.

Gordy walked around the
front of the tractor, staring down at the gut-sucker pinned beneath the heavy
front tire.

The creature was not yet
dead, even though its entire mid-section had been completely crushed beneath
the wheel of the heavy machinery.  Turning its head as Gordy approached, the
zombie’s teeth snapped together repeatedly, the sharp clacking causing muscles
to tense in the bystander’s necks.  It reached for Gordy with an unpinned arm,
broken, decaying fingers clutching at empty air.

“Hand me that pole,”
Gordy said, reaching behind him, waiting for the sharpened stick to be placed
in his hand.

Grasping it tightly,
Gordy shoved hard on the pointed stave, audibly popping the left eyeball and
burying the end in the soft, freshly loosened earth beneath the dead thing’s
head.

“Anyone have an idea
where these might have come from?” Gordy asked the group as he yanked the pole
out, splattering brain tissue over his boots.

Just as Rick opened his
mouth to answer they heard gunshots in the distance.  His mouth snapped shut as
he turned to look at the others.

Without a word Gordy
turned around and began running toward the camp.  “Rick, with me, Jimmy you stay
here with the others!  Watch the area!” he shouted back over his shoulder.

Gordy and Rick made it to
the main house in minutes.  People were posted, firearms ready and eyes
watchful.  No children were present, having been ushered quickly into the nearest
building, as had been planned.

The two men didn’t stop
to speak to anyone.  They made for the nearest vehicle parked in the small lot
in front of the main house, and drove toward the gate.  Alex had taken an
emergency guard position and Gordy hit the horn twice, letting him know to open
the gate, and giving him the return signal at the same time.

Alex swung the gate open
quickly, one hand raised palm up, as if to ask what was going on.

“Going to find out,”
Gordy shouted out the window as he passed Alex’s position without slowing.
Once through the gate Gordy drove as fast as the roads would allow, making it
to the cattle-guard drawbridge within minutes.

Scanning the area, Rick
could see Dean lying prone behind the tiny guard shack that had been built beside
the makeshift bridge.  He could just make out Rebecca’s ball cap through a tiny
firing port in the wall of the structure.

Gordy stopped the truck
mere feet from where Dean lay watching down the road toward the highway,
peering silently through the scope of a high-powered rifle.  Exiting the
vehicle, both Gordy and Rick crouched down behind open doors, making themselves
a difficult target for anyone watching from a distance.

“We’re fine Dad; more
scared than anything.”  Dean called back without removing his eye from the
scope.

Looking through the cab
of the pickup truck, Gordy turned to Rick, “Cover me, I’m moving up.”  Rick
responded with a nod.

Gordy surveyed the
surrounding area once more before duck-walking the few feet to Dean’s position
behind the guard shack.  He heaved a sigh of relief when he made it to the
small building without being fired on.

Crouching beside Dean,
his left knee shooting tiny bolts of pain at the stress placed on the worn
joint, Gordy slowly leaned back against the wooden wall, and let himself slide
to the ground, so that he sat next to his son.

“What happened, and
where’s Louis?”

“Louis is in the house.
Seems like they were just shooting in this direction, not really aiming for
anything.  A couple of rounds went through the shack, but no one was hurt.”

Gordy glanced up and over
his shoulder, looking for bullet holes in the wood planks they had used to
fashion the tiny one person shack beside the draw-bridge.  He could see at
least two holes, high up on the wall.

“I had just come out to
relieve Becca; we were both standing outside when the first shot was fired.  I
dove into the ditch, pulling her with me.  Whatever they were shooting, Dad, it
was fully automatic.”

Gordy silently examined his
son for a moment.  Dean’s eyes were large, and the skin around his facial scars
glowed an angry red, though the rest of his face appeared slightly pale.

“Everyone is ok, and
that’s all that matters at this very moment.  We’ll figure out the rest later.
We’ll get everyone together for a meeting; see what we can do about this.  Send
Louis up for dinner a little early, and then have him relieve you and Becca.
When you two finish eating we’ll get the meeting started.”

Gordy stood up slowly,
shaking the little shack as he leaned against it for support.  “Easy out
there!  You’ll bring this damn thing down on top of me!”

“Yes, ma’am!” Gordy said,
laughing.  He stood to his full height, squeezing his knee as he fully extended
it, wincing at the burst of fiery pain that seemed to radiate all around the
kneecap.   “Rick and I are going to head back up.  I don’t want either of you
or Louis going out to investigate; hold your positions here.  It’s about three
hours to dinner-time,” he said, looking at his watch, “we’ll see you then.”

Back in the truck and heading toward camp, Gordy told Rick to
gather Jimmy, Mike and Alex to walk the woods.  He wanted to be sure there were
no more dead stumbling around in the trees.  They all needed to watch for
obvious signs of how the zombies could have gotten this far out. Something
didn’t feel right to him.