The More the Merrier 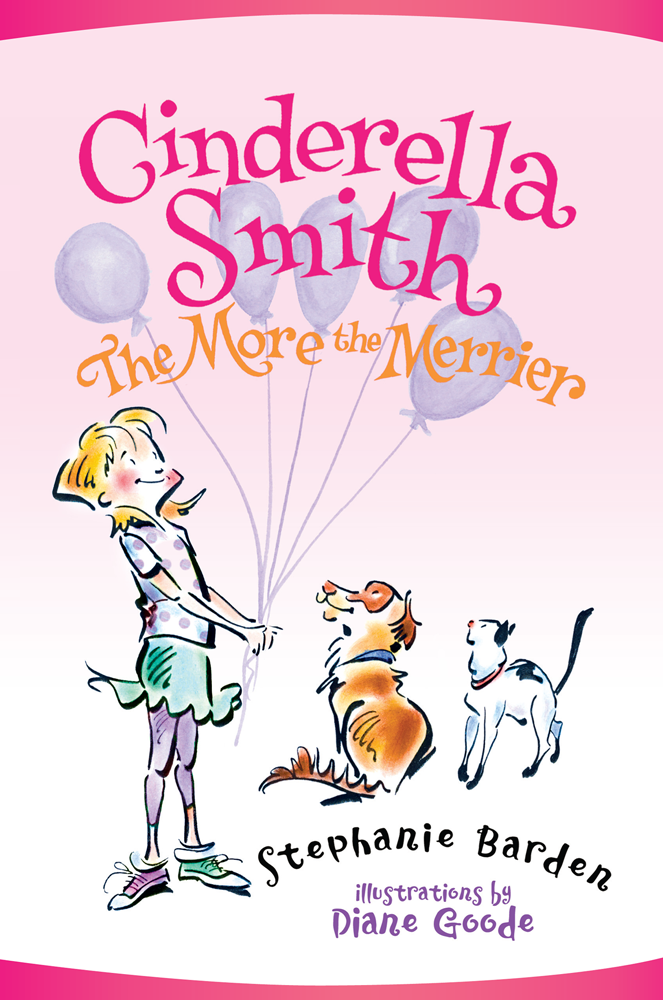 Cinderella Smith
The More the Merrier

To my mom and dad,
for the love of books and stories
Thanks to my very own fairy godmothers:
Marietta Zacher, Barbara Lalicki, and Diane Goode 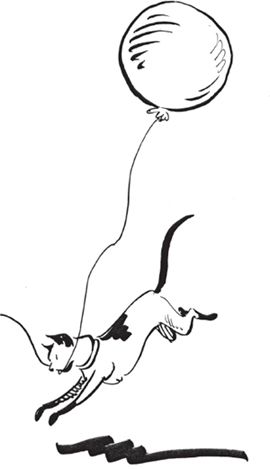 Chapter 6 - Great with a Capital G

Chapter 14 - More of Everything 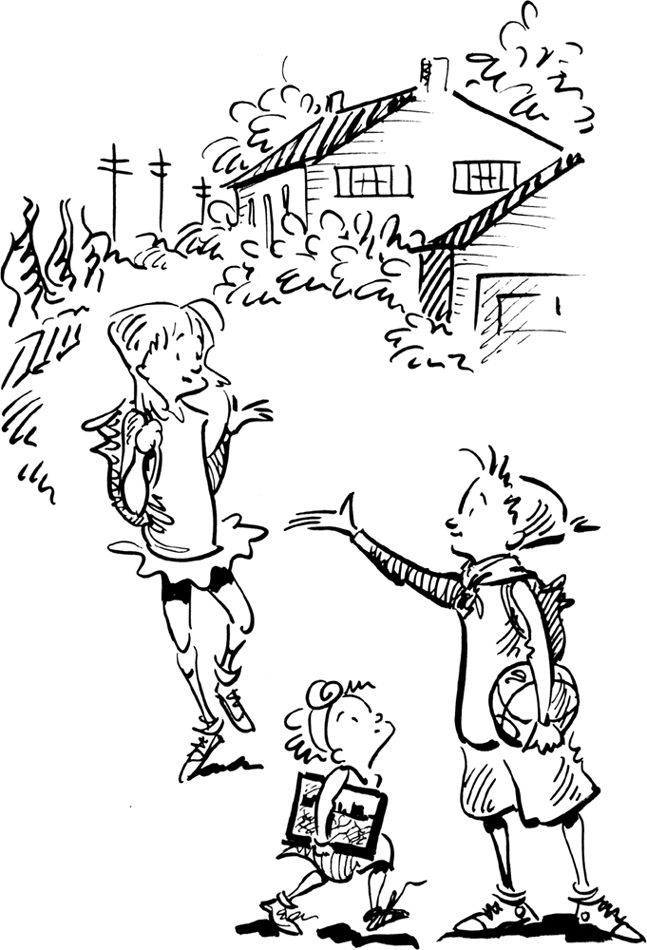 “I
t's time to leave for school!” I yelled to my mom and my little sister, Tess. And I knew this not because of the clock or because a show ended on TV. I knew it because I could hear the
bounce-bounce-bounce
of my next-door neighbor Charlie's basketball coming up our walkway.

“Hi, Tarlie!” Tess raced out the door first. She had a big, huge crush on Charlie and just couldn't wait to see him every morning.

I did a big sigh on account of the name he called me. When we were little, we couldn't say each other's names just right, so we called each other Tinder and Tarles. Now we can say the
s
and the
ch
sounds just fine, but Charlie keeps calling me Tinder to bug me.

Tess grabbed hold of my hand, and we followed Charlie, who was jogging and dribbling his basketball down the block. Every day we walk to school together, along with a kindergartner named Louie, who lives at the end of our block. Most times our moms come too because they're all friends. My mom brings Tess, and Louie's mom brings his little sister, Maggie. Charlie's mom just brings Charlie, though, because his big brother goes to another school on a bus.

Charlie stopped where he was and waited for us to catch up.

Rosemary T. is another kid who lives on Blackberry Lane and goes to our school. She almost never walks, though. Her mom drives her big sisters to their school first, then drops Rosemary T. off at the end. Also, Rosemary T. does not like fresh air and exercise too much.

Since Rosemary T. didn't know that the dribbling sound was the signal to come outside, Tess and I went up to the front door and knocked.

“Is it raining?” Rosemary T. didn't look too happy.

“I can't believe my mother is making me walk.”

“Well then, I can't believe my
father
is making me walk.”

She said
father
very loud because right then he was heading out the door with Rosemary T.'s sisters.

“I'm sorry, honey,” said Mr. Taylor. “I don't have time to get all of us where we need to be this morning.”

“Don't be such a baby,” said her oldest sister.

Her middle sister rolled her eyes. “You only have to walk a few blocks.”

Rosemary T. rolled her eyes right back. “Whatever.”

Mr. Taylor waved hello to everyone, and he and Rosemary T.'s sisters all got in their car.

Louie and his mom and Maggie crossed the street to join us, and we started off again to school. Maggie grabbed my hand and Rosemary T.'s hand and Louie grabbed Tess's hand, and we walked in a big, long chain down the block.

Right then the Taylors' car drove by and honked. Rosemary T. let go of Maggie's hand superquick, and our chain wobbled a little bit but then straightened out.

“Head, shoulders, knees, and toes,” Maggie and Tess and I joined in.

“Eyes and ears and mouth and nose,” Charlie yelled, bouncing his ball all around us.

“Head, shoulders, knees, and toes,” we sang all the way to school, except for Rosemary T.

When we got to the playground, she raced off to find her best friend, Rosemary W. I said good-bye to Tess and my mom and went to get in my class line because the start-of-school bell rang.

My best friend, Erin, was already in line behind the Rosemarys, so I went to stand by her.

“I had to
walk
to school today with
Cinderella
,” Rosemary T. said to Rosemary W. The way she said it made it sound terrible.

She turned around. “I can't believe you were
skipping
and
singing
and
holding hands
on the way to school.”

“I would never want to look as babyish as you,” she said.

“I would have skipped and sung and held hands,” said Erin.

“I know you would,” I said, “because the more the merrier!”

“I was so embarrassed,” Rosemary T. told Rosemary W. “I walked way back with her mom and pretended I didn't know her.”

“I would have done the same thing,” said Rosemary W.

“You missed out,” I said. “It was funderful!” I was very into making up new words lately, and this one was a combination of
fun
and
wonderful
all together.

“I hate all those dumb words you keep making up,” said Rosemary T.

“It's just another one of the childish things that Cinderella is always doing lately,” said Rosemary T., “like hanging out with little kids and losing shoes.”

My feelings started hurting like the dickens, and I felt tears filling up my eyes. Luckily our line started moving and the Rosemarys went ahead, so they didn't see.

“Didn't your moms ever teach you,” Erin called after them, “that if you can't say something nice, you shouldn't say anything at all?”

I blink, blink, blinked at the tears walking to class and was good to go by the time we got there.

“Find your seats, class.” Our teacher, Mr. Harrison, waited for us to get all settled. “As you know, our all-school spelling bee is a week from today. Now that you're in the third grade, the three best spellers among you will get to participate.”

There were some hoorays from the good spellers and some groans from the not-so-good spellers. I myself didn't say anything because I'm somewhere in the middle.

“On Monday we'll have our in-class spelling bee to determine who those three are,” said Mr. Harrison. “To encourage you to study hard, whoever does the best in the all-school spelling bee will get to plan a class party.”

Everyone hoorayed to that, because everyone loves a class party.

Zachary, a very, extremely quiet boy who sits at the back of the classroom, raised his hand.

I strained my ears to hear. Zachary doesn't say much, so when he does, I'm always very interested.

“What kind?” Mr. Harrison asked back.

“It can be whatever kind of party the winner wants,” said Mr. Harrison. “What are some things you're interested in? What would make a good party theme?”

“I'm interested in dinosaurs,” said Logan, “so I'd have a paleontology party.”

“I'm interested in insects,” said Trevor, “so I'd have some kind of bug theme.”

“I'd do a Let Pluto Stay a Planet party,” said Christopher. 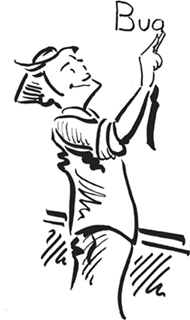 Mr. Harrison wrote
Bugs
and
Planet
Pluto
on the board. “How about you, Cinderella?” he said.

I happened to share a table with Logan, Trevor, and Christopher, who happened to be the three smartest boys in the class. I guess Mr. Harrison wanted to finish up with our table, because I didn't have my hand up.

“I don't have the foggiest idea,” I said.

Mr. Harrison looked like he could not believe his ears. “But you always have an idea.”

“I know,” I said. “Maybe it's more like I have too many foggy ideas and they're all running around inside my head and I can't decide on just one.”

Mr. Harrison smiled and wrote
I Can't Decide Yet
. He added a check mark after it. “That check is for you, Zachary, since you can't decide yet either.”

Kristy raised her hand, and I knew for sure what her idea was going to be.

I smiled across the room at Erin, and she smiled right back. Erin sat next to Kristy at a table with girls who were just crazy about horses. I could tell that Erin had known for sure what Kristy's idea was going to be like I did.

“Horses for me too,” said Olivia, Kristy's best friend.

Mr. Harrison wrote
Horses
on the board and put a check mark next to it.

“I think it should be basketball,” said Charlie.

“Or maybe soccer,” said Jack. He sits next to Charlie at a table full of boys who are loud and love sports.

Kids started calling out party ideas, and Mr. Harrison wrote them all down.

“Ahem!” said Rosemary T. very loudly to get everyone's attention. “Our whole table agrees that it should be an I Believe in Unicorns party.”

I looked over at her table. Rosemary W. and Hannah were nodding their heads. Abby, who also sat with them, didn't look so sure. Still she didn't say anything out loud. 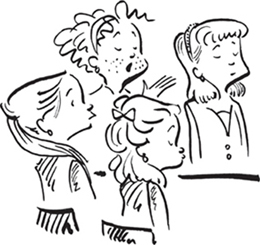 Mr. Harrison added
I Believe in Unicorns
to the long list of party ideas on the blackboard. He put three check marks next to it.

There was a knock on our classroom door, and the other third-grade teacher, Mrs. Kirk, poked her head in.

“Excuse me a moment, class.” Mr. Harrison walked over to see what she needed.

“But I don't believe in unicorns,” said Kristy. “They aren't real horses.”

Rosemary T. spun around in her chair and stared hard at Kristy. “Then you will definitely never be invited to join the I Believe in Unicorns Club.”

Rosemary T. and Rosemary W. were very into starting clubs lately. To give you a few examples, there was the American Girls Club if you liked those books and the Sisters Club if you had at least one sister and the Grape Club if you thought that was the best flavor. There was also the Pierced Ears Club that I wasn't in because I don't have pierced ears yet. And the Dance Class Club that Erin wasn't in because she hasn't started dance class yet.

Rosemary T. kept up that mean stare at Kristy. “Also, when
I
win the spelling bee and
I
plan my I Believe in Unicorns party, you can just sit out in the hall.”

“You won't get any unicorn cupcakes either,” added Rosemary W.

Kristy blinked very fast at the tears in her eyes, but she started to cry anyway. Her whole table patted her on the back and told her it was okay, but that just made her cry harder. And right then and there I started to see red, which means I got mad with a capital
M
.

Cupcake Cutie (Plus Size Romance 1) by Lynn Cooper
House of Earth by Woody Guthrie
The Better to Bite by Cynthia Eden
I Hate You...I Think by Anna Davis
Going Somewhere: A Bicycle Journey Across America by Brian Benson
The Seed of the White Tiger by JJ Jones
Alive by Holli Spaulding
Honeymoon of the Dead by Tate Hallaway
In Between the Sheets by Ian McEwan
Bite Me (Woodland Creek) by Mandy Rosko, Woodland Creek