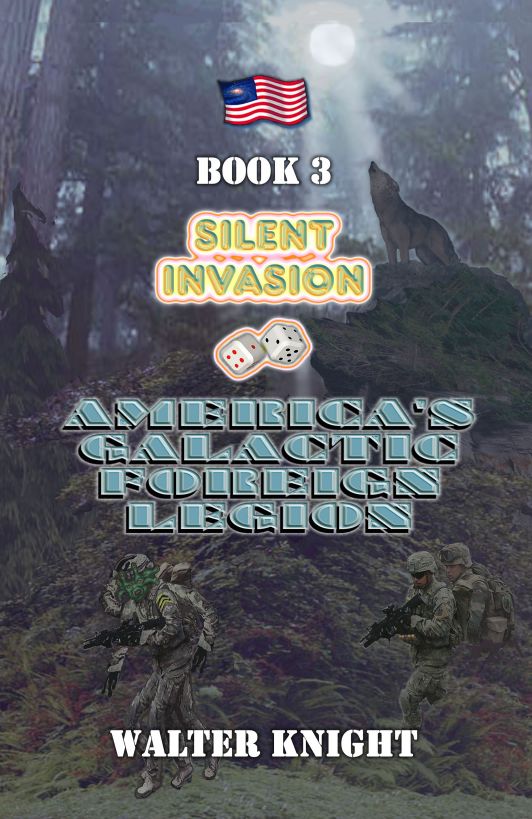 Decorated war hero Captain Joey R. Czerinski
of the United States Galactic Foreign Legion faces even more
challenges as the Arthropodan Empire ramps up its plans to take
control of the prized planet, New Colorado. Double-crossing friends
and adversaries on both sides, out to make a buck, put the Legion
at the mercy of spider forces whose careful planning and military
strategies seem to ensure Arthropoda will gain control over more
territory in a campaign of silent invasion.

As the situation deteriorates for the human
occupation, Czerinski realizes he can’t trust anyone, not even his
past business partner and constant cohort in mischief, Lieutenant
Manny Lopez. The wolves are literally at the door, and Czerinski
finds himself backed into a corner, wondering what he can possibly
do to save the day and restore the Legion’s control of planet New
Colorado. With the odds against him, maybe the only thing Czerinski
can do is take a dive and throw the fight – literally.

Nothing’s a sure thing, especially in war –
except that through all the ups and downs and continual
serendipitous surprises, this ongoing satirical, politically
incorrect, sweeping military space opera is sure to entertain.

This is a
work of fiction. Names, characters, planets, asteroids, alien
species, evil empires, galaxies far, far way, or future events and
incidents, are the product of the author’s imagination, or are used
fictitiously. Any resemblance to actual persons or aliens, living
or dead, events or locales including those on Mars and New
Colorado, is entirely coincidental.

Licensing Note: This ebook is licensed and
sold for your personal enjoyment. Under copyright law, you may not
resell, give away, or share copies of this book. You may purchase
additional copies of this book for other individuals or direct them
to purchase their own copies. If you are reading this book but did
not purchase it, or it was not purchased for your use only, out of
respect for the author’s effort and right to earn income from the
work, please contact the publisher or retailer to purchase a legal
copy.

I dedicate
America’s Galactic Foreign Legion – Book 3:
Silent Invasion
to the heroes of the
Battle of Ramree Island. A special thanks to editor Patricia
Morrison and my loving wife Barb for their support.

My name is Captain Joey R. Czerinski, hero of
the United States Galactic Foreign Legion, currently assigned to
the City of Finisterra, Planet New Colorado, where I am fighting a
growing alien insurgency. A recent second battle between human and
Arthropodan factions has resulted in the United States Galactic
Foreign Legion holding the planet New Colorado as human territory,
despite the growing civilian population of spider-like Arthropodans
on the planet. As we try to maintain order and control on New
Colorado, I fear our position is deteriorating.

The Emperor of the Arthropodan Empire wanted
the riches of New Colorado. Gold, oil, and uranium were discovered
by the human pestilence after the last war. It grated on the
Emperor that humanity’s windfall was at the expense of Arthropodan
effort. A large spider population still lived in the Northern
Hemisphere of New Colorado. Immigration was adding to that
population. Did not the spider species need the protection of the
Arthropodan Empire against continued abuse from the human
pestilence? Of course it did.

An Arthropodan fleet of starships bullied its
way into orbit around New Colorado. By order of the Emperor, the
Fleet secretly provided arms and advisors to a growing insurgency
fighting for independence against the United States Galactic
Foreign Legion. The Emperor did not necessarily want war with the
United States Galactic Federation. At least not yet. The last two
wars had gone badly. The Emperor wanted merely to use intimidation
and the local insurgency as bargaining chips to negotiate a new
treaty annexing the northern part of New Colorado back into the
Arthropodan Empire, giving Arthropoda its rightful share of the
planet’s wealth. The Emperor’s general staff and advisors
encouraged even stronger action, but that was why they were not the
Emperor! All comes to those who wait patiently.

“We have the larger space fleet,” advised the
Imperial Fleet Commander. “Most of the Legion’s starships are
guarding the Coleopteran Frontier on the other side of human space.
Our main problem is that the human pestilence may have developed
stealth technology that completely hides their starships. Already
we have suffered isolated losses that cannot be explained.”

“On the ground they are weak, too,” advised
Marine Special Forces Commander #1. “The human pestilence are
trying to defend New Colorado with local forces and their Foreign
Legion. Again, this is because their main military assets are on
the Coleopteran Frontier. We should just take the planet while we
have the human pestilence at a disadvantage.”

“The humans have a huge military industrial
complex,” said the Emperor. “We are lucky their military might is
not pointed in our direction. We need to keep it that way, while
seizing our fair share of New Colorado.”

“The human pestilence have an applicable
axiom of law: possession is nine-tenths of the law,” commented
Special Forces Commander #1. “We will land troops, hold our ground,
and negotiate for peace and reasonably stable borders. We will not
even need to use nukes.”

“Invasion might provoke a nuclear response,”
warned the Fleet Commander. “Humans love to use nukes. They have
done so many times.”

“So have we,” said the Emperor. “But if we
use restraint, so will they. The human pestilence have to be more
cautious about the risk of nuclear war because of the growing
population.”

“You can not be sure of that,” said the Fleet
Commander.

“New Colorado is a prize,” said the Emperor.
“It will not be destroyed with nukes. Not by us.”

“I will land Marine Special Forces troops at
strategic points in the North,” said the Special Forces Commander.
“Not armies or divisions at first, but small mobile units. They
will link up with and arm the insurgency. The human pestilence
can’t use nukes against small mobile units. We will explain that
our fleet remains in orbit to deter more genocide and the
well-documented abuse by the Legion. The Fleet will also deter the
Legion from using strategic weapons.”

After a brief but heated skirmish, the Legion
lost the eastern half of Finisterra across the river. I shook my
head in dismay.

“Captain Czerinski, initial reports from East
Finisterra indicate that heavily armed insurgents have attacked and
captured Pizza Hut,” advised Lieutenant Manny Lopez. “Our troops
are falling back to the bridge.”

I could see smoke rising from East
Finisterra. We still held the downtown area near the bridge, but
all outlying areas had been abandoned. “How did they get so strong
so fast?” I asked.

“I am receiving a radio message from the
insurgent commander,” said Lieutenant Lopez. “He says he wants to
negotiate a truce and establish a permanent border at the river. Do
you want to talk to him?”

I snatched the radio. “This is Captain
Czerinski of the United States Galactic Federation Foreign Legion,”
I said. “We do not negotiate with terrorists.”

“I am not a terrorist,” replied the insurgent
leader. “I am the voice of the new government in East Finisterra.
Be reasonable. All we want is peace and our own side of the river
... and Pizza Hut.”

“Forget it,” I shouted. “There will be no
peace with terrorists. Today you want Pizza Hut, tomorrow you will
want Taco Bell!”

“I took Taco Bell five minutes ago!” boasted
the insurgent commander triumphantly. “And I am about to seize
KFC.”

“Can we verify that?” I asked, turning to
Lieutenant Lopez.

“After we capture your three major food
distribution centers, you will have no choice but to surrender East
Finisterra or starve,” said the insurgent commander.

“You know nothing,” I countered. “We still
hold McDonald’s here on the west side of the river. Your plan is
flawed.”

“Tell him we hold a Subway Sandwich Shop,
too,” said Corporal Williams. “We will never surrender!”

“Shut up!” I ordered. “I’m being overrun by
idiots and junk food bandits.”

“Come on, Czerinski,” urged the insurgent
commander. “How long do you think you can survive on just Big Macs
and Quarter Pounders? The grease alone will kill you.”

“He’s got a point there,” cautioned
Lieutenant Lopez.

“Legionnaires are resourceful and resilient,”
I replied defiantly. “Plus we have a Subway Sandwich Shop.” I
nodded at Williams.

“Take that, you punk!” shouted Corporal
Williams, letting out his famous rebel yell.

I turned to Lieutenant Lopez. “Take a column
of tanks across the bridge and blast that fool,” I ordered. “Where
is our air support?”

“New ground-to-air missiles are keeping our
Air Wing at bay,” said Corporal Kool. “And the Space Weapons
Platform T. Roosevelt is in a standoff with the Arthropodan
Fleet.”

I watched Lieutenant Lopez lead three tanks
across the Finisterra Bridge. Immediately the lead tank was hit by
an anti tank missile. The tank caught fire. Corporal Williams
dragged badly burned Lieutenant Lopez out the rear door. After
firing several volleys into East Finisterra, the other two tanks
retreated off the bridge.

“Radio Sergeant Green to pull out of East
Finisterra,” I ordered, hoping to save my remaining legionnaires.
“We will hold at the river.”

“What we need is a nuke to show the
insurgents who the top dog is around here,” I commented. “Do we
have any nukes left?”

“General Kalipetsis took all our nukes when
the war ended,” answered Corporal Kool. “We don’t have permission
to use nukes anyway. Not unless a real war breaks out.”

“This is a real war!” I complained, slamming
my fist into the wall as I paced.

“Corporal Tonelli has a nuke,” said Corporal
Williams. “I saw it.”

“What?” I asked. “How would Tonelli get his
grubby hands on a nuke?”

“It’s an old Arthropodan Air Wing nuke he
found when we were fighting in the tunnels of New Disneyland. He
kept it, hoping to make some money on the black market.”

After Hours by Marie Rochelle
Cursed! by Maureen Bush
The One Percenters by John W. Podgursky
Promise by Sarah Armstrong
Musicophilia: Tales of Music and the Brain by Oliver W. Sacks
Patricia Veryan - [Sanguinet Saga 09] - Logic Of The Heart by Veryan, Patricia
A Christmas Gone Perfectly Wrong: A Blackshear Family novella (B 0.5) by Cecilia Grant
Murdermobile (Portland Bookmobile Mysteries) by B.B. Cantwell
The Notebooks of Leonardo Da Vinci by Da Vinci, Leonardo
A Little Night Magic by Lucy March