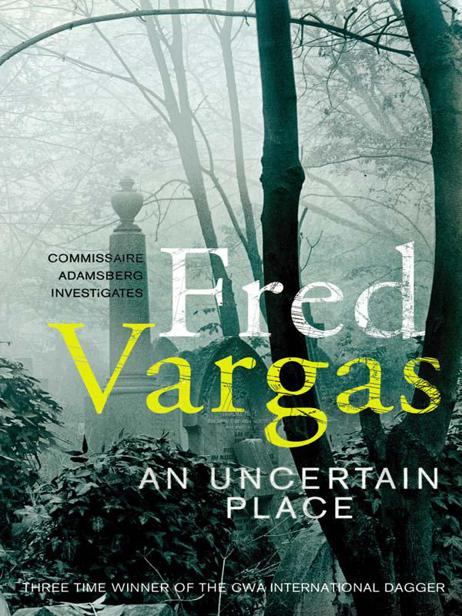 Commissaire
Adamsberg leaves Paris for a three-day conference in London. Accompanying him are Estalere, a young sergeant, and
Commandant
Danglard, who is terrified at the idea of travelling beneath the Channel. It is a welcome change of scenery, until a macabre and brutal case comes to the attention of their colleague Radstock from New Scotland Yard.

Just outside the gates of the baroque Highgate Cemetery a pile of shoes is found. Not so strange in itself, but the shoes contain severed feet. As Scotland Yard’s investigation begins, Adamsberg and his colleagues return home and are confronted with a massacre in a suburban home. Adamsberg and Danglard are drawn in to a trail of vampires and vampire-hunters that leads them all the way to Serbia, a place where the old certainties no longer apply.

In Fred Vargas’s riveting new novel,
Commissaire
Adamsberg finds himself in the line of fire as never before.

Fred Vargas was born in Paris in 1957. As well as being a best-selling author in France, she is an historian and archaeologist.

Version 1.0
Epub ISBN 9781446468166
www.randomhouse.co.uk
Published by Harvill Secker 2011
2 4 6 8 10 9 7 5 3 1
Copyright © Éditions Viviane Hamy, Paris English translation copyright © Siân Reynolds 2011
Fred Vargas has asserted her right under the Copyright, Designs and Patents Act 1988 to be identified as the author of this work
This book is sold subject to the condition that it shall not, by way of trade or otherwise, be lent, resold, hired out, or otherwise circulated without the publisher’s prior consent in any form of binding or cover other than that in which it is published and without a similar condition including this condition being imposed on the subsequent purchaser
First published with the title
Un lieu incertain
in 2008 by Éditions Viviane Hamy, Paris
First published in Great Britain in 2011 by
H
ARVILL
S
ECKER
Random House
20 Vauxhall Bridge Road
London SW1V 2SA
www.rbooks.co.uk
Addresses for companies within The Random House Group Limited can be found at:
www.randomhouse.co.uk/offices.htm
The Random House Group Limited Reg. No. 954009
A CIP catalogue record for this book is available from the British Library
ISBN 9781846554452
This book is supported by the French Ministry of Foreign Affairs as part of the Burgess programme run by the Cultural Department of the French Embassy in London.
www.frenchbooknews.com

C
OMMISSAIRE
A
DAMSBERG KNEW HOW TO IRON SHIRTS
. H
IS
mother had shown him how you should flatten the shoulder piece and press down the fabric round the buttons. He unplugged the iron and folded his clothes into his suitcase. Freshly shaved and combed, he was off to London, and there was no way of getting out of it.

He pushed a chair into the patch of sunlight falling on the kitchen floor. Since the room had windows on three sides, he spent his time moving his seat around the circular table, following the light, like a lizard on a rock. He put his bowl of coffee on the east side and sat down with his back to the warmth.

Going to London was fine by him: he would find out whether the Thames smelt of damp washing the way the Seine did, and what kind of sound the seagulls made. Perhaps they had a different call in English. But he would hardly be allowed time for that. Three days of conference, with ten papers per session, six debates, and a reception at the Home Office. There would be a hundred or so top brass, representing police forces from all over Europe, crammed into a big hall; cops from twenty-three countries, seeking to foster closer police links in an expanded Europe and, more precisely, to ‘harmonise the management of migratory flows’. That was the subject of the conference.

As chief of the Serious Crimes Squad in Paris, Adamsberg was obliged to turn up, but he wasn’t greatly concerned. He would be participating in a virtual, hands-off way: first because of his ingrained hostility to any ‘management of flows’, and secondly because he had never been able to remember a word of English. He finished his coffee contentedly, reading a text message from
Commandant
Danglard: ‘
Rdv 80 mins GdNord eurostar gate. Fckin tnnl. Have smart jkt + tie 4 U
’.

Adamsberg pressed ‘delete’, wiping away his deputy’s anxiety like dust from furniture. Danglard was not cut out for walking or running, still less for travelling. Crossing the Channel by tunnel was as distressing for him as flying over it in a plane. But he would not for all the world have given up his place on the mission to anyone else. For thirty years, the
commandant
had been wedded to the elegance of English clothes, on which he banked to make up for his lack of good looks. And from this vital choice he had extended his gratitude to the rest of the United Kingdom, becoming the typical Anglophile Frenchman, addicted to good manners, tact and discreet humour. Except, of course, when he let himself go – revealing the difference between an Anglophile Frenchman and a true Englishman. So the prospect of a trip to London had overjoyed Danglard, migratory flows or not. He just had to get past the obstacle of the
fckin tnnl
: it would be his first experience of it.

Adamsberg rinsed out his coffee bowl, snatched up his suitcase, and wondered what sort of
jkt + tie
Danglard had chosen for him. His elderly neighbour, Lucio, was knocking loudly on the glass door, his weighty fist making it rattle. Lucio had lost his left arm in the Spanish Civil War when he was nine years old, and it seemed that his right arm had grown so large to compensate that it had the strength of two. Pressing his face to the pane, he was summoning Adamsberg by his imperious expression.

‘Come along,’ he said gruffly and peremptorily. ‘She can’t get them out, I need your help.’

Adamsberg stepped outside and put his suitcase down in the unkempt little garden he shared with the old Spaniard.

‘Not in thrrrreee days! Now!’ said the old man.

And when Lucio spoke in this tone of voice, rolling his r’s, he produced a great rumbling sound that seemed to Adamsberg as if it was issuing from the very earth. He picked up the suitcase, his mind already on its way to the Eurostar departure lounge at the Gare du Nord.

‘What can’t you get out?’ he said distantly, locking his front door.

‘The cat in the tool shed. You surely knew she was having kittens?’

‘I didn’t even know there was a cat there, and I certainly don’t care.’

‘Well, you know now,
hombre
. And no way will you not care. She’s only managed three so far. One’s dead and two others are still stuck, I can feel their heads. I’ll massage her belly, and you can pull them out. And be careful, gently does it. A kitten, you can break it in half like a biscuit if you’re too clumsy.’

Let the Sky Fall by Shannon Messenger
Liver Let Die by Liz Lipperman
The Big Green Tent by Ludmila Ulitskaya
Gloria Oliver by Cross-Eyed Dragon Troubles
On the Brink (Vol. 1) (The On the Brink Series) by Rhys, Erika
The Thin Woman by Dorothy Cannell
Saving Summer by J.C. Isabella
Twilight of the Eastern Gods by Ismail Kadare
Revolution World by Katy Stauber
The Nanny by Evelyn Piper