Read An Unquiet Mind: A Memoir of Moods and Madness Online

An Unquiet Mind: A Memoir of Moods and Madness 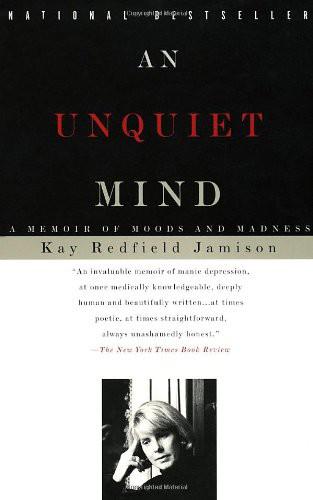 “Written with poetic and moving sensitivity … a rare and insightful view of mental illness from inside the mind of a trained specialist.”

“A riveting portrayal of a courageous brain alternating between exhilarating highs and numbing lows.”

“In a most intimate and powerful telling, Jamison weaves the personal and professional threads of her life together.… [She] brings us inside the disease and helps us understand manic depression.… What comes through is a remarkably whole person with the grit to defeat her disease.”

“A riveting read. I devoured it at a single sitting and found the book almost as compelling on a second read.…
An Unquiet Mind
may well become a classic.… Jamison sets an example of courage.”

“Stunning.… I have never read a more exquisite (in both a literary and medical sense) autobiography.… This is an important, wonderful book.”

“Piercingly honest.… Jamison’s literary coming-out is a mark of courage.”

“Extraordinary.…
An Unquiet Mind
must be read.”

—
The New England Journal of Medicine

“A beautiful, funny, original book. Powerfully written, it is a wonderful and important account of mercurial moods and madness. I absolutely love this book.”

—Pat Conroy, author of
The Prince of Tides

“A landmark.… The combination of the intensity of her personal life and the intellectual rigor of her professional experience make the book unique.… A vibrant and engaging account of the life, love, and experience of a woman, a therapist, an academic, and a patient.”

—Will Self,
The Observer
(London)

“Quite astonishing … cuts through the dead jargon and detached observations of psychiatric theory and practice to create a fiery, passionate, authentic account of the devastation and exaltation, the blindness and illumination of the psychotic experience.”

“Rises to the poetic and has a mystical touch … a courageous and fascinating book, a moving account of the life of a remarkable woman.”

“Fast-paced, startingly honest and frequently lyrical … [Jamison has] a novelist’s openness of phrase and talent for bringing character alive.”

Kay Redfield Jamison is Professor of Psychiatry at the Johns Hopkins University School of Medicine. She is the author of
Touched with Fire: Manic-Depressive Illness and the Artistic Temperament, Night Falls Fast: Understanding Suicide, Exuberance: The Passion for Life
, and coauthor of the standard medical text on manic-depressive illness, chosen in 1990 as the Most Outstanding Book in Biomedical Sciences by the Association of American Publishers. The recipient of numerous national and international scientific awards, Dr. Jamison was a member of the first National Advisory Council for Human Genome Research, as well as the clinical director for the Dana Consortium on the Genetic Basis of Manic-Depressive Illness. She lives in Washington, D.C.

Owing to limitations of space, acknowledgments for permission to reprint previously published material may be found on
this page
.

For my mother
,
Dell Temple Jamison

Who gave me life not
once, but countless times

I doubt sometimes whether
a quiet & unagitated life
would have suited me—yet I
sometimes long for it
.

Part One
THE WILD BLUE YONDER
Part Two
A NOT SO FINE MADNESS
Part Three
THIS MEDICINE, LOVE
Part Four
AN UNQUIET MIND

W
hen it’s two o’clock in the morning, and you’re manic, even the UCLA Medical Center has a certain appeal. The hospital—ordinarily a cold clotting of uninteresting buildings—became for me, that fall morning not quite twenty years ago, a focus of my finely wired, exquisitely alert nervous system. With vibrissae twinging, antennae perked, eyes fast-forwarding and fly faceted, I took in everything around me. I was on the run. Not just on the run but fast and furious on the run, darting back and forth across the hospital parking lot trying to use up a boundless, restless, manic energy. I was running fast, but slowly going mad
.

The man I was with, a colleague from the medical school, had stopped running an hour earlier and was, he said impatiently, exhausted. This, to a saner mind, would not have been surprising: the usual distinction between day and night had long since disappeared for the two of us, and the endless hours of scotch, brawling, and fallings about in laughter had taken an obvious, if not final, toll. We should have been sleeping or working, publishing not perishing, reading journals,
writing in charts, or drawing tedious scientific graphs that no one would read
.

Suddenly a police car pulled up. Even in my less-than-totally-lucid state of mind I could see that the officer had his hand on his gun as he got out of the car. “What in the hell are you doing running around the parking lot at this hour?” he asked. A not unreasonable question. My few remaining islets of judgment reached out to one another and linked up long enough to conclude that this particular situation was going to be hard to explain. My colleague, fortunately, was thinking far better than I was and managed to reach down into some deeply intuitive part of his own and the world’s collective unconscious and said, “We’re both on the faculty in the psychiatry department.” The policeman looked at us, smiled, went back to his squad car, and drove away
.

Being professors of psychiatry explained everything
.

W
ithin a month of signing my appointment papers to become an assistant professor of psychiatry at the University of California, Los Angeles, I was well on my way to madness; it was 1974, and I was twenty-eight years old. Within three months I was manic beyond recognition and just beginning a long, costly personal war against a medication that I would, in a few years’ time, be strongly encouraging others to take. My illness, and my struggles against the drug that ultimately saved my life and restored my sanity, had been years in the making.

For as long as I can remember I was frighteningly, although often wonderfully, beholden to moods. Intensely emotional as a child, mercurial as a young girl, first severely depressed as an adolescent, and then unrelentingly
caught up in the cycles of manic-depressive illness by the time I began my professional life, I became, both by necessity and intellectual inclination, a student of moods. It has been the only way I know to understand, indeed to accept, the illness I have; it also has been the only way I know to try and make a difference in the lives of others who also suffer from mood disorders. The disease that has, on several occasions, nearly killed me does kill tens of thousands of people every year: most are young, most die unnecessarily, and many are among the most imaginative and gifted that we as a society have.