Read And Kill Them All Online

And Kill Them All 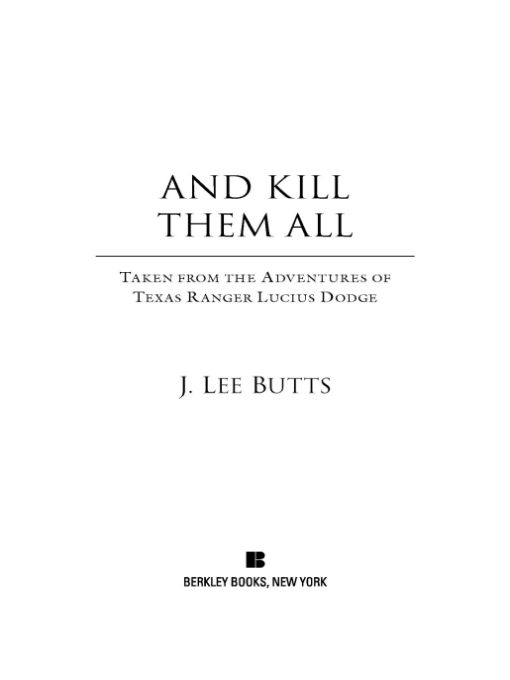 Table of Contents
Title Page
Copyright Page
Dedication
Epigraph
Acknowledgements
Â
Chapter 1 - “BLEW HIS THREE BIGGEST TOES CLEAN OFF.”
Chapter 2 - “. . . BLOW YOUR DUMB ASSES BACK INTO THE STREET . . .”
Chapter 3 - “MIGHT JUST SEND YOU TO JESUS MYSELF.”
Chapter 4 - “MEANER'N A BUCKET OF TEASED RATTLERS.”
Chapter 5 - “DAMN IRBY TEAL FOR A GOOD SHOT.”
Chapter 6 - “. . . MURDERED A BOATLOAD OF INNOCENT FOLKS . . .”
Chapter 7 - “SOMETHIN' REAL BAD'S A-WAITIN' FOR US . . .”
Chapter 8 - “. . . THESE POOR FOLKS BEEN SHOT SLAP TO PIECES.”
Chapter 9 - “SNAPPING AND BITING LIKE A RABID DOG.”
Chapter 10 - “MY DADDY DIDN'T RAISE ANY COWARDS . . .”
Chapter 11 - “. . . AND KILL THEM, ONE AND ALL.”
Chapter 12 - “. . . BLEW THE WHOLE TOP OF THE MAN'S HEAD OFF . . .”
Chapter 13 - “I'LL NOT HAVE YOU RIDE OFF AND LEAVE ME.”
Chapter 14 - “. . . COULD GET LUCKY. KILL THE WHOLE BUNCH OF US . . .”
Chapter 15 - “. . . USE YER PERFORATED HIDE FOR A FLOUR SIFTER . . .”
Chapter 16 - “DAMNATION, GIRL ...”
Chapter 17 - “. . . WALKED UP TO MISS CLEMENTINE AND TOOK HER PISTOL ...”
Chapter 18 - “DO YOUR WORST.”
Chapter 19 - “. . . WEBB GAVE HER TO EAGLE CUTNER.”
Chapter 20 - “WHERE WOULD CUTNER TAKE THE GIRL?”
Chapter 21 - “. . . A BAD ONE NAMED EAGLE âMAD DOG' CUTNER.”
Chapter 22 - “... THIS SPOT GIVES ME A CASE OF THE CREEPIN' WILLIES.”
Chapter 23 - “SCREW YOU LAW-BRINGIN' BASTARDS . . .”
Chapter 24 - “GO ON AND KILL ME.”
Chapter 25 - “... DON'T KNOW NOTHIN', AIN'T SEEN NOTHIN' . . .”
Chapter 26 - “... WE'VE SEEN MORE'N OUR SHARE OF BLOOD . . .”
Chapter 27 - “I'VE COME FOR MY NIECE.”
Â
SIXTEEN AND SET TO KILL . . .
From the corner of my eye, I saw the little pistol flash up in the girl's hand. Immediately recognized the weapon as a New Line .32-caliber pocket pistol.
For reasons I could not have explained to God, or anyone else, afterward, the fact that Clementine Webb had the barrel of a loaded weapon pressed to the end of the dying Roscoe Pickett's nose just didn't register with me for about half a second. When it finally dawned on me what was about to occur, I made an awkward, squatting lunge at the miniature shooter just as the gun went off. Burning powder singed my fingers when they wrapped around the weapon's tiny cylinder.
The little gal's well-aimed bullet hit Roscoe right in the mouth. A searing chunk of peanut-sized lead knocked all his front teeth out, carved a tunnel through the soft tissue at the back of his throat, and blasted its way through a spot in his neck just below the skull bone . . .
“Damnation, girl,” I yelped, then flicked a glance at Roscoe Pickett's shattered teeth, blasted skull, and sagging corpse. I shook my head in total disbelief, then locked Clementine in a narrow, steely gaze and added, “You've grown a mighty thick layer of hard bark around your heart since this morning, darlin'.”
Praise for J. LEE BUTTS
“J. Lee Butts keeps his readers on the edge of their seats.”
â
True West
Â
“A writer who can tell a great adventure story with authority and wit.”âJohn S. McCord, author of the Baynes Clan novels
Â
“One of the top writers of Westerns working in the genre today.” âPeter Brandvold, author of
Helldorado
Â
“Lawdog has it all. I couldn't put it down.”
âJack Ballas, author of
A Town Afraid
Â
“J. Lee Butts is one fine Western writer whose stories have a patina of humor; nonstop action . . . and a strong sense of place.”
â
Roundup Magazine
Berkley titles by J. Lee Butts
AND KILL THEM ALL
GUN WORK
HELL TO PAY
WRITTEN IN BLOOD
NATE COFFIN'S REVENGE
AMBUSHED
BAD BLOOD
A BAD DAY TO DIE
BROTHERHOOD OF BLOOD
HELL IN THE NATIONS
LAWDOG 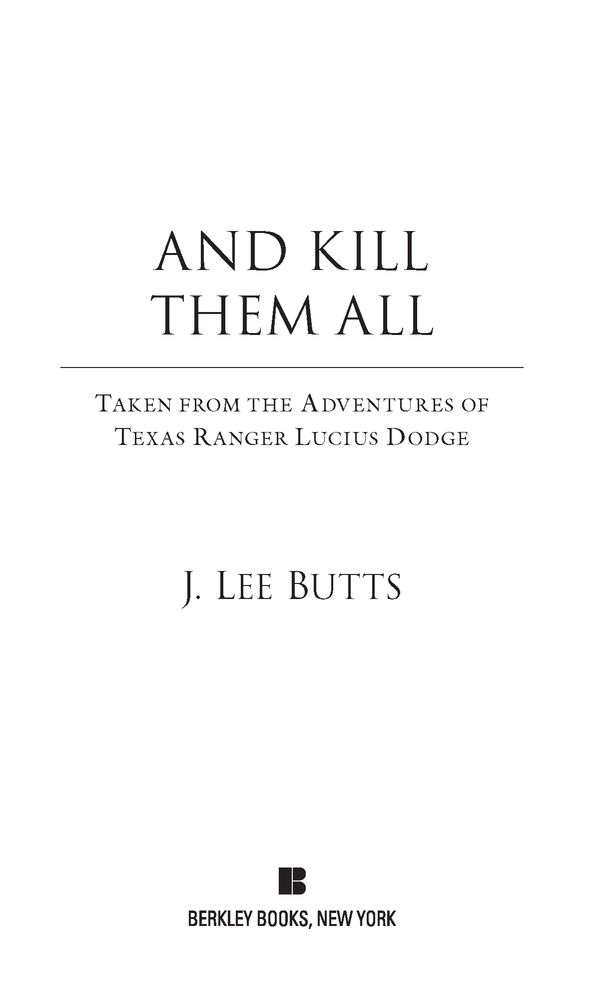 For My Wife, Carol
I am daily inspired by her strength, tenacity,
determination, and will to survive.
and
Â
For My Good Friend Linda McKinley
Perhaps my most enthusiastic cheerleader,
collaborator, and critic. She made me a better writer.
This is one of the few efforts I've produced
that doesn't have Linda's fingerprints on it,
along with her cat's tracks.
I will miss her more than mere words can tell.
O! My offense is rank, it smells to heaven;
It hath the primal eldest curse upon't,
a brother's murder.
â
Hamlet,
Act 3, Scene 3
Â
Â
The path of the just is as the shining light, that shineth more and more unto the perfect day.
âProverbs 4:18
Â
Â
What charm can soothe her melancholy?
What art can wash her guilt away?
â
The Vicar of Wakefield
ACKNOWLEDGMENTS
Special tip of the sombrero and bow at the waist for Sandy Harding. Perhaps the most personable and amiable editor I've had the pleasure to work with. And many thanks to Faith Black for her stellar help with this particular piece of work. Muchas gracias to Roxanne Blackwell Bosserman. She helped start me down this rugged trail years ago and still shouts encouragement from the sidelines when I appear ready to falter. And, as mentioned on the previous page, especially to my friend Linda McKinley. Not sure what I'm going to do without her editorial skills, advice, and willingness to spend hours discussing my writing. We made a good team. She's gone on ahead to scout the great unknown. I miss her every time I sit down at the computer.
PROLOGUE
AUTHOR'S NOTE TO THE READER
ATOP THE CREST of a tidal wave of unprecedented death and destruction, they poured into Texasâdesperate, hard as nails, the men of blood. Men who were forged in the crucible of America's bloody Civil War and tempered to the consistency of weapons-grade steel. Their conflict-acquired skills, stock, and trade often included brutality, murder, and a penchant for vicious mayhem. The unfortunate citizens who crossed the gore-drenched paths of those war-hardened gents referred to them as gun-men, shootists, gunfighters, or pistoleersâa grouping of benignly euphemistic terms that every man, woman, and child who lived between 1865 and 1900 understood to really mean
man killers.
The frontier West's slayers of men came from every sort of background imaginable. Prior to the great war of Yankee aggression on the South, many worked the land as hardscrabble farmers. At one time or another, some pursued employment as storekeepers, dentists, barbers, and butchers. Others worked as actors, doctors, lawyers, clerks, miners, buffalo hunters, Pony Express riders, or school-teachers. More than a few had once borne the badge of law enforcement officers.
Regardless of their previous backgrounds, upon arrival in the great Lone Star State, they plied whatever trade necessary to survive. In the process, a goodly number became double-dealing, card-marking, itinerant gamblers, swindlers, thugs, pimps, stock and property thieves, footpads, train and stagecoach robbers, con men, pickpockets, tricksters, rapists, murderers, and assassins of every stripe, variety, and type imaginable.
Life for such dangerous gentlemen (for the brotherhood of audacious hired gun hands, bandits, and charlatans proved almost entirely male) could generally be described as wicked, violent, and in most cases, extremely short. Death usually came for the men of blood by way of a gun or knife. And while a miniscule number of the most infamous slaughterers managed to die in their beds as the result of natural causes, or at the end of a legally applied length of oiled Kentucky hemp, most went to the judgment of their Maker surrounded by a roiling cloud of acrid-smelling, freshly spent gunpowder accompanied by the bitter, coppery taste of spilled blood.
A short listing of some of their names literally defines the
real
West in that period between the Civil War and the dawn of the twentieth century. Their grisly ranks included the likes of Luke Short, Longhair Jim Courtright, Clay Allison, Henry Newton Brown, Ben Thompson, and John King Fisher. Such man killers were the ill-famed contemporaries of Dallas Stoudenmire, Henry McCarty, the James boys, the Younger brothers, Jim Reed, Harry “The Sundance Kid” Longabaugh, Tom Starr, John Sellman, Harvey “Kid Curry” Logan, Sam Bass, and John Wesley Hardin. The worst of them all was the dignified, churchgoing assassin for hire, Deacon Jim Millerâalso know as Killin' Jim, a shotgun-carrying back shooter of the first water.
ADS
15.4Mb size Format: txt, pdf, ePub