And One Makes Three (Carnal Coeds) 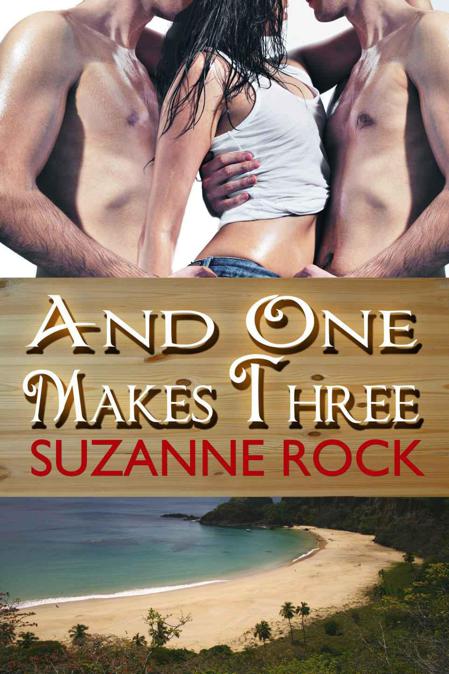 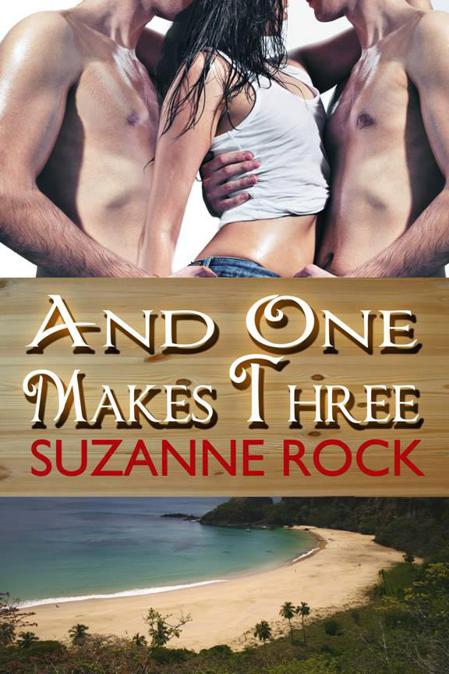 And One Make Three

And One Makes Three

Book #2 of the Carnal Coed Series

This book is contains excerpts that are works of fiction. While reference might be made to actual historical events or existing locations, the names, characters, places and incidents are either the product of the author’s imagination or are used fictitiously, and any resemblance to actual persons, living or dead, business establishments, events, or locales is entirely coincidental.

All rights reserved. This copy is intended for the purchaser of this book ONLY. No part of this-book may be reproduced, scanned, or distributed in any printed or electronic form without prior written permission from Suzanne Rock. Please do not participate in or encourage piracy of copyrighted materials in violation of the author's rights. Purchase only authorized editions.

Excerpt from Two Are Better Than One (Carnal Coed #1)

Bio and Other Works

As a child, Becca’s mom used to always tell her that happiness was like a winning the lottery. Both were nothing more than silly pipe dreams. Up until a few weeks ago, Becca would have agreed with that sentiment. Now, she wasn’t so sure.

Becca pulled her knees up to her chest and watched her former roommate, Hannah, play beach volleyball in the sand with her new boyfriends. Shy Hannah was one of those people who had all the luck. She had managed to snag not one but two Irish exchange students for her own. It was only a month into the relationship, but so far it seemed like things couldn’t be better for the trio.

Damn her.
Becca was the flirty one, not Hannah. Good grief, Hannah didn’t even date before Becca pushed her into Quinn and Declan’s arms. Life was so unfair.

“Staring at Quinn again, are you?” Gabe muttered under his breath. “I can see why. The man’s hot.”

Becca bit back a retort. It was just like her boyfriend to make some off-hand comment. He was always accusing her of watching other men or flirting. Gabe was hotter than a supermodel, but more insecure then a teenage girl on her first day in a new school.

Gabe covered his gorgeous hazel eyes with John-Lennon styled sunglasses and leaned in close to Becca.  The coconut scent from his sunblock mingled with the aromas of the ocean. “Declan’s hot too. They both seem happy with Hannah.”

Was that wistfulness in his voice? Becca smothered a frown. Most of the time Gabe was sensible, but every so often he’d make a comment that left her scratching her head.

“Yeah, Hannah’s really in love,” she replied. Becca hated feeling so jealous, but she couldn’t seem to help herself. While Hannah had two men enthralled with her every move, Becca and Gabe were struggling to patch up their damaged relationship. His insecurities were tearing them apart. Her jealousy of Hannah didn’t help either. If things continued down this path, their relationship wouldn’t last the summer. She didn’t want to lose Gabe, but she didn’t know how they could possibly bridge the growing gap between them.

Gabe lowered his hand and shifted uncomfortably beside her. “Damn, it’s hotter than Hades out here. I need something to drink. Want some ice cream?”

Becca turned to her boyfriend and forced herself to smile. “Nah, I’m okay.”

“Okay.” He started to stand but then changed his mind. “Is everything all right?”

He shrugged. “I don’t know. You just seem different today.”

Becca didn’t know what to say. She had no idea that her emotions were so revealing. “Not sad, just pensive,” she hedged.

“Pensive, eh?” He nudged her arm with his elbow. “Nothing bad, I hope.”

Where the hell did that come from?
Gabe was rather bland with sex the bedroom. He definitely wasn’t the sharing type. She shook her head and forced out a laugh. “No, are you?”

Gabe snorted. “Of course not. I was just wondering if you were, because…you know.”

She scowled in the awkward pause that followed. “No, I don’t know. Please tell me.”

He pressed his lips together for moment, as if choosing his words carefully. “You’re a flirt.”

Here we go again.
Becca sighed. “I don’t want to get into this with you. I’m just being friendly.”

She eased back from Gabe and glared at him. “Maybe I should go,” she said through clenched teeth.

“No, don’t go.” He grabbed her elbow as she started to stand. “I’m sorry I keep bringing it up. It’s a little unnerving, that’s all.”

“Yeah, it makes me feel, I don’t know…” He flipped his sunglasses to the top of his head and rubbed the back of his neck. “It makes me feel inadequate sometimes.”

Damn.
Why did the man have to be so astute? The problem with their relationship wasn’t just her flirting and his jealousy. It was that Gabe was—as he put it—inadequate. Although for the life of her, Becca couldn’t figure out where he was lacking. The man was kind, considerate, attentive…and boring. She sighed as she realized that part of her had already moved on from this relationship.

When Becca had brought up her relationship problems to Hannah, her friend had told her that she was afraid of commitment. It was possible, but Becca couldn’t help thinking that if Gabe was a little more exciting, then everything else would fall into place.

“Just forget I said anything,” Gabe said. “I didn’t want to ruin our day off.”

She wished she
could
forget everything. Unfortunately, Gabe put into words what Becca had been thinking about the last couple of weeks. She turned back to where Hannah played with Quinn and Declan in the sand. Maybe her expectations were too high. Perhaps she should stop wanting more and be content with what she had.

Hannah was living out Becca’s deepest darkest fantasy before her eyes. If her best friend could have two gorgeous men in love with her, why did Becca have to settle for one?

Gabe’s words gave her a lot to digest, and she couldn’t think with him hovering over her. “I think I want that ice cream after all.”

“Hey.” He hooked his finger under her chin and turned her head to meet his gaze. “I’m sorry about what I said. You know me. I like to shoot my mouth off sometimes.” He let out a nervous chuckle. “I didn’t mean anything by it.”

He smiled and kissed her lightly on the mouth. “Chocolate, right?”

“Yeah.” They had only been together for a couple of months, but Gabe had already memorized her favorite foods, clothing and movies. He knew just about everything about her. She, on the other hand, knew very little about him. She had never asked him questions because she had always seen the relationship as temporary.

Guilt washed over her as she watched his broad, muscular back as he walked away. She knew almost nothing about him besides the fact he was a chemistry grad student and his family came from old money in the South. He walked with this rugged cowboy-type stride that made her picture him in a large hat and spurs. She swept her gaze down his sculpted body to the navy boxer-style swimsuit covering his tight ass.

Perhaps she was being a little hard on Gabe. Most relationships weren’t as organic as Hannah’s seemed to be with Quinn and Declan. Intimacy took time to develop. She had only known Gabe for seven weeks, and in that time he had became more comfortable than her favorite slippers. Perhaps in time that missing spark would come.
Perhaps.

“Excuse me, ma’am.” A low voice rumbled from above.

Becca jerked back and squinted up at the intruder. What she saw took her breath away.

The man was at least six feet, possibly taller. His lean, athletic frame seemed unfamiliar to him, as if he was still getting used to it. He had a large crop of jet-black hair that would make any woman jealous and full, firm lips that pressed into a disapproving line.

“Sorry to disturb you,” he said.

“It’s okay.” She resisted the temptation to lick her lips and forced her gaze up from the bulge between his legs to meet his gaze.

He nodded to the small red and white sign over her shoulder. “You shouldn’t be sitting here.”

Becca glanced over to where he indicated and saw the temporary sign, half covered by branches of a nearby tree. “Oh, I’m sorry. I didn’t see it there.”

“It’s okay.” The man cleared his throat. “I can see how you’d miss it. It’s just that we’re going to be doing our drills here soon and need this space cleared out.”

Drills? Becca frowned at the large white cross on the red shirt stretched across his chest.

“Are you a lifeguard?”

He nodded. “I just transferred a few days ago from Harrisport.”

“Virginia.” He glanced over her shoulder at some fixed point behind her. “You better move. They’ll be coming soon.”

Becca glanced at the footpath a few hundred paces away. “I don’t see anyone yet.” She patted the towel next to her. “Have a seat for a moment. I’ll keep you company until they get here.” She didn’t want to disappear on Gabe while he was getting ice cream. Besides, there was some part of her that got a cheap thrill out of the possibility of him seeing her with another man, especially one as gorgeous as the lifeguard standing before her.

The lifeguard took a step back. Even with his sunglasses on, Becca could see his surprise. “I can’t. I’m working.”

She softened her features and flashed him a friendly smile. “Come on, I’m not going to bite you.” She patted the towel once more. “Just for a little bit.”

He hesitated then took off his sunglasses and sat next to her. “I really shouldn’t be doing this.” The man was simply breathtaking. Even now, with him sitting so close to her, she felt her temperature rise.

“What’s your name, stranger?” she asked.