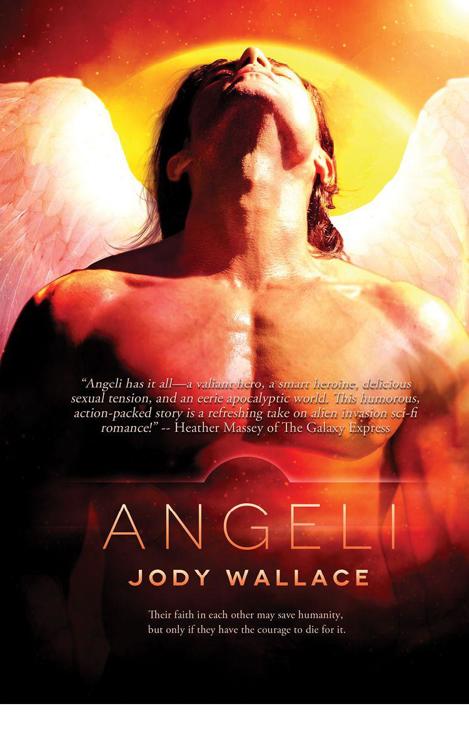 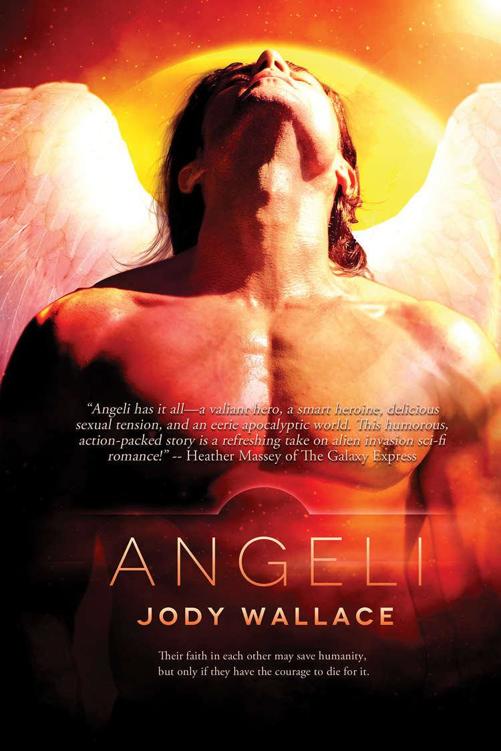 Gregori’s last mission is to save Earth from the demons threatening to take control. He doesn’t care if he survives as long as he averts the impending apocalypse—until he meets Adelita, a human refugee, whose spirit and determination give him a renewed reason to fight. And live. He’s falling for her, despite the fact he’s told her nothing but lies and there can’t possibly be a future for them.

Adelita can hardly believe the archangel Gregori, sent to save mankind, has lost his faith and his edge. After he saves her from a demon attack, she vows to help him recover both by any means necessary. But can she keep her own faith when she learns the truth about who and what Gregori really is?

Blood of the Demon

Copyright © 2014 by Jody Wallace. All rights reserved, including the right to reproduce, distribute, or transmit in any form or by any means. For information regarding subsidiary rights, please contact the Publisher.

Select Otherworld is an imprint of Entangled Publishing, LLC.

For Hal. You were misunderstood.

The Chosen One had failed. Utterly.

Was that what came from trusting a sentient spaceship to select the single Terran best suited to save an entire planet?

Gregori had never questioned Ship’s guidance before, but it had never been completely erroneous. A pretty but dim-witted actor, while known to more of his fellow Terrans than not, was simply not the best choice to perform a critical disruption of the alien entities’ invasion.

He blasted another black, nearly formless creature oozing out of the raw dimensional pinhole that the Chosen One hadn’t plugged. That rift between this dimension and the maelstrom dimension would be the downfall of this planet, a corridor for the endless horde of shades, daemons, and other entities that sought to devour all sentient life.

His life was devoted to stopping the horde, by any means possible.

Low-grade temblors shook the area, a city the Terrans called San Francisco. Buildings toppled as entities, immune to Terran ordnance, poured through the pinhole. There was little Gregori could do now but run, save himself and his team, yet still he blasted abomination after abomination, the fury inside him as all-consuming as the maelstrom working to consume Terra.

This couldn’t be happening here. Not here.

The crash and tinkle of glass in nearby buildings was a sharp counterpoint to the groan of the earth and hiss of invading entities. Gregori and his team alone remained in this area to face the attack. They’d been masquerading as Terran “angeli” while training the Chosen One and prepping the planet to weather the apocalypse. Between the pressure of the entities and the dimensional rift, the pinhole might activate the San Andreas Fault.

California wouldn’t slide into the ocean, as many Terran pundits had predicted, but it wouldn’t be pretty, either.

Gregori’s headset crackled as the team received orders from Ship, the sentient spacefaring vessel that was their transportation, their employment—their home. Advanced sentients in this dimension who chose to join the crusade against the horde lived on Ships of various types, some mobile and some dirtside, as long as that planet had achieved certain technological and sociological levels.

How the hell had this happened? Though Terrans were inclined to skepticism, enough had believed that Gregori’s people were angels and protectors instead of invading aliens. Their faith had cleared his team’s path. It had allowed them to do their jobs without warping the overall culture of the native population too much.

The procedure for halting a pinhole by masquerading as divine beings was tested. Honed. Gregori hadn’t lost a planet since he’d become captain of his team.

So why had it failed this time?

Gregori wished the miracles the Terrans believed in were true, because they could use one right about now. Wasn’t there anything he and his people could do?

“I do not detect a retreat,” the unemotional voice in his ear prompted. “Update your status please. Is there a complication?”

“We aren’t falling back yet,” Gregori answered. “We can avoid detection for now. The entities don’t yet know we’re here. Hold position, team. Blasters hot.”

Feet spread, he remained atop the abandoned vehicle fifty yards from the pinhole, the temblor rumbling his perch, his frustration rumbling with it. His mind scrambled for solutions. He squinted, took aim, burned another globular shade with weaponry the Terrans weren’t even close to developing. Its eerie cry whined past the limits of his hearing, which was considerable due to the enhancements given to Shipborn soldiers. All around him his team followed suit until the shades’ cries became an almost mechanical buzz, filling his head like a needle to the brain.

The harsh scents of transference and ozone bled through his personal force field despite the purifiers. Hunk of junk generator hadn’t worked right since the day it had been allocated to him. Sometimes it felt as if they’d been set up to fail on this mission, right down to their equipment.

“Watch your six, Captain,” someone warned through the headset.

What was on his…? Ah. Contracting his wings against his back, he swiveled and aimed at a hulking begetter drone. The giant, ovoid monsters had no faces, no limbs, no purpose except to help create the millions of shades that would eventually devour the surface of the planet. A zing wouldn’t be enough to take out that beast.

Heat seared Gregori’s arms as both of his weapon bands powered up. A broad white beam streamed from his palms, caught the drone in the midsection, and surrounded it with a glow. It burst, keening so loud it put the shades’ cries to shame. Once enough begetters transferred over from the maelstrom dimension, the area became impossible for anyone Shipborn to enter without dire consequences.

He shot another shade. Another. His team fired and cursed. The hatred was instinctive, driven into them after decades of training. He couldn’t lay eyes on an entity without wanting to evaporate it. They didn’t belong in this universe.

“Fall back, Team Alpha,” repeated the bland voice of Ship’s AI. “The hatching is complete. Evasion is crucial. Regroup at base.”

Dammit! The hatching should never have taken place. They should have trained the Chosen One harder. Better. At some point in the process, things should have gone right.

When the maelstrom entities first located a planet that contained sentients, they sent a scouting party of daemons and entities through regular space to find a suitable location for their lethal back door. There they planted the egg that grew into a specialized explosive that tore through the dimensional fabric. The result was a pinhole—followed by a horde of deadly entities.

The easiest point at which to disrupt the enemy’s timeline was when the egg was in its most unstable phase, within forty-eight hours before detonation. The Chosen One, selected from all the humans on Terra by Ship as being the most believable and likely individual to conduct the operation, had been sent to the egg to destroy it. Gregori’s team couldn’t risk going themselves because they had Shipborn DNA.

But the destruction of the egg hadn’t happened, and the explosion had created the pinhole.

Gregori hadn’t worked this hard, this long, to see this planet, teeming with sentient life, devoured by the maelstrom. And Ship wanted them to desert the Terrans to the rusty skills of the retrievers? When were retrieval teams, tasked with preserving the native genome, ever needed on a Ship whose record contained so few failures?

“This is cowardice,” Gregori muttered, not quite under his breath.

“Wisdom,” contradicted Nikolas, his second-in-command. “All it takes is one of us shooting a moment too late. They can’t be allowed to identify us.”

A problem with a simple solution. “Don’t shoot too late.”

The wide, paved area that used to be a parking lot had buckled. Gray concrete collapsed and bowed. Buildings shuddered. Near the center, barely visible through the entities, lay the puncture between this dimension and the maelstrom, the horde’s path to the life essence they craved. Gelatinous shades crept from that gateway in an unending stream. Eventually there would be nowhere on the planet to hide.

This was the first wave of entities. Soon the vulnerable pinhole would firm into a permanent nexus, complete with a force field and a kill zone. The mobile, ferocious daemons would arrive from the other side. If he and his team were careful not to get caught, they could still help this planet.

“I know we can’t get in there to close it right now,” he said to everyone, “but we can give the Terrans a fighting chance. Give ourselves time to come up with a fix. We need to stay, and we need reinforcements.”

“Invalid,” Ship said. “That tactic was attempted in previous sectors. Leviathan woken. All Ships were lost. All citizens were lost.”

Gregori knew the history. Knew the reason his people cut and run once a pinhole hatched—any time the enemy identified a Shipborn, everyone wound up dead within hours instead of months. All it took was one shade’s consuming one Shipborn for the horde to realize a Ship was in the vicinity, which inevitably spawned a massive entity called a leviathan—a creature that couldn’t be battled. Couldn’t be escaped, even by Ship at top speed.

The Italian's Bedroom Deal by Elizabeth Lennox
Summer of Sloane by Erin L. Schneider
Running in Place (Mending Hearts) by Simmons, L.B.
The Tale of Applebeck Orchard by Susan Albert
Held by Edeet Ravel
The Outcast Prince by Shona Husk
Bound by The Moon (The Bound Series Book 2) by JF Holland
Dublin Noir by Bruen, Ken
Abomination by Gary Whitta
Rage of Angels by Sidney Sheldon