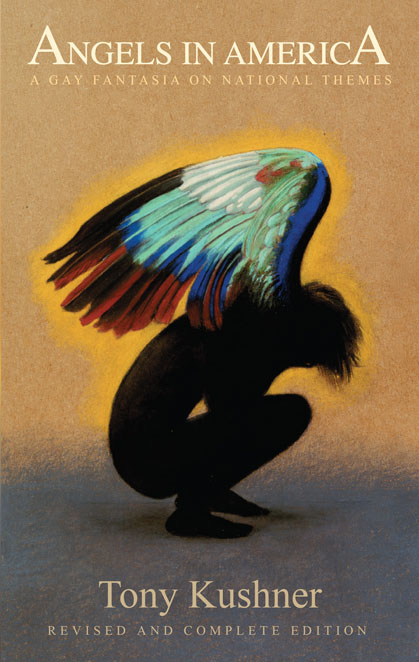 “
Angels in America
has proved to be a watershed drama, the most lyrical and ambitious augury of an era since Tennessee Williams's
The Glass Menagerie
.”

“Glorious. A monumental, subversive, altogether remarkable masterwork . . . Details of specific catastrophes may have changed since this Reagan-era AIDS epic won the Pulitzer and the Tony, but the real cosmic and human obsessionsâpower, religion, sex, responsibility, the future of the worldâare as perilous, yet as falling-down funny, as ever.”

“The most influential American play of the last two decades.”

“Daring and dazzling! The most ambitious American play of our time: an epic that ranges from earth to heaven; focuses on politics, sex and religion; transports us to Washington, the Kremlin, the South Bronx, Salt Lake City and Antarctica; deals with Jews, Mormons, WASPs, blacks; switches between realism and fantasy, from the tragedy of AIDS to the camp comedy of drag queens to the death or at least absconding of God.”

“Few plays have captured the spirit of an age more powerfully than
Angels in America
. . . and the passage of time has not clipped
Angels
' wings.”

“Something rare, dangerous and harrowing . . . a roman candle hurled into a drawing room.”

“
Angels
breaks all the rules to achieve the astonishing integrity of its vision . . . It is a play that has remained utterly of-the-moment.”

“That
Angels
came so close to the burning heart of the Zeitgeist left Kushner fearing he would never get there again. But in fact he has been there so often that he seems to have passed right through it . . .
Angels
, so much a cry in the dark about AIDS when it was written, seems now to be as much about the Earth's potentially fatal illness as gay men's.”

“The greatest American play of the waning years of the twentieth century.”

“An enormously impressive work of the imagination and intellect, a towering example of what theater stretched to its full potential can achieve.”

A Dybbuk and Other Tales of the Supernatural

Thinking About the Longstanding Problems of Virtue and Happiness:

Essays, a Play, Two Poems and a Prayer 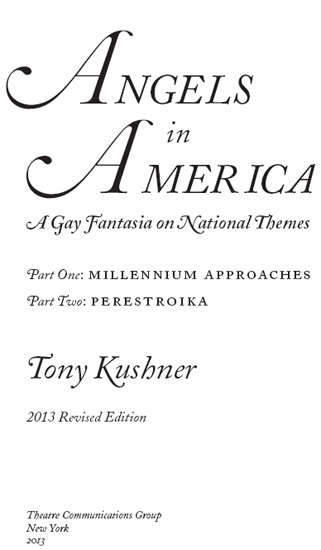 Angels in America: A Gay Fantasia on National Themes
is published by

All rights reserved. Except for brief passages quoted in newspaper, magazine, radio or television reviews, no part of this book may be reproduced in any form or by any means, electronic or mechanical, including photocopying or recording, or by an information storage and retrieval system, without permission in writing from the publisher.

Professionals and amateurs are hereby warned that this material, being fully protected under the Copyright Laws of the United States of America and all other countries of the Berne and Universal Copyright Conventions, is subject to a royalty. All rights including, but not limited to, professional, amateur, recording, motion picture, recitation, lecturing, public reading, radio and television broadcasting, and the rights of translation into foreign languages are expressly reserved. Particular emphasis is placed on the question of readings and all uses of this book by educational institutions, permission for which must be secured from the author's representative: Joyce Ketay, The Gersh Agency, 41 Madison Avenue, New York, NY 10010; (212) 634-8105.

The publication of
Angels in America: A Gay Fantasia on National Themes
, by Tony Kushner, is made possible in part by the New York State Council on the Arts with the support of Governor Andrew Cuomo and the New York State Legislature.

TCG books are exclusively distributed to the book trade by Consortium Book Sales and Distribution.

A Few Notes from the Playwright About Staging

With a Little Help from My Friends

I started writing in the early 1980s, at a moment in American theater when introductions and other presumably helpful apparatusesâincredibly detailed historical timelines, research documentation and theoretical notationâannounced the unapologetic embrace by narrative theater-makers of an intellectual and political seriousness that had previously been at home in European theaters and among American experimental theater artists. Dramaturgs arrived for the first time on the staffs of not-for-profit regional theaters; with the advent of production dramaturgy in America came a new deluge of prefatory and introductory information, served up from enormous black ring binders to the casts of plays as they sat around a table in the first days of rehearsal, and then offered to audiences in their theater programs. Formerly these programs were slim pamphlets containing lists of the production's personnel and short biographies, place and time settings, and restaurant
ads. Staff dramaturgs were now instructed to jam-pack programs with poetry, imagery, critical theory and facts, messages from the playwright, director and artistic director. Before they'd opened their programs, audiences most likely would have passed through lobby displays revealing the historical truths behind the fiction to which they were about to be exposed. I was enamored of this extra-theatrical informational bombardment. As a young playwright, I loved reading Shaw's prefaces, and I looked forward to having plays of my own to preface. I felt only slightly guilty observing theatergoers diligently, frantically trying to absorb this embarrassment of supplementary illumination before the house lights dimmed and the play began.

I've changed, and in recent years I've grown averse to anything that intrudes itself upon an innocent audience and the play it's about to watch, or an innocent reader about to read a play for the first time. If the playwright has done his or her job, if the production team and cast are doing theirs, the text of the play and the experience of watching or reading it should be sufficient unto itself.

The moment a play begins, or a reader takes in the words of the script on the first page, is as exciting and scary as any plunge into the ocean ought to be. Disappointment, bewilderment, outrage, great terror, pity and joy may follow, but these are only to be encountered once the plunge is made. Introductory material is for reluctant dawdlers and lag-behinds. A dusty grammar school usher and a sub-sub-librarian take many pages to tell you everything known about whales before each steps aside (well, before each dies, actually) to permit you to hazard the extremely perilous, mind-, heart- and molecule-altering voyage that is
Moby-Dick
, in the course of which voyage you realize that neither the usher nor the sub-sub, nor you, nor for that matter the crew of the Pequod nor their lunatic captain knows Thing One about what a whale is. When it's a
damp, drizzly November in your soul, Ishmael tells us, plunge in without preparation! The sea awaits!